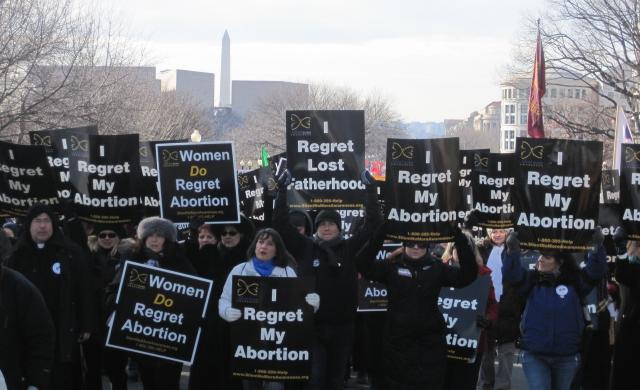 An analysis based on flawed data gathered from the years-old, debunked Turnaway Study minimizes abortion regret by claiming that women do not regret their abortions, despite many women who have said they do.

The new analysis, published in the journal Social Science and Medicine, was conducted by authors associated with the pro-abortion University of California, San Francisco’s Bixby Center for Global Reproductive Health, and Advancing New Standards in Reproductive Health (ANSIRH).

The analysis looked at the attitudes of 667 women “who sought abortions at 30 US facilities between 2008 and 2010.” Keep in mind that nearly one million women have abortions every year, so this sample size does not represent a large portion of women by any stretch. The authors conclude that past claims of abortion regret rely “on a framework founded on paternalistic, and often religious, beliefs about women’s ‘nature’ and supposedly innate maternal desire that constructs abortion as inherently stressful.” In other words, they completely dismiss the testimony of large post-abortion groups like the Silent No More Awareness Campaign.

At National Review, Dr. Michael New of the Charlotte Lozier Institute points out how the older Turnaway Study has been flawed from the start:

… [L]ess than 38 percent of the women they asked who had obtained abortions actually agreed to take part in the study. It seems likely that the women who made themselves available for the study might have had either a higher level of decisional certainty or fewer moral qualms about obtaining an abortion, skewing the results.

Additionally, the Turnaway study tracked study participants over a five-year time period. Over time, a significant percentage of the women who originally agreed to participate either could no longer be contacted or refused to answer follow-up surveys. The new Social Science and Medicine article tries to downplay this fact, stating that 71 percent of the women completed an interview in the final two years of the study. However, a 2017 article in JAMA Psychiatry that used Turnaway-study data indicated that only 58.4 percent of participants had responded to a survey five years after it began. This information further skews the results, as it is likely that women who disappeared from the survey were experiencing more psychological suffering than women who responded.

At the time of the Turnaway Study’s release, Live Action News reported on the thorough debunking of the study, and yet, pro-abortion groups keep resurrecting it to serve their own agenda.

Aside from poor methodology, what are some other reasons to doubt the validity of this recent study analysis?

#1: Those directing the analysis are funded by those who have a financial interest in expanding abortion.

The Turnaway Study claimed to find:

But other studies have found:

#2: The analysis authors are heavily invested in abortion.

#3: The funding for the new analysis came from foundations which promote worldwide abortion, and which fund the abortion pill’s manufacturer.

All of these same financiers funded the flawed Turnaway Study itself, according to a report from ANSIRH.

Of interest is the fact that for many years, UCSF’s Bixby program, where the authors have connections, and which conducted the Turnaway study, was also funded by these same three foundations.

While the media willingly touts the recent analysis and the Turnaway Study as solid evidence that there is no such thing as abortion regret, they fail to point out who conducted and funded the study. Imagine if the media only regurgitated positive marketing studies put out by other industries. It is unlikely you will ever find a study on how many consumers “regret” their purchase of a Ford, a GE refrigerator or an iPhone conducted by, funded by, or published by Ford, GE or Apple. But, we all know consumers who regret their purchases… and similarly, abortion industry studies conducted and funded by industry insiders must be examined with skepticism.

A federally funded, U.S.based study found a 65% higher risk of clinical depression in women who had abortions, after controlling for age, race, education, marital status, history of divorce, income, and prior psychiatric state. And according to a study listed on the National Institutes of Health website, women who abort are five times more likely to be involved in drug and alcohol abuse. It’s why a big part of Live Action’s work is encouraging those who have been hurt by abortion to know that healing is possible and to speak out against it.

If you are a woman who has been hurt by abortion, you can share your story by visiting The Justice Foundation.