Abortion pill investors are doing their level best to remove the FDA’s safeguards on the abortion pill. This would make abortion less safe for women. Why would they do this? Profit. Sadly, their potential profit motives and conflicts of interest are being ignored by mainstream media. Live Action News continues to uncover the collaborators pushing to expand abortion, and reveal how the media isn’t scrutinizing any studies put out by the abortion industry.

The latest abortion pill study is — like others — being funded by an original investor in the company that manufactures the abortion pill: DANCO Laboratories, LLC. Published by the Journal Obstetrics & Gynecology, the official publication of the American College of Obstetricians and Gynecologists — popularly known as “The Green Journal” — the July 2019 study, “Medication Abortion Provided Through Telemedicine in Four U.S. States,” was funded by the Susan T. Buffett Foundation (billionaire Warren Buffett’s foundation). Live Action News has documented several times that the Buffett and Packard Foundations were original investors in DANCO Labs. Billionaire George Soros (Open Society Foundations) and the California-based Kaiser Family Foundation also invested in the abortion pill. 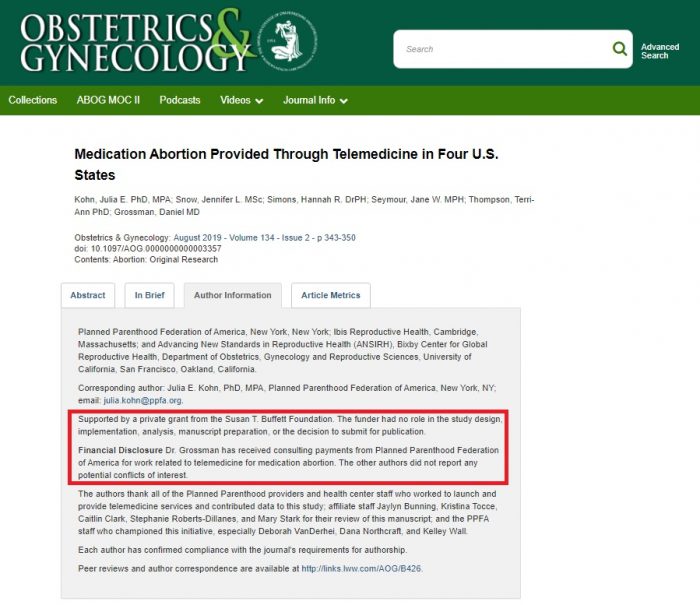 Co-author Daniel Grossman, MD (as seen in the screenshot above), is a known abortion trainer pushing to expand self-managed (at-home) abortions. Grossman is leading the charge to get rid of the Food and Drug Administration’s safety protocols on the abortion pill. He’s conducting several clinical trials to that end with support from UCSF, which trains abortionists.

Additional study authors are also employed by groups that profit from abortion:

The authors tried to hide the fact that the Buffett Foundation was funding their study: 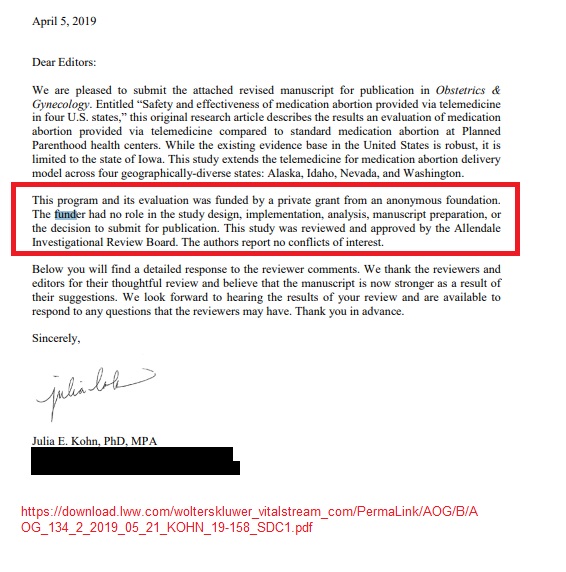 Unlike the Annals of Internal Medicine, which apparently allows study investors to remain anonymous if they’re pro-abortion, Obstetrics & Gynecology’s editor pushed back when the study authors tried to keep their investors a secret, writing in part, “The editor prefers that this information is disclosed. The problem of an anonymous funder is the concern for conflicts of interests.”

Looking at the information below, you can see why the authors wouldn’t want the public to know who was funding their study.

The pill was brought into the U.S. by the Population Council, a eugenics organization which sought out investors like The Packard Foundation to help keep DANCO afloat in 1996, when it “ran short on funds” and had “difficulty attracting investors.” The Buffett Foundation also gave funding for “the development of mifepristone [abortion pill].” Internal documents reviewed by the Wall Street Journal revealed that a number of other abortion pill investors chose to remain unnamed. Buffett still funds many abortion groups like Planned Parenthood. (Read more on the history of abortion pill manufacturer DANCO here.) 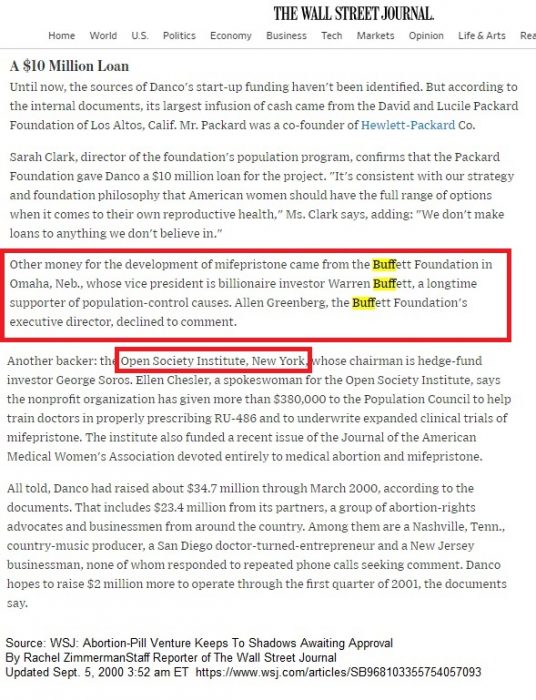 In 2000, the Washington Post wrote, “The Buffett Foundation… made at least $2 million in interest-free loans to the Population Council [which brought the abortion pill to the U.S. and started DANCO], according to tax documents filed in 1995. That money was in turn used to conduct clinical trials of RU-486 [the abortion pill].”

The abortion pill study got off on a dishonest foot right from the get-go, with the authors claiming, “There is consensus within the medical and scientific communities that induced abortion is a safe and effective health care procedure.” What? Consensus? Hardly. This claim is based off of a highly suspect 2018 “Consensus Study Report” from the National Academies of Sciences [NASEM]. This report was also conducted by abortion insiders dedicated to expanding abortion. And guess what? The Consensus study (like all the other abortion pill studies, it seems) was sponsored by wealthy population control/abortion enthusiasts: The Buffett Foundation, The JPB Foundation, The David and Lucile Packard Foundation, The William and Flora Hewlett Foundation, the Tara Health Foundation, and the Grove Foundation.

Every single study these researchers point to in order to support their so-called “research” is funded by population control/abortion enthusiasts. Study author Grossman pointed to another abortion pill study, co-authored with Kate Grindlay (a Director and Associate of the Free the Pill project at Ibis who previously worked for UCSF’s Women’s Global Health). That study was also funded by the Buffett Foundation as well as the Grove Foundation, which 1) Receives funds from the original investor of DANCO, the Packard Foundation, 2) Funds Planned Parenthood (and has for years), and 3) Funds the University of California San Francisco, which trains abortion providers.

Healthline didn’t question either study or its funding sources. 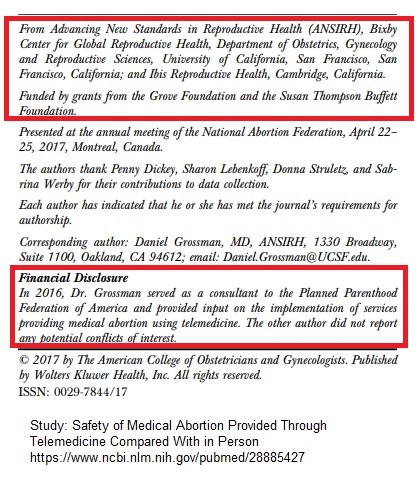 The FDA reports that as of the end of 2018, 24 women have died after taking the abortion pill (Mifeprex), and thousands have had serious complications. However, due to changes made in 2016 by the FDA, only deaths are now required to be reported, which means there is no accurate record of how many additional serious and concerning complications are occurring. In addition, women who experience abortion pill complications may visit emergency rooms with claims of “miscarriage” rather than return to the abortion facilities where they purchased the pills.

It is past time for the media to begin to raise serious questions:

Would the media be as quick to believe studies claiming smoking was safe, if they were funded by the manufacturers? Something to ponder.