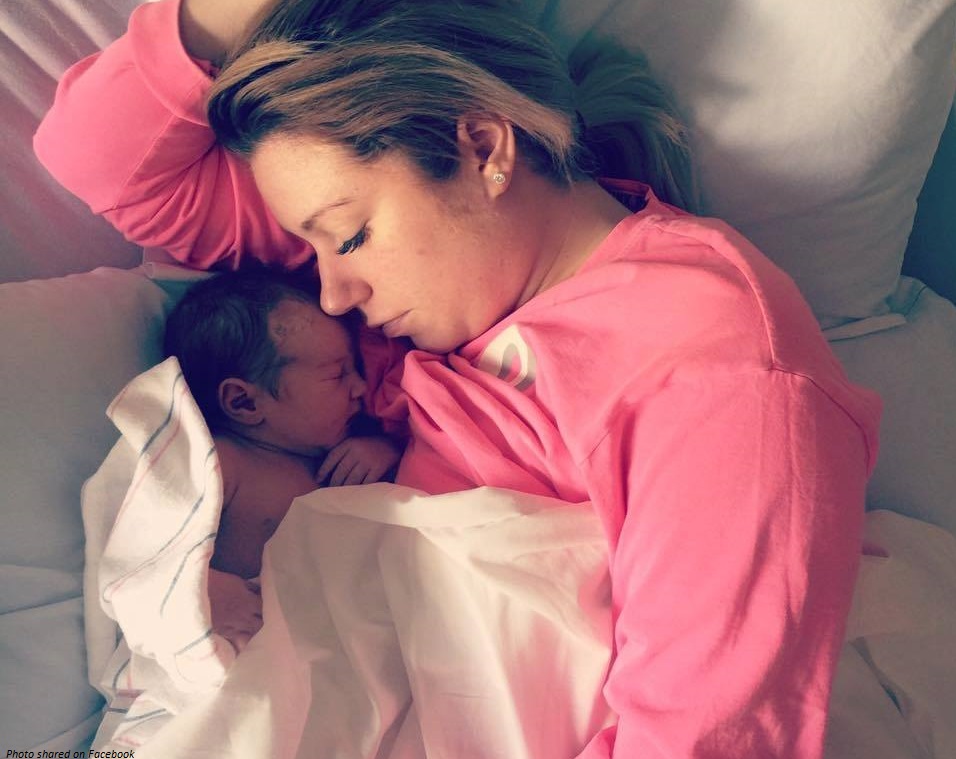 With the success of the movie “Unplanned,” a Massachusetts women is speaking out about her abortion experience, and the effect it had on her. Corinne Kimball wrote her story on Facebook of how she went to Planned Parenthood after experiencing an unplanned pregnancy.

“Growing up in a Catholic home, abortion wasn’t talked about,” she began. “I mean why would it be? I was supposed to be pure until marriage, duh. I was pro-life, so for years I kept my opinion about abortion to myself because I knew I WOULD NEVER do such a thing.” She said Planned Parenthood was her “best friend,” and that she was taking Plan B pills “like candy.” When she turned 22, she had just been offered her dream job, and was preparing to move. It was then that she realized she might be pregnant. She called her ex-boyfriend right away.

“I told him before taking the test, ‘I’m letting you know now before I even take this, I AM NOT GETTING AN ABORTION. So if I’m pregnant, we are having this baby,'” she recounted. “He wasn’t concerned and honestly was all for the baby. I came out of the bathroom and I was indeed, pregnant.” Terrified, she knew she had to tell her parents. “I felt I not only let myself down, but my entire family down, too,” she said. “Which is sad to look back on. My entire life leading up to this point, I was so career oriented. To have this new gig taken from me was something I wasn’t ready for. Though my parents were supportive with my pregnancy, I knew at 22 I was ultimately making the decision. The question I ask myself now is: Why was my career more important than a baby’s life? Looking back, it wasn’t.”

She decided she would have an abortion, and traveled to Boston for the procedure. Outside the facility, she said people were vicious, “like dogs ready to battle.” An escort helped her into the facility, keeping her from seeing the gruesome pictures of dead babies. Inside, however, the Planned Parenthood staff seemed kind and reassuring. The counselor, she said, was “gentle” and “very warm,” and explained her choices. “I could keep the baby, adopt, have a medical abortion, or surgical abortion,” she remembered. “I have all these choices, which sounds relieving and empowering, but at the same time… it was a lot to put on my shoulders.”

While Kimball said she was given lots of options, she also admitted that the counselor really only gave her one choice: abortion. “The woman was full of information about the abortion process but didn’t get into great detail about choosing adoption or keeping my baby,” she said.

In my mind, Planned Parenthood was a place for women to feel safe and get help without judgement—and it IS. That’s if you want to get an STD check, pregnancy test, or abortion. What about adoption? What if I wanted help to keep the baby? Not once did I get the feeling that if I had the baby, I would be helped or counseled, because if I did… I wouldn’t have gone through with the abortion. I was a privileged white girl, living in suburbia, with money and supportive parents—I could support this baby. I was screaming inside for someone to tell me it’s okay, go home, keep the baby, you got this. I never got that.

Her appointment was set for eight weeks, and though she felt guilty, she was intent on going through with the abortion. When it was her turn to go back, she said her mind felt “foggy” and her soul felt “empty.”

“I laid down on the surgical bed with an IV inserted, and the nurse asked if this was my first time,” she said. “I thought to myself, First time? People have more than one? before saying, ‘Yes, yes… this is my first time. I’m very nervous.’ I could hardly get the words out because I was trying to swallow back my puke. ‘You’ll be fine, this medicine will calm you down. The doctor will be gentle and this will all be over within minutes.'” Kimball said she didn’t know what was put into her IV, but it helped her forget what was about to happen, and that suddenly, she was on “cloud nine.”

“The doctor came in, and I don’t remember him saying anything to me — I was drugged up at this point, floating in my own sky of clouds,” she said, continuing, “The suction is what woke me up from cloud 9. He sucked up my baby. It was over.” Afterwards, she was taken to a recovery room, which she said she would remember forever. “Girls ranging from 15 to their late 30s were all lying down in their beds. Some with smiles of relief, others crying, and others staring at the wall. We all just had abortions,” Kimball recalled. “Leaving 15 minutes later, I was a free woman. It was my right. I chose. How I felt later, though, wasn’t my choice.”

For years, she struggled with guilt and pain from her abortion. She frequently thought of suicide, and cried when she met babies her friends had given birth to. She said she joked about the experience to mask how she really felt — until she got pregnant again. This time, she was firm in her choice to keep her baby, and because she thought her experience at Planned Parenthood had been a good one before, she turned to them again.

They weren’t only about abortions, right? I call and ask the woman on the phone to make an appointment for an ultrasound — I wanted to see how far along I was etc. I needed help as a new single mom. I call the clinic and a woman picks up the phone. She told me I couldn’t be taken in for an appointment saying, “We don’t do ultrasounds unless you are leaning for abortion or having a troubled pregnancy.”

Wait, what? I hung up the phone and cried for a good 30 minutes. I thought maybe this woman had a bad day? Maybe she was giving me incorrect information? Maybe she was a horrible employee? I had no idea. What I did know is I gave money to this organization for years and would praise them to my church, telling my pastors they were wrong about PP — but really I was wrong. They didn’t take me in.

Kimball gave birth to a little girl she named Rey, and struggled with depression afterwards. “I held her close thinking crazy thoughts — I could’ve had the other baby. How could I have killed that life?” she asked herself. “If I had the baby, would Rey even be here? Finding a therapist helped ease these painful thoughts. I’m beyond thankful I had the support of my family to take me in during a time of need, and I realize not everyone has that.”

She realized that she had not known there were places she could go to help her keep her baby, and that if she had known, she would have gone there instead of Planned Parenthood. And for women who have had abortions or are considering one, she has a message. “I am NOT here to judge anyone,” she said. “What I am here to do is share the message to women in crisis that you are NOT alone. You ARE loved and so is the baby growing inside you. There IS HOPE! … [B]y telling my story, I hope I can help girls out there who are feeling alone or confused.”