Over the past several years, the abortion industry has rolled out numerous schemes to expand access to the abortion pill. Live Action News has recapped many of these below.

Abortion industry insiders are seeking to lift an important FDA safety regulation on the abortion pill (mifepristone or Mifeprex) called REMS and expand its use through self-managed and DIY abortion. In fact, well before the pandemic, the industry expanded its abortion pill clinical trials and then rolled out a “no test” abortion pill protocol, which some medical professionals have said endangers women.

This demedicalized scheme not only removes important labs, tests, and in-person examinations or counseling, but also puts the responsibility of seeing the remains of the child and disposing of those remains squarely on the teenager or woman taking the pills.

In other words, while the abortion industry morphs itself into a group of call centers and drive-thrus, pocketing a great deal of money in the process, the abortion client will inevitably bear the real cost.

Abortion insiders are openly committing abortions past the approved FDA gestational age limit of 70 days (10 weeks) in violation of the REMS safety requirement, knowing that the failure rate of the abortion pill increases with gestational age.

For example, Planned Parenthood’s website makes it clear that the abortion corporation is not abiding by FDA limits and is advertising the deadly pill regimen to 11 weeks – past the FDA-approved limit. At that point, the failure rate jumps to 13% — nearly double the failure rate for the abortion pill given just two weeks earlier.

Then, when the abortion pill fails, women often are told to return for additional drugs or a surgical abortion. In addition, the industry also advises women experiencing a chemical abortion complication to report to an emergency department and claim they are experiencing a natural miscarriage.

This kind of deceptive action will distort the true numbers of complications which are already sparsely collected. To date, there is no federal requirement within the United States to report any abortion complication.

Pharmacy dispensing: Under the current REMS (temporarily suspended for the duration of the COVID-19 pandemic), the abortion pill must be dispensed in-person by a certified prescriber and not in a pharmacy or over-the-counter. Yet, former NARAL board member and abortionist Daniel A. Grossman, who has ties to at least one organization funded by abortion pill manufacturer Danco Laboratories, has been busy conducting clinical trials for pharmacy dispensing.

Grossman’s in-person pharmacy scheme and mail order trial are both tied to the University of California, San Francisco (UCSF), a training ground for abortionists. He is also planning to test “dispensing mifepristone via a mail-order pharmacy.”

TelAbortion (mail order): This Trojan Horse mail order abortion pill concept was sponsored by Gynuity Health Projects (GHP), a group funded by organizations with deep historic ties to the American eugenics movement. The so-called Direct-To-Consumer scheme was created to enable the abortion pill to be sent via mail after a TelAbortion or telemedicine interview.

Results of the Telabortion plan (which implemented more stringent safety requirements than usual) revealed that six percent of “known outcomes” from the abortion pill were severe enough to result in emergency room or urgent care visits, with additional women experiencing serious adverse events. They mirror those recently found by researchers in the U.K.

If we extrapolate that number out nationally using figures based on the Guttmacher Institute’s 2017 total of 339,640 chemical abortions, this could result in nearly 20,380 women per year seeking care at an ER or urgent care facility after taking the abortion pill.

Under the guise of the COVID-19 pandemic, the Biden-Harris administration’s FDA has temporarily allowed the abortion pill to be dispensed online by approved prescribers. As a result, there has been an explosion of online abortion pill dispensaries, with philosophies that better resemble back-alley abortion businesses than actual health care. Currently, there are no laws that specifically regulate virtual abortion pill dispensaries like brick-and-mortar abortion facilities, and for that reason, women should be extremely cautious.

Live Action News has identified several of these questionable dispensaries:

DKT is funded by the Bill and Melinda Gates Foundation and may be the marketing company behind pills that are being illegally shipped from India to the U.S. Harvey, along with DKT’s CEO Christopher H. Purdy, serve on the board of U.S. abortion chain Carafem, whose corporate name FemHealth USA, Inc. appears to be a DKT affiliate, according to DKT’s latest financial audit.

Despite a previously issued cease and desist letter, Aid Access continues to ship abortion pills into the United States in defiance of FDA warnings. A spokesperson for Aid Access recently claimed they have “nine US Providers” serving in “18 states” while the group’s founder Rebecca Gomperts provides abortion pills in the rest of the states.

Aid Access is also openly advertising its willingness to ship abortion pills to women who aren’t even pregnant and even asking women who fill out their online consultation form if they would be “interested in sharing your [their] with a journalist”. 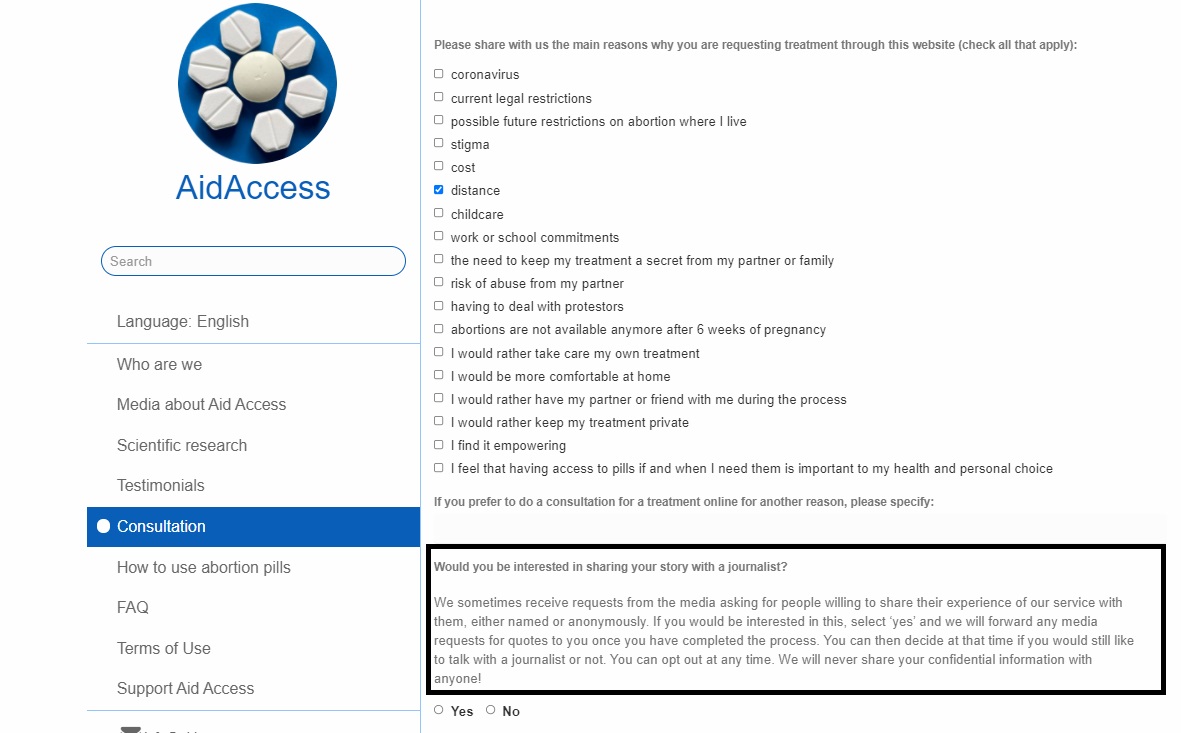 A woman in Texas who ordered from Aid Access recently told The Insider she ordered a “set of pills” in the event that “she or a friend needed an abortion in the future,” The Insider reported.

In addition, PlanC, a referral abortion pill website, was used by a Texas woman to add abortion pills to her “arsenal.” She recently told KVUE she was not pregnant but was stockpiling abortion pills “[f]or a woman, a friend, a family member, a neighbor who is in need and needs these pills.”

In the video below, the news outlet acknowledged the woman purchased “three prescriptions of mifepristone and misoprostol.”

Interestingly, PlanC warns women of the “potential risks of using” Aid Access, since their pills are “generic versions of the medication which are shipped from an Indian online pharmacy.”

Abortion industry schemes to expand access to the abortion pill have also included proposals for “advanced provision” of the pills before pregnancy, misoprostol only for abortion, dangerous second trimester abortion pill experiments, and even illegal distribution of the drug — all while pressuring Big Tech to censor information on abortion pill reversal (APR), a protocol which involves administration of the time-proven hormone progesterone, which has been credited with saving thousands of lives.