The abortion industry recently introduced a “no-test” abortion protocol, enabling abortion profiteers to dispense the abortion pill while conducting no lab tests or ultrasounds beforehand to determine gestational age or rule out ectopic pregnancy. The industry is using the COVID-19 pandemic to its own advantage, quickly expanding access to the abortion pill and placing women’s lives at risk.

Gynuity Health Projects published the protocol, part of an expansion effort that began long before the COVID-19 pandemic.

However, Gynuity claims that COVID-19 ” triggered an acute need to minimize the time that patients spend in medical facilities and to reduce physical contact between patients and providers” and that the protocol was developed “[i]n response to this need.” This “sample protocol for providing medication abortion without any routine facility-based tests either before or after treatment… includes recommendations for patient selection, Rh status evaluation and management, the treatment regimen, and follow-up without facility-based tests….”

On April 16, authors of the “no test” protocol published a collaborative commentary in the Journal Contraception. Authors include medical directors from Gynuity, the National Abortion Federation (NAF), Planned Parenthood of Massachusetts, and Planned Parenthood Federation of America. Of note on this list are Dr. Daniel Grossman and Mitchell D. Creinin (a consultant for abortion pill manufacturer DANCO Laboratories, receiving consulting fees and an honorarium from DANCO). 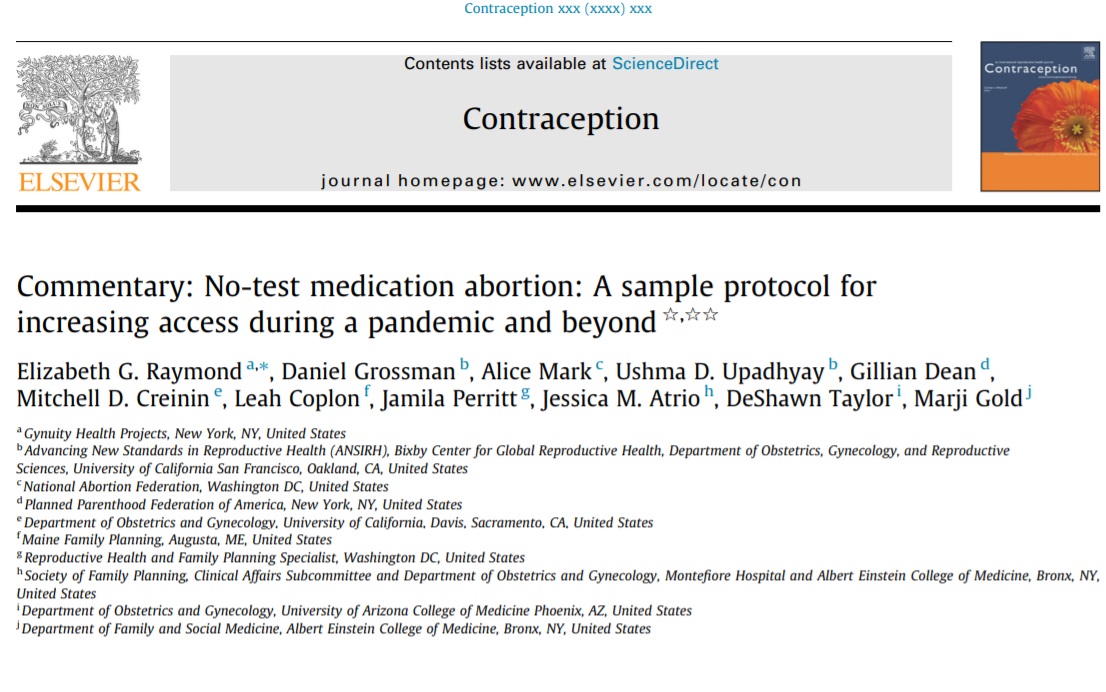 Grossman is behind the push to expand ‘self-managed’ abortion via two clinical trials for pharmacy dispensing. He is a member of the Editorial Board of the Journal Contraception, where he publishes his abortion studies. Grossman also sits on the board of Whole Woman’s Health abortion chain and served on the board of NARAL. In addition, he is on staff as a Senior Advisor at Ibis Reproductive Health, which is funded by The Packard Foundation (an abortion pill investor) and by abortion pill manufacturer DANCO Laboratories.

According to the Contraception article, the protocol was developed to “enable safe and effective provision of medication abortion without a mandatory pre-treatment ultrasound, pelvic examination or laboratory tests when medically appropriate, given that these tests may be significant barriers to access and, in the setting of a pandemic, may increase transmission of infection to patients and health care workers.” (emphasis added) The protocol consists of a verbal consultation with no physical contact and no labs or examination, after which the woman must visit the abortion business to pick up abortion pills.

The “no test” protocol allows for abortion up to 77 days, even though the FDA currently limits the abortion pill to 70 days (10 weeks). The burden is left upon the woman, not the abortionist, to estimate the preborn baby’s gestational age based on last known menstrual period. If a woman misstates or miscalculates her last menstrual period, an incomplete abortion becomes is more likely as gestational age increases. This could necessitate a follow-up surgical abortion to prevent infection. The abortion business will profit from the abortion pill’s failure as well as the follow-up surgical abortion.

“We chose a 77-day limit because recent data have indicated that outpatient [chemical abortion] is safe and effective through that [gestational age],” the authors wrote in Contraception, claiming this is “consistent with current guidelines of the National Abortion Federation and Planned Parenthood Federation of America (personal communication, Gillian Dean, MD, MPH, Planned Parenthood Federation of America).” While the authors seem to ignore the FDA’s authority, they do acknowledge that “2014 guidelines issued by the American College of Obstetricians and Gynecologists (ACOG) and the Society for Family Planning as well as the mifepristone label approved by the US Food and Drug Administration in 2016 specify a 70-day limit….”

Even Planned Parenthood, which commits 40 percent of all U.S. abortions, acknowledges that the failure rate of the abortion pill increases with gestational age. “For people who are 10-11 weeks pregnant, it works about 87 out of 100 times,” they state, unless the woman is “given an extra dose of medicine.” See below: 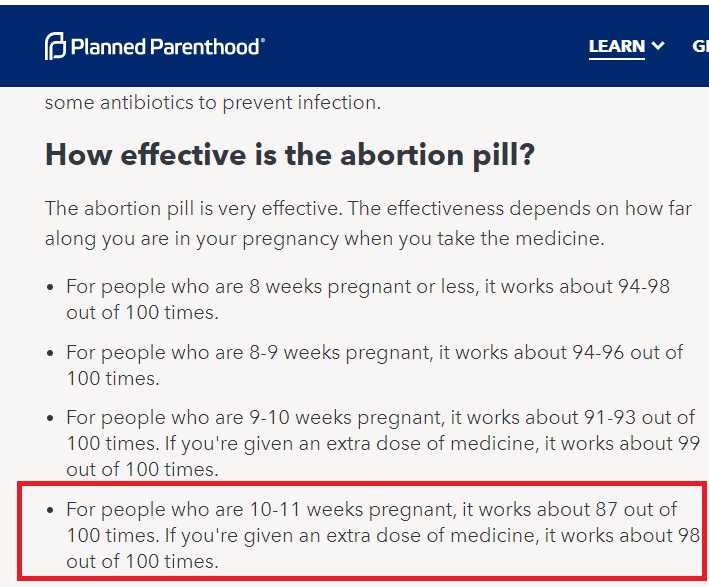 While the Journal Contraception article claims “[t]he sample no-test protocol excludes patients with significant symptoms of or risk factors for ectopic pregnancy,” it also states, “We recognize that the listed criteria will not identify every patient with ectopic pregnancy….” The article authors then suggest that if an abortionist fails to rule out a woman’s ectopic pregnancy because of the “no test” protocol, “the condition can be detected and managed afterwards.”

Ectopic pregnancy is a life-threatening condition that can result in maternal death if not detected in time, and the FDA’s REMS safety requirements specify that abortion pill prescribers must be able to properly diagnose the condition.

Regarding a patient’s blood type — specifically the possibility that the pregnant woman is Rh negative — the protocol states that Rh testing is “[n]ot needed if the gestational age on the anticipated mifepristone ingestion date will be <70 days or if the patient reports positive Rh type, wants no future children, or declines anti-D immunoglobulin.” 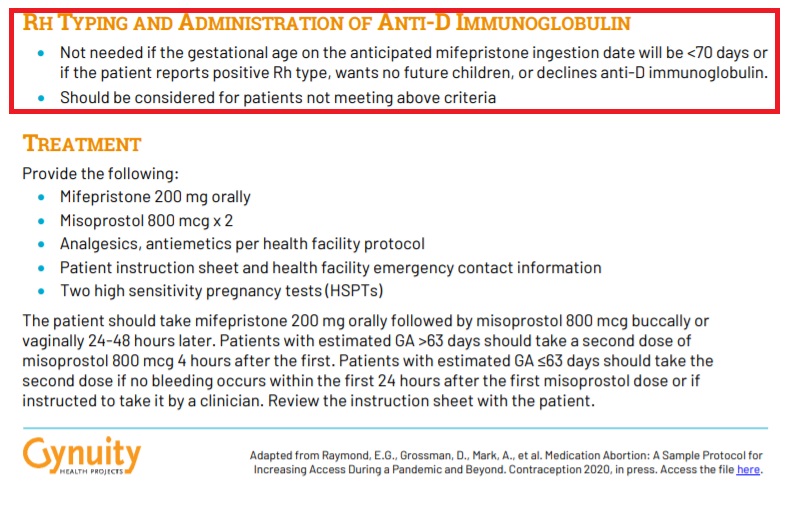 In 2018, NAF’s clinical guidelines said that “all patients with unknown Rh status” must be tested before an abortion. But in 2020, NAF’s new guidelines — published prior to the launch of the no-test protocol — changed these recommendations, claiming, “It is reasonable to forego Rh testing and anti-D immunoglobulin for women having any type of abortion before 56 days. Foregoing Rh testing and anti-D immunoglobulin for those using medication abortion before 70 days LMP may also be considered.” 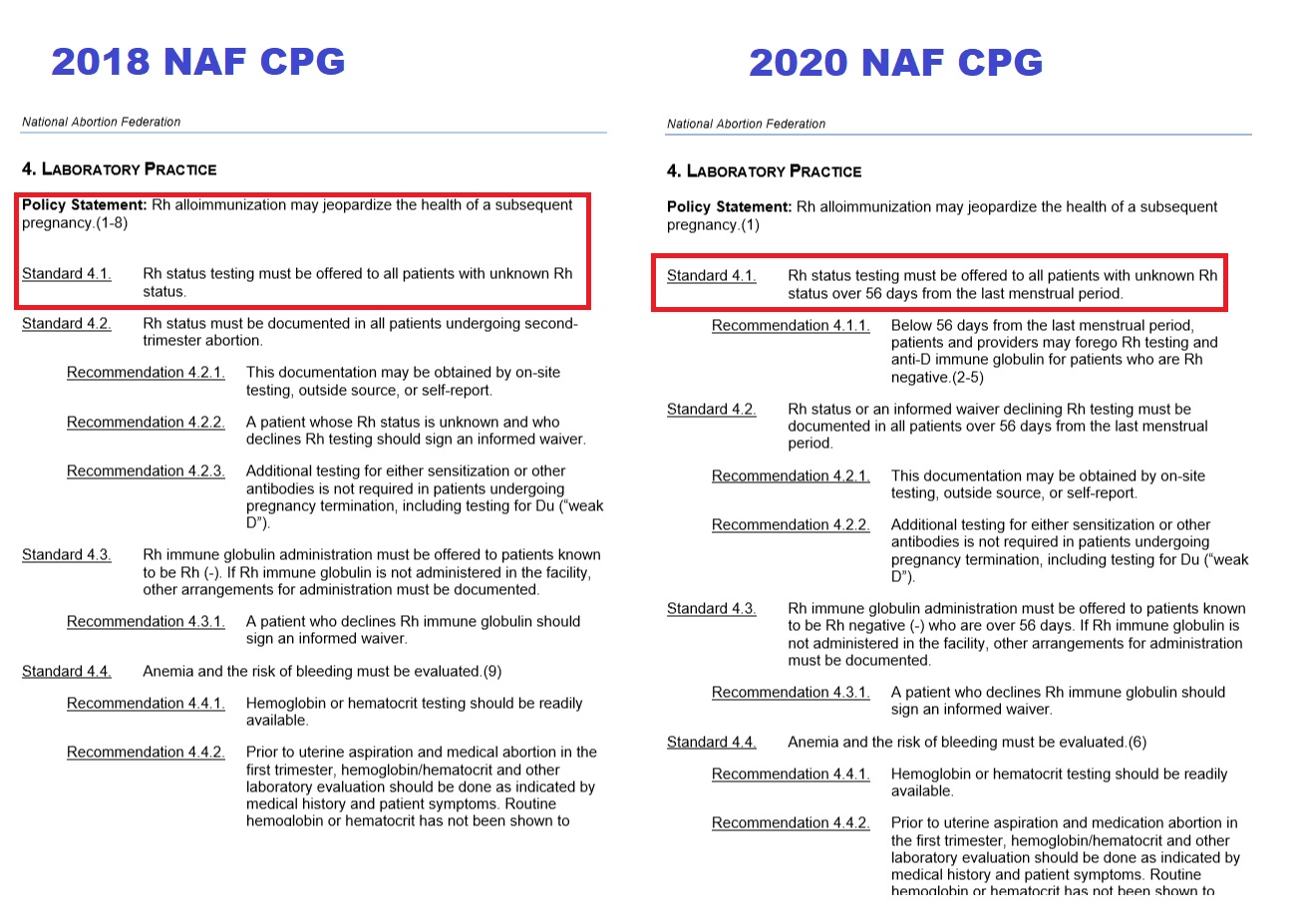 In May 2019, some of the Contraception journal authors admitted, “Early abortion continues to expand outside of traditional clinics, through telemedicine, self-managed medication abortion, or in smaller offices that do not specialize in obstetrical care. Consequently, requiring Rh testing and anti-D immunoglobulin as part of abortion care is becoming a barrier” to abortion access. (emphasis added)

The decision to eliminate testing and “believe the patient” instead has the potential for serious complications — something the authors barely mention:

… [E]ach patient should be explicitly informed that LMP-based dating may underestimate GA, in which case efficacy may be lower than expected, bleeding and cramping may be heavier, and, rarely, fetal tissue may be visible. Moreover, patients should understand that without ultrasound, ectopic pregnancy will not be definitively excluded before treatment.

However, the authors downplay the risks, stating that “patients should be advised… that serious adverse events of no-test abortion are expected to be rare and that side effects… can often be managed remotely. To avoid unnecessary infectious exposure during a pandemic as well as excess cost and inconvenience, patients should contact the abortion provider before seeking in-person care.”

The authors make clear that the move to eliminate testing is to decrease costs and to “enable provision of abortion in new venues and by new categories of providers, and… facilitate new service delivery models” — and they admit this method is here to stay “even after the current epidemic resolves.”

In part three, Live Action News will share more proof that the “no test” abortion pill protocol has been in the works for a long time, despite claims that it is being implemented due to COVID-19.