Dr. Daniel Grossman, an abortionist with ties to an organization recently funded by the abortion pill’s manufacturer, has been busy promoting the unapproved and dangerous idea that abortionists should give women the abortion pill before they are even pregnant.

Grossman currently serves  as senior adviser at Ibis Reproductive Health which — as recently as 2020 — was directly funded by the abortion pill’s manufacturer, Danco Laboratories and is currently funded by the Packard Foundation, a large investor in Danco. Grossman’s latest scheme to expand the use of the abortion pill has been dubbed “advanced provision of medication abortion.”

Grossman laments FDA safety protocols as “out of touch,” while pushing for

In February of 2019, Grossman began “mixed-methods study” entitled “Advanced Provision of Medication Abortion” which sought to follow “a prospective cohort of participants receiving Mifeprex® (mifepristone) by a clinician in advance of a potential unintended pregnancy.” What this 2019 trial proves is that the push for over-the-counter (OTC) and “advanced provision” of the abortion pill had nothing to do with the Texas Heartbeat Act (SB8), which did not take effect until 2021.

The so-called “pilot study” was sponsored by the University of California, San Francisco (UCSF) where Grossman works (heavily funded by Danco investors). It enrolled zero patients, but initially intended to measure the “feasibility of implementing a larger randomized controlled trial” until it was swiftly withdrawn. A reason for the withdrawal was not specified.

Grossman recently resurrected the idea in a tweet to his followers, where the former NARAL board member wrote, “Advance provision of medication abortion means giving or getting the pills (mifepristone and misoprostol) in advance of need — before an unwanted pregnancy….”

In the same Twitter thread, he wrote, “[…]there are some people who are not good candidates… including those taking blood thinners or who have a bleeding disorder.” Hemorrhage during the process of expelling the preborn child is a potential complication of the abortion pill regimen. Grossman later specified that women at risk of ectopic pregnancy and other conditions are not a “good option” either. 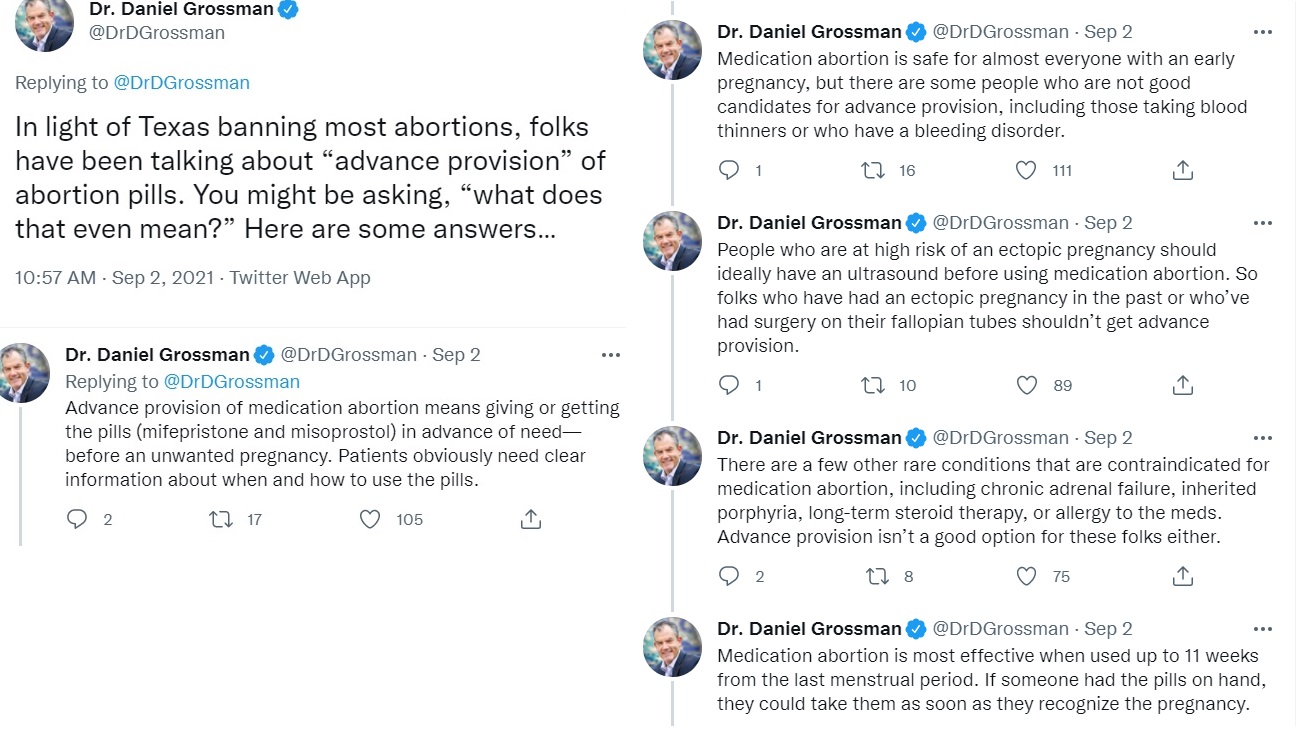 Despite the dangers, the abortionist is going full speed ahead with promoting this dangerous scheme, even spelling out how it could be done — in direct violation of the FDA’s REMS safety protocol.

Writing in the LA Times, Grossman stated, “The idea is simple: Give women abortion pills before they need them — ‘advance provision,’ as it’s known — so that they can take them as soon as they discover a pregnancy. Women could get the pills from their gynecologist at the time of their annual exam, say, or the pills could be made available online.” 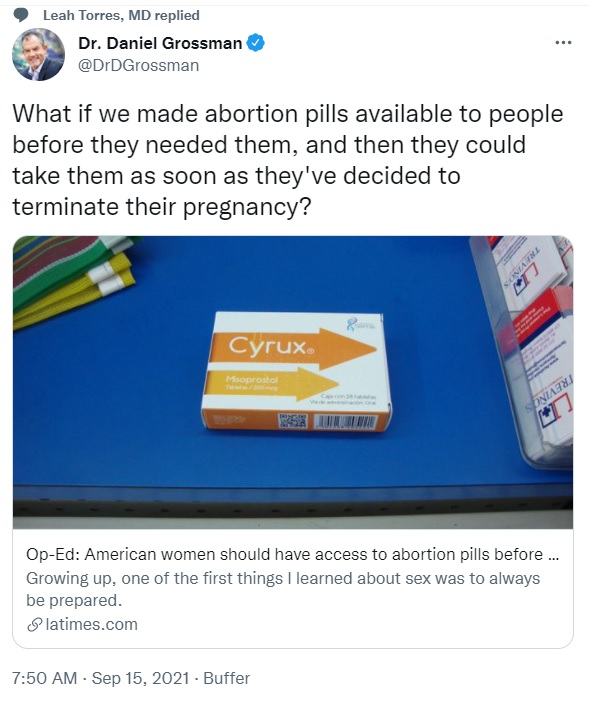 “There’s at least one significant obstacle, however. The Food and Drug Administration has not approved abortion pills for advance provision,” Grossman added. “The agency doesn’t even allow clinicians to prescribe mifepristone, one of the two drugs that make up medication abortion, for pick-up at a pharmacy.”

He then claimed that the FDA’s safety requirements are “out of touch with patient preferences and medically unnecessary.” Conveniently, the research Grossman used to cite his claims just happened to be co-authored by him and was funded by an investor in Danco, the abortion pill manufacturer.

Grossman cited a survey of 7,000 women (between the ages of 18–49) conducted to determine the “personal interest in and general support for… [abortion pills] (1) in advance from a doctor for future use, (2) over-the-counter (OTC) from a drugstore and (3) online without a prescription.”

The survey found that less than half of the 7,000 participants (49%) supported these ideas and he claims that 30% “were personally interested in one or more of the three access models; 44% supported advance provision, 37% supported OTC access, and 29% supported online access.” Interestingly, only 24% of the total number of survey participants were under the age of 30 — with the largest number of participants over the age of 40.

The survey was funded in part by the The David and Lucile Packard Foundation (which invested $14.2 million to start Danco in its early days and now invests millions in the generic manufacturer, GenBioPro, Inc.).

Additional support for the survey was provided by Fidelity Charitable and an “anonymous foundation.” Grossman ironically serves on the editorial board of Contraception, the journal in which he publishes much of his research, including this survey. Contraception is the official journal of the Society of Family Planning (SFP), founded with a “generous contribution” from the Packard Foundation. It receives millions from the Buffett Foundation (as in billionaire Warren Buffett), another Danco investor.

Unlike more reputable publications, Contraception regularly fails to require that the authors of abortion studies disclose all their funding sources, while permitting them to claim there is no conflict of interest in their research. Yet, in other studies where Grossman cited an “anonymous” funding source and was challenged, it turned out to be the Buffett Foundation. 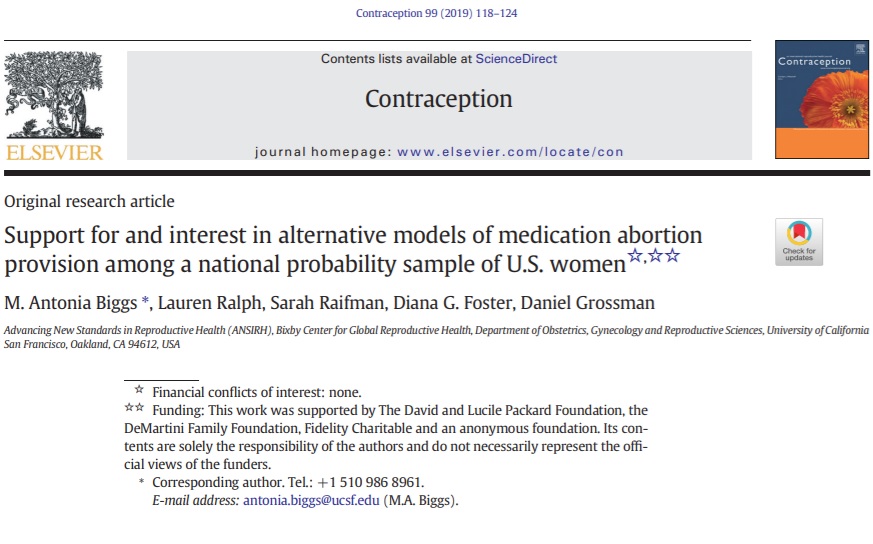 If cost is an obstacle, Grossman suggests insurance foot the bill for the abortion pill

Grossman seemed concerned over “potential obstacles” to providing the pills in advance of a pregnancy, with ethics and the safety of women — and even potential abuse victims — nowhere among the list of concerns. Instead, the major “obstacle,” according to Grossman, was the cost of the abortion pill regimen, which is currently set by the abortion industry determined to make a profit.

“Mifepristone… has a price tag of about $70. (The second drug, misoprostol, costs about $5.) Unless the price of mifepristone is reduced or medical insurance covers the pill, it is unlikely that advance provision of abortion pills would be widely adopted,” Grossman wrote.

To remedy this “obstacle,” Grossman did not extol the “virtue” of reducing abortion facility profits but instead suggested that insurance companies should pick up the tab. Surely taxpayer funding would not be far behind. Grossman then called for “more research,” announcing his plans to “start such a study next year.” I’m sure it goes without saying that such a study is likely to arrive at a predetermined abortion-favorable conclusion.