A letter sent by the U.S. Food and Drug Administration (FDA) to the pro-abortion American College of Obstetrics and Gynecology (ACOG) indicates that the agency plans to “exercise enforcement discretion” in the dispensing of the abortion pill by mail during the COVID-19 pandemic. In other words, the FDA intends to continue to allow the distribution of these dangerous abortion drugs by mail for the duration of the pandemic.

The decision follows ongoing litigation filed by ACOG against the FDA asserting that requiring mifepristone (the abortion pill) to be dispensed to abortion clients in person during the COVID-19 pandemic is an undue burden. Under FDA’s REMS (Risk Evaluation and Mitigation Strategy), the abortion pill mifepristone (used in a regimen with misoprostol) must be dispensed by a certified prescriber at an approved hospital or clinic and is prohibited from being sold online or in a pharmacy.

BREAKING: ACOG win! The @US_FDA Acting Commissioner Janet Woodcock has notified @ACOG and @MySMFM that the agency will "exercise enforcement discretion" regarding #mifepristone through the duration of the #COVID19 public health emergency. 1/ pic.twitter.com/PDpJ7000bc

The ACOG is not an impartial medical organization; it is radically pro-abortion. It has been funded by organizations that directly received funds from U.S. abortion pill manufacturer Danco Laboratories. ACOG is also funded by the David and Lucile Packard Foundation, a Danco investor. In 2018, the ACOG received $1.4 million from the Buffett Foundation — a known abortion philanthropist —and has received hundreds of thousands from the foundation every year for the past several years. Buffett was also one of the first investors in Danco.

The letter was sent by Janet Woodcock, Acting Commissioner of the FDA under the Biden administration who previously served as Director of the FDA’s Center for Drug Evaluation and Research (CDER) when the Agency approved the abortion pill. 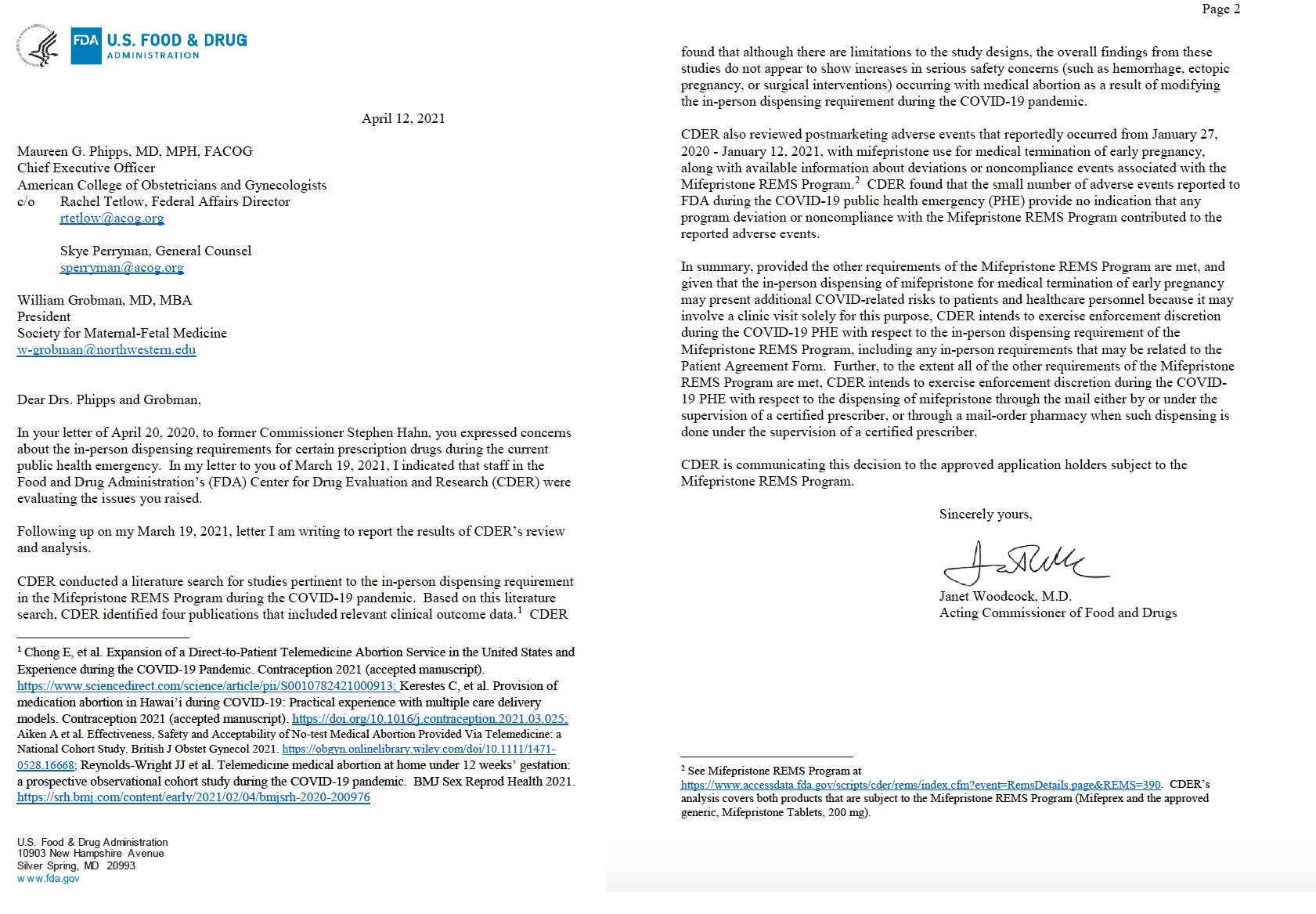 In the letter, Woodcock claims that CDER reviewed “postmarketing adverse events that reportedly occurred from January 27, 2020 – January 12, 2021” and found the “small number of adverse events reported to FDA during the COVID-19 public health emergency (PHE) provided no indication that any program deviation or noncompliance with the Mifepristone REMS contributed to the reported adverse events.”

What Woodcock failed to note is that changes made to the REMS by the FDA in 2016 no longer required the manufacturer of the abortion pill, Danco Laboratories or its generic GenBioPro to report non-fatal adverse effects.

The letter also indicates that CDER reviewed at least four studies published around the dispensing of the abortion pill via telemedicine. One of those “studies” was based on a TelAbortion Project sponsored by Gynuity Health Projects. Live Action News has previously documented the funding streams and conflicts of interest surrounding multiple abortion pill studies like this one.

The letter made clear that the FDA planned to “exercise enforcement discretion” with respect to in-person requirements as well as the dispensing of the abortion pill through the mail.

Provided the other requirements of the Mifepristone REMS are met and given that the in-person dispensing of mifepristone… may present additional COVID-related risks to patients and healthcare personnel… CDER intends to exercise enforcement discretion during the COVID-19 PHE with respect to the in-person dispensing requirement… [and] with respect to the dispensing of mifepristone through the mail either by or under the supervision of a certified prescriber or through a mail order pharmacy when such dispensing is done under the supervision of a certified prescriber.

SBA List president Marjorie Dannenfelser called the FDA’s decision “pure politics,” adding, “The Biden-Harris FDA is acting in the financial interest of the big abortion lobby. This is flagrant and dangerous disregard for the health and safety of American women and girls.”

Because of today’s decision, women will be home alone delivering a dead child, unsure whether the volume of blood loss they see is ‘normal’ for the abortion procedure or them hemorrhaging and bleeding out. Unsure if the pain they feel is the ‘normal’ pain of the abortion procedure or pain from their ectopic pregnancy going undiagnosed and now threatening their life. Now, due to the utter carelessness of the FDA, the door has been opened for sexual predators to have the abortion pill delivered by mail so they can administer it to their victims and destroy the evidence of their sexual crimes.

The FDA is out of line and the American people should respond en masse calling for them to pull the pill. In a move showing blatant disdain for the intellect of the American people, today’s letter from the FDA claims that the ‘small number of adverse events reported to the FDA during the COVID-19 public health emergency’ led to their decision.

In reality, there is no requirement for the manufacturer of the pill, Danco Laboratories, or its generic, GenBioPro, to report any adverse reactions except death under REMS since 2016. In addition, there are no federal laws in place to require or track abortion complications across all states.

In October of 2020, the first U.S. online pharmacy announced plans to ship abortion pills to patients across the country during COVID-19. Shortly thereafter, virtual abortion pill dispensaries began to flood the internet.

While the latest changes to FDA’s REMS are only in effect during the pandemic, the Biden-Harris administration is expected to pressure the FDA to permanently remove the REMS from the abortion pill. If this occurs, it will likely result in a surge of abortion pill sales far beyond the previously estimated $200 million annually.