UPDATE, 12/20/20: Hours after the Judge Chuang denied the Trump Administration’s latest request, the government again filed a request to the Supreme Court to issue a stay in Chuang’s injunction over the in-person requirements of the FDA’s REMS.

In the December 2020 brief, the administration wrote that Chuang’s injunction rested on “multiple legal errors” and accused the District Court of failing to use “actual data” to address their “speculation” that “in-person dispensing requirements would create a substantial burden with respect to abortion access.”

The administration then argued that “in places where in-person dispensing requirements remain in effect, there appeared to be no barrier to abortion of the sort [that was] theorized.”

12/15/20: U.S. District Judge Theodore D. Chuang has denied the Trump administration’s request to reinstate important safety requirements on the abortion pill put in place by the U.S. Food and Drug Administration (FDA) under a system known as REMS (Risk Evaluation and Mitigation System). REMS exists to protect women seeking the abortion pill by requiring proper assessment of gestational age and ruling out life-threatening ectopic pregnancies. The FDA‘s REMS “safety program” affects a limited number of drugs they deem may have “serious safety concerns.” The abortion pill is one of these drugs.

In July, Judge Chuang originally placed the in-person safety requirement under a preliminary injunction during the COVID-19 pandemic as part of a lawsuit filed by the American Civil Liberties Union on behalf of the pro-abortion American College of Obstetricians and Gynecologists. Chuang claimed these requirements during the pandemic constituted an “undue burden” on women seeking abortion. But abortion advocates were pushing to do away with the REMS safety protocol well before the pandemic. Their desire was to flood the market with online DIY abortion pill websites, which is beginning to occur.

In its appeal of Chuang’s initial decision, the FDA argued that REMS was based on “experience and scientific expertise” and was “necessary to ensure safe use” of the abortion pill regimen, consisting of the drugs mifepristone and misoprostol.

In August, Chuang further modified his July decision, enabling abortion clients to obtain the abortion pill online and in pharmacies without in-person visits. That same month, the Trump Administration petitioned the Supreme Court of the United States to stay the motion on the basis that “judges are not to second-guess how officials address public health concerns.” On October 8, the Supreme Court, which did not rule specifically on the merits of Chuang’s preliminary injunction, issued an order for the government to “dissolve, modify, or stay the injunction, including on the ground that relevant circumstances have changed,” and directed the District Court to rule after receiving the government’s renewed motion.

READ: The abortion industry is making a killing from abortion pill sales

The government argued that due to the relaxing of some states’ public health restrictions and progress on medical treatments and vaccines for COVID-19, there should be a a stay or dissolution of the preliminary injunction.

Chuang instead issued a decision on December 9 denying the motion, calling the government’s claims “premature.” He went on to write, “Accordingly, while the progress on vaccines and medical treatments for COVID-19 are cause for optimism and may advance the day that the Preliminary Injunction will no longer be warranted, the impact of these advances to date has not meaningfully altered the current health risks and obstacles to women seeking medication abortions. The Court therefore finds that these factors do not materially alter the likelihood of success on the merits or warrant a stay or dissolution of the injunction at the present time.”

“The Court concludes that Defendants have not identified changed circumstances sufficient to warrant a stay or dissolution of the Preliminary Injunction, in whole or in part,” he added.

Despite Chuang’s ongoing refusal to allow the FDA to enforce safety requirements on the abortion pill during the pandemic, he indicated that his preliminary injunction is not “open-ended.” Writing in his latest ruling on the lawsuit, Chuang noted the preliminary injunction is “slated to end 30 days after the end of the public health emergency declared by the Secretary. With the positive news relating to vaccines, there is reason to hope that day will come soon.” 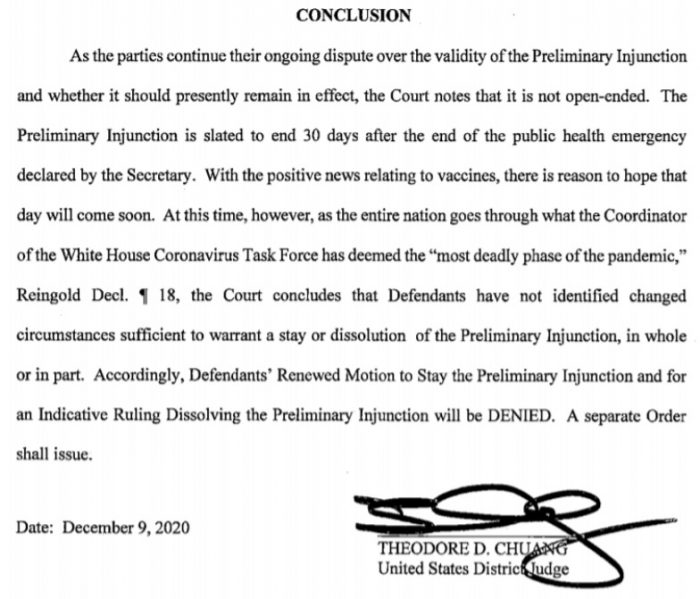 But as Chuang continues to tie the hands of the FDA, virtual abortion pill dispensaries are flooding the online marketplace to take advantage of his order in an attempt to profit from abortion pill sales, estimated to gross nearly $200 million annually. The abortion pill has ended the lives of about four million preborn human beings, and has killed dozens of women and sent thousands to the hospital with serious complications.

Pro-life groups are pushing back. In July 2020, Live Action and a coalition of pro-life groups including the Susan B. Anthony List, Students for Life for America, and the American Association of Pro-Life Obstetricians and Gynecologists, sent a letter to the FDA, calling on the Commissioner to remove Mifeprex (mifepristone) and its approved generics from the U.S. market. Following that call, in September 2020, multiple lawmakers in Congress sent a letter to the FDA asking them to classify the abortion pill as dangerous and remove it from the market. Thus far, no action has been taken by the FDA.