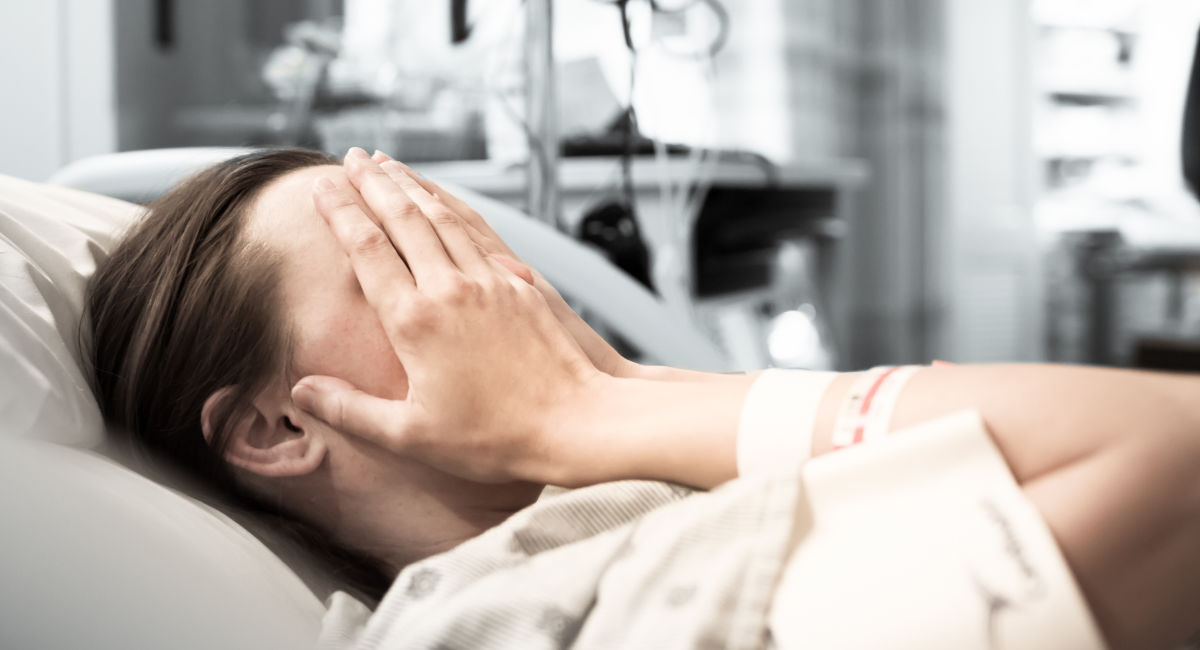 A post-Roe study, funded by the pro-abortion David and Lucile Packard Foundation, an early investor of the abortion pill manufacturer, Danco Laboratories, is being conducted by abortion advocates at the University of California San Francisco (UCSF), which trains abortionists. The study is seeking information about incidents of “poor-quality medical care” following the Supreme Court’s Dobbs v. Jackson Women’s Health Organization decision that overturned Roe v. Wade. 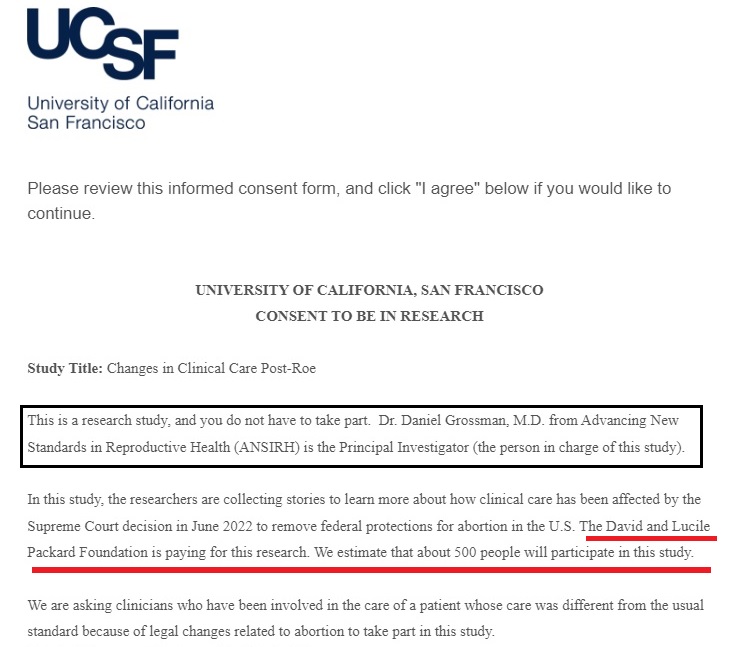 While the study doesn’t define what constitutes ‘poor quality care’, it is clear that abortion advocates sponsoring the survey are planning to draw conclusions between the pro-life protections enacted in specific states and poor medical care suffered by pregnant women. While sponsors hope to blame any poor medical care on the overturning of Roe v. Wade, they failed to suggest there be any meaningful federal mandates to gather data on abortion-related complications.

Instead, sponsors are hoping to gather information about:

Ectopic pregnancy and miscarriage care are not abortions and any delay in treating these conditions is the fault of the health care professional treating the pregnant woman as well as the pro-abortion media intent on confusing the public about pro-life laws.

What does the survey ask for?

The survey asks respondents the following: “Where did the care take place that was different from the usual standard?” It then gives a few options such as “hospital” or “clinic.” It also asks for details about the patient’s race, primary language, and payment method.

In addition, the survey requests the “approximate gestational age” of the preborn baby before asking the respondent to “describe the clinical scenario and how management was different due to recent laws.” It provides either a text box or a link to record a statement.

And, while the study encourages “health care providers to request permission from patients before sharing their stories” it claims that “this is not required.”

Who will review submissions?

The study website CarepostRoe.com, reveals that abortionist Dr. Daniel Grossman, from Advancing New Standards in Reproductive Health (ANSIRH) is the Principal Investigator of the study, to “collect stories of clinical care that was different from the usual standard due to new laws since June 2022.”

Grossman is an abortionist leading the charge to expand access to the abortion pill with potential conflicts of interest regarding his studies. He recently suggested that emergency doctors should avoid documenting abortion pill complications in order to hide information from law enforcement in a potentially post-Roe environment. His abortion resume is long and includes being a recent National Abortion Federation (NAF) board member, a consultant to Planned Parenthood Federation of America and the Center for Reproductive Rights, and a recent board member of NARAL Pro-Choice America. Grossman has also served on the board of the Whole Woman’s Health Alliance abortion chain and he is currently the director of ANSIRH, also funded by Packard.

In addition to Grossman, long-time abortion activist Carole Joffe is also on the study team. Joffe is a professor at ANSIRH and has served two terms on the Board of Directors of the National Abortion Federation (NAF). She recently expressed optimism about unregulated “mobile” abortion vans which are beginning to pop up around the country. She is joined by Katrina Kimport, also on the faculty and staff of ANSIRH and with the Bixby Center for Global Reproductive Health, which is involved with “pioneering new methods of abortion, expanding the ranks of doctors specializing in abortion, and bolstering awareness of the positive impact of abortion on women’s lives.” Kimport was described by UCSF on Twitter as “an abortion access advocate.”

Abortion complications unlikely to be reported

It is unlikely that abortion complications caused by poor quality care by abortionists will be reported by the extremely biased pro-abortion sponsors. And, it is also unlikely that the study will detail past incidents involving abortion clients like Keisha Atkins, Lakisha Wilson, Jennifer Morbelli, Christin Gilbert, Jamie Lee Morales — who all died as a result of legal abortion.

Still, as displayed in the tweet below by Life News, women in states that permit abortion continue to be injured by abortion. In fact, Abortion on Trial recently published photos of an ambulance transporting a patient from the late-term abortion facility Southwestern Women’s Options (SWO) operated by Curtis Boyd. It is doubtful that this incident will make it into the study results.

Great, we have examples:

They’re Sending Women to This Blue State for Abortions, But Clinic There Just Injured Woman in Botched Abortionhttps://t.co/h5en5wHqja

Who can join the study?

Those who decide to take part are asked to answer whether they are “a physician, nurse, nurse practitioner, midwife, physician assistant, social worker, psychologist, pharmacist, or other allied health professional” and also asked, “Were you involved in the care of a patient whose management was affected by recent changes in abortion laws since June 2022?”

Grossman claimed on Twitter, “Folks involved in care coordination and logistical support who are familiar with the case may also submit narratives. We launched the project last month and have received about 20 submissions about cases that occurred in 11 states,” he wrote.

“If you agree to be in this study, you will complete an online survey,” the study’s consent form stated. The main question asks you to describe a clinical scenario in which the management of the patient’s care was different due to recent laws. You can choose to type in your response or leave a voice memo through the survey platform. The survey also asks around 10 optional general questions about the location of the case and patient information, limiting details to avoid identifying the patient or facility(ies) where care took place.

In a tweet, Grossman implied that the information they are requesting will not impact the privacy of the facility, doctor, or patient, writing, “Our project is being done as a study approved by the UCSF IRB, and we have a Certificate of Confidentiality from @NIH. We are not collecting any identifying information from folks who submit stories—not even IP addresses.” Grossman also stated on Twitter, “We’re working on creating an interactive map showing where cases have been reported, as well as the type of case and quotes from the narrative.”

Yet the consent form for the survey clearly suggests privacy may be at risk.

“Some of the survey questions may make you feel uncomfortable if you are concerned about your identity, your facility’s identity, or the patient’s identity being disclosed. You are free to skip any question,” the consent form states.

“Once the study is done using your information, we may use the information for future research studies or share it with other researchers so they can use it for other studies in the future. We will not share your name or any other personal information. While unlikely, we cannot guarantee that this will prevent researchers from determining who you are. We will not ask you for additional permission to share this de-identified information,” it states (emphasis added).

Despite the attempt to blame poor medical care on the overturning of Roe, even Grossman recently admitted in a webinar, “A lot of the stories stem from confusion about what can be done and trying to react in the moment because there hadn’t been much planning done.”

He went on to suggest that there should be clear guidance saying, “There should never be any delay in treating a tubal ectopic pregnancy. But yet we’re seeing these stories where there’s confusion about whether that’s allowed. And multiple people need to weigh in to give an opinion before treatment can be provided and that’s just shocking.”

Pro-abortion doctors and media outlets have been using tragic cases of medical negligence in order to promote abortion. In these cases, it isn’t post-Roe pro-life laws that are putting pregnant women at risk, but doctors who are failing to carry out standard medical practices.