A recent press release noted that the DEA and FDA “seized 44 websites advertising the sale of illicit vaping cartridges containing tetrahydrocannabinol (THC)…. The action, which is part of Operation Vapor Lock, reflects ongoing work by federal, state and local authorities to investigate the supply chain of vaping products associated with recent lung injuries.” The FDA action took place despite the agency admitting, “To date, none of the products advertised on the 44 websites have been confirmed to be linked to any cases of lung injury….”

Under an FDA safety protocol called REMS, the abortion pill (which consist of mifepristone – or Mifeprex – and Misoprostol) can only be ordered, prescribed, and dispensed by and under the supervision of a hospital or clinic. In addition, there are requirements in place to confirm important details like gestational age and any possible ectopic pregnancies. Yet, today, websites clearly identified by the FDA as illegally dispensing the abortion pill online against the REMS requirements continue to operate with impunity.

Recently, illegal online abortion pill domains have popped up en masse, often defended by abortion advocates pushing for “self-managed” DIY abortion. Abortion advocates then advise women who experience complications after using illegally obtained abortion pills to present to the ER and claim they are suffering natural miscarriages. This, of course, means that any deaths or injuries are labeled as pregnancy/miscarriage complications instead of abortion pill complications. In 2018, the Charlotte Lozier Institute published a fact sheet exposing the reality that “72 unique websites” were selling the pills online. In April 2018, the pro-abortion Journal Contraception was able to “identif[y] 18 websites and order[] 22 [abortion pill products]… from online vendors.”

The FDA told Live Action News in an e-mail that “failure to correct the violations of the law may result in FDA regulatory action, including seizure or injunction, without further notice.”

What happened after FDA warnings were sent? 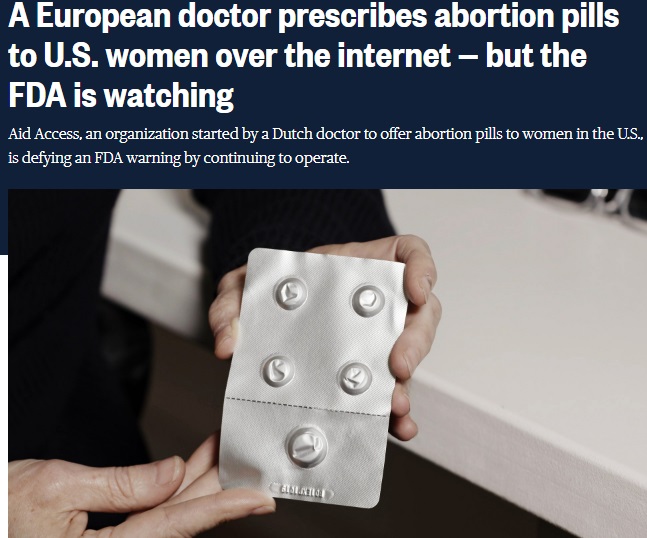 In May 2019, the FDA told Live Action News, “We cannot comment on a potential future action at this time, but we remain very concerned about the sale of unapproved mifepristone for medical termination of early pregnancy on the Internet, because this bypasses important safeguards designed to protect women’s health. Unapproved drugs purchased from foreign internet sources are not the FDA-approved versions of the drugs, and therefore, they are not subject to FDA-regulated manufacturing controls or FDA inspection of manufacturing facilities. Drugs that have circumvented regulatory safeguards may be contaminated, counterfeit, contain varying amounts of active ingredients, or contain different ingredients altogether.”

The FDA encourages consumers to “[r]eport a website that you think is illegally selling human drugs, animal drugs, medical devices, biological products, foods, dietary supplements or cosmetics.” And the FDA has a history of seizing drugs and suspending or shutting down websites that violate their regulations… except, it seems, when the illegal pills are abortion drugs.

While we wait for the FDA to seize illegally dispensed abortion drugs or suspend their websites, Aid Access admitted that in 2018, the group reportedly filled 2,500 prescriptions of the illegal abortion pills, filled by a “pharmacy in India.” A lawsuit later filed by the group noted it had actually shipped 7,131 abortion pills to women in the U.S. between March 30, 2018, and August 27, 2019, well after the FDA’s warning letter was sent — a deliberate violation of the FDA demand.

According to an October 2019 article published by the New York Times, “Nearly 1,300 people, disproportionately young, have been sickened from vaping THC, nicotine or both. At least 29 have died.” Yet, in 2018, the FDA updated its adverse effects reports on just legally dispensed abortion pills, revealing 24 deaths of women associated with the abortion pill since its approval. The report documents that legally dispensed abortion pills have caused nearly 4,200 reported adverse effects, including 1,042 hospitalizations, nearly 600 instances of blood loss requiring transfusions and other serious complications. But, as Live Action News previously noted, under 2016 changes, abortion pill manufacturer DANCO no longer has to report non-fatal adverse effects, so we can only imagine what the number really is.