Recently, pro-abortion Senator Elizabeth Warren noted in a Congressional hearing on the COVID-19 vaccine that financial conflicts of interest in the pharmaceutical industry are “a real problem,” stating, “If federal officials stand to gain financially from certain COVID vaccines, and not from others, then Americans might reasonably worry that the vaccine was pushed for personal profit and not because it was best for our health.” She went on to state that “… [f]inancial conflicts are a real problem in the drug and vaccine development process.”

Financial conflicts of interest should always be pointed out, but when it comes to abortion, this rarely happens. The abortion industry is constantly claiming that the abortion pill is safe — so safe that it doesn’t need any FDA safeguards, and should even be sold over-the-counter. But these claims are often made by people with potential financial conflicts of interest who could be motivated by profit rather than actual safety, and pro-abortion politicians and the media fail to investigate.

In the early 1990’s, Congress summoned tobacco industry executives to answer claims surrounding the safety of nicotine after RJ Reynolds and others commissioned and financed studies to convince the public that smoking was not dangerous. An expert in a video from Stanford Medicine states, “They used pseudoscience… and very often they quoted scientific studies that were completely invalid. Often, they were paid for by the industry to make a specific point rather than to ask a question. These were very simplistically put out as scientific findings about the safety of their tobacco product.”

If it is possible for conflicts of interest to exist within the tobacco and vaccine industries as has been claimed, surely the same is possible with the abortion industry.

The abortion pill has long been shrouded in secrecy, yet what we do know is that there is a great deal of money to be made from the drug, with the industry estimated to gross nearly $200 million annually in abortion pill sales — twice as much money as initially projected. Planned Parenthood alone has taken in approximately half of those sales. Live Action News previously exposed the ties between study funders/researchers to organizations funded by abortion pill manufacturer Danco Laboratories or its investors. (The Buffett and Packard Foundations along with billionaire George Soros‘ Open Society Foundations were original investors in Danco.)

It was the eugenics-founded Population Council that brought the abortion pill into the U.S. and set up Danco, and the Council oversaw clinical trials of the abortion pill as well, setting up a system through which it would receive royalties from its sales. The Population Council is funded by the same billionaire pro-abortion philanthropists who seeded Danco (Buffett, Packard, and others listed below):

To conduct clinical trials in the 1990s for the abortion pill’s FDA approval, the Buffett Foundation gave at least $2 million in interest-free loans to the Population Council. The Packard Foundation also gave Danco a $14.2 million investment in 1996 and is now investing millions in GenBioPro, Inc., a company the FDA approved in 2019 to manufacture a generic version of the abortion pill. Packard would go on to fund Gynuity Health Projects, which is currently conducting abortion pill clinical trials and a number of studies with the goal of pill expansion.

In addition to Gynuity, Dr. Daniel Grossman is behind several abortion pill clinical trials sponsored by the University of California San Francisco (UCSF) and is regularly cited by the media which fails to note any conflicts.

Gynuity is conducting an expanding TelAbortion clinical trial in the U.S. while receiving funding from National Abortion Federation (NAF), the nation’s largest abortion membership organization. Gynuity’s founder and President, Beverly Winikoff, serves on NAF’s board. NAF is funded by the Buffett and Packard Foundations and was at one time directly funded by Danco. The Buffett and Packard Foundations also fund Gynuity, financing studies which are used to convince the public that abortion is safe.

Winikoff served on the board of the Society of Family Planning (SFP) whose official journal, Contraception, publishes studies on alleged safety of the abortion pill. SFP was founded with a “generous contribution” from Packard and receives millions from the Buffett Foundation.

During the time Gynuity abortion pill trials were conducted, the company received financial support from Ibis Reproductive Health. Ibis was for years also funded directly by Danco. After Live Action News exposed this financial conflict of interest, the funding connections were suddenly scrubbed from Ibis’s website. Ibis is also currently funded by the Packard Foundation and was previously funded by the Population Council and Gynuity. 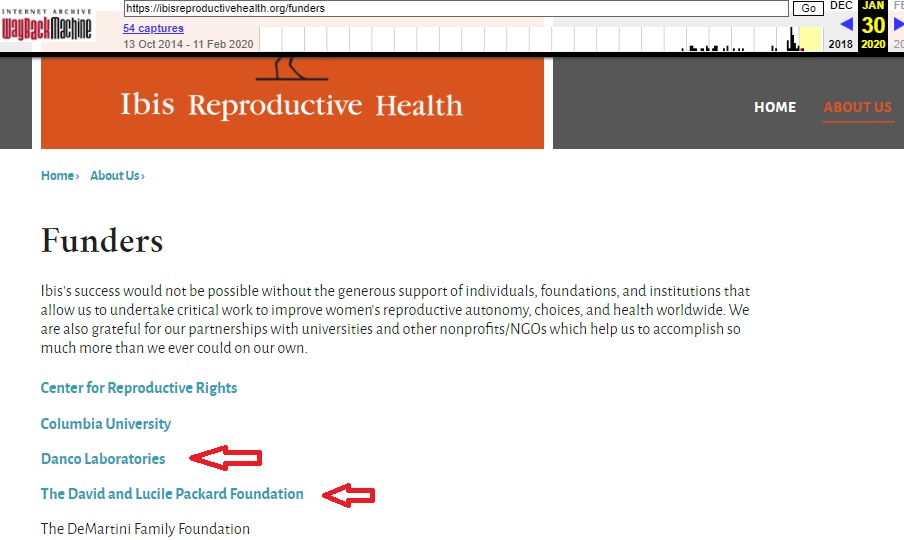 Dr. Daniel Grossman is behind clinical trials to expand abortion via pharmacy dispensing and mail order dispensing of the abortion pill, outside the FDA’s safeguards (REMS). He is a member of the Editorial Board of the Journal Contraception (mentioned above in connection with Winikoff) where he publishes his abortion studies.

Grossman’s trials are sponsored by the University of California San Francisco (UCSF). Both the Packard and Buffett Foundations have invested in the University of California (UC) system. In past years, Buffett gave $78 million to UC — and according to the New York Times, is the primary financier of the Bixby Center’s Ryan Residency Program at UCSF, which trains abortionists, and where Grossman works.

Grossman is currently Senior Director at Ibis Reproductive Health. Since 2014, while Grossman was listed as VP of Research, Ibis was directly funded by abortion pill manufacturer Danco. Danco supported Ibis in the years that followed as well, when Grossman became director and began to publish his abortion pill trials. Again, when Live Action News uncovered this conflict of interest, the connection to Danco was scrubbed from Ibis’s website.

While conducting trials on the abortion pill, Grossman served on organizations that lobby for abortion (NAF and NARAL Pro-Choice America). In 2019, after Live Action News exposed Grossman’s ties to NARAL, he suddenly announced his retirement from the group’s board. Grossman still serves on NAF’s board and has served on the board of the Whole Woman’s Health Alliance abortion chain.

Grossman is also the director of UCSF’s Advancing New Standards in Reproductive Health (ANSIRH), also funded by Packard. ANSIRH publishes workbooks on abortion training. This curriculum was established with financial help from Packard and openly promotes self-managed (DIY) abortion, illegal abortion pill websites, and later gestational limits, all in direct violation of the FDA’s safety protocols. The curriculum is supported by NAF, Gynuity, ANSIRH, Planned Parenthood, the Society of Family Planning, Danco, and others. The curriculum’s website also admits that it “receives unrestricted educational grant funding from Danco, LLC,” and has for years.

Since the abortion pill’s U.S. approval in 2000, millions of preborn children and at least 24 women have tragically died. Despite the secrecy surrounding the drug originally known as RU-486 (mifepristone), neither the media nor any politician has fully investigated these glaring financial conflicts of interest. These conflicts lend support to the call to remove mifepristone and its approved generics used to end early pregnancy from the U.S. market.