Abortion advocates are pushing “self-managed” abortion as safe and simple, yet their own statistics reveal that the abortion pill regimen fails between 7,000 to 24,000 times annually — or even as high as 31,000 times a year. This means women could potentially need a second (surgical) abortion. Currently, an FDA safety system known as REMS requires prescribers of the abortion pill to accurately determine the correct gestational age of the preborn baby, detect an ectopic pregnancy if one exists, and have a means to provide emergency care to patients. In many cases, the abortion facility will require the woman to return to verify that the abortion was complete. If abortion advocates succeed in getting the FDA to do away with REMS, abortion advocates will shift that responsibility to the woman or teen girl, many of whom may be unaware that their abortions were incomplete. This is potentially life threatening.

The abortion pill regimen consists of two pills: Mifeprex (regulated under the REMS system) and Misoprostol. The regimen is approved for use through 70 days (10 weeks) of pregnancy. The FDA’s 2019 label for Mifeprex makes it clear that the failure rate increases as the gestational age advances. 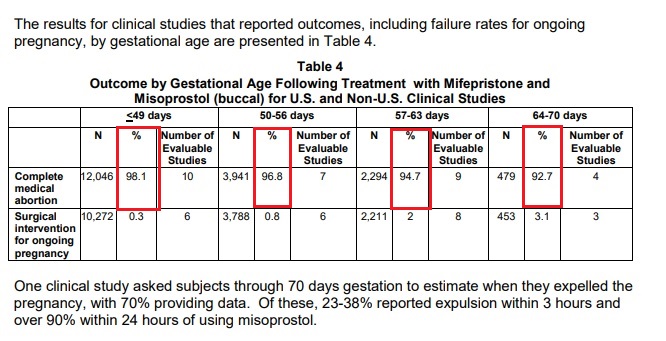 How many abortions are done via the abortion pill annually?

Planned Parenthood’s former research arm and “special affiliate,” the Guttmacher Institute, reports that the abortion pill currently accounts for nearly 40 percent (39%) of reported abortions in the United states. According to their data, in 2017 there were 339,640 medication abortions committed nationally out of 862,320 total reported.

What is the failure rate of the abortion pill? 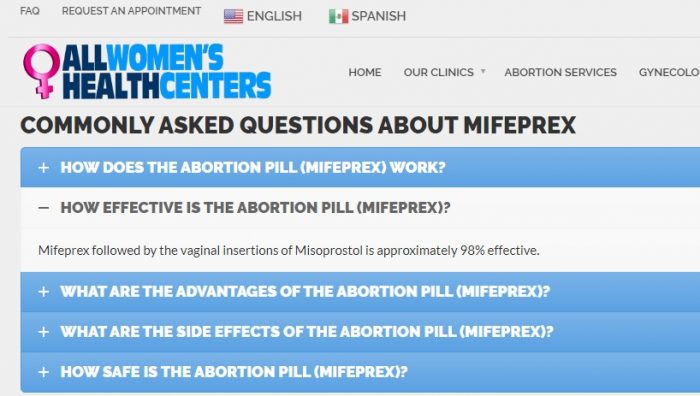 All Womens Health Centers on abortion pill and failure rate

Camelback Family Planning: “Mifeprex… is 95-98% effective…. If the pregnancy tissue has not passed, you might need a D&C or to repeat the Misoprostol.”

West Alabama Women’s Center: “There is a 96-98% chance the medications will be successful in bringing on an abortion.”Asked how the patient will know the abortion is complete, the clinic advises, “The only way to be certain that the abortion is over is to come back to the clinic for your follow-up visit.” They add, “The embryo is usually a small amount of white tissue, and sometimes it is inside a blood clot. Even if you see it close up, it doesn’t look like a baby…. However, the further along in the pregnancy the greater the chances are of seeing fetal parts.”

What about gestational age?

According to a Planned Parenthood document as well as current online information for patients, failure rates for the abortion pill vary by gestational age: 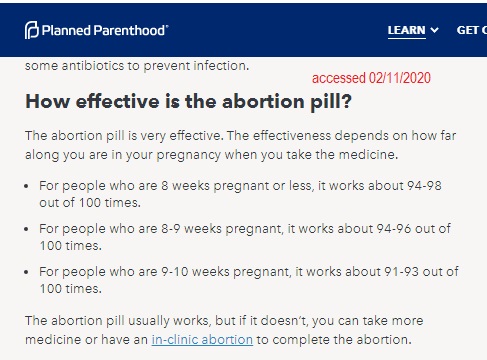 What does the manufacturer claim?

DANCO Laboratories’ website reads, “Mifeprex*(mifepristone) is 93-98% effective for safely ending pregnancy (2-7% of women will need a surgical procedure to end the pregnancy or stop heavy bleeding).” DANCO cites this same statistic in an online pamphlet. 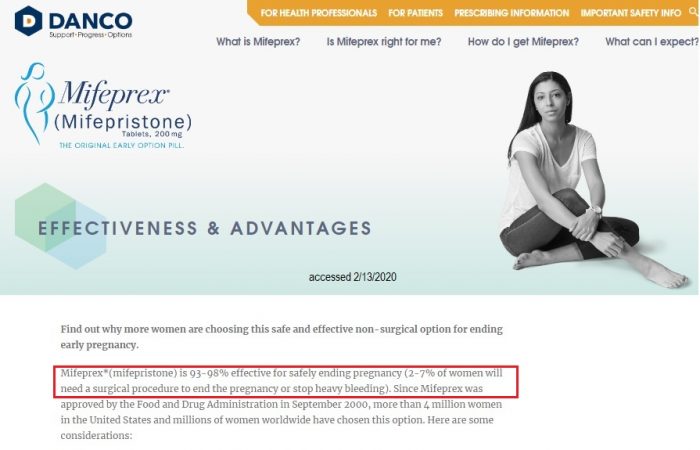 GenBioPro is the company that makes the generic version of Mifeprex, (approved in 2019). Their online pamphlet states, “Every year in the United States, more than 200,000 women manage their unwanted pregnancy through medical abortion…. 2-7%—will need a follow-up surgical procedure to end their pregnancy or to stop too much bleeding.”

Based on this, how many chemical abortions fail annually?

Little Rock Family Planning abortion facility warns patients that they should not obtain a medication abortion if, “You cannot easily get emergency medical help should a problem occur.”

We know that more women are attempting to buy pills online to end their pregnancies; however, when you buy pills from the Internet you do not know what you are really getting. While rare, if you experience an ectopic pregnancy (a pregnancy in which the fertilized egg implants outside the uterus) and it is not properly diagnosed and treated by a physician, it could be life threatening….The abortion pill, prescribed by a physician, is a safe way to have a self-managed abortion at home. It is in your best interest to be seen by a physician who is an expert in abortion care.

Shockingly, this late-term abortion facility in Florida advises women, “It is possible up to 4, 5, 6 or 7 months or further to undergo a medical chemical abortion procedure.”

Pro-abortion ER Doctor Dara Kass pointed out, “Recently published results of the Gynuity pilot project showed that 8 percent of their patients who received abortion medication sought follow-up care at a local urgent care clinic or emergency department.” Using the 339,640 (and growing) annual number and we estimate that 27,000 women could report to an emergency department after a “self-managed” abortion every single year.

In 2018, the FDA updated its adverse effects reports on legally dispensed abortion pills, revealing 24 deaths of women associated with the abortion pill since its approval. The report documents that abortion pills have caused nearly 4,200 reported adverse effects, including 1,042 hospitalizations, nearly 600 instances of blood loss requiring transfusions, and other serious complications. But under 2016 changes, abortion pill manufacturer DANCO no longer has to report non-fatal adverse effects, so we have no way of knowing what the number really is.