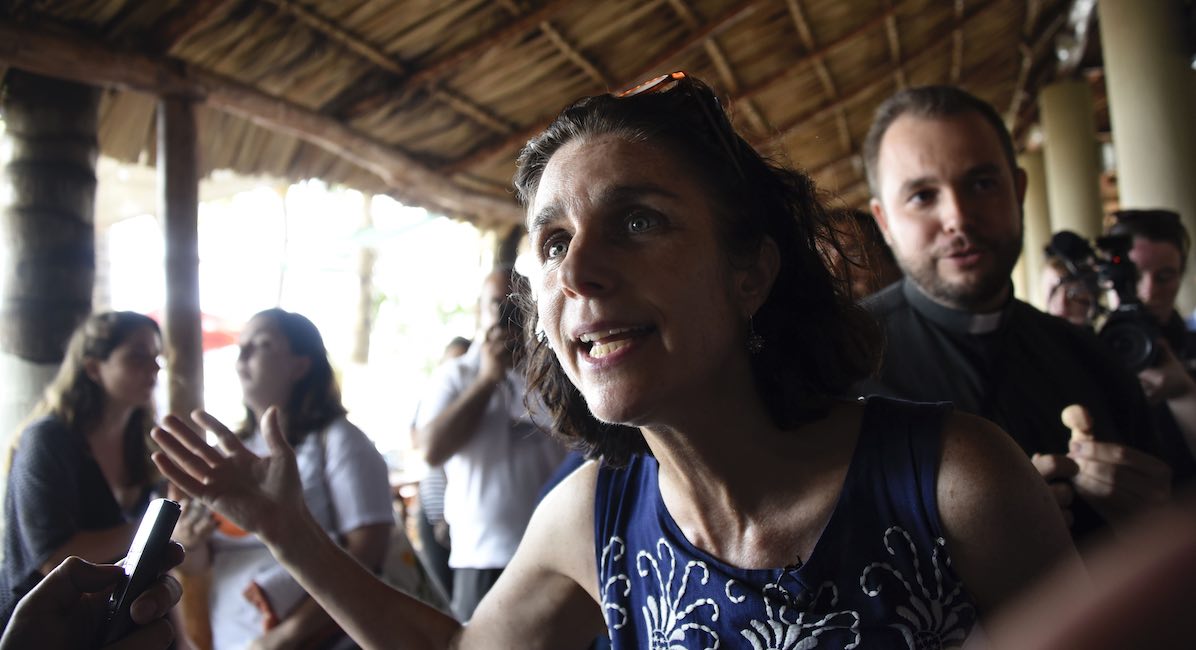 A European abortionist has vowed to continue sending abortion pills to the United States, routing them through India, in an effort to get around pro-life laws like the Texas Heartbeat Act.

Rebecca Gomperts is an abortionist based in Amsterdam and founded both Women on Waves and Aid Access, organizations that endeavor to dispense abortion pills to women in countries where abortion is heavily restricted. Gomperts has used drones to drop abortion pills as a means to skirt the law in Poland, and she attempted to use a Dutch ship to bring abortion to Guatemala, only to be turned away by the Guatemalan Army — which rightfully pointed out that abortion group’s sole purpose there was to violate the country’s constitution. Now, Gomperts and Aid Access are directing their illegal operation towards Texas.

“We have nine U.S. providers who are licensed and serving 18 states, and then, if you’re in any of the other states, then Dr. Gomperts is the provider for the other states,” Christie Pitney of Aid Access told KHOU, a Houston-based television station. “We have a unique opportunity with Dr. Gomperts being in Europe that we’re able to provide telehealth abortion to all 50 states.”

Pitney continued by explaining that it doesn’t matter what laws a particular state may pass; Aid Access believes the law does not apply to Gomperts. “Being outside in Europe, kind of puts her in this nice gray area where she’s still able to provide that care,” she said. “It’s essential healthcare that everyone should have access to and so we’re going to continue to provide that care.”

But are they actually providing health care?

Abortion advocates shrug off the notion that the abortion pill regimen could possibly be dangerous. Yet a study found that the abortion pill is four times more dangerous than surgical abortions. Mild side effects include cramping, nausea, diarrhea, and abdominal pain, while more serious complications include uterine hemorrhaging, viral infections, sepsis, vaginitis, and even death.*

On top of that, unsupervised abortions are not the gentle and safe event that women are told they will be; instead, with Aid Access, women will be experiencing pain and trauma from the abortion pill alone. Rather than being easy, women have described their experiences taking the abortion pill as “horrific,” “terrifying,” “humiliating,” and like “the scene of a murder.”

On top of all of this, women are instructed to lie if anything goes wrong, and tell emergency room personnel that they are having a miscarriage. This advice is dangerous; if doctors don’t know what a woman has done to necessitate emergency care, how can they adequately treat her?

Mailing abortion pills also raises another risk: coercion. The process of international pill smuggling can in no way ensure that it’s actually a woman seeking an abortion who obtains the pills and not a man trying to force the abortion on an unsuspecting partner. One woman, Ursula Wing, used her jewelry business as a front for selling abortion pills. She, like Gomperts, imported the pills from India and sold them to at least 2,000 people before getting caught.

What brought Wing down was a man named Jeffrey Smith, who ordered the pills from her and put them in his girlfriend’s water bottle. After noticing a residue in the water, she took the bottle to the police, who tested positive for mifepristone. Another man, Manishkumar Patel, put abortion pills into his girlfriend’s drink to force an abortion, though he refused to say where or how he got them. Yet another man, Jin Mimae, tricked his girlfriend into taking abortion pills.

“Neither company required proof of a doctor’s visit or even an ultrasound proving I was pregnant,” Baca told Live Action News. “They did nothing to make sure I was not being abused, raped or trafficked. They did absolutely nothing to verify I was an adult beyond asking me how old I was. I simply told them I was born in 1995, but they never asked for an ID.”

As Liz Martin, Baca was told by Aid Access to lie if complications were experienced. “If you go to the hospital, you can tell the doctors you think you had a miscarriage,” the transcript read. “The symptoms and treatment are the same for miscarriage or abortion, and doctors know how to handle a miscarriage.”

Another important issue is the safety of what women will be receiving when Gomperts sends them pills from India. Massoud Motamed, a former inspector with the U.S. Food and Drug Administration (FDA), has repeatedly tried to warn officials of systemic problems with pharmaceutical companies in China and India. These countries are favored because of low costs and minimal government oversight, but this also leads to quality control problems — and when the product is medication, that can be extremely dangerous.

According to Motamed, FDA inspectors cannot adequately keep up with foreign drug manufacturers that, he believes, are hiding problems with their production. “Say I’m at a domestic facility and I tell my supervisors that I’m finding all these problems and I need more time to inspect. That happens — no issue,” Motamed told NBC News. “The same is not true of a foreign facility. I’ve had inspections where I really could have benefited from the extra time and I knew there were problems to be uncovered, but I had to leave the country.”

“I was going to the bathroom and I kept seeing that people were going into an archival room. And that’s not generally typical,” he said, adding that he decided to review the CCTV footage. “They were staying up all night shredding extensive amounts of documents right before our audit… It means there are systemic issues. It’s one of the more concerning findings I’ve had over the years.”

Others beyond Motamed have raised alarms about the Indian pharmaceutical industry and have likewise accused companies of shredding information to keep it hidden, while others had violations for cleanliness and sanitation. Rather than fix these issues, the Indian companies did all they could to hide them and keep them secret from the FDA.

Yet Gomperts wants American women to believe that they should feel safe taking pills, prescribed by a European doctor and manufactured in India, without having any way to know for sure what they’re actually ingesting or if they were manufactured under safe conditions.

These actions are indicative of a pro-abortion agenda being held up above all else, despite a country’s laws or culture, and despite risks to women’s safety. The FDA has stepped in to stop Gomperts before. Time will tell whether they will step in again.

*Editor’s Note: The FDA has received reports of serious adverse events in women who took Mifeprex. As of December 31, 2018, there were reports of 24 deaths of women associated with Mifeprex since the product was approved in September 2000, including two cases of ectopic pregnancy resulting in death; and several cases of severe systemic infection (also called sepsis), including some that were fatal. The adverse events cannot with certainty be causally attributed to mifepristone because of concurrent use of other drugs, other medical or surgical treatments, co-existing medical conditions, and information gaps about patient health status and clinical management of the patient. A summary report of adverse events that reflects data through December 31, 2018, is here.