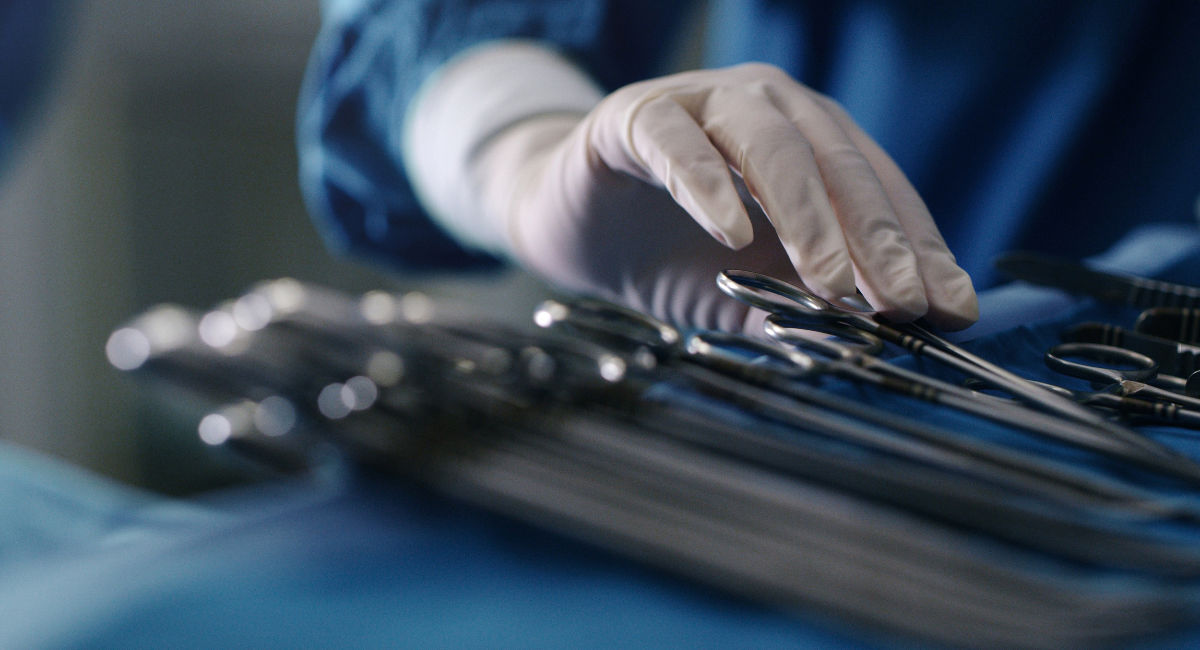 Carole Joffe, a former abortionist recently cited by PolitiFact, has claimed that illegal abortion deaths prior to Roe v. Wade were caused by “inept” abortion providers as well as women self-managing their own abortions — an interesting claim, given the fact that the industry is pushing dangerous DIY abortions by pill today. Joffe made the claims in a training module produced by the University of California San Francisco’s (UCSF) Innovating Education training series entitled, “The History of Abortion in the US prior to Legalization.”

Joffe serves as a professor at Advancing New Standards in Reproductive Health (ANSIRH), a program within UCSF’s Bixby Center for Global Reproductive Health, which trains abortionists. She previously served on the board of the National Abortion Federation and on a program for the Abortion Care Network, a membership organization of independent abortion providers. According to her CV, Joffe also sat on the Advisory Board of the California NOW Foundation, was on the Advisory Board for Planned Parenthood of New York’s Clinician Training Initiatives, and was a long standing member of the Association of Reproductive Health Professionals (ARHP). ARHP was formerly called the Association of Planned Parenthood Physicians, was originally based out of Planned Parenthood offices, and was funded by the organization.

In the UCSF Innovating Education training module, Joffe attempted to describe “who provided abortions” during what she referred to as a “huge huge market of illegal abortion.” 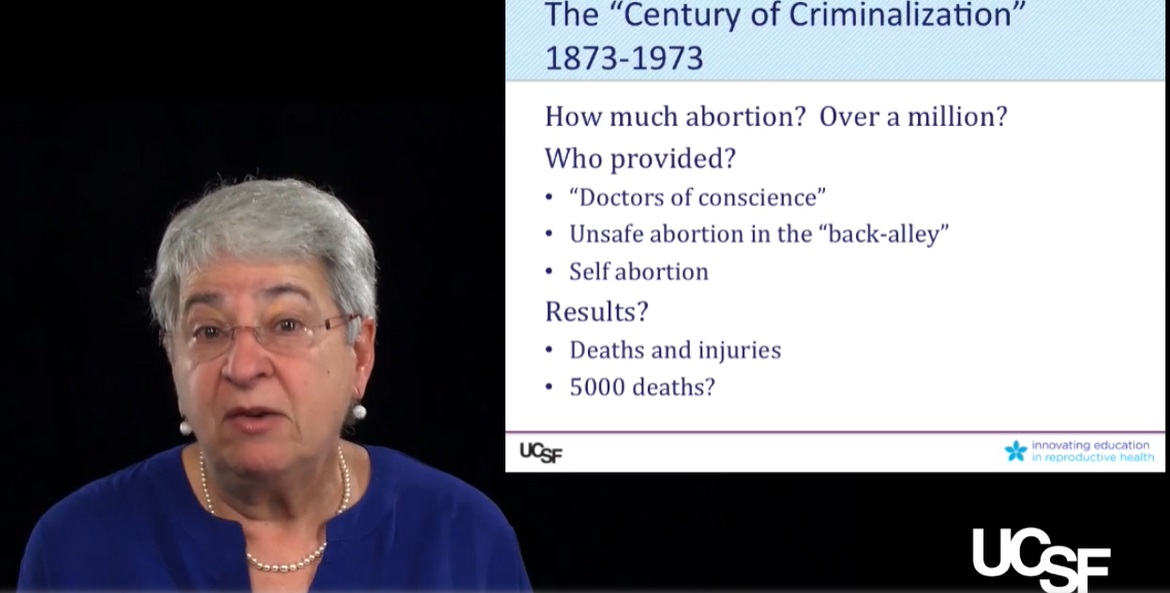 “The categories of providers were actually several,” she claimed.

“There were those who I have referred to in my own scholarship as ‘doctors of conscience’,” Joffe said.

Joffe acknowledged that many illegal abortions were committed by medical doctors, whom she described as “well trained people who were established in the medical practice” and who were “physicians – mainly male.” She claimed this category did not “have to do abortions for financial reasons,” as if to suggest that many illegal abortionists did commit them for financial reasons.

Joffe claimed this category of abortionists committed abortions “often at enormous risks to themselves.”

Joffe then discussed the “legacy of the era” in which women were killed or maimed from abortion by “inept” doctors, claiming that they were “unethical in many cases.”

“There’s another category of provider and it’s this category that has captured the popular imagination of those days. These were the unsafe abortions done in the ‘back alley’. Sometimes these providers have been referred to as ‘butchers’,” Joffe stated, and admitted that “sometimes these people had medical training” or had “M.D.’s,” while others did not.

“The bottom line is these providers were both unethical — in many cases, extorted women for a lot of money, sometimes demanded sexual favors,” she claimed.

Of these so-called “butcher” doctors, Joffe claimed they sometimes “meant well” and “didn’t mean to be inept but were.” She added, “So, the common denominator of these back-alley providers were that they were inept and they maimed and sometimes killed many women.”

What Joffe and others fail to admit is that little changed after abortion was legalized.

Today, the modern abortion industry continues to injure and kill women, to aid child sexual abusers, and to even sexually exploit or assault abortion clients.

“And, finally of course, perhaps the largest category of illegal abortions were women desperately trying to do abortions themselves,” Joffe claimed. She acknowledged that some women did self-abort with “coat hangers” prior to Roe, but she also claimed that “we’ll never have an accurate count of how many women died of illegal abortions.”

That is a particularly interesting claim, because it was largely the abortion industry in partnership with the media which initially lied about the numbers of illegal abortion deaths to manipulate the American public to decriminalize abortion.

Again, according to Joffe, “We will never know by definition exactly how many [illegal] abortions took place.” She explains, “Those scholars of that period who attempted to make estimates typically estimated slightly over a million abortions,” she claimed. Live Action News has previously noted that this number was overestimated.

Joffe failed to cite who these alleged “scholars” were and how their numbers were obtained, since there was no official reporting at that time.

“And… just like the number of abortions that took place, we’ll never have an accurate count of how many women died from illegal abortions,” Joffe claimed. She then went on to cite the debunked statistic that thousands of women died every year.

“Some people put the number at ten thousand, some at one thousand. I’m talking on a yearly basis here,” she said. “The figure I use in my own scholarship is five thousand.” She then called the number of illegal abortion deaths “an estimate” once again, and reiterated that “we really don’t know.”

Live Action News has previously documented (here, here and later here) that the statistics Joffe used have been thoroughly debunked. In 2019, the Washington Post called the previously claimed 1.2 million illegal abortions statistic a “fuzzy” number, even going so far as to criticize the American College of Obstetrics and Gynecology (ACOG) for citing it. In the same fact check, the Post gave former Planned Parenthood president Leana Wen four Pinocchios for her claim alleging tens of thousands of abortion deaths prior to Roe.

“Wen is a doctor, and the ACOG is made up of doctors. They should know better than to peddle statistics based on data that predates the advent of antibiotics. Even given the fuzzy nature of the data and estimates, there is no evidence that in the years immediately preceding the Supreme Court’s decision, thousands of women died every year in the United States from illegal abortions,” the Washington Post fact checker noted. 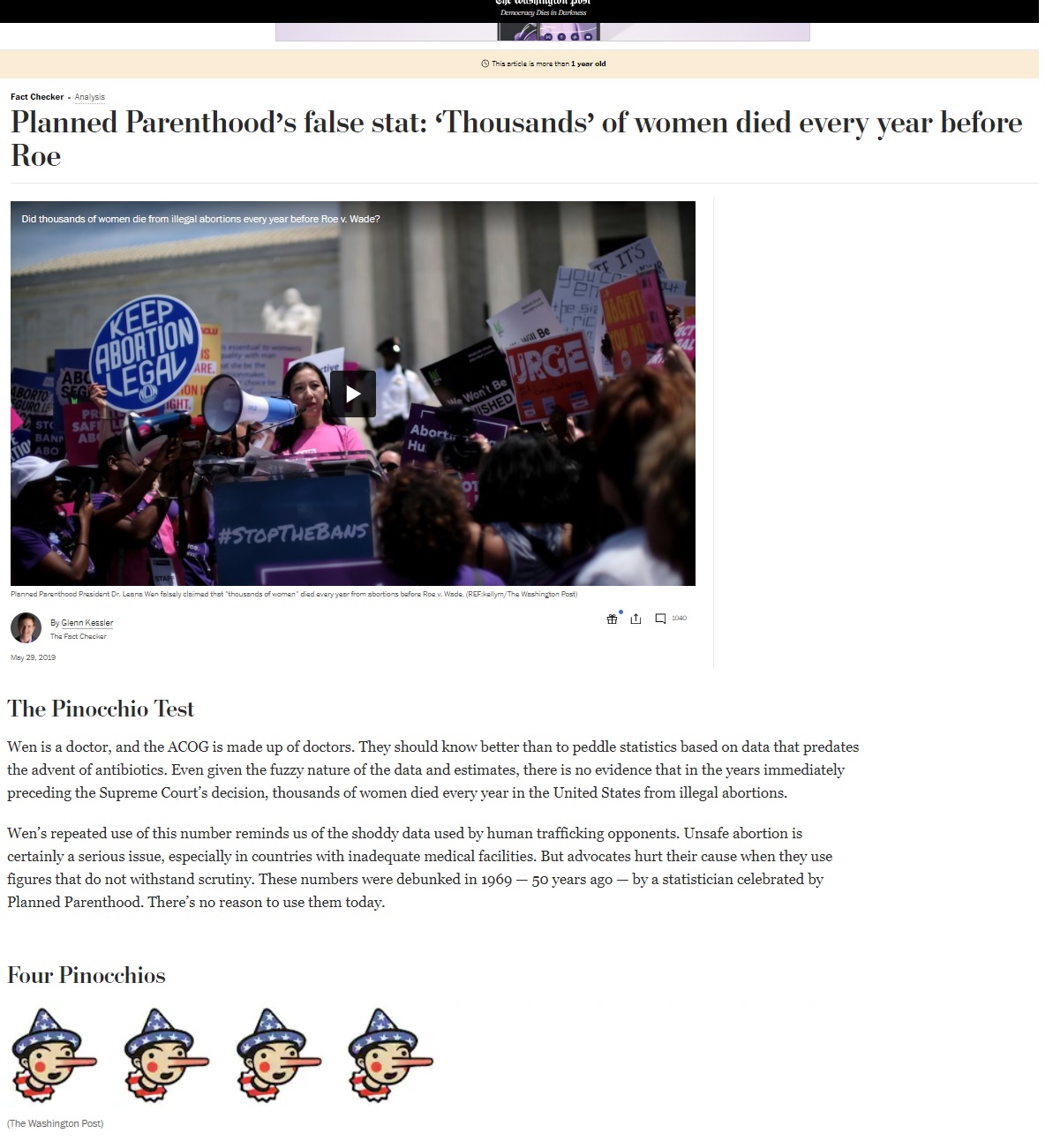 The reality is that the legalization of abortion was never about safety for women.

Today, proponents of abortion are promoting it in all forms, including illegal abortion. And in an about face from years leading up to Roe, abortion advocates now try to avoid scaring women who might believe that “illegal abortion” is “unsafe” — to the extent that they now advise abortion proponents to stop carrying “coat hanger imagery” meant to harken back to pre-Roe illegal self-induced abortions.

When a woman is maimed or killed by abortion — legal or illegal — the fault lies clearly on the backs of the abortion industry or its supporters, which either committed the deadly procedure, blocked safety regulations, or encouraged women to seek illegal abortions.