A new “no-test” abortion pill protocol has been launched by the abortion industry, planned and put in place well before the world was struck with the coronavirus pandemic. Despite the need to accurately diagnose a pregnancy and rule out ectopic pregnancies for women’s safety, abortion businesses now have the option to forego testing — including all lab work and ultrasounds — before dispensing the abortion pill. The stated reason for this is because they view such testing as “barriers to abortion access,” disregarding the fact that this makes the abortion pill regimen even more dangerous for women — and more likely to fail.

Under this new protocol, abortion businesses can choose whether to conduct an ultrasound to determine gestational age and rule out ectopic pregnancy. They can also simply choose to believe the client’s best guess at her last menstrual period to determine gestational age, and can choose to rely on her assumed knowledge of her own blood type and Rh factor — which could impact future pregnancies.

Those promoting “no test” abortion stand to benefit financially

On April 15th, Gynuity Health Projects announced its upcoming webinar on the “no-test” abortion pill protocol. Gynuity is heavily funded by Planned Parenthood and by investors to DANCO Laboratories, which manufactures the abortion pill. Gynuity is currently conducting a clinical trial to expand the abortion pill via mail order (TelAbortion), as well as a clinical trial for use in late-term abortion. The company claims the “no-test” protocol will “enable safe and effective provision of medication abortion without a mandatory pre-treatment ultrasound, pelvic examination or laboratory tests when medically appropriate, given that these tests may be significant barriers to access and, in the setting of a pandemic, may increase transmission of infection to patients and health care workers.” (emphasis added) 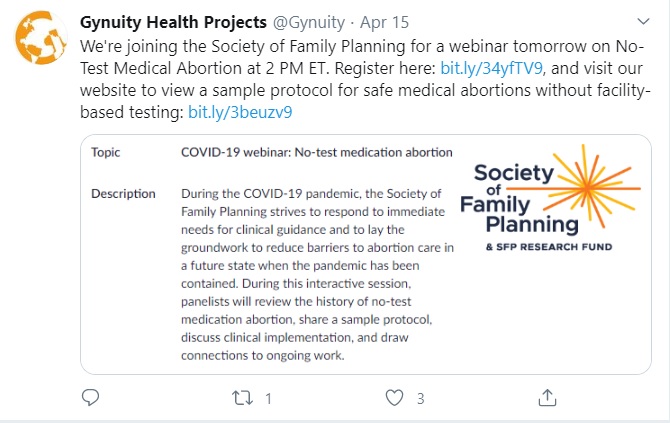 Promoters of the protocol have increased gestational age against FDA recommendations

Gynuity’s protocol states that pregnancy must be “confirmed by patient report of urine or serum test or prior ultrasound” with “last menstrual period started ≤77 days before anticipated date of mifepristone ingestion.” While a “patient report” of confirmed pregnancy is part of the protocol, no ultrasound will be required to properly determine gestational age or rule out ectopic pregnancy before a facility dispenses the abortion pill. 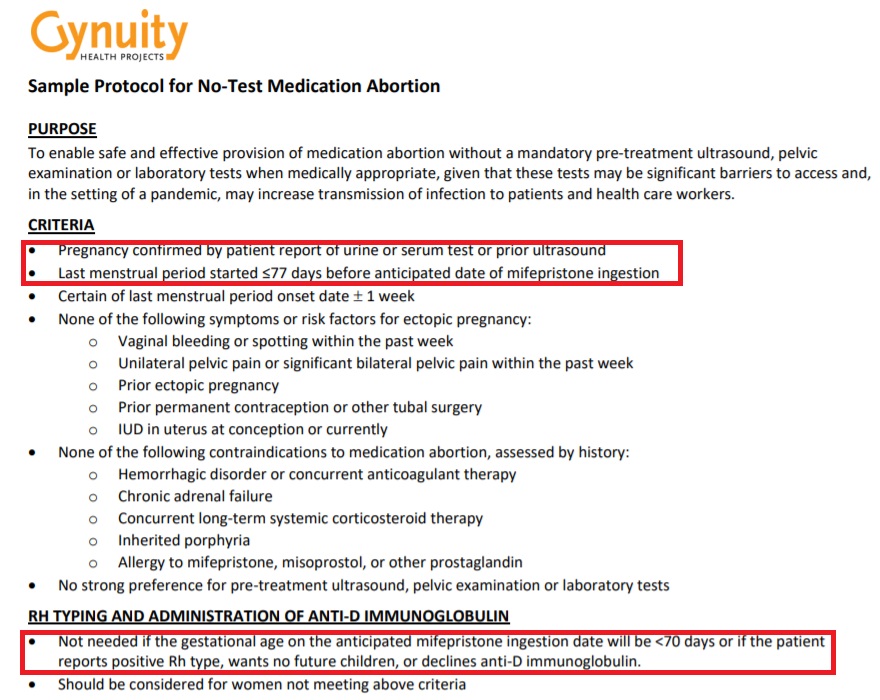 Gynuity claims that despite the implication that  this “no test” abortion pill protocol is needed because of “an acute need to minimize the time that patients spend in medical facilities and to reduce physical contact between patients and providers” due to COVID-19, it appears the protocol was planned long before COVID-19.

The National Abortion Federation’s (NAF) 2020 clinical guide — issued early in the year, well before the pandemic — states, “The use of ultrasound is not a requirement for the provision of first trimester abortion care. Proper use of ultrasound may inform clinical decision-making in abortion care.” Under “Early Medication Abortion,” NAF also shows no requirement to confirm gestational age, yet NAF approves the use of the abortion pill a full week past the U.S. Food and Drug Administration’s 70 day/10 week limit.

NAF even recommends the use of “misoprostol only” abortions — also not tested or approved by the FDA — when the abortion pill “is either not legally available or inaccessible.” See below: 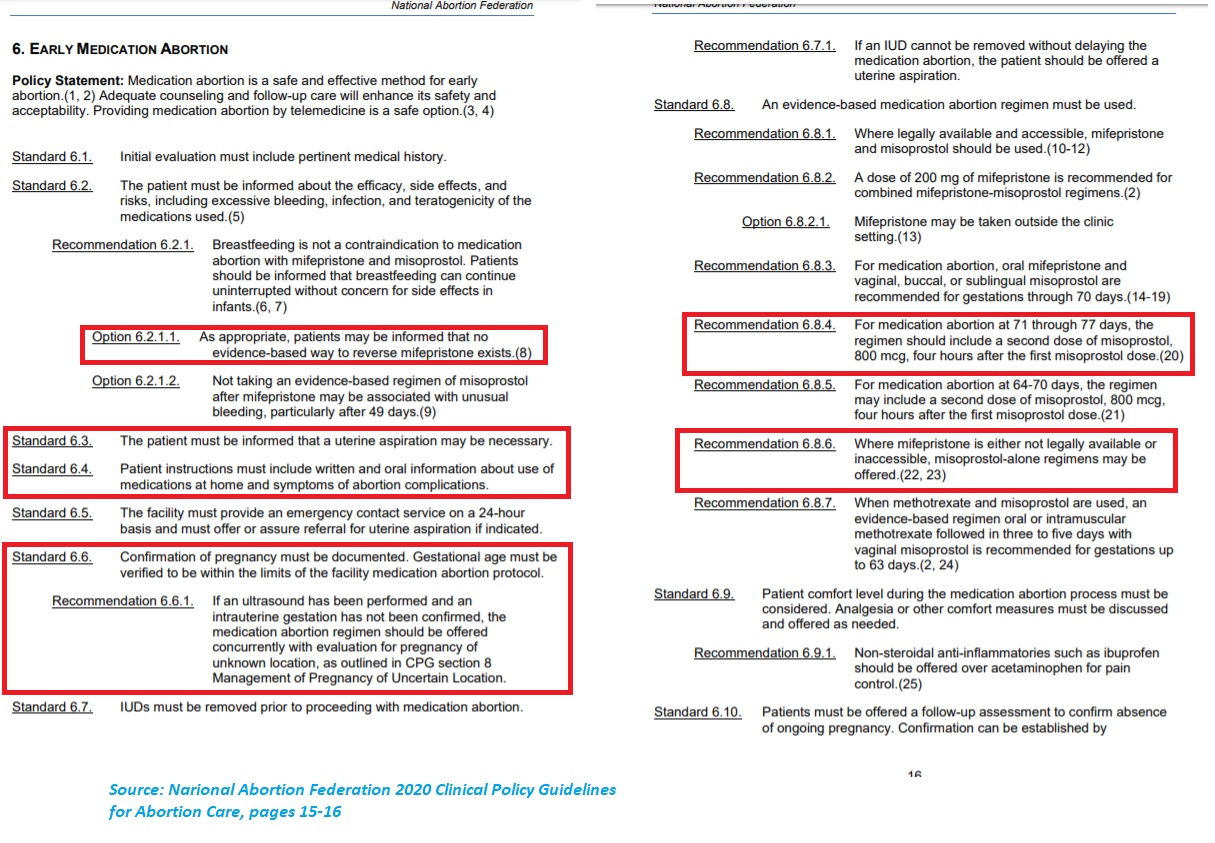 The NAF guidelines go on to describe the currently unapproved use of “medication abortion after first trimester,” recommending an ultrasound only if the pregnancy is “estimated to be more than 14 weeks from LMP.” However, with the “no-test” abortion pill protocol, estimating gestational age is left up to the patient. 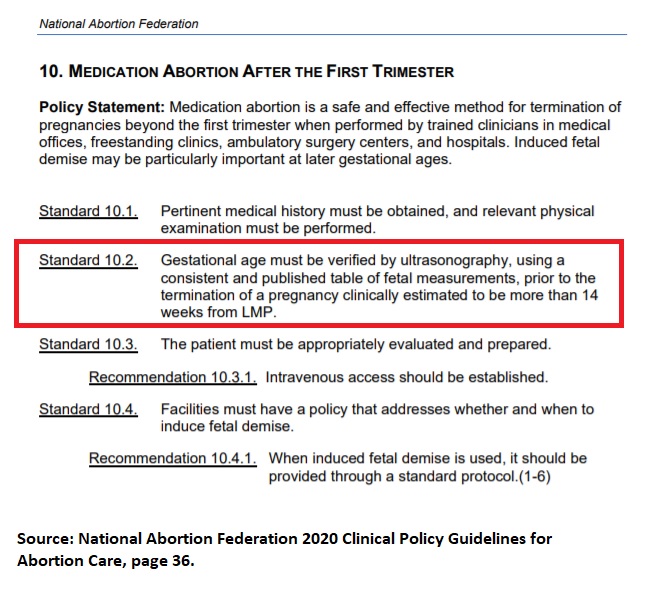 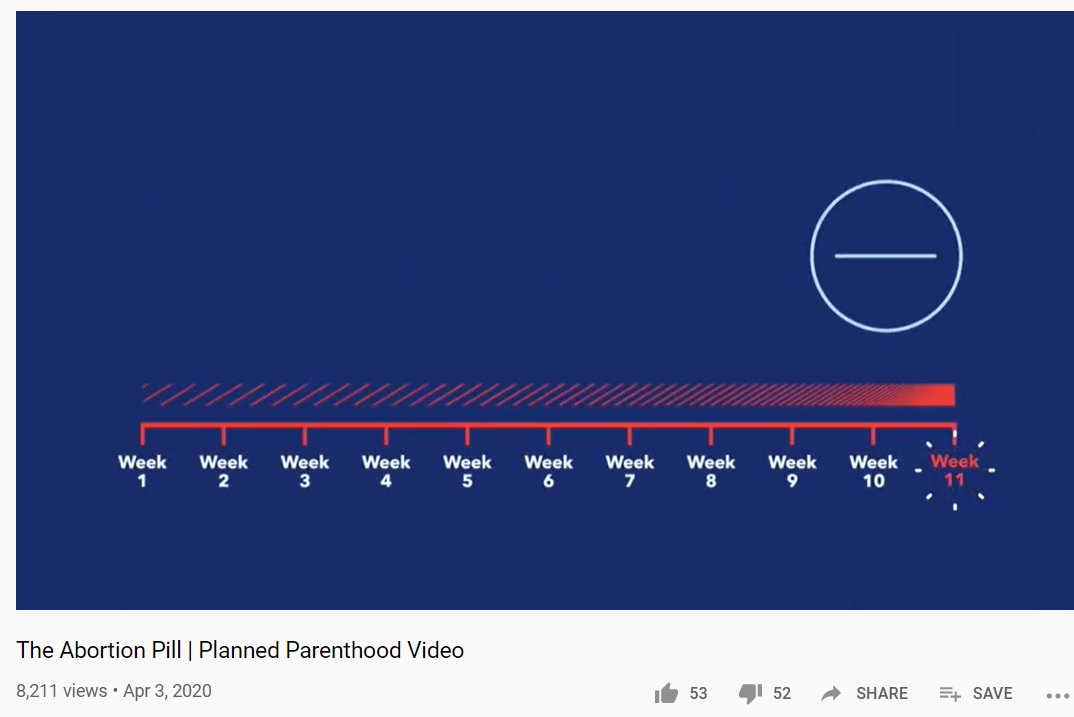 According to the FDA’s Risk Evaluation Mitigation Strategy (REMS) safety system, prescribers of the abortion pill must have the “ability to assess the duration of pregnancy accurately” and the “ability to diagnose ectopic pregnancies.” In addition, the pill regimen consisting of mifepristone and misoprostol is only approved for “medical termination of intrauterine pregnancy through 70 days gestation” — not 77 days/11 weeks or even further. 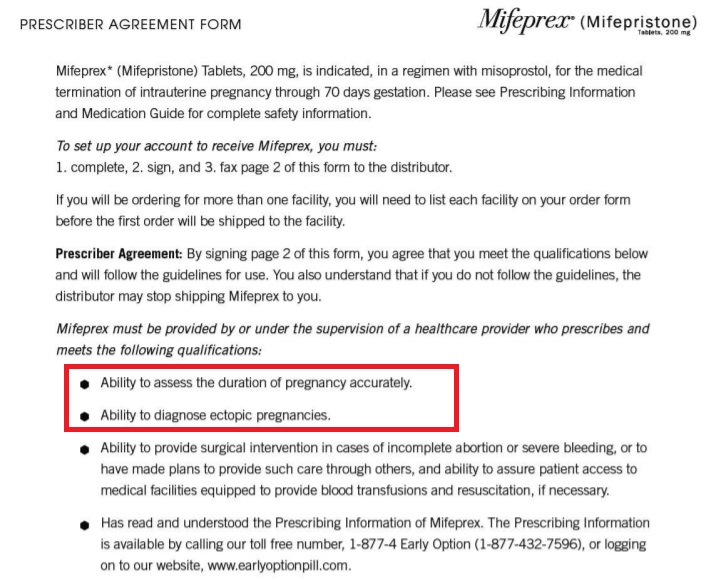 The 2019 FDA label for Mifeprex states, “For purposes of this treatment, pregnancy is dated from the first day of the last menstrual period. The duration of pregnancy may be determined from menstrual history and clinical examination. Assess the pregnancy by ultrasonographic scan if the duration of pregnancy is uncertain or if ectopic pregnancy is suspected.” After the abortion, “[t]ermination can be confirmed by medical history, clinical examination, human chorionic gonadotropin (hCG) testing, or ultrasonographic scan.” The document then clearly states that the abortion pill regimen is not to be used after 70 days (10 weeks): 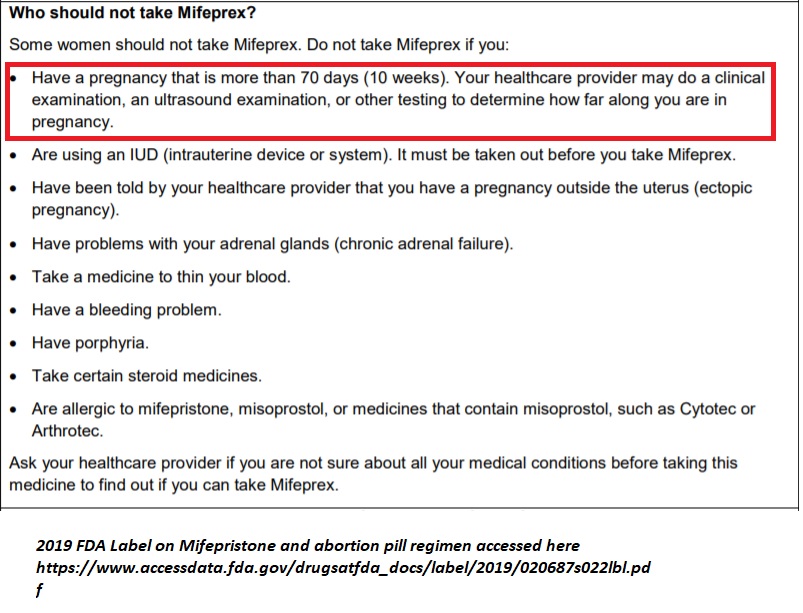 There is concern that eliminating testing could result in undiagnosed ectopic pregnancies, along with the high possibility of women incorrectly dating their own pregnancies. This is very risky for women, because the later in gestation, the greater the chance that the abortion pill will fail, requiring a follow-up surgical abortion. In the event of complications, women are frequently encouraged to go to the ER and claim to be suffering a natural miscarriage. In states which track complications from pregnancy and abortion, this skews the data in favor of making abortion appear safer, when it is not.

In part two of this series, Live Action News will share further details on what the “no-test” protocol looks like.