Prior to the forced decriminalization of abortion nationwide in 1973, the American public was told that abortion should be between a woman and her doctor. For over 40 years, despite the fact that abortion is the act of killing a human life, society has been told that abortion is “health care” which must be protected. Yet, in the days following abortion’s legalization, unscrupulous abortion profiteers with zero to little medical training flooded the marketplace, opening abortion facilities with slick marketing tricks, all in an effort to make a profit selling abortions. Today, the same thing is happening, with the advent of largely unregulated virtual abortion pill websites popping up across the nation. The old idea of abortion being “between a woman and her doctor” has been traded in for the new idea of do-it-yourself, at-home abortion.

The push for these online DIY sites was planned well before the COVID-19 pandemic, though the pandemic has been used as cover for this dangerous expansion. The opportunity arose when U.S. District Judge Theodore D. Chuang enabled abortion clients to obtain the abortion pill online and in pharmacies without important in-person visits to properly assess gestational age or rule out life-threatening ectopic pregnancies. Important safety measures called REMS, put in place by the U.S. Food and Drug Administration, were disregarded. 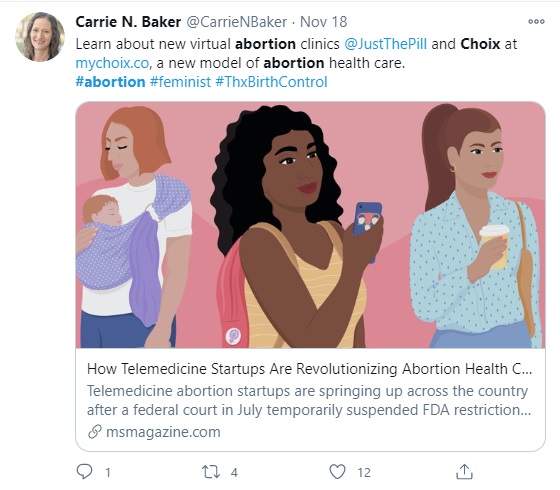 Instead of demanding state and federal oversight to protect the safety of women and young girls who access potentially dangerous virtual abortion pill dispensaries, media outlets like Ms. Magazine are promoting them as safe. In just a handful of sites reviewed by Live Action News, we learned that some of the people or groups behind these dispensary websites are unlikely to have medical knowledge needed to dispense the deadly abortion pill cocktail (mifepristone and misoprostol).

If you are interested in purchasing dangerous abortion drugs from “engineers,” with a few nurses and one doctor sprinkled in, then Choix, Inc. (“choice” in English), is your go-to abortion pill dispensary. The online website admits it is operated “by a team of nurse practitioners [Cindy Adam and Lauren Dubey], doctors [only one of whom is listed], and engineers in California.” According to Ms. Magazine, the organization began offering the abortion pill to anyone over the age of 16 on October 28, 2020, in California. Staff physician Aisha Wagner previously worked for at UCSF’s Women’s Option Center, an abortion facility at the University of California San Francisco.

“The big push in the abortion world is to normalize abortion,” Wagner told Ms. Magazine. “This is something that I think we need to shout from the rooftops.”

The cyber abortion website Hey Jane was founded by a former marketing manager named Gaby Izarra, who once “founded, built and managed an electronic music blog,” according to her LinkedIn page. Also with Hey Jane, Kaitlin Freedman was once Senior Manager at UberEATS. According to her LinkedIn page, Freedman once “conducted research on barriers to irrigation adoption among smallholder farmers in Uganda.” Because for now, access to the abortion pill requires a prescription, Hey Jane has a medical director — New York physician Kate Shaw Baron. The website plans to launch in California, New York, and Washington to provide the abortion pill to “anyone with a uterus” aged 18 or older. These three states require little oversight of brick-and-mortar abortion facilities and online abortion pill websites are likely to receive similar treatment.

Started as a Minnesota not-for-profit abortion pill dispensary, Just The Pill has been described by Bustle as a “mobile reproductive health clinic.” Though the organization’s website claims it was founded by “licensed doctors,” limited information on JTP’s website prevents us from confirming this. The company’s corporate name is JTP Professional Service Corporation, and records on file with the IRS show an address of 2038 Ford Parkway 444, Saint Paul, MN 55116. Additional online information lists Brooke Bailey as JTP’s executive director, but little information about Bailey is given. The organization’s medical director (see Twitter and Kareo.com) is Julie Amaon, who formerly managed a Planned Parenthood in Austin, Texas. In addition to its online sales, JTP’s mission is “to expand [abortion] access in rural Minnesota” by driving through the state with a mobile abortuary of sorts to “target rural communities.” Just the Pill is also a member of the Abortion Care Network and the National Abortion Federation. Numerous NAF facilities have been found to be substandard.

In June of 2020, Just The Pill applied for COVID-19 Telehealth Funding offered through the taxpayer-funded Federal Communications Commission. It is unclear whether the dispensary received the grant, but it is obvious the abortion pill dispensary is, in its own words, “taking advantage” of the COVID-19 pandemic, even referring to Judge Chuang’s court order on its donation page as a “tremendous opportunity.”

And no doubt, it is a money-making opportunity for the abortion industry, as abortion pill sales are estimated to gross approximately $200 million annually. 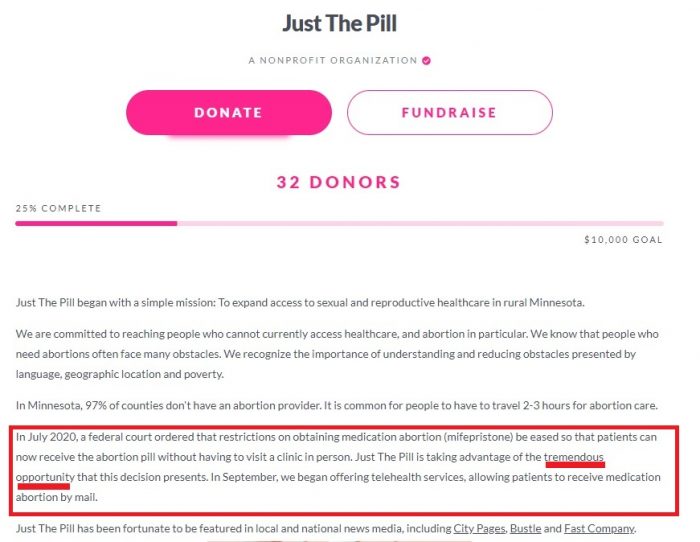 Among all of these sites, Hey Jane seems to be the most forthright, noting some of the potential risks women face in obtaining abortion pills online.

“If someone other than you opens the package that you’re mailed, they could find out that you are having an abortion,” the site states, also noting an increased risk of “undiagnosed ectopic pregnancy.” The site also warns that a woman’s “pregnancy dating… could be inaccurate.” This, says the website, could result in “more bleeding or the treatment may not work.”

If the abortion pill fails, it can either mean that the baby is still alive, or it could mean that the baby’s remains are still in the woman’s uterus and could cause an infection. It could also be indicative of a deadly ectopic pregnancy which needs immediate medical attention. Tragically, the abortion pill has already killed dozens of women and sent thousands to the hospital with serious complications. It has also ended the lives of about four million preborn human beings.

In a recent op-ed about the expansion, Ingrid Skop, M.D., a Fellow of the American College of Obstetrics and Gynecology and a Charlotte Lozier Institute associate scholar, summed up the present situation well: “It seems clear that unregulated chemical abortion is not compassionate care for women, but rather, a dangerous ‘chemical coat-hanger.'”