The abortion industry has typically opposed efforts to ensure that women considering abortion view an ultrasound image of their preborn child prior to the procedure, yet there is an indication that abortion providers are now offering women the option to see the remains of their aborted children. The same abortion industry that claims viewing a child alive on an ultrasound screen prior to an abortion might be traumatic is now claiming that seeing an aborted child is a good thing for women. But there are some theories as to why the industry may now be pushing for this. Bradley Mattes shared one of these theories about what has been termed “patient-centered pregnancy tissue viewing (PCV)” at Life Issues:

Most abortions are done within the first trimester of pregnancy using suction curettage which is many times stronger than a home vacuum cleaner. Just as an apple dropped into a blender doesn’t resemble an apple, a baby aborted by such powerful suction doesn’t look much like a baby in the pulverized aftermath.

The goal of PCV is to permit women the opportunity to view what abortion staffers deceptively call the “product of conception” which they believe will have a “destigmatizing effect” on abortion and portray pro-lifers’ fetal images as fraudulent lies.

“PCV demonstrates the desperation of abortion businesses’ attempt to overcome the humanity of the unborn child. But like their other schemes to hide the reality of what they do, the unmistakable truth will inevitably come out,” Mattes wrote.

WARNING: Images shown below may be disturbing to readers.

A study published in 2008 concluded, “It is feasible to offer women having abortions the choice to view the products of conception and for most, viewing does not make it emotionally harder for them.” That survey found that abortion clients were “more likely to want to see products of conception if they were younger and had not had children.”

A separate 2008 review of published literature stated that “[d]espite an absence of empirical evidence, most articles concluded that viewing of the fetus by women post termination of pregnancy for fetal anomalies is beneficial and should be promoted.”

In addition, the TEACH abortion training manual for 2020 (image below) states, “In first-trimester abortion, many providers explain the process of fetal development and show the patient the pregnancy tissue if asked. Consider describing what the pregnancy tissue looks like at that stage, so they can make an informed choice about seeing it.”

Note that the manual also points to a 16-year-old study to claim that fetal pain is unlikely until the third trimester, when recent studies have indicated that preborn children likely feel pain before end of the first trimester.

READ: The humanity of the preborn child is real, and abortionists know it 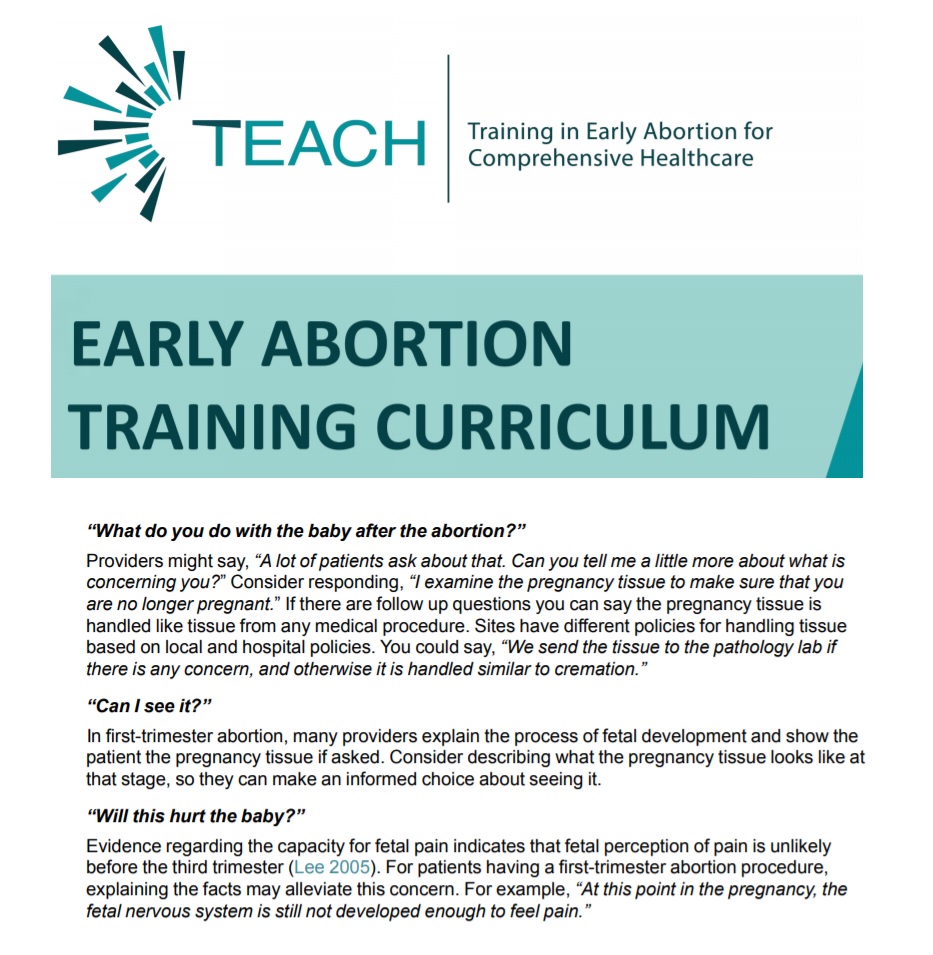 Later Abortion Initiative’s (LAI) 2021 fact sheet reiterates the claims: “Patient-centered pregnancy tissue viewing (PCV) is a client-centered approach to reproductive health care that gives clients the option to view their products of conception after pregnancy termination… pro-choice advocates have recently posed a framework for discussing abortion that acknowledges both the pregnant person’s right to choose and the reality of the demise of the fetus that can cause feelings of guilt and sadness and sometimes represents the loss of a wanted pregnancy,” LAI states (emphasis added).

In a review of abortion worker and client attitudes on “The Option to Look,” authors Lena R Hann & Andréa Becker surveyed, “administrators from 22 independent abortion clinics affiliated with the Abortion Care Network about their PCV practices.” Abortion workers interviewed by the study’s authors noted that “[t]he length of gestation, and whether the tissue had identifiable fetal parts, impacted most participants’ initial comfort with seeing it….”

Authors noted that some participants couched the decision to view aborted children in terms such as, “exercising choice and control during the abortion, satisfying their curiosity, and receiving visual reassurance that the abortion is complete.” They also described it as “gaining closure” that can assist the “grieving process” in the tradition of “viewing the body at a family member’s funeral,” claiming, “results indicate that most of the clinics that provide PCV do so by patient request.”

“Tissue may be shown floating in water in a clear dish, lit from beneath by a light; this is the same way clinicians examine post-abortion tissue to ensure the abortion is complete,” they wrote. “Providers may opt to show just the specific pregnancy tissue (as opposed to all tissues removed from the uterus) to the patient after a clinician has examined it. Some providers will point out aspects of the tissue (sac, villi, and pregnancy) while others will allow the patient to look and ask questions as needed.” Note the use of the term “pregnancy” to unscientifically describe the embryonic/fetal human being. 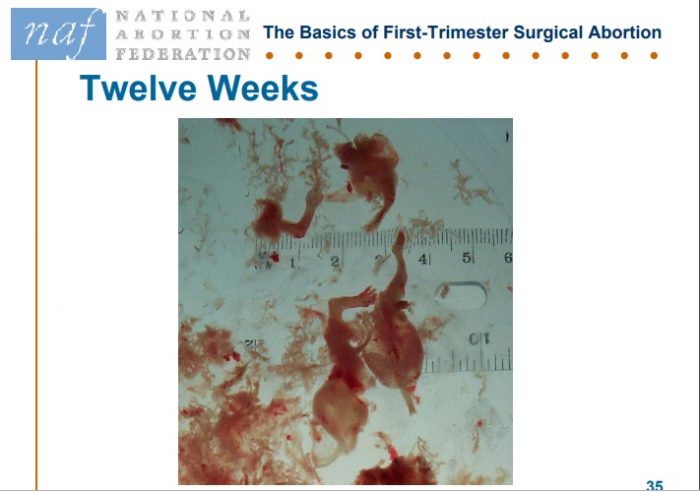 “Providers report that seeing the tissue itself “makes it more real” than simply viewing an ultrasound image and that some patients request hand and footprints and, in infrequent cases, request taking home the tissues.”

Hann and Becker’s study was supported in part by the Abortion Conversation Projects (ACP), which is funding the printing and distribution of Hann’s “Fetal Tissue Viewing Guide” for abortion facility staff. So it was no shock when they claimed that “anti-abortion misinformation about fetal tissue impacts the ways providers must navigate complex conversations about PCV professionally and personally.”

“[…R]espondents frequently mentioned the impact of protestors’ signs outside the clinics, as well as misinformation online, and the way these inaccurate images of fetuses shape expectations of aborted pregnancy tissue. Such images contribute to internalised abortion stigma and a dearth in the knowledge of pregnancy tissue, which is then challenged when a patient views their own tissue,” the authors wrote, referring to the remains of a preborn child in as dehumanizing a way as possible.

“Much of the misinformation surrounding fetal tissue results from anti-abortion advocates showing medically inaccurate and heavily doctored fetal images to dissuade pregnant people from seeking abortions,” LAI’s fact sheet claimed. “In reality, the appearance of the fetal tissue resulting from an abortion depends greatly on the gestational age of the pregnancy, the type of abortion procedure used, and the presence or absence of fetal congenital anomalies; most post abortion tissue will not look like the recognizable, intact fetus presented by abortion opponents.”

It should be noted that some pro-life images of abortion victims utilize objects such as coins in the photos for scale, like the image below. This does not make the image “doctored”:

In fact, though the abortion industry regularly refers to images shown by pro-lifers as “fake,” Live Action News recently unearthed what appears to be a presentation connected to the National Abortion Federation (some images above taken from this presentation), which supports the idea that images of abortion victims published by pro-life groups are actually authentic.

Planned Parenthood’s website even features a section on fetal development which acknowledges that at 5-6 weeks [gestation], “A very basic beating heart and circulatory system develop.” This is yet another tacit admission that the abortion industry is fully aware that the life in the womb — the life that is violently eliminated during an abortion — is human.

The question is, if the abortion industry is fine with showing women the shredded and torn remains of their aborted children, why do they fight so hard to prevent them from seeing their children while they are still alive?