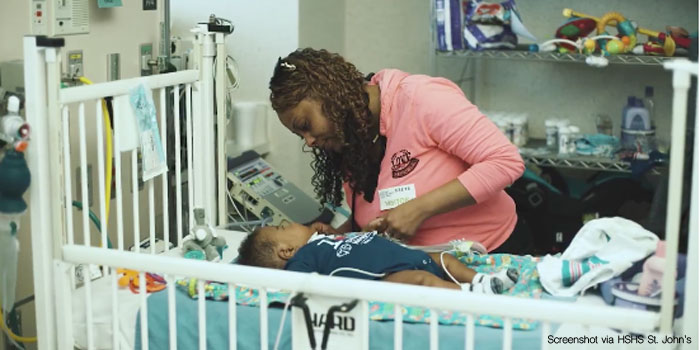 Premature baby Mylas was born at 23 weeks after his mother, 28-year-old Sheena Malone, was tragically killed as a result of a drive-by shooting on May 30, 2017. Delivered by emergency C-section at HSHS St. John’s Children’s Hospital in Springfield, Illinois, Mylas has undergone multiple surgeries and struggles, but has at last gone home with his paternal aunt, Sanatra Sullivan, who is now his legal guardian, after spending eight months in the NICU.

Mylas’s aunt said that because police needed her family at the house as witnesses after the shooting, none of them were able to be at the hospital. “Not even two, three hours later, she was gone,” Sanatra tearfully said of Mylas’s mother.

Mylas weighed just over a pound at birth, according to nurse Audra Koons, featured in the video, and staff often feared he, as an extremely premature baby, wouldn’t survive. “We didn’t know what his outlook was. One day, he was doing great, and the next day, we thought he might be seeing angels soon…. His outlook now is amazing, considering where he came from.”

“He’s a miracle,” Koons added. “He has a purpose in this world, no doubt…. A lot of babies that start out that young can have some neurological issues, and he doesn’t have that, and there’s no other word for it than ‘miraculous.'”

READ: These unsung heroes of the NICU help premature babies just by holding them

A May 2015 medical study, published in the New England Journal of Medicine, reports that roughly 25% of babies born at 22 weeks gestation would survive if “actively treated in a hospital.” Even without extra treatment, a small number of these babies survive. A September 2015 study, published in the Journal of the American Medical Association reported that survival rates for babies at 23 weeks gestation has improved to 33%; at 24 weeks, the survival rate is 65%.

All of these babies were born at 23 weeks and survived: Arthur, twins Albert and Dolly, Abiageal, Eirianna, twins Imogen and Annabelle, and Trevor. There are many more. And Mylas’s name can be added to that list.

Austin, Willow, Aharon, and twins Hunter and Darcy all survived after being born at 22 weeks, and some babies have survived being born even younger.

Of course, if a premature baby is deliberately not offered lifesaving care, as has been the case far too many times, he or she has zero chance of survival.

These babies aren’t clumps of cells by any stretch. Babies Mylas’s age — and far, far younger — are highly complex, and are human beings from the moment of conception/fertilization:

“We’re excited. This will be the first day of new life for both of us,” Mylas’s aunt Sanatra said on the day of his departure from the hospital. To celebrate his release from the hospital, St. John’s staff invited all of the first responders and those who helped to care for Mylas and his mother before she passed away.

“To be a part of his journey — I’ll never forget it,” said Koons emotionally.

While, according to local news station WAND-TV, “[p]olice say Malone was not the intended target in the drive-by shooting,” shockingly, the leading cause of death for pregnant women is homicide.

Mylas is now 10 months old and continues to do well.