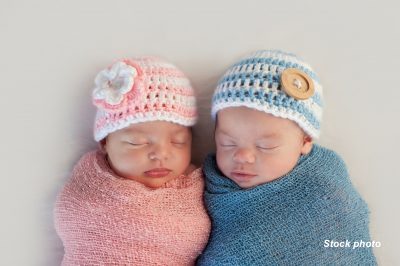 Twins born in the United Kingdom are being called miracles after they were born at just 23 weeks. It’s believed they are some of the youngest babies to ever survive in Britain — and they were born just one week shy of the abortion limit.

27-year-old Shona Jeffery went into labor when she was just 22 weeks and six days pregnant. Originally, doctors told her that her children were too young to survive — by a single day — and that they could not intervene. “They said there was nothing they could do for us and sorry that we had lost our babies as they was under the 23 weeks,” she recalled. “They had no facilities to help if they arrived. They would just pass them to us once they had been born and they then put us in a room for this to happen.”

But somehow, the babies — now called “Twinvincible” by British news — managed to tightly hang on to life throughout the night, taking Jeffery to 23 weeks gestation. And with that movement of just 24 hours, doctors said there was a slim chance the babies could be saved. Jeffery asked the doctors to do all they could to keep the twins alive. Doctors gave her a steroid injection to help the babies’ lungs mature and transported her to Brighton Hospital via ambulance, where specialists were ready to take the babies into the neonatal intensive care unit.

First to be born was Dolly. Then, to everyone’s surprise, Jeffery’s labor stopped. Five days later, Albert was born. Both babies needed surgical interventions, as Dolly had a hole in her heart, and both twins required eye surgery. But both of the little ones were strong enough to be treated. Now, both twins are healthy and strong enough to have left the hospital, and are at home with their parents.

While Albert and Dolly had parents who were willing to fight for them, other babies aren’t so fortunate. At 23 weeks in the United Kingdom, babies can still be aborted, even though Albert and Dolly serve as living proof that these babies are human beings capable of surviving outside the womb. And as medicine continues to advance, babies will be capable of surviving even younger — like baby Austin, born at 22 weeks, who is also being touted as a miracle.

Still, however, babies like Austin, Dolly, and Albert are free to be aborted if their parents so choose. Mere days separates these babies from medical care after birth and being left to die, even when their parents do not abort them.

One common method of aborting these babies — D&E abortions — is particularly violent and gruesome, as former abortionist Dr. Anthony Levatino explains in the video below. The other type of late-term abortion used, induction abortion, is described here.

While viability continues to move earlier and earlier in pregnancy, the fact also remains that viability is just a marker of when a preborn child can survive outside the womb. Science makes it clear that every child is a human being from the moment of conception, even if they can’t yet survive outside the womb. Each of these babies deserves the right to live, no matter what age or stage of development she is in.