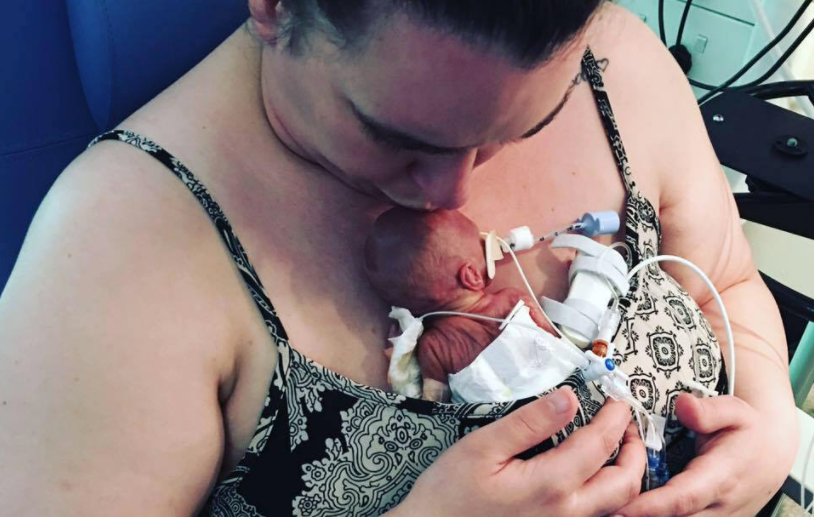 Baby boy Austin Douglas weighed just one pound, four ounces when he was born at 22 weeks gestation on March 31, 2017. Doctors had little hope that Austin would survive, but after weeks in the hospital in Britain, he is doing so well that doctors expect him to be able to go home in July with his parents Rhys and Helen.

Austin’s mother Helen Douglas went into premature labor. By the time she arrived at the hospital, she was fully dilated, and there wasn’t anything doctors could do to stop the labor.

“We were asked if we wanted medical assistance for him, given how premature he was,” Douglas told the Daily Mail. “I told doctors that if he came out breathing, I wanted them to do everything they could and they did.”

Austin’s skin was still translucent, and his lungs and ears hadn’t fully developed. The medical team took him straight to an incubator and did everything they could to help him live. He was later transferred to Birmingham Heartlands Hospital, where he developed a lung infection twice. His prognosis was initially not good, but Austin is now being cared for at Leicester Royal Infirmary and has improved enough that doctors hope he can be discharged by his original due date of July 28.

According to the Daily Mail, Douglas has polycystic ovary syndrome and therefore calls Austin a “miracle twice over” since she didn’t think she could even have children.

“When I found out I was pregnant, I was ecstatic,” she said. “I love him so much and I’m so grateful for all the care he’s had.”

Austin still has a long way to go, but his life is a testimony to the fact that preborn children are living human beings.

Believing that we should be able to kill a child because he hasn’t reached the predetermined age of 24 weeks gestation doesn’t make any sense when you see a child like Austin. Abortion is completely legal before the 24th week of pregnancy in the United Kingdom. The D&E abortion procedure, explained below by former abortionist Dr. Anthony Levatino, is commonly used up to 24 weeks and is the most common second-trimester abortion procedure used in the United States.

Even under the guise of “viability,” 24 weeks is not a proper standard for the right to life. Viability is a moving target as babies are constantly surviving earlier, and science has unequivocally proven that human life begins at the first moment of our existence.

This tiny baby proves that preborn children are not what pro-abortion groups would have us believe they are – clumps of cells or lumps of tissue or merely “potential life” until birth occurs. These small human beings are persons at every moment of their lives. Yet they are legally denied the right to their own lives, despite their identity as the most innocent and vulnerable people in existence. Every baby, at every age, deserves a chance – just like the one Austin received.