Many hospitals won’t provide life-saving care to a baby born before 23 weeks gestation. It isn’t part of standard care. Thankfully for Cortney and Peyton Noland and their daughter, Willow, their doctor thought otherwise.

Willow was born at 22 weeks, weighing just one pound, five ounces. Babies born that young often don’t survive; but if they do, they frequently face countless medical challenges, including cerebral palsy and developmental delays.

“When I was a resident back in 1999, people said nobody under 24 weeks can ever survive; and now 23-weekers are surviving routinely,” Dr. Edward Shepard, chief neonatologist at Nationwide Children’s Hospital told The Columbus Dispatch. “Now, people are saying under 23 weeks really can’t survive, and there’s Willow, who was 22 weeks.”

In fact, a study published in the New England Journal of Medicine in 2015 revealed that when given “active treatment,” 23 percent (far higher than what was previously estimated) of babies born at 22 weeks survive.

Willow was due to be born in July, but arrived during a snowstorm on March 4, 2015, according to The Columbus Dispatch. The placenta had detached from the uterine wall, and both mother and daughter had developed infections. Doctors weren’t certain if either of them would survive.

As writer JoAnne Viviano reports, Noland’s doctor arrived at the hospital and asked for a team to be ready to resuscitate the baby and take her to Nationwide Children’s — a decision that saved Willow’s life. Willow was delivered by C-section and hooked with a tiny tube to a breathing machine. Her mother describes her skin as being “like jelly” and her head was bruised, and eyes sealed shut.

Willow had sepsis, intestinal disease, and a lung disorder. At just one week, Willow underwent her first surgery to fix a perforated bowel, and would need a second surgery for a bowel obstruction. She was then diagnosed with bronchopulmonary dysplasia. Half of the infants who are diagnosed with this condition do not survive, and those that do can suffer long-term brain damage, according to Dr. Shepard. 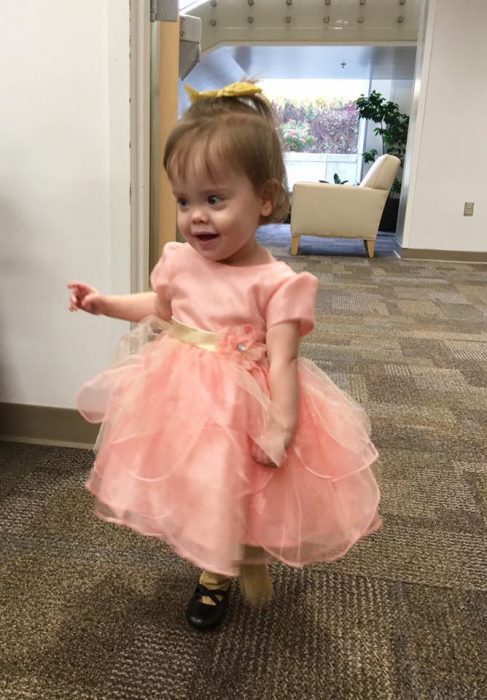 Willow received treatments to aid in brain development, and was placed in a special center at Nationwide Children’s created exclusively for bronchopulmonary dysplasia patients. The patients there aren’t subjected to as many lab tests, and noise and light levels are kept low. Parents are taught to use Kangaroo Care for their children, which the Nolands did for as much as 12 hours a day, holding Willow to their chests with skin-to-skin contact.

Seven weeks after Willow’s birth, an update was posted on the family’s GoFundMe page: “As far as her health she’s doing great. […] Her heart and brain are still in great condition, a blessing we didn’t expect to have. She does have BPD which is a lung disease, but her lungs are growing! Thanks to Children’s Hospital our baby is alive and as well as she can be.”

Willow would spend a total of 236 days in neonatal intensive care and undergo a total of four surgeries. Her parents were asked numerous times if they wanted to stop her care and let her die. They refused. Her mother calls her a “miracle.”

The Nolands told The Columbus Dispatch that as they recently watched 20-month-old Willow on the playground, they knew they had made the right choices.

“That was kind of that moment when I was like, ‘We did good. We chose right,'” her mother said.

Against all odds, doctors found ways to save both mother and child during a medical crisis at just 22 weeks gestation, and even when doctors wanted to withhold care, her parents refused to give up on her. Willow proves that life is always worth fighting for.