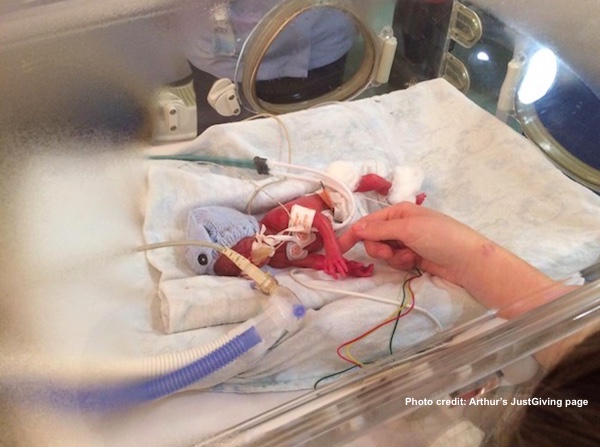 In the United Kingdom, healthy preborn babies can be aborted up to 24 weeks of pregnancy. But little Arthur Brumby proves just how wrong this is. Arthur, a premature baby, is one of the youngest to ever survive in Britain, born at just 23 weeks. He weighed just 1 pound, 2 ounces.

His parents, James Brumby and Laura Hillary, both have health problems that doctors believe could affect their fertility. Brumby has Crohn’s disease, and doctors said the treatment he was undergoing could prevent him from being able to have a baby. Hillary was found to have pre-cancerous cells on her cervix, which were burned away. She also has endometriosis. Brumby and Hillary got engaged, and not long after, discovered they were, against all odds, pregnant. “I couldn’t believe it,” Hillary said. “We’d not been using contraceptives for years, as we were told it was unlikely it would happen naturally.” The ecstatic couple had the pregnancy confirmed, but doctors soon discovered that Hillary’s cervix was shorter than the average cervix, putting her at risk of miscarriage. By 20 weeks, however, little Arthur was still growing strong.

But it didn’t take long for things to go south. “Doctors said my cervix had shrunk to 1.8cm. It was funnelling and preparing for labour,” Hillary said. They did an emergency cerclage to keep her cervix from opening any further, but it made no difference. Arthur was coming, and Hillary’s water broke. “It was coming out like a slow-release tap. I was in labour. I was only 23 weeks and one day pregnant,” she said. “We went into absolute panic mode. We rang the hospital and they said to come in straight away.”

Hillary was put on three days of bed rest, but Arthur was born early, and doctors told the couple that he would likely die. But Arthur was ready to prove them wrong. “He was clearly fighting to be there,” Hillary said. “The doctors were trying to put tubes in him and he was fighting them off. It was amazing to see.” He was taken to the NICU, had sodium and blood transfusions, and was even placed into a plastic bag to mimic the womb before being put into an incubator. “He had wires coming in and out of him and was tiny,” Hillary recalled. “His skin was scaly because he was so premature. But he was wonderful.”

After one month, Hillary was finally able to hold her baby boy. Arthur has had two brain bleeds, fought E. coli, will likely need heart surgery, and is expected to stay in the hospital until March. But Hillary still calls him her “Christmas miracle.” “He shouldn’t be here, but he is,” she said. “And he is wonderful.”

Arthur, and other premature babies like him, prove that an arbitrary date like 24 weeks is meaningless. Originally chosen because 24 weeks is commonly seen as the point of viability, medical advancements have pushed viability earlier and earlier. Amillia Taylor survived at just 21 weeks and six days; Frieda Mangold at just 21 weeks and five days. Courtney Stensrud’s daughter also survived at 21 weeks even after doctors told her there was no hope. And recent studies have confirmed that up to 71 percent of extremely premature babies can survive if given active care instead of just palliative care.

The fact that these babies are living after being born so early should make it abundantly clear that they are also living in the womb; there is nothing magical about the act of giving birth that transforms the baby from a clumb of cells into a human being. These are living, human babies, who deserve to be protected, not condemned to death.