Tiffany Fabiano is working hard to the keep the memory of her daughter alive and bring meaning to her short life. In 2003, when Fabiano was just 17 years old, she gave birth to a premature baby girl named Adrianna Lynn at just 23 and a half weeks gestation. The hospital where she was born in Mississippi, like many others, did not consider a premature baby like Adrianna to be viable, therefore, despite the fact that she was breathing, medical staff didn’t help her.

“The hospital did nothing for [her.] [T]hey didn’t even try,” wrote Fabiano on her Facebook fundraising page. “They did not even do so much as bathe her or suck her airways out. [They] wrapped her in a blanket and quickly left the room.”

Before Adrianna was born, Fabiano had repeatedly gone to the emergency room feeling that something wasn’t right. The hospital continued to send her home until finally agreeing to run tests. That’s when they realized she had an infection of the amniotic fluid but had already sent her home.

“When they received the results I had just made it home and was in so much pain (labor pain) that Her father had to carry me back to the car to get me back to the hospital,” she wrote. Fabiano states that the on-call doctor never informed her doctor of the situation and after her water broke, the nurse didn’t believe her that the baby was crowning. But once the nurse saw the head for herself, she told Fabiano to “hold [the baby] in”. 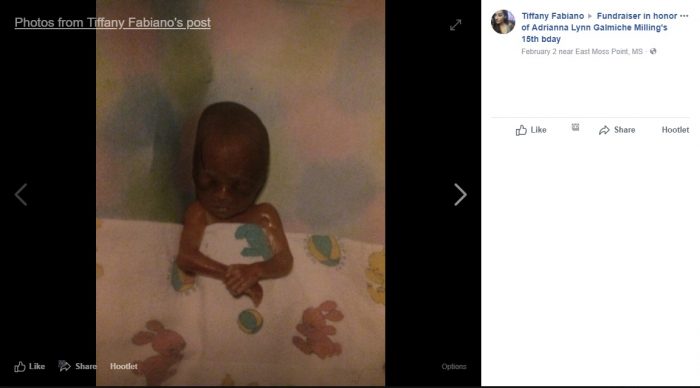 Adrianna was premature, and doctors refused to help her.

“At 1:40 am Adrianna was born very much alive, the younger nurse started trying to grab the things you would get during a birth together and the nurse looked at her and said there is nothing that can be done the shock on the young girls face told it all. So she wasn’t bathed airways weren’t cleared wasn’t tested for viability she was wrapped in a blanket and handed to me my mom still in shock was saying how beautiful she was and Adrianna even held her finger for a while,” wrote Fabiano. “Then nurses started running in and [tearing] the heartbeat and contraction papers out of monitors. They knew what they did they murdered my (our) daughter. They didn’t want proof that she was alive at the time of her birth and those papers were all the proof anyone needed.”

According to Fabiano, Adrianna lived for “what seemed like hours” struggling to breathe. When her doctor was finally informed of the situation, he arrived at the hospital and showed his anger at what the hospital staff had done.

“We were so in shock while it was happening almost frozen it seemed like everything was happening so fast but it lasted what seemed like forever,” Fabiano told Live Action News. “I just held her and stared down at her struggling for every breath struggling to live fighting for it. I couldn’t say a word. I couldn’t cry. I couldn’t scream for help. All I could do was hold her, just hold her and be with her and suddenly I didn’t notice any sounds or people or machines, no other noises except for my breathing and her breathing and when she couldn’t fight anymore I just held her while she drifted slowly home. I stayed frozen not really able to say anything or express any kind of emotion for at least a week.”

Her boyfriend watched as the nurse carelessly swung the premature baby girl “like a doll” as she carried her down the hallway after her death. The medical team refused to provide a death certificate or birth certificate, insisting instead on a stillborn certificate, which Fabiano believes was to cover up their actions.  There seemed to be no care, consideration, or compassion for the life or loss of little Adrianna.

“For years all that played through my mind was holding that precious girl as she struggled to breathe so hard her lips poked out and her chest went up and down and I had to helplessly hold her and just comfort her until she finally let go and quit fighting,” wrote Fabiano. 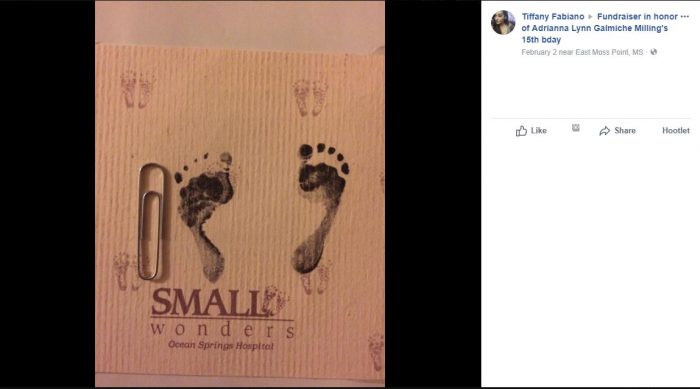 Though premature, Adrianna deserved a fighting chance at life.

15 years later, Fabiano now sees a purpose for her daughter’s life and the suffering she and her family continue to go through. In honor of her daughter, she decided to raise funds to support Live Action in an effort to end abortion in Adrianna’s memory.

“Until I found this organization and really started reading into it and see the lives and laws they have changed I finally after almost 15 years [see] a purpose for what we all endured and still do everyday,” she wrote. “If Adrianna’s story saves even just one child or changes one young girls mind who was thinking abortion was her only option [because] she believed what she was carrying was just tissue but sees now that whole perception is wrong or if her story can help Live Action financially and change laws giving mothers back their rights to decide that their child live! Then my sweet Adrianna although not here long will have made enough impact for me to see a purpose in it all, one life is enough for me. Because until you experience it you cannot possibly understand it what it does to you to be so helpless and have to watch your baby [that] you are suppose[d] to protect struggle to live and you can’t help her.”

Fabiano says that Adrianna showed her unconditional love and was a fighter who deserved to be treated with dignity and respect. She hopes that women facing unplanned pregnancies will choose adoption over abortion and that people realize legal abortion doesn’t give women choice but takes it away as many women turn to abortion because they feel they have no other choice.

While children born at 23 weeks gestation like Adrianna do not always survive, the age of viability has moved to as young as 21 and a half weeks, thanks to medical advances. Premature baby Amillia Taylor was born and survived at just 21 weeks, six days. Another premature baby, Frieda Mangold, became Europe’s most premature survivor when she was born at 21 weeks, five days. If Adrianna had been given proper medical attention, she could have survived.

Despite this, abortion remains legal in the United States through all nine months of pregnancy, and though Congress recently voted to ban abortion after 20 weeks, the Senate bill failed to pass.