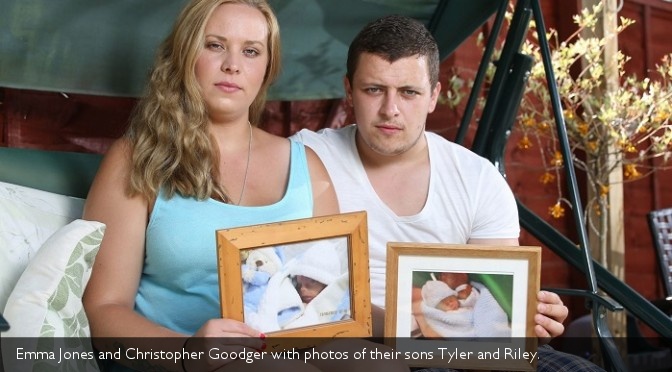 Riley Goodger was only 22 weeks and three days along when his mother, Emma Jones, went into labor in December of 2013. His older brother, Tyler, had been stillborn in 2012, so his mother was understandably frightened and heartbroken to be going into pre-term labor.

Riley weighed only 480 grams, but he was breathing independently. He had a fighting chance, but according to Wales Online, the medical team refused to treat him because Riley was born eight days before the existing abortion cut-off. Jones told Wales Online:

He wasn’t crying, but I could see he was breathing – and his heart was beating through his chest wall. But no care could be provided for him even though he was living.

I was incredibly tired after just going through labor, but my mother, father and partner tried everything they could to get the staff to change their minds. They were begging because they knew what had happened with my previous son, and they felt it couldn’t happen again. It was heartbreaking.

Jones and her partner, Christopher Goodger, live in Wales, where the abortion is illegal after 24 weeks.  According to Wales Online, research shows that most babies born before 23 weeks either die, or have disabilities. Therefore, life-saving measures aren’t usually taken unless a baby is born after 24 weeks’ gestation.

Jones is hoping to change that. She is asking the Welsh Government to change its guidelines, and allow doctors to immediately review and weigh every baby born after 22 weeks, so the parents and doctors can make an informed decision on how to care for the baby. Jones said her fight is more complicated due to the lax abortion guidelines.

“I’d heard stories elsewhere of babies being born at 21 weeks and surviving,” Jones told Wales Online. “I have so many mums and parents needing this to be changed. I’m not only doing this in the memory of Riley, but to save babies like him, who this time will have someone speaking up for them. I will fight this to the end, and with all hope, change the national guidelines on this. Every baby should be treated on their individual condition. I believe if staff had treated my baby, he’d still be alive today.”

Jones gathered 2,759 signatures for her petition, and that petition is currently being reviewed by the Assembly’s Petition Committee. She is supported in her efforts by Assembly Members William Powell, Russell George, and Lindsay Whittle, and Shadow Health Minister Darren Millar. Meanwhile, Wales Online has reported that Health Board Chief Adam Cairns has reached out to Jones and apologized, saying more could have been done to save baby Riley. He said new protocols will now be in place to support families and staff when a loved one dies in the hospital.

While Jones is happy to have received an apology and is glad the hospital is making changes, she will continue to fight for the law to change gestation dates from 24 to 22 weeks, in hopes that young lives can be saved.