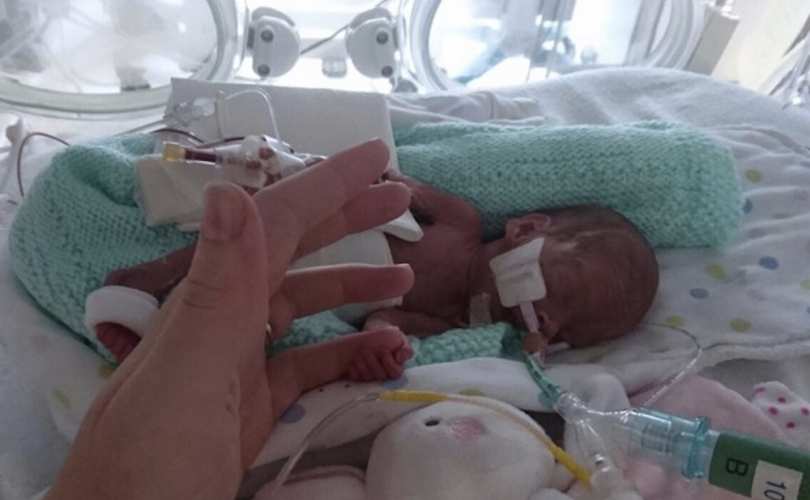 At the time of the operation, she was less than 24 weeks from conception.

Louise Peters, 32, went into premature labor at home while only 23 weeks along in her pregnancy. At that gestation, a baby is unlikely to live.

But her little girl did live. She was born in October weighing 1.3 pounds, smaller than a man’s hand.

Despite her successful birth, Abi needed immediate surgery. She had necrotizing enterocolitis, a severe intestinal problem and the most common ailment requiring surgery in premature babies.

The only trouble was, to anyone’s knowledge, the surgery had never been attempted on a baby so small and so young. The youngest child previously operated on for necrotizing enterocolitis was 25-26 weeks’ gestation.

Doctors gave Abi a 1-in-10 chance of surviving the surgery. Without it, she had no chance.

“We only chose to operate because her chances of survival without surgery were so small,” Abi’s surgeon, Zahid Mukhtar, explained.

Abi’s parents agreed to the life-threatening surgery as a last hope. “Within a day or two, she would have been dead,” Louise said.

“It was so scary when it first happened,” the mother told the UK Standard. “We didn’t know what to expect. We prayed and hoped for the best.”

Dr. Mukhtar led a 10-member surgical team in what Abi’s parents called “the longest three hours of our lives.”

The doctors operating on Abi had to use specially modified tools because she was so tiny.

“It’s amazing work … because we have this team of people who are really passionate about children’s survival and pushing the boundaries of what is humanly possible,” the surgeon said.

Not only was the operation successful, but Abi continued to grow and thrive.

“She truly is our little miracle,” her parents beamed.

“How wonderful that doctors are working to push the boundaries to save very early premature babies’ lives this side of the womb,” Greater Cincinnati Right to Life executive director Paula Westwood told LifeSiteNews. “It’s such a contrast to those who insist on destroying children the same age on the other side of the womb.”

After four long months in the hospital, Abi was discharged last week and allowed to go home to her parents and big sister Tara (2).

“It’s just been amazing,” Abi’s proud father said. “She has overcome every hurdle she has faced.”

“All the signs suggest we should be optimistic about her long-term prognosis.” Dr. Mukhtar said.

Noting that “babies are aborted every day at 23 weeks,” Westwood concluded, “It should not have to be said that every child from earliest beginnings deserves protection by virtue of simply being human.”

“This little girl is a visible example of that humanity and the fight to live within each human soul.”

Dr. Mukhtar summarized his philosophy by quoting his mother: “My mother and grandmother taught me never to give up on a child.”

Editor’s note: This article originally appeared at LifeSite, and is reprinted here with permission.