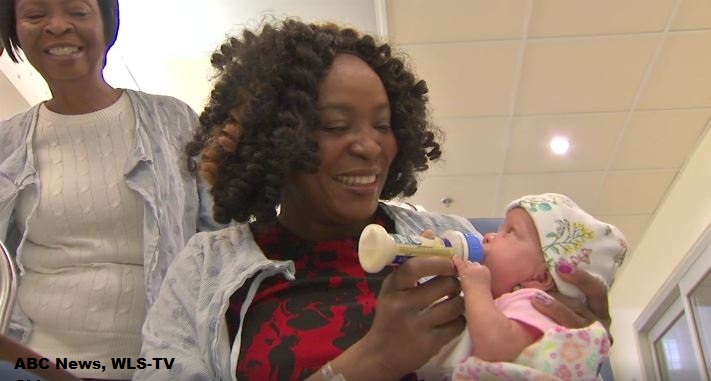 Baby Eirianna was born at the end of October 2016, at Chicago’s Mount Sinai Hospital. But Eirianna’s story is very different from that of countless other babies also born there: she was born at only 23 weeks’ gestation. Her mother, Enitan Martins, wasn’t due to give birth until January, but she had been diagnosed with pre-eclampsia and had been on bed rest in the hospital, trying to give her daughter more time. But doctors realized they couldn’t wait any longer, and Eirianna was soon born by C-section.

“He comes in one day and says, ‘We’re having the baby now. I’m calling your husband, we’re gonna do it,'” Martins recalled.

Eirianna was a micro-preemie, weighing only 13 ounces. It was a first for some of the people on her medical team, to have a baby so tiny and fragile. The average NICU stay there is only 21 days, but Eirianna was there for 140 days.

“She was the smallest baby I ever took care of here,” Amanda Kim, a NICU nurse, said. Eirianna was so delicate that her parents couldn’t even touch her for the first few weeks of her life.

“I thought I was prepared for it, but when I saw her I was shell-shocked,” Martins admitted.

Four months after her birth, Eirianna has finally gone home as the smallest patient to ever survive at Mount Sinai. There were times when it looked as if she might not make it, but she powered through, and on February 22, 2017, her parents were able to take her out of the hospital.

Viability is typically considered 24 weeks’ gestation, and it’s not uncommon for some medical professionals to withhold life-saving measures for babies born younger than that. But advances in medicine are changing that, and babies are able to survive prematurity more often and at younger ages.

A study last year from the Journal of the American Medical Association showed that two-thirds of babies born at 22 and 23 weeks would survive if they were given active medical care. In the study, one in four preemies this young were found to survive without any severe complications. One of the co-authors of the study argued that the marker for viability should now be lowered to 22 weeks.

“That’s what we think, but this is a pretty controversial area,” Dr. Edward Bell told the New York Times. “I guess we would say that these babies deserve a chance.”

Another doctor, not involved in the study, seemed to agree with Bell.

“It confirms that if you don’t do anything, these babies will not make it, and if you do something, some of them will make it,” said Dr. David Burchfield, the chief of neonatology at the University of Florida.

This information is relevant now more than ever, as more and more states ban late-term abortions. The abortion lobby fights these bans tooth and nail, but the reality is, abortion after 20 weeks takes the life of a preborn child who has a fairly decent chance of survival. Viability is only going to continue to move earlier through pregnancy as medicine advances, making late-term abortions medically unnecessary, as former abortionist Dr. Anthony Levatino explains in this video:

Regardless of the fact that many of these babies can survive, abortionists around the country continue to take their lives. Planned Parenthood, for example, has multiple facilities that will perform abortions up to 24 weeks.

Science is making it clear that late-term abortion is cruel, as the babies are able to feel pain. But pain or not, it’s always been an inhumane procedure, as all abortion is. It’s an atrocity that should not be tolerated any longer.