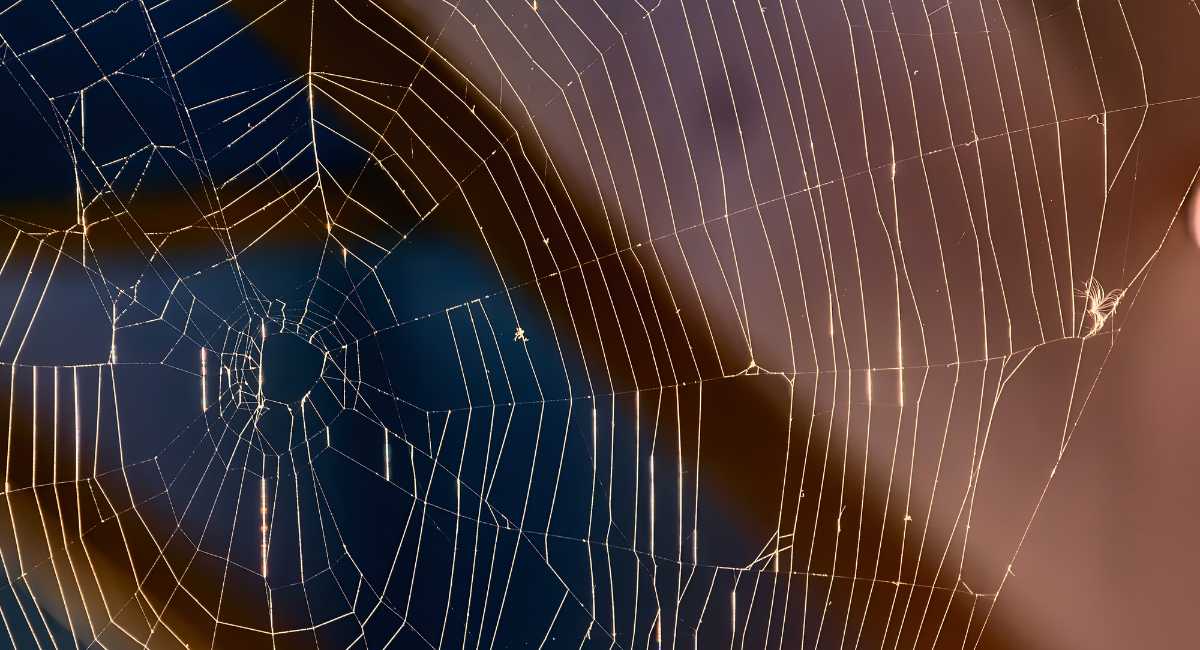 Such an arrangement appears to be a possible conflict of interest, which Investopedia notes “occurs when a company or person has a vested interest—such as money, status, knowledge, relationships, or reputation—which puts into question whether their actions, judgment, or decision-making can be unbiased.” In the cases noted above, funding appears to be funneled back and forth among abortion-friendly groups, researchers, and manufacturers — which all seek to expand abortion and all make their livelihoods from the expansion and advancement of abortion.

What is even more worrisome is that these clinical trials and studies — which are, it appears, less than impartial — are likely to have been the same trials and studies that the U.S. Food and Drug Administration (FDA) relied upon in making its decision to expand abortion pill dispensing via mail order and retail pharmacy.

Disturbingly, Live Action News previously noted that some abortion pill study authors have even been on the payroll of the abortion pill manufacturers themselves.

From the onset, Danco’s executives, company structure, and original investors have been shrouded in secrecy — with the exception of a select few.

In 2000, CNN wrote, “A report in the Sept. 5 edition of the Wall Street Journal cited company documents showing for-profit Danco and its non-profit partner, the Population Council, have received money to develop mifepristone from prominent investors such as Warren Buffett, George Soros and the late David Packard.”

The Population Council, a eugenics-based organization founded by John D. Rockefeller III, brought the abortion pill into the U.S. and later set up Danco Laboratories, LLC, as a sub-licensee of the Population Council. Shortly after establishing Danco to manufacture the pill, they set up a system through which it would also receive royalties from its sales.

Today, the Population Council is funded by the Gates, Buffett, and Packard Foundations, among many others — including the Ford, Hewlett, MacArthur, and Kellogg Foundations.

Many of these names are, no doubt, familiar — but rarely have most been openly associated with the advancement of abortion. Let’s take a look at just a few…

The Packard Foundation: In 1996, the David and Lucile Packard Foundation (a substantial donor to Planned Parenthood, the National Abortion Federation (NAF), and NARAL), invested $14.2 million into Danco. The image below comes directly from a Packard report.

In addition, Packard is now investing millions into the abortion pill’s generic manufacturer, GenBioPro, Inc., which claims to have captured a significant share of the abortion pill market. According to a previous Live Action News report, Packard invested approximately $2 million in 2015, $185K in 2016, $100K in 2017, $500K in 2018 and $1.5 million in 2019 — the year FDA approved GenBioPro’s generic status.

When the Washington Free Beacon recently asked Packard about its GenBioPro investment and whether it stands to make a profit if the company increases in value, the outlet was directed to an online statement detailing Packard’s investment program. This statement acknowledges that the Foundation “take[s] risks in pursuit of impact while seeking overall return of principal” so it “can recycle capital to maximize impacts over the long-term,” the Free Beacon wrote, adding, “The foundation declined to comment on its GenBioPro investment specifically.”

Warren Buffett’s fanaticism for abortion even led him to start a church that referred women for illegal abortions prior to Roe v. Wade. 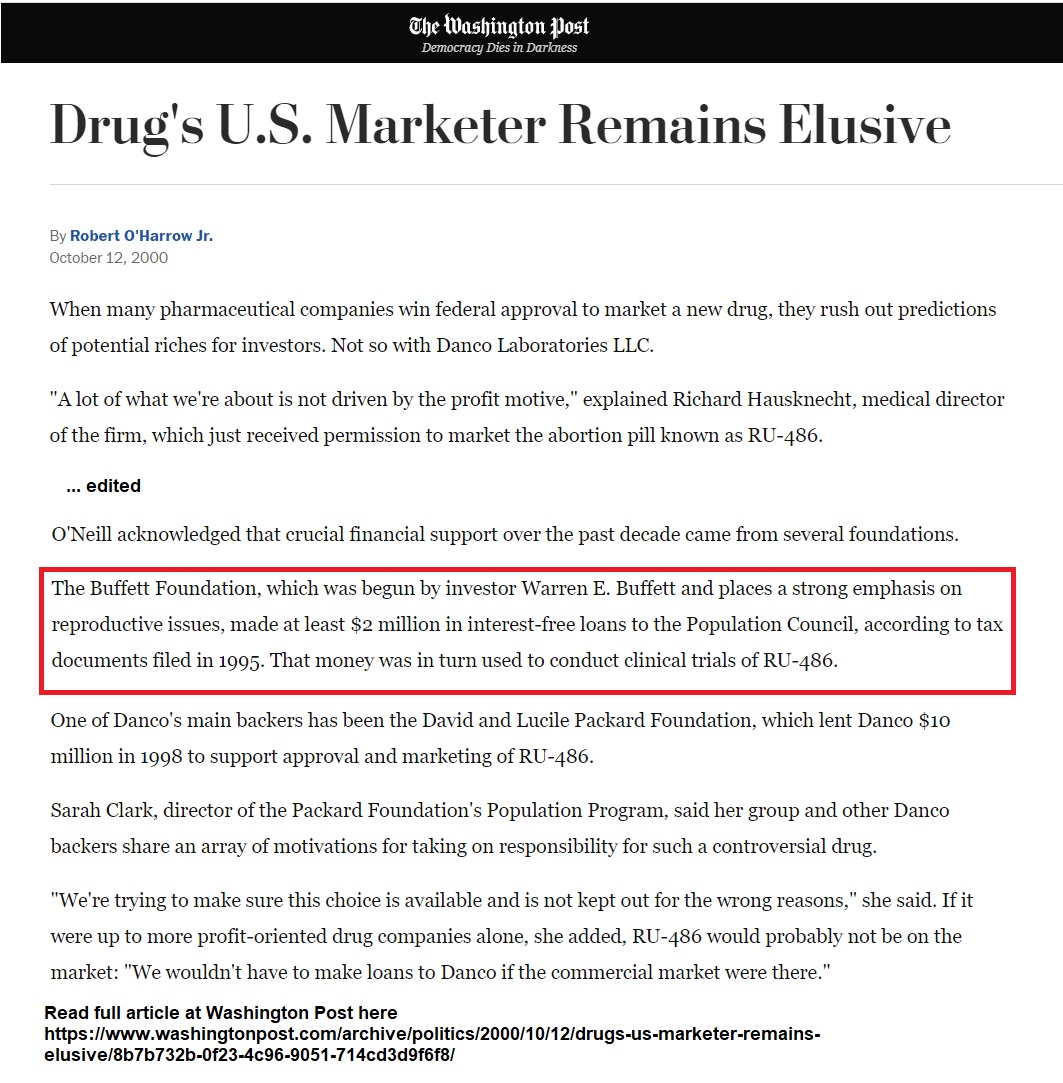 Packard and Buffett also funded Gynuity Health Projects, and the Buffett, Packard, and Soros Foundations fund the University of California (UC). These organizations are behind multiple abortion pill clinical trials as well as a number of studies expanding access to the abortion pill regimen. The Buffett and Packard Foundations then financed studies used to convince the public that abortion is safe — yet the media fails to point out this conflict of interest.

In 2015, Gynuity sponsored its ever-expanding TelAbortion clinical trials (referred to by Fast Company as a “workaround” to the FDA’s REMS) to dispense the abortion pill via mail order. The trials took place at various location sites including Planned Parenthood, Carafem, and Family Planning Associates of Maine (doing business as Maine Family Planning).

The Buffett, Gates, and Packard Foundations (more here) and Population Council all fund Gynuity. According to 990’s on file with ProPublica, the National Abortion Federation (NAF), MacArthur, and Hopewell Foundations also fund Gynuity.

While Gynuity conducted the trials, it received financial support from Ibis Reproductive Health, an organization that had for years been directly funded by Danco. After Live Action News exposed this financial conflict of interest, the funding connections were suddenly scrubbed from the Ibis website. Unsurprisingly given all of these connections, Ibis is also funded by both the Buffett and Packard Foundations and was previously funded by both the Population Council and Gynuity. 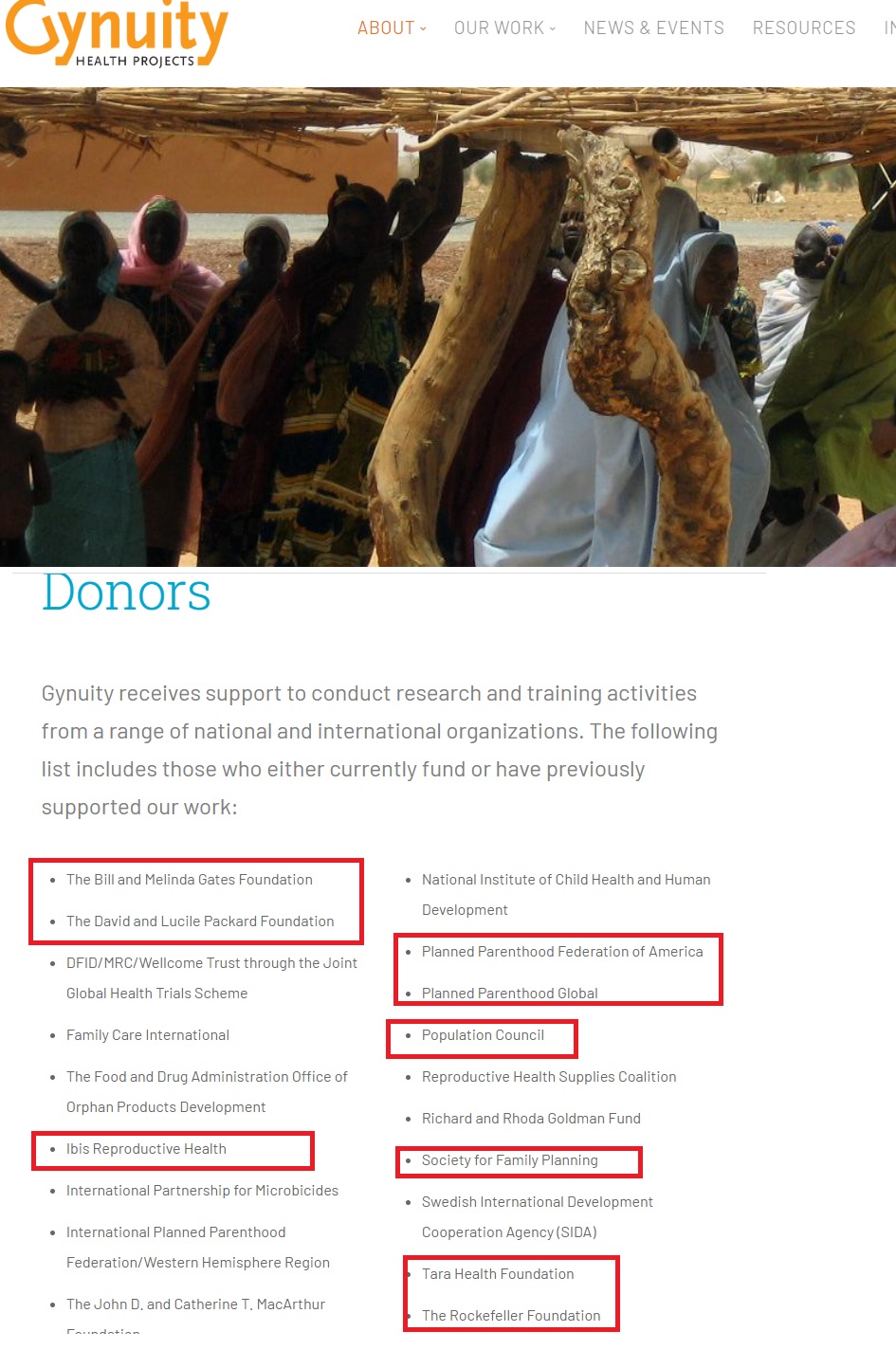 Today, Gynuity trials are underway at Planned Parenthood, to test drugs not under the REMS for potential use as abortion pills. In addition, Gynuity is conducting a trial for FDA approval of the abortion pill through 84 days/12 weeks (while the abortion industry surreptitiously prescribes the drug well into the second trimester and even into the third trimester.) 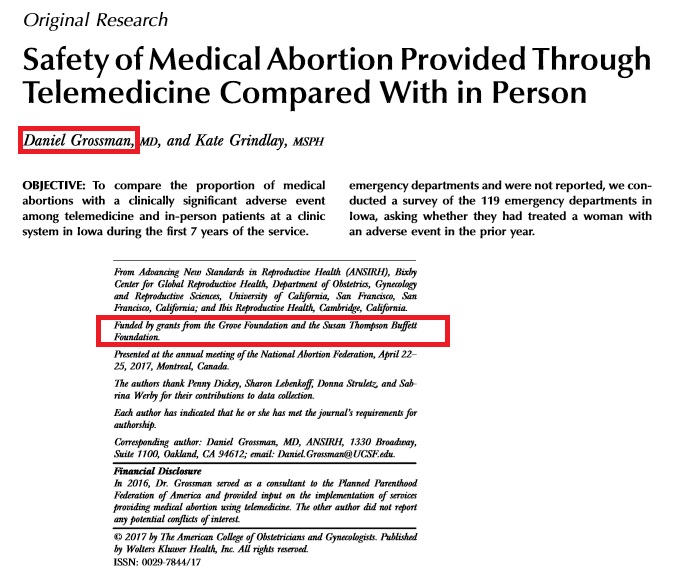 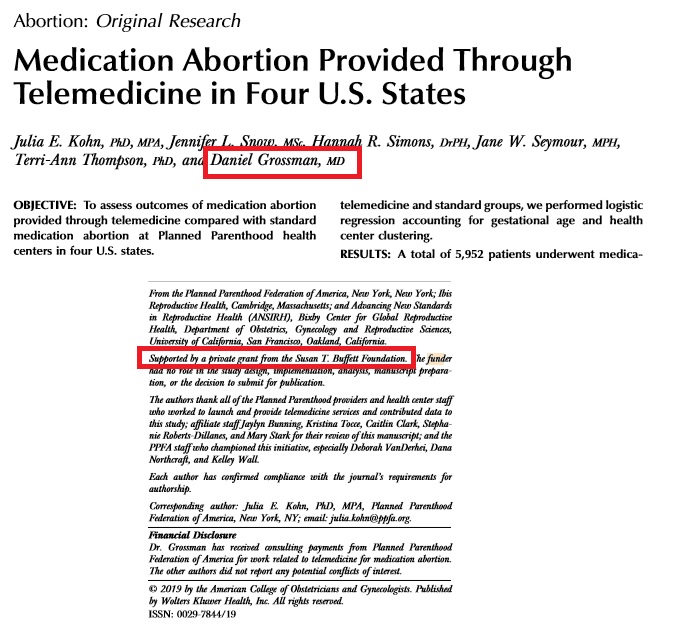 Grossman, an abortionist with multiple conflicts of interest regarding the abortion pill, is a director of Advancing New Standards in Reproductive Health (ANSIRH) — and despite authoring multiple abortion pill studies, he unethically suggested that emergency room physicians should not document abortion pill complications in a post-Roe environment. Grossman served as a consultant to Planned Parenthood, is Senior Director at Ibis Reproductive Health (which was directly funded by Danco when Grossman began to publish his trials), and formerly served on the boards of Whole Woman’s Health NAF, and NARAL.

ANSIRH previously published a report with Packard-funded Ibis Reproductive Health and Gynuity suggesting that “medication abortion could be even further demedicalized through pharmacy dispensing and expansion of telemedicine models—or even making it available over the counter (OTC)—which have the potential to expand access greatly.” ANSIRH also publishes workbooks on abortion training and is part of a “program within UCSF’s Bixby Center for Global Reproductive Health,” which trains abortion providers through its Ryan Residency Training Program. Bixby and ANSIRH are both funded by Packard. ANSIRH’s TEACH Curriculum was established in 2003 with financial help from the Packard Foundation, and the curriculum’s website also admits it “receives unrestricted educational grant funding from Danco, LLC,” and has for years.

This incestuous, tangled web of funding among these abortion industry power players is shocking, and were it more readily known, would likely erode public trust in the abortion industry’s repeated claims about the abortion pill’s safety. In reality, these powerful entities — which share a pro-abortion, pro-population control philosophy — also share a desire to profit from the abortion pill as they advance their harmful agenda.