There has been a lot of secrecy surrounding the abortion pill, used to end the lives of nearly four million preborn children  between 2000 and 2018, including its manufacturing locations. The eugenics-founded Population Council initially brought the abortion pill into the U.S. and set up the pill’s for-profit manufacturer, Danco Laboratories, LLC – and today Danco’s location and many of its funders continue to be cloaked in secrecy. This is unprecedented, and it endangers women and girls.

In the years leading up to the abortion pill’s FDA approval, multiple media outlets picked up on the abortion manufacturer’s secrecy. Initially, Danco itself was kept secret, and according to a 2000 Washington Post article, the FDA “took the unprecedented step of refusing to disclose the name or location of the manufacturer. In a separate article, the Washington Post wrote, “Secretive and obscure, Danco is one of the most enigmatic companies in the pharmaceutical industry… They say Danco intends to make a profit eventually.”

“In a strange twist, the FDA acceded to Danco’s request that the name of its manufacturer be kept secret — and even shielded the names of the FDA researchers who had overseen the pill’s approval,” reported the Orlando Sentinel. “Even FDA spokespeople — the public relations specialists who field reporters’ calls to the agency — are keeping their names confidential as a condition of being interviewed about the drug.”

I called Danco’s New York offices for weeks before anyone phoned me back. [Heather] O’Neill, a 28-year-old Harvard graduate [a former Population Council intern] who went on to the Kennedy School and whose real interest is women’s health policy, not running interference for jumpy investors, is the only public voice of Danco.

Most of the questions I ask her elicit nervous laughter and long pauses, followed by the most parsimonious of replies. She won’t reveal the names or the locations of the manufacturers or even whether they are start-ups for this purpose or established companies, and she says that Danco will try to maintain this secrecy throughout the manufacturing process.

That same year, the Wall Street Journal wrote, “It’s even hard to physically locate Danco. There are no signs in its building’s lobby or hallways pointing to the suite the company occupies. Phone Danco and the person who answers avoids mentioning [the company’s] name, instead asking, “How can I help you?… Danco’s chief executive officer… doesn’t talk to the press.”

In 2000, information leaked out about the last known manufacturing location of the abortion pill. CBS reported in 2000, “Officials in China confirmed… that the Shanghai-based Hua Lian Pharmaceutical Co. will make the raw compound for RU-486….” This pharmaceutical company was owned by the Chinese Communist Party.

The Los Angeles Times also confirmed the location, writing, “Danco refuses to release the names of its executives and investors. The company even persuaded the Food and Drug Administration to keep secret the location of the factory where the abortion drug will be produced, despite several published reports that it will be made in bulk at the state-owned Hua Lian Pharmaceutical Co. in Shanghai.”

“… [D]ocuments indicate that Danco expects to pay at least $293,363 through the end of this year to one of several Chinese manufacturing plants that currently produce RU-486,” the Wall Street Journal (WSJ) noted. 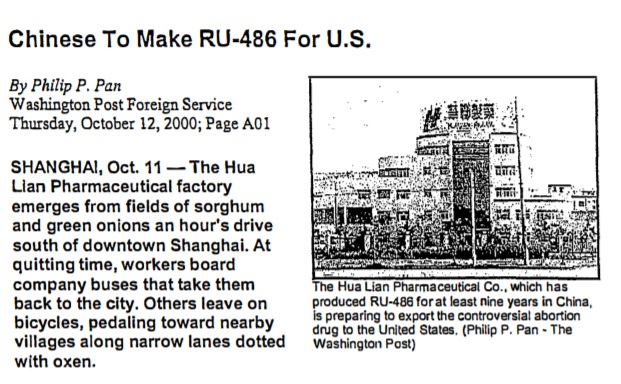 Though today, the mainstream media frequently ignores China’s human rights violations, in 2000, the WSJ pointed out, “RU-486 isn’t just another Chinese-made gadget for export, but an instrument in carrying out Beijing’s one-child policy. China denies it has forced abortions, but plenty of governments, nongovernmental organizations and Chinese defectors say otherwise.” The outlet added, “[P]roponents of RU-486 won’t be able to avoid the associations attached to the policies of the country in which it is manufactured, where young women… are forbidden any such choice.”

National Right to Life, which published detail reports about the approval process, noted that this new manufacturer, Hua Lian, had a poor record on drug safety:

The same firm, operating under a different name, is believed to have shipped contaminated capsules to the U.S. just a few years ago. In 1998, the California Health Department said there were ” truly alarming levels of contaminants” in nearly half of the traditional Chinese medicines. The department listed “Compositae Tegafuri Capsulae” manufactured by Shanghai Pharmaceutical Factory #12 (Hua Lian’s earlier designation) as one of the contaminated medications.

The FDA told staffers for the House Commerce Committee looking into the matter that the agency did not consider the firm’s past record relevant to the safety of RU486. Committee chair Rep. Thomas Bliley (R-Va.), told the FDA in a November 1, 2000, letter, “I disagree.” 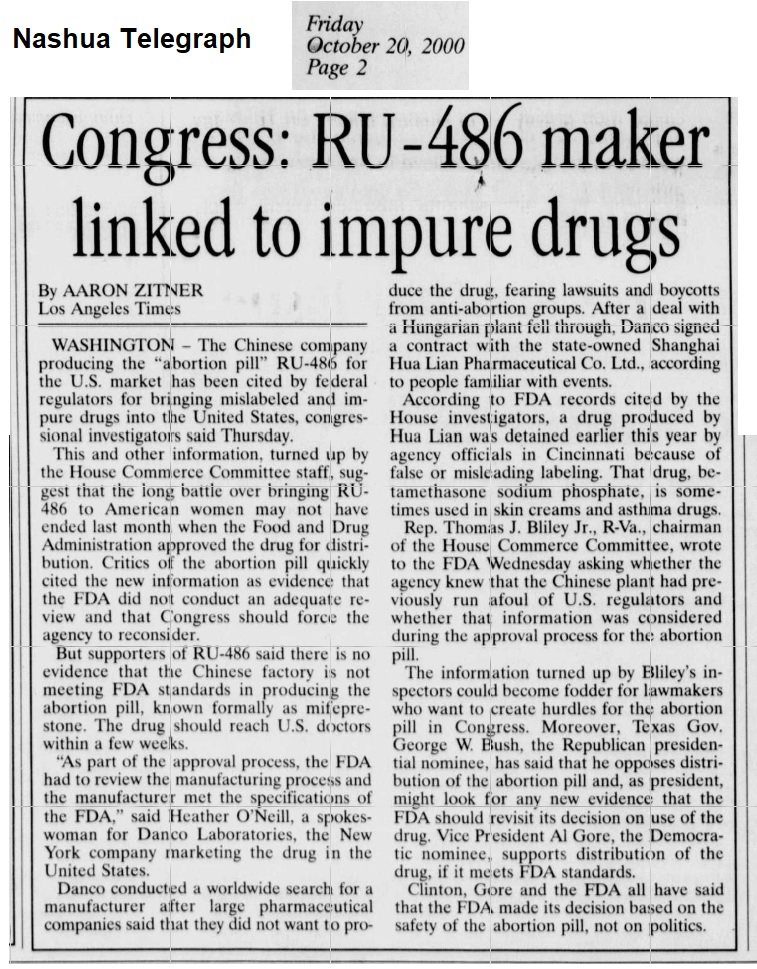 Abortion pill manufactured in China where drugs are not safe (Image: Nashua Telegraph 2000)

In 2008, Hua Lian distributed contaminated leukemia drugs that paralyzed at least 200 Chinese cancer patients, according to a report published in the New York Times. The news outlet noted that Hua Lian was “the sole supplier to the United States of the abortion pill, mifepristone, known as RU-486. It is made at a factory different from the one that produced the tainted cancer drugs, about an hour’s drive away,” adding that, “When told of Shanghai Hua Lian’s troubles, Dr. Sidney M. Wolfe, a leading consumer advocate and frequent F.D.A. critic, said American regulators ought to be concerned because of accusations that serious health risks had been covered up there. ‘Every one of these plants should be immediately inspected,’ he said.”

This alarming news even prompted abortion corporation Planned Parenthood to call on the FDA to “ensure the safety of drugs manufactured by Shanghai Pharmaceutical Group for the United States” specifically because of the abortion drug.

Today, Danco’s manufacturing locations remain elusive despite the fact that these dangerous drugs are now potentially being mailed to children as young as 10 in clinical trials.