The FDA has approved a generic version of the abortion pill Mifeprex, at a time when more deaths are being reported and the abortion industry is pushing for the dangerous abortion inducing chemicals to be dispensed online or by mail. According to a notice from the FDA, the generic version is approved for use as an abortifacient. This news comes just a day before the FDA updated its adverse effects reports through 2018, stating, “As of December 31, 2018, there were reports of 24 deaths of women associated with Mifeprex since the product was approved in September 2000, including two cases of ectopic pregnancy resulting in death; and several cases of severe systemic infection (also called sepsis), including some that were fatal…” The FDA’s 2017 report put the number of deaths at 22.

This means that in 2018 alone, two more women died from taking the abortion pill. And yet, now a generic version is going to be made available.

To date, the report documents nearly 4,200 reported adverse effects, including hospitalization and other serious complications.

On April 11, 2019, the FDA approved GenBioPro, Inc.’s abbreviated new drug application for a generic Mifeprex, which, when used with Misoprostol is approved as an abortion pill regimen. The FDA states (emphasis added), “This approval reflects FDA’s determination that GenBioPro’s product, Mifepristone Tablets, 200 mg, is therapeutically equivalent to Mifeprex and can be safely substituted for Mifeprex. Like Mifeprex, the approved generic product is indicated for the medical termination of intrauterine pregnancy through 70 days gestation….”

The FDA also states clearly that although they modified the Mifeprex application to include “mifepristone products,” this change in no way removes the FDA’s REMS (Risk Evaluation and Mitigation Strategy), “a safety strategy to manage a known or potential serious risk associated with a medicine and to enable patients to have continued access to such medicines by managing their safe use.”

Requiring that the generic be subject to FDA’s REMS is good news for now, because, as Live Action News has previously reported, the abortion lobby is attempting to expand access to the abortion pills via mail order or pharmacy by pushing “self-managed abortion,” described by Guttmacher as ending a pregnancy “without direct supervision by a health care provider.” To accomplish this, REMS, must be eliminated.

READ: What you should know about the dangerous ‘self-managed’ abortion pill push

Allowing a generic equivalent of Mifeprex basically means that the patent restrictions have run out. So, new drugs have a patent which is time limited… and in the case of Mifeprex, the patent was held by the Population Council. So, now that the patent has run out, generics are allowed. But this does not change the restrictions. REMS are still in place until FDA changes the restrictions. So, just to clarify, this does not mean that Mifeprex is OTC [over-the-counter]. It just changes how much quality control goes in to the pill manufacturing process and how much Danco can charge for the drug.

The move towards a generic drug is being hailed a victory by abortion advocates, specifically Dr. Daniel Grossman, who has deep ties to the “self-managed” abortion pill push. 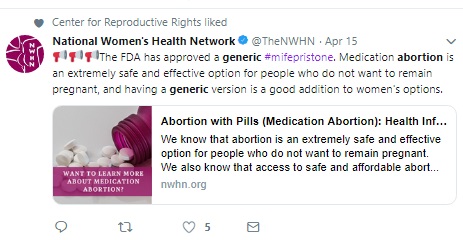 Under the Mifepristone REMS Program, the FDA states, “Mifeprex and the approved generic version of Mifeprex” may:

The original drug (Mifeprex) was approved in 2000 after being brought to the U.S. by the eugenics-founded Population Council, and was seeded by the Packard Foundation among other pro-abortion philanthropy groups. They then set up a highly secretive company named Danco to manufacturer the drug.

The generic version is produced by GenBioPro, Inc., which also appears to have the financial support of abortion collaborators. In fact, Packard gave GenBioPro, Inc. $185,000 in 2016 and 100,000 in 2017. According to the Nevada Secretary of State, a 2007 filing for the company was permanently revoked. A new filing in 2011 is active and shows a registered agent of CSC Services of Nevada, Inc. and the only officer listed is E. Masingill.

The FDA warns consumers they should not buy Mifeprex or GenBioPro, Inc.’s approved generic version of Mifeprex, Mifepristone Tablets, 200 mg., over the Internet because they will bypass important safeguards designed to protect patient health.

Editor’s Note 4/16/21: “The FDA has received reports of serious adverse events in women who took Mifeprex. As of December 31, 2018, there were reports of 24 deaths of women associated with Mifeprex since the product was approved in September 2000, including two cases of ectopic pregnancy resulting in death; and several cases of severe systemic infection (also called sepsis), including some that were fatal.

The adverse events cannot with certainty be causally attributed to mifepristone because of concurrent use of other drugs, other medical or surgical treatments, co-existing medical conditions, and information gaps about patient health status and clinical management of the patient. A summary report of adverse events that reflects data through December 31, 2018 is here.” https://www.fda.gov/drugs/postmarket-drug-safety-information-patients-and-providers/questions-and-answers-mifeprex