Planned Parenthood is being flooded with taxpayer dollars through the Federal Title X Family Planning Program days after receiving a $275 million donation from MacKenzie Scott, the ex-wife of Amazon founder Jeff Bezos.

The U.S. Department of Health and Human Services’ (HHS) release shows that out of the $256.6 million awarded by HHS in grant funding to 76 grantees, more than $14.5 million was given to Planned Parenthood in 12 states, with an additional $17.2 million going to a Maine abortion facility and a heavy advocate of abortion in Hawaii and California. In addition, President Biden’s 2023 budget seeks to increase spending to Title X from $286.479 million to $400 million.

Planned Parenthood presents itself as a health care organization, yet year after year, most of its legitimate health services decline while abortions increase. Despite this fact, in January of 2022, HHS announced the agency was awarding over $1.9 million to three Planned Parenthood affiliates and nearly $1.7 million to other organizations that promote or commit abortions. Just a few months later, the most recent HHS announcement indicates eight Planned Parenthood affiliates will receive $14,568,770 in taxpayer dollars to go to facilities in 12 states.

Live Action News recently documented that a lawsuit filed against PPSNE alleges a PPSNE midwife misdiagnosed a pregnancy that resulted in the death of a 22-week-old baby boy after telling the pregnant woman that she had miscarried at six weeks. Still another alleges PPSNE failed to notice a client was 14 weeks pregnant before inserting an IUD. A third separate lawsuit alleges that a PPSNE abortionists left a woman permanently injured.

Planned Parenthood of Northern New England (PPNNE) was granted $502,500 in New Hampshire. In 2018, PPNNE committed abortions on 3,554 clients while according to their 2019 annual report, abortion at PPNNE is six percent of the services the affiliate provides.

In addition, HHS granted Essential Access Health in California, whose network also includes Planned Parenthood, $13,200,000. EAH is a California-based organization that openly works to expand access to abortion. EAH states online that it is not only a member of Gov. Gavin Newsom’s California Future of Abortion Council, but also a “lead trainer and convener of campus health center partners and stakeholders” to support implementation of the state’s SB24 legislation, which forced California colleges to provide abortion access on campus. 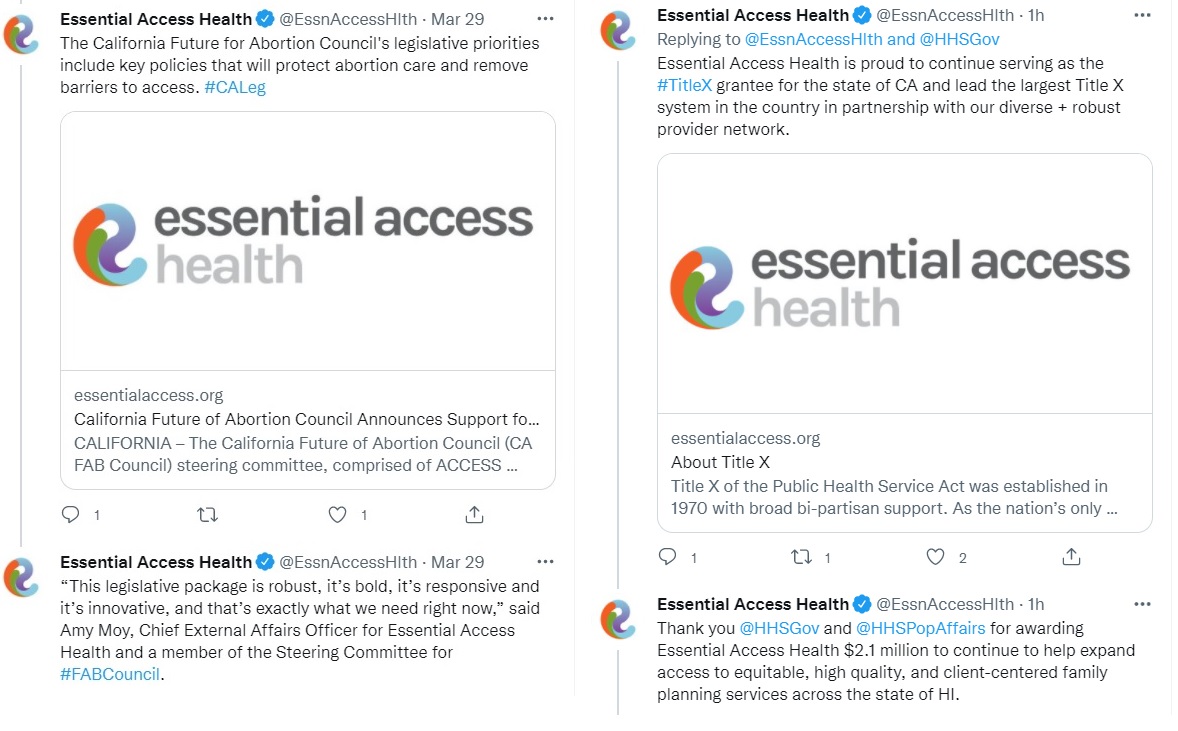 In January, HHS granted $157,500 to the Family Planning Association of Maine, Inc, which does business as Maine Family Planning and commits abortion up to 14 weeks of pregnancy. Maine FP has been part of the Gynuity-sponsored TelAbortion clinical trial, offering the abortion pill to children as young as 10. The latest HHS announcement grants this abortion facility, which also lists Planned Parenthood as a sub-recipient, an additional $1,925,000 in taxpayer dollars.

Live Action News has previously documented multiple abuses by Planned Parenthood, a top Title X recipient funded in past years to the tune of $60 million dollars annually. These abuses include racism and discrimination, a failure to comply with mandatory reporting of child sexual abuse, a failure to protect patient confidentiality, and many others.