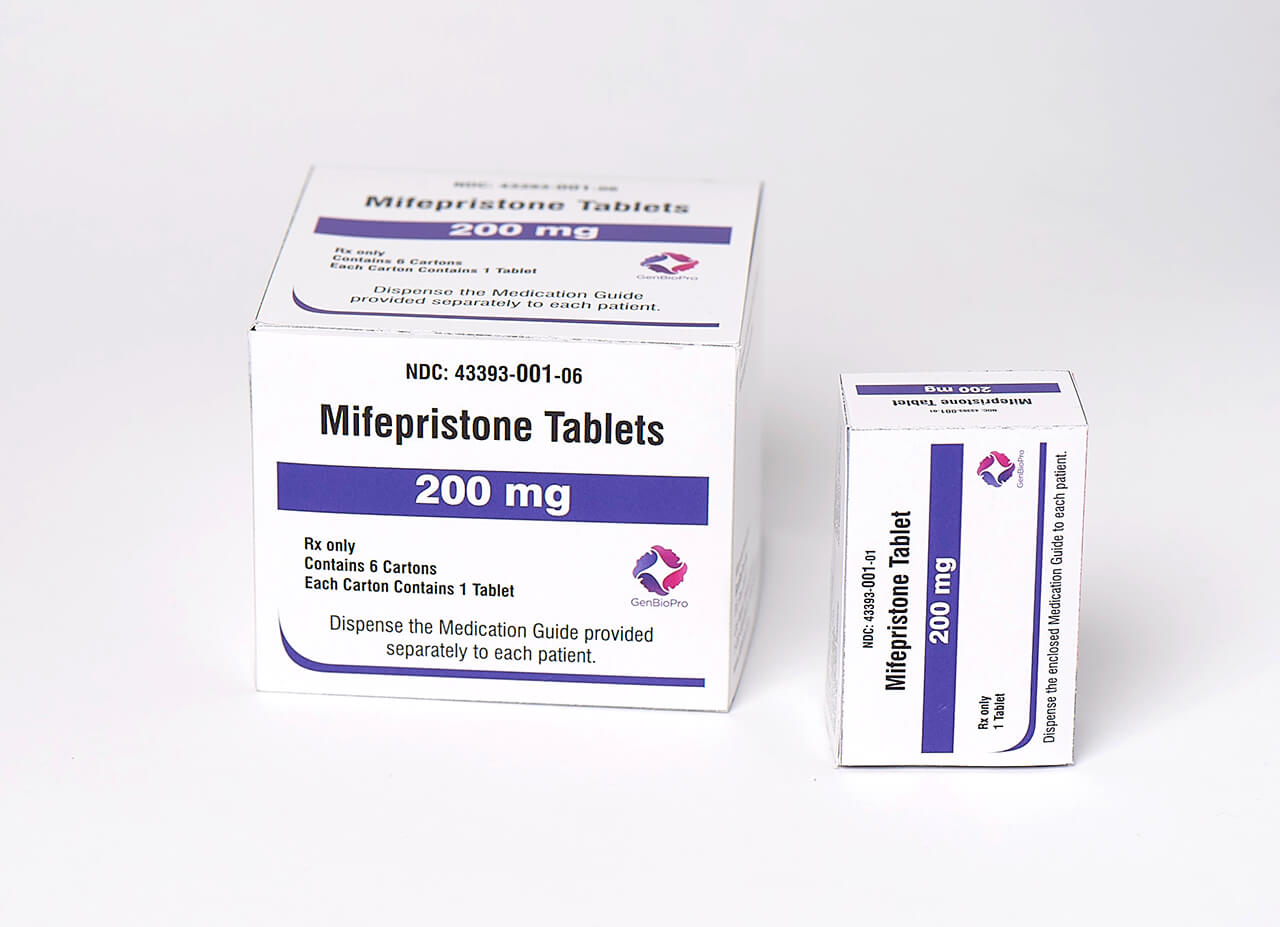 The generic manufacturer of the abortion pill — GenBioPro — claims to have captured a significant share of the nationwide market for mifepristone, according to a letter submitted to a U.S. District Court. The letter, submitted last year in GenBioPro, Inc. v. Dobbs, indicates that GenBioPro is shipping its mifepristone abortion pill tablets to providers in 45 states, and is partnering with Planned Parenthood “to provide mifepristone to Planned Parenthood Southeast’s clinics” in Alabama as well as Georgia.

The April 2021 letter written by Latham & Watkins, LLP states in part, “GenBioPro sells and ships its mifepristone tablets to providers in 45 states and the District of Columbia. GenBioPro does not currently sell mifepristone in Mississippi, Louisiana, Nebraska, Oklahoma, or Wyoming. Since GenBioPro received FDA-approval in April 2019 to market and sell mifepristone, GenBioPro has captured a significant share of the nationwide market for mifepristone,” the letter states. 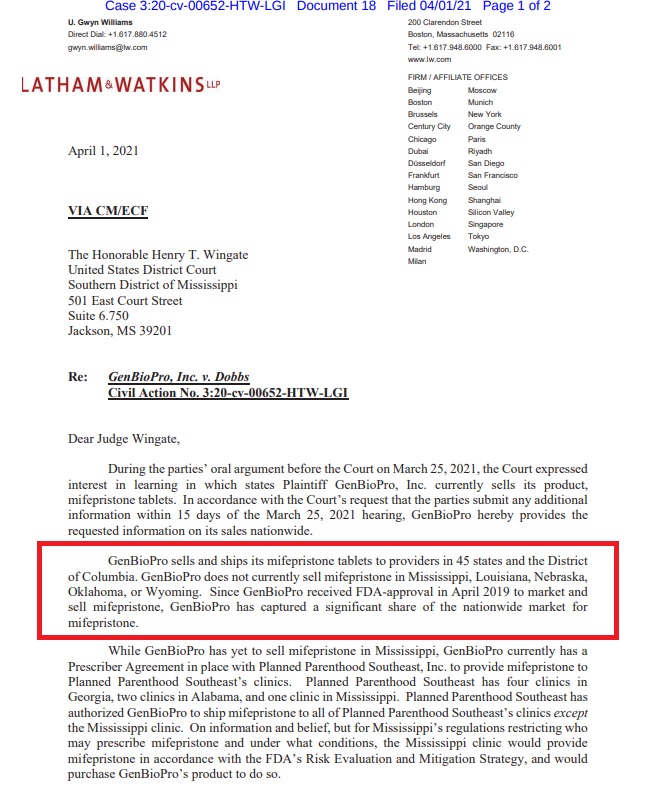 In 1994, with the encouragement of the Clinton administration, French pharmaceutical manufacturer Roussel-Uclaf assigned the U.S. rights of marketing and distribution of the abortion pill, known then as RU-486, to the eugenics-founded Population Council. The right to distribute the drugs was later handed over to Danco Laboratories, a sub-licensee of the Population Council and the manufacturer responsible for the production of the branded version, Mifeprex, after approval by the Food and Drug Administration (FDA) in 2000.

The FDA later approved GenBioPro, Inc.’s abbreviated new drug application for a generic Mifeprex on April 11, 2019, which, when used with misoprostol, is approved as an abortion pill regimen. The FDA states (emphasis added), “This approval reflects FDA’s determination that GenBioPro’s product, Mifepristone Tablets, 200 mg, is therapeutically equivalent to Mifeprex and can be safely substituted for Mifeprex. Like Mifeprex, the approved generic product is indicated for the medical termination of intrauterine pregnancy through 70 days gestation….”

Just like the originally approved and highly secretive abortion pill manufacturer Danco Laboratories was seeded with $14.2 million in investment dollars from the pro-abortion David and Lucile Packard Foundation, GenBioPro has also been seeded with funding from this abortion philanthropy group. According to a recent IRS document (below) obtained by Live Action News, the Packard Foundation has invested millions in GenBioPro:

GenBioPro is also listed under Packard’s “Other Asset Schedule” for 2019 and 2018. In addition to Packard, the San Francisco-based Parsemus Foundation has been granting GenBioPro thousands in loan dollars ($275K in 2018 and $320K in 2017) for as they put it “operations related to Family Planning.” Parsemus Foundation was founded by Elaine Lissner in 2005 “to support further research on male contraceptives,” the foundation’s website states.

GenBioPro is located in Las Vegas, Nevada. Dun and Bradstreet puts the location of the company inside commercial office suites located at 3651 Lindell Rd (Ste D1041) in Las Vegas. A separate label for misoprostol, the second drug in the abortion pill regimen, published at Daily Med, confirms that address.

According to the Nevada Secretary of State, a 2007 filing for the company was permanently revoked. A new filing in 2011 is active and shows a registered agent of CSC Services of Nevada, Inc. and the only officer listed is E. Masingill. Later filings list T. Leonard as Secretary and Director with S. Rizzo as Treasurer. The CEO of the generic abortion pill organization is Edward Jacobs, according to D&B, and Mary Fjerstad is listed as GenBioPro’s Senior Director of Medical Affairs.

GenBioPro president Evan Masingill was also one of the first board members to join Desert Star Institute for Family Planning (DSIFFP) in 2017, which provides “abortion training through the Next Generation of Abortion Providers Program (NGAPP).” DSIFFP was founded by abortionist DeShawn Taylor, founder and owner of Desert Star Family Planning clinic in Arizona and a senior medical director and consultant for GenBioPro. Taylor is one of the abortionists recorded in undercover video footage by the Center for Medical Progress, where she admits to committing abortions “up to 24 weeks.” She recently claimed in a court brief filed in the Dobbs v. Jackson Women’s Health Organization case heard before the U.S. Supreme Court that “abortion saves lives.”

According to an import report published at the FDA website, it appears that at one time GenBioPro received mifepristone tablets from Sun Pharmaceuticals Industries, LTD. The bill of lading import record shows the abortion drugs were shipped from Sun Pharmaceuticals’ Mumbai location after departing from a port in Nhava Sheva, India. The drugs were shipped to GenBioPro’s Nevada office at 3651 Lindell Rd, STE D1041 in Las Vegas after landing at a port in the New York/Newark Area of Newark, New Jersey.

According to its website, “Sun Pharmaceutical Industries Ltd. (Sun Pharma) is the fourth largest specialty generic pharmaceutical company in the world with global revenues of over US$ 4.5 billion.” The website mncritique.com, claims that Sun Pharmaceutical was “established in 1983 by Dilip Shanghvi and headquartered in Mumbai.”

“Sun Pharma is an international, integrated, specialty pharmaceutical company. It manufactures and markets a large basket of pharmaceutical formulations as branded generics as well as generics in India, the US and several other markets across the world,” the mncritique.com added.

While Sun Pharma manufacturers abortion drugs for a number of countries, it also manufactures the UK version of the abortion pill called “Medabon – Combipack” under the subsidiary Ranbaxy UK. In an unrelated matter in 2013, Ranbaxy USA pleaded guilty to felony charges relating to the manufacture and distribution of certain adulterated drugs made at two of Ranbaxy’s manufacturing facilities in India and knowingly making material false statements to the FDA. According to Reuters, Sun Pharma aquired Ranbaxy in 2014 but the pharmaceutical company’s website states they completed the merger in March of 2015.

Last year, the Biden FDA weakened important safety regulations (REMS) on the abortion pill by removing the in-person requirement for women to access the drugs and permanately allowing the deadly chemical abortion pills to be shipped by mail.