Live Action News recently uncovered the fact that one original investor in the abortion pill’s manufacturer is also now financially supporting a company producing a generic version of the abortion pill — all while pushing for the expansion of abortion.

Abortion pill manufacturer DANCO Laboratories, a highly secretive company, was started with funding from several abortion philanthropy groups, including the David and Lucile Packard Foundation, which has invested well over $14.2 million in the manufacturer since at least the year 2000. That was the year that Mifeprex was approved and brought to the U.S. by the eugenics-founded Population Council. It has now come to light that the Packard Foundation has also been investing millions in GenBioPro, a company producing a generic version of the abortion pill — approximately $2 million in 2015, according to a recent IRS document (below) as well as hundreds of thousands more in the past few years: 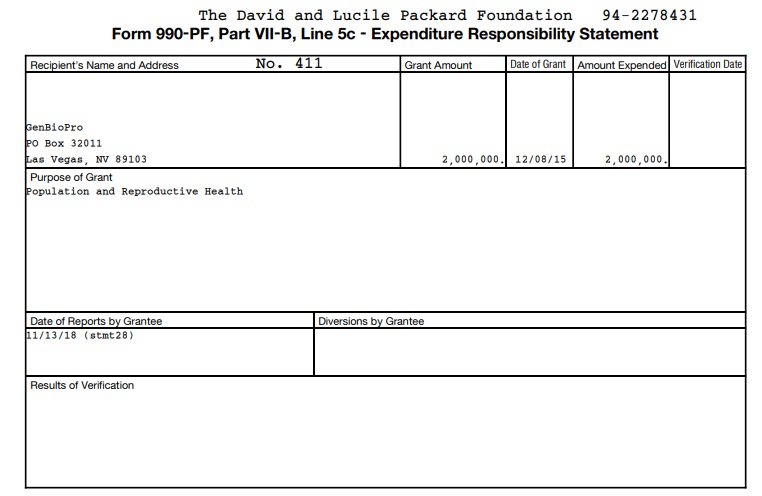 In April 2019, the FDA approved GenBioPro, Inc.’s abbreviated new drug application for a generic Mifeprex (which, when used with Misoprostol, is approved as an abortion pill regimen). The FDA stated (emphasis added), “This approval reflects FDA’s determination that GenBioPro’s product, Mifepristone Tablets, 200 mg, is therapeutically equivalent to Mifeprex and can be safely substituted for Mifeprex. Like Mifeprex, the approved generic product is indicated for the medical termination of intrauterine pregnancy through 70 days gestation….”

Packard would go on to fund Gynuity Health Projects, which is currently conducting abortion pill clinical trials, as well as a number of studies, to further increase access to the pills. Gynuity — which is also funded by Ibis Reproductive Health (see 2017 990 report), an organization directly funded by DANCO Laboratories — even recruited children and adult women from outside the U.S. for an experimental abortion pill trial for late-term abortions. Packard also funds studies (published in Journal Contraception) which claim that self-managed abortion is safe and that the FDA’s pill safety protocols are unnecessary. The clear conflict of interest is not noted in those studies. The FDA’s REMS (Risk Evaluation and Mitigation Strategy), is “a safety strategy to manage a known or potential serious risk associated with a medicine and to enable patients to have continued access to such medicines by managing their safe use.” But the media continues to turn a blind eye to this blatant financial conflict.

GenBioPro’s “about us” page states, “GenBioPro is helping to advance medical research to improve women’s health. We are committed to eliminating barriers and to supporting the community of providers, patients, and advocates working to ensure universal access to reproductive health care.” The website marketing refers to medication abortion as “common”  and refers interested parties to visit “health care providers who have enrolled in the GenBioPro Provider Program,” such as Planned Parenthood, the National Abortion Federation and others.

According to the FDA, “The estimated number of women who have used mifepristone in the U.S. for the medical termination of pregnancy through the end of December 2018 is approximately 3.7 million women….” GenBioPro’s generic Mifeprex online pamphlet indicates that, “Every year in the United States, more than 200,000 women manage their unwanted pregnancy through medical abortion.” The company then makes clear that, “2-7%—will need a follow-up surgical procedure to end their pregnancy or to stop too much bleeding” (emphasis added). Using the 200,000 number, this would mean that 4,000 to 14,000 abortion pill patients run the risk of needing a second more invasive surgical abortion. However, more accurate Guttmacher Institute numbers indicate that in 2017, there were 339,640 medication abortions out of 862,320 total reported — therefore, abortion pill failure rates could actually be as high as 7,000 to 24,000 annually.

The abortion pill currently accounts for 40 percent of all reported abortions in the United states. According to the FDA, “The estimated number of women who have used mifepristone [not the generic version] in the U.S. for the medical termination of pregnancy through the end of December 2018 is approximately 3.7 million women….”

According to the Charlotte Lozier Institute, “Taking Mifeprex and misoprostol results in four times as many complications as surgical abortion. Around one in twenty women will require surgery to complete the abortion or will end up in the emergency room – not to mention the potential for emotional trauma, when one’s own home becomes the place of one’s abortion.”