A lawsuit filed against Planned Parenthood accuses the organization of miscalculating a woman’s pregnancy so egregiously that she painfully delivered a “fully formed” 30 to 36-week baby boy into a toilet.

Court documents obtained by Live Action News revealed that the woman requested to remain anonymous, referring to herself as “Jane Doe.” In her court filing, she accused Planned Parenthood and the other defendants of conducting an “illegal abortion” on her while she was a “teenaged college student” at the age of 18. She called the ordeal “extremely disturbing.”

The lawsuit, originally filed January 20, 2021 in the New York State Kings County Supreme Court, shows no further disposition and appears (according to Trellis) to have been sealed.

According to the court document, on May 4, 2020, Jane Doe “obtained abortion information from Defendants via a fifteen minute, two second telehealth conference” without any physical exam. As a result, when Jane Doe advised Planned Parenthood that her last menstrual period was on March 23, 2020, they determined she was six weeks pregnant, before advising her that she could obtain abortion pills at PP’s Spring Valley Center, and, according to the lawsuit, Jane Doe “was not asked any further questions about the pregnancy, nor did she sign any consent forms.”

The lawsuit further alleges that Planned Parenthood “failed to perform any type of ultrasound or other scan on Plaintiff while she was at the Spring Valley Center to accurately confirm the gestational age of the fetus.” The lawsuit also contends that after Dr. Shah prescribed the abortion pill regimen to Jane Doe, she “began taking the medication on May 4, 2020 to proceed with the abortion of what she believed was a six-week old fetus.”

The abortion industry is maximizing profits with its self-initiated “no-test” abortion pill protocol, which fails to confirm the gestational age of the baby or rule out dangerous ectopic pregnancies. In addition, a failure to review the procedure and get signed agreements with the abortion client appears to be a violation of the FDA’s REMS safety system which requires a patient agreement be reviewed and signed by the abortion client.

Abortion patient delivers near full-term baby into a toilet

What happened after Jane Doe took the prescribed Planned Parenthood abortion pills was nothing short of horrific. According to the lawsuit, after consuming the pills, she delivered a fully formed baby boy into a toilet.

Plaintiff began her regimen of Mifeprex and misoprostol on May 4, 2020.

Plaintiff went into full labor in the early morning hours of May 5, 2020.

Plaintiff experienced extreme and painful accelerated changes to her body, including a vaginal laceration or tear, as the delivery progressed.

At approximately 3:00 am, while sitting on the toilet, Plaintiff gave birth to a fully formed, stillborn baby boy named J.T.

Plaintiff was shocked and traumatized when she saw the lifeless, fully-formed baby in the toilet covered in mucous, blood, and the placenta. 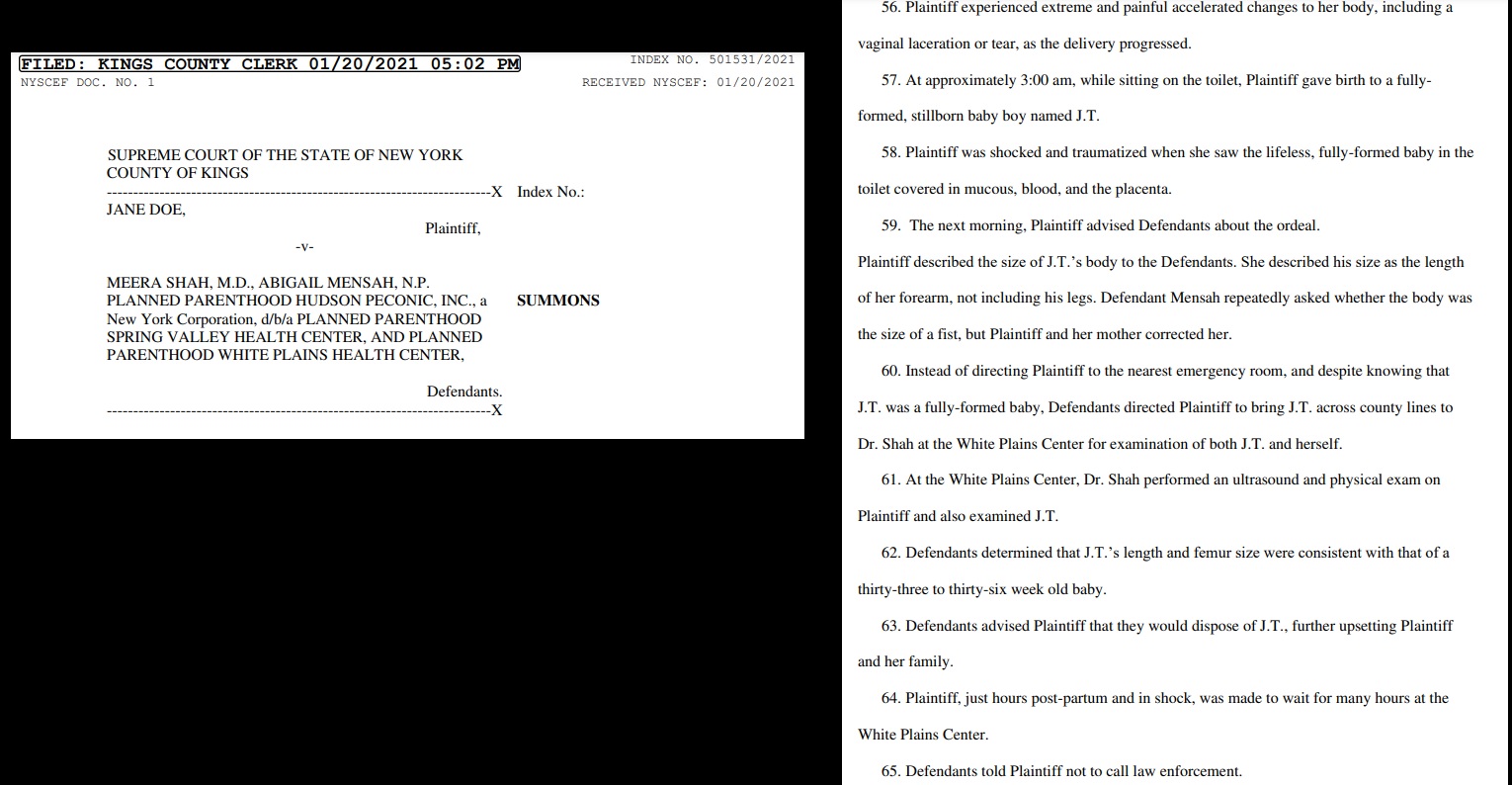 “The next morning,” the lawsuit states that Jane Doe advised Planned Parenthood what took place. She allegedly described to Planned Parenthood “the size of J.T.’s body… as the length of her forearm, not including his legs,” the document claims. Nurse Mensah then allegedly “repeatedly asked whether the body was the size of a fist, but Plaintiff and her mother corrected her,” the lawsuit states.

Dispose of the evidence and don’t call law enforcement

Jane Doe also alleges that after Planned Parenthood saw her lifeless baby boy, staff sought to “dispose of J.T. and told her not to call law enforcement.”

The complaint also alleges, “Instead of directing Plaintiff to the nearest emergency room, and despite knowing that J.T. was a fully-formed baby, Defendants directed Plaintiff to bring J.T. across county lines to Dr. Shah at the White Plains Center for examination of both J.T. and herself.”

The lawsuit then claims that after examining Jane Doe and her dead baby, Planned Parenthood determined the baby was 33-36 weeks old. “At the White Plains Center, Dr. Shah performed an ultrasound and physical exam on Plaintiff and also examined J.T. Defendants determined that J.T.’s length and femur size were consistent with that of a thirty-three to thirty-six-week-old baby,” the complaint states.

“Defendants advised Plaintiff that they would dispose of J.T., further upsetting Plaintiff and her family. Plaintiff, just hours post-partum and in shock, was made to wait for many hours at the White Plains Center. Defendants told Plaintiff not to call law enforcement,” reads the lawsuit.

According to Jane Doe, she refused to allow Planned Parenthood to dispose of her dead baby, and “a family member contacted law enforcement authorities for assistance,” the court document claims. It also alleged that Planned Parenthood made “misleading statements to law enforcement, including the indisputably untrue statement that Plaintiff was ‘examined’ and that Plaintiff decided on her own to bring J.T. across county lines.”

The aborted baby was transferred to the Westchester County Morgue, the lawsuit states, where on May 7, 2020, an autopsy was performed and it found that the “cause of J.T.’s death was determined to be a ‘medically induced termination of pregnancy of a 30-week fetus.’” Jane Doe alleged in her complaint that she was traumatized by her baby’s death.

“As a result of Plaintiff’s ordeal, she has endured significant stress, trauma, emotional anguish, physical pain, including laceration and an accelerated labor and delivery unaided by medication, lactation, soreness, and bleeding,” the lawsuit also claimed.

Similar scenario due to incorrect dating

This case is similar to a separate lawsuit filed that same year against Planned Parenthood of Southern New England, which alleged that the assessment of Planned Parenthood’s certified nurse midwife (CNM) Gannon Ward was so egregiously incorrect that she misdated the late pregnancy of Plaintiff Christin Lafo at just six weeks and three days before selling her an abortion pill. Lafo gave birth two days later to a 22-week stillborn baby boy whom she named Kyle Shawn Brady — and he, too, was delivered into a toilet.

The abortion industry has been experimenting for some time with the abortion pill well into the second trimester and against the FDA’s approved gestational limit. Currently, Gynuity Health Projects (GHP) is even utilizing Planned Parenthood facilities to test the abortion pill through 84 days/12 weeks, much later than the approved 70 day/10 weeks by the FDA. There, GHP is recruiting participants 11 years old and up.