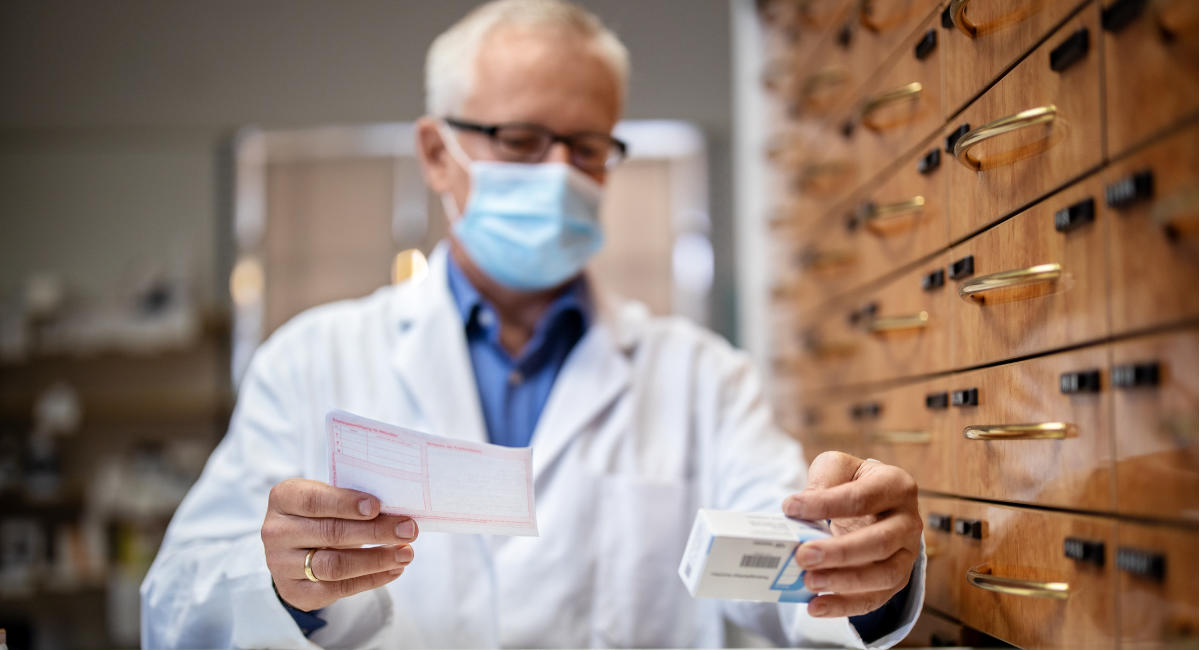 A study which purports to claim that most pharmacists “support” dispensing the abortion pill mifepristone and are “comfortable doing so” was conducted by pro-abortion researchers at study sites known for close associations to abortion. If this bias weren’t concerning enough, another concern is that study researchers based their results on only a small percentage of pharmacists who participated in the training.

Here are some more problems with this study:

1. Study’s sponsor deeply tied to and invested in abortion

Daniel Grossman, an abortionist and recent National Abortion Federation (NAF) board member who served as a consultant to Planned Parenthood Federation of America and the Center for Reproductive Rights (as well as leadership in other pro-abortion groups), was the sponsor for the study, “Medication for Pharmacy Dispensing.”

In June of 2021, Grossman and his colleagues (three of whom were consultants for Danco, Inc. — the manufacturer of Mifeprex — and the generic manufacturer GenBioPro), published data from the survey on “pharmacists’ knowledge, perceptions, and experiences dispensing mifepristone” from six clinical sites in California and in Washington state.

As Live Action News previously reported, those results revealed a lack of understanding among pharmacists about risks associated with the abortion drug. The report showed that barely half of pharmacists (51%) understood the percentage of patients requiring blood transfusions, 53% understood the risks of taking mifepristone, 53% understood minor consent laws for abortion. Just one-third (30%) understood adverse effects such as fever and chills.

A second report, “‘No Big Deal’: A Qualitative Study of Pharmacists’ Perspectives on Dispensing Mifepristone for Medication Abortion,” utilizing the same study, was published in July of 2022. It concluded that “most pharmacists supported dispensing mifepristone.” In this study, authors Sally Rafie and Karen Meckstroth also admitted conflicts of interest. As Live Action News previously documented, both have known financial ties to either Danco or GenBioPro.

2. Study sites pre-selected based on abortion views, and researchers all paid by abortion industry

The study “recruited six pharmacy sites for the study based on their affiliation with and proximity to clinical study sites providing medication abortion. The study sites were located in urban centers in California and Washington State,” the authors claimed, adding, “Pharmacists who participated in the interviews represented five of the six study pharmacies.”

These “study sites” are hardly representative of average pharmacies. “Our sample was limited to self-selected pharmacists from clinic-affiliated and independent community pharmacies in states with permissive abortion policies,” the authors claimed. In fact, three of the six originally listed sites were University of California (UC)-connected and one was a Planned Parenthood. The University of California-San Francisco trains abortionists and is heavily funded by the (Warren) Buffett Foundation, a large investor in Danco Laboratories.

Grossman’s study protocol reveals that principle investigators (PI) at study sites were also closely aligned with abortion (see image below). PIs Karen Meckstroth and Mitchell Creinin are on the payroll of Danco. Dr. Tina Raine-Bennett served on the National Medical Board of Planned Parenthood Federation of America and is a Board of Directors and the Treasurer of the Society of Family Planning and Society of Family Planning Research Fund. Dr. Erin Berry, the Washington medical director for Planned Parenthood of the Great Northwest and the Hawaiian Islands, believes abortion is a fundamental right. 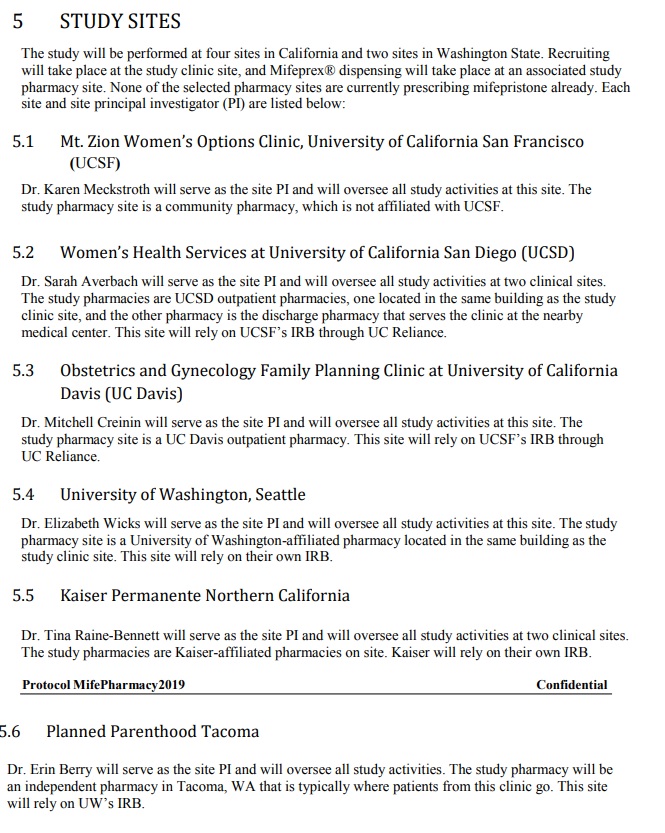 “Overall, at both baseline and follow-up, pharmacists expressed support for dispensing mifepristone, with many of them citing increased access to the medication as their main reason for support,” the study claimed.

3. Majority of pharmacists who participated in training not questioned on follow-up

Let’s do the math.

So, out of 72 invited and 56 who participated in the training, just 13 of those surveyed in follow-up actually dispensed the abortion drug.

While the study was obviously bent toward expanding abortion, it did acknowledge hesitancy among some pharmacists to dispense abortion-inducing drugs like mifepristone.

Out of the small number (15) of pharmacists that were interviewed at follow-up and (13) who actually dispensed the drug, the authors claimed that few expressed “challenges dispensing mifepristone.” Still, some expressed concerns. “Their main concern was perceived discomfort that other pharmacists and pharmacy staff may experience, particularly in conservative areas or small pharmacies where pharmacists’ refusal to dispense mifepristone could impede abortion access,” the authors wrote.

“Only one pharmacist we interviewed at baseline planned to decline to dispense mifepristone, for ethical reasons. They also felt the pharmacy may not be an appropriate place to counsel patients who have ‘second thoughts’ about having a medication abortion or who have ’emotional outbursts.’ This pharmacist, however, separated their personal decision not to dispense from the potential benefits on abortion access,” the authors wrote.

“Some technicians and pharmacists refused to dispense the medication, so we had to have conversations with who was willing to discuss it [with the patient] and who was willing to fill [the prescription] and type it, and then get it to me so that I could verify it,” one participant told authors.

The study stated, “Although all the follow-up interviewees said they felt comfortable dispensing mifepristone, some mentioned other pharmacists who felt less comfortable or confident in dispensing the new medication. This theme came up both at baseline as pharmacists were anticipating dispensing and at follow-up after their pharmacy had implemented the practice.”

The authors added, “Four interviewees from three pharmacy sites mentioned witnessing at least one fellow pharmacist who was uncomfortable with dispensing the medication for religious or moral reasons and chose not to participate in the study training. One mentioned that some pharmacy technicians, who are often the first point of contact for patients at the pharmacy and play an important role supporting prescription processing, were not comfortable participating in mifepristone dispensing owing to religious reasons.”

Pharmacists who participated the study also claimed that “[their main challenge] was other pharmacists’ or technicians’ discomfort or refusal to dispense and the impact on scheduling. Although pharmacists’ refusal did not impact patients’ ability to obtain the medications, the pharmacy had to coordinate to have a trained, willing pharmacist ready to provide the medication,” authors wrote.

While the study concluded there was a positive response from pharmacists at these pro-abortion sites, they also reported multiple concerns ranging from a lack of potential pharmacists willing to dispense the drug in “conservative” states, to questioning why the abortion facility didn’t dispense the drug (something that used to be required under the REMS). Others voiced a concern about a possible lack of confidentiality for the patient, and “[a] few pharmacists expressed a concern that chain pharmacies under pressure to meet quotas might compromise pharmacist training and patient counseling to save time.”

5. Pharmacy protocol not yet available

A January 2022 e-mail response from the FDA to Live Action News indicated the FDA did not yet have sufficient data to warrant pharmacy pick up of the drug. “At this time, we don’t have data to determine whether mifepristone for medical termination of early pregnancy can be dispensed safely through retail pharmacies in accordance with the REMS,” FDA wrote (emphasis added). Then, an August 12 e-mail from from the FDA to Live Action News indicated that the process to determine pharmacy distribution had not been fully approved. “FDA will promptly review the REMS modification submissions made by the applicants; once any submissions are approved, the REMS modifications will be effective,” the email read (emphasis added).

Despite having no published pharmacy certification process approved by the FDA in July of 2022, the Biden administration sent out a letter essentially threatening pharmacies who “refuse” to fill prescriptions for mifepristone. Given the bias of surveys on pharmacists attitudes combined with the threats of the Biden administration, it is becoming clear that the goal is not the safety of women but the expansion of abortion.