Though the U.S. Food and Drug Administration has only approved the abortion pill for use up to 10 weeks (70 days), reports indicate that it is being used to kill preborn babies later in pregnancy, well past this limit. In addition, several cases have emerged which suggest that abortion industry profiteers may not be properly assessing the gestational age of the pregnancies, resulting in the deaths of babies much later in pregnancy as a result of abortion drugs.

The Centers for Disease Control and Prevention (CDC) reports that in 2019 over 900 “medical” (chemical) abortions were reported to have been committed at or over 14 weeks of pregnancy, according to 42 reporting areas (excluding California, District of Columbia, Illinois, Louisiana, Maryland, Massachusetts, New Hampshire, New York State, Pennsylvania, and Wisconsin).

Due to a lack of accurate gestational assessments, incompetency, and even deliberate flouting of the FDA’s limits, horrific cases are occurring, with babies killed later in pregnancy. In some cases, the pregnant woman was administered these abortion drugs without her consent.

These cases are also occurring in other countries including the UK, which has a 10-week cut off for ‘DIY’ home abortions. A recent BBC report noted that “[t]he National Network of Designated Health Care Professionals (NNDHP), which represents senior NHS doctors and nurses who fulfill child-safeguarding roles in England, has recorded 47 cases of early medical abortions that actually resulted in mid- to late-pregnancy terminations, across all ages, since the start of the pandemic, in March 2020.”

17 weeks: Former doctor Sikander Imran spiked his pregnant girlfriend’s drink with abortion inducing drugs while she was carrying his child at 17 weeks, and she miscarried hours later. He was sentenced to three years in prison. The UK Daily Mail reported that doctors conducted a blood test after the heartbreaking loss and found an excessive amount of misoprostol (the second drug of the abortion pill regimen) in her system.

18 weeks: A Gynuity Health Projects sponsored “clinical trial” experiment targeted Latin American women in Colombia for the abortion pill who were from 13 to 18 weeks gestation. The trial was terminated in July of 2021, citing “difficulties with recruitment, COVID 19 pandemic.”

20-21 Weeks: A sixteen-year-old girl in the UK was given only a phone consultation for the purchase of abortion pills at British Pregnancy Advisory Service (BPAS), which determined that she was less than eight (8) weeks pregnant. According to a report in the BBC, after the pregnant teen took the pills, she felt “really bad” pain and needed to push. She was transferred by ambulance to the hospital where it was concluded she had been between 20 and 21 weeks pregnant.

22 weeks: A lawsuit filed against Planned Parenthood of Southern New England alleges that the assessment of the abortion corporation’s certified nurse midwife (CNM) Gannon Ward was so egregiously off that she misdated a late pregnancy at just six weeks and three days, claiming there was no fetus was visible – only an empty sac. The pregnant woman who was sold an abortion pill gave birth two days later to a 22-week stillborn baby boy whom she named Kyle Shawn Brady. He was delivered into a toilet.

24 weeks: The British Pregnancy Advisory Service (BPAS) openly advertises use of the abortion pill regimen through 24 weeks of pregnancy. They add this caveat: “If your pregnancy is over 22 weeks’ gestation you may also require feticide…” 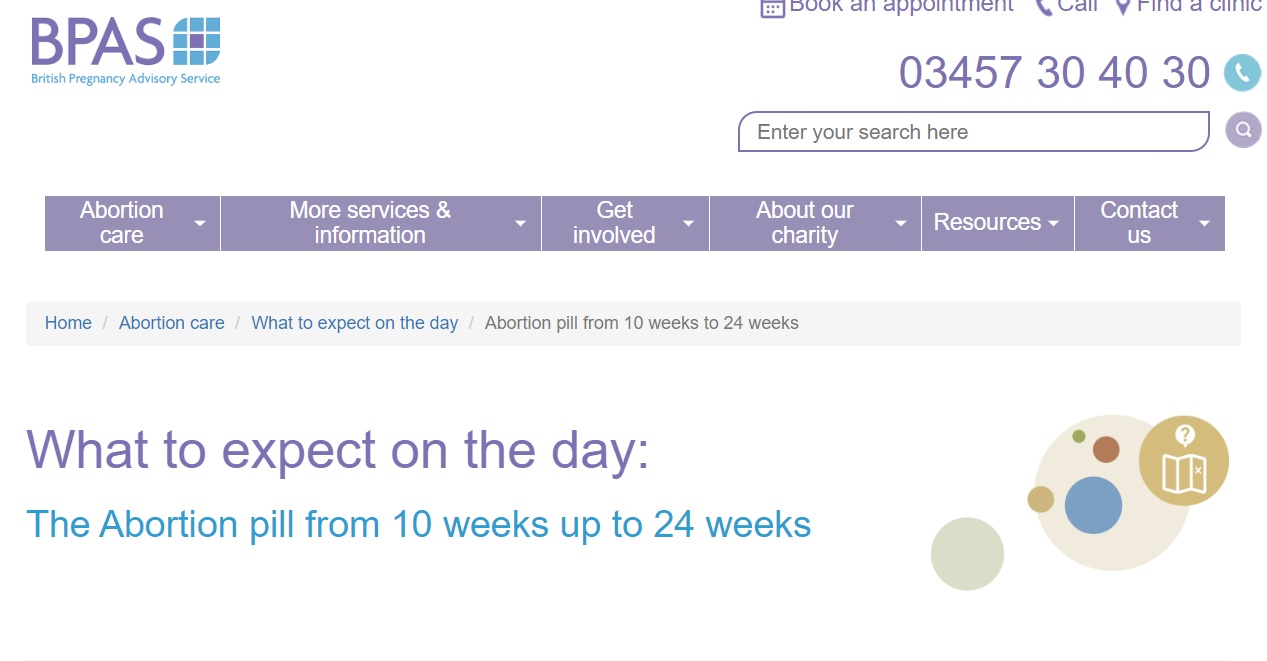 26 weeks: A woman on Twitter using the handle Aba released a long thread describing how the father of her child allegedly slipped misoprostol to her without her knowledge; this eventually took the life of her baby at 26 weeks.

28 weeks: Last year in the UK, police investigated the death of a 28 week baby who was stillborn after the mother was mailed abortion drugs under The British Pregnancy Advisory Service’s (BPAS) “pills by post” program.

30 weeks: A woman in the UK who was told she was just 12 weeks gestation when she took the abortion pill delivered her 30 week baby at home. The infant, named Ronnie by his parents, later died. The coroner determined that the ultimate cause of death was brain damage.

The group Abortion on Trial discovered how abortionists had experimented on hundreds of women for a study by administering the abortion pill regimen during late abortion procedures. The study, which used abortion drugs from 24 to 35 weeks of pregnancy, “aimed to assess differences in time from misoprostol initiation to fetal expulsion by regimen group” but the abortionists “stopped administering mifepristone” a year later “because of a lack of perceived benefit,” authors wrote.

The study was done by abortionists at Southwestern Women’s Options, the facility involved with the death of Keisha Atkins.  Atkins died following her legal abortion procedure in the second trimester, committed by SWO’s abortionists. Of note, the study’s authors mention a death of one of their study participants, writing, “One death (0.4%) occurred in a patient who received mifepristone and misoprostol who developed shortness of breath during the induction. She died after hospital transfer due to a pulmonary embolus,” which was Atkins’ cause of death, according to the medical examiner.