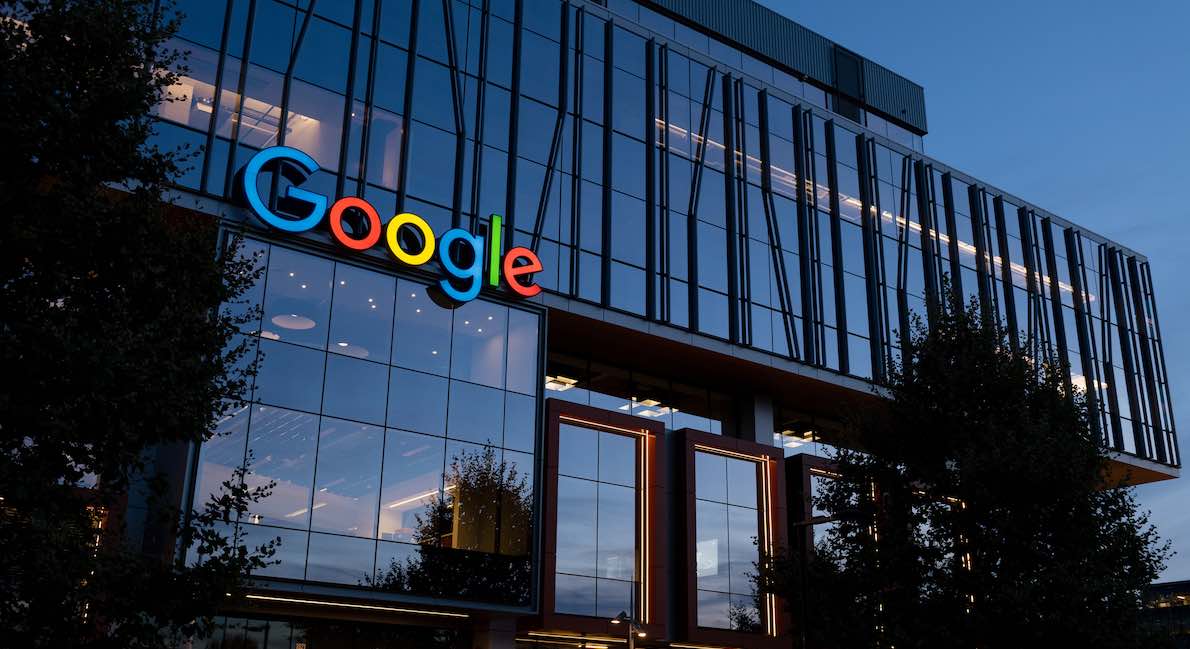 A recent report from the Wall Street Journal (WSJ) has revealed that, despite claims to the contrary, Google executives and engineers actively alter the search engine’s results in favor of big business and executives’ opinions, using blacklists and auto-complete to determine which web addresses appear at the top of the search. One of the common search topics the search engine seems to have modified the results for is the term abortion.

Google holds an astounding 90 percent of the market share for all search engines, including Yahoo, DuckDuckGo, and Bing. It is so widely trusted that it’s become a verb rather than a name in the English language, and it is the most highly trafficked website in the world, helping its parent company earn over $30 billion in annual profit, according to WSJ. Basically, Google holds the power to inform the world and therefore control what versions of the truth it uses to answer the 3.8 million queries typed into the company’s search bar every minute.

According to the report from WSJ, when Google first began some two decades ago, it was built on the idea that search algorithms would do a better job than human beings in wading through the information available on the internet and spitting out the best results for the search users. In both private meetings and during congressional testimony, top Google executives have said that algorithms are objective and autonomous. They are meant to be “unsullied by human bias or business considerations” according to WSJ.

“We do not use human curation to collect or arrange the results on a page,” reads the Google blog. Yet the corporation doesn’t share details about how exactly the algorithms work, which leads to obvious concerns.

WSJ found that Google “has increasingly re-engineered and interfered with search results to a far greater degree than the company and its executives have acknowledged.” They’ve done so as a result of pressure from businesses as well as the influence of outside interest groups and governments. And WSJ said that Google’s interference with authentic search results based on algorithms has “increased sharply since the 2016 election” including — despite denials — using blacklists to prevent particular websites from showing up in the search results.

% of 1st-page results for "abortion" that direct to Planned Parenthood's website:

U.S. foreign law requires that certain sites — such as those showing child abuse or those with copyright infringement — don’t appear in search results, but Google seems to have gone beyond that. WSJ found that Google uses blacklists to determine what appears in the auto-complete function, in which suggestions appear as a person types into the Google search bar. They have done this to block certain information on controversial subjects. This makes some sense when it comes to preventing inappropriate information appearing when a person searches, for example, a celebrity name. But when it comes to topics such as abortion or immigration, the information that the corporation is allegedly blocking isn’t inappropriate; it just doesn’t line up with their opinions.

Take a look at these auto-complete examples for the search term “abortion is.”

Bing’s auto-complete for term “abortion is.” 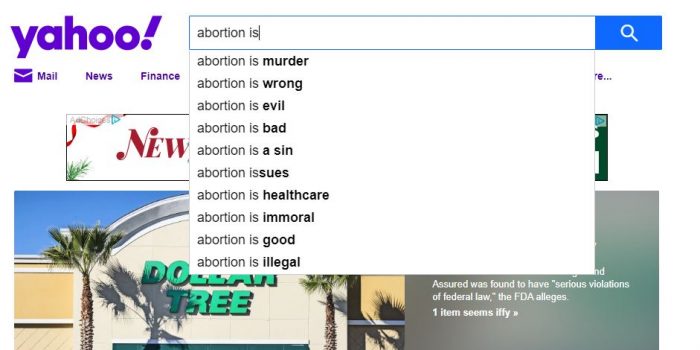 Yahoo’s auto-complete for the search term “abortion is.” 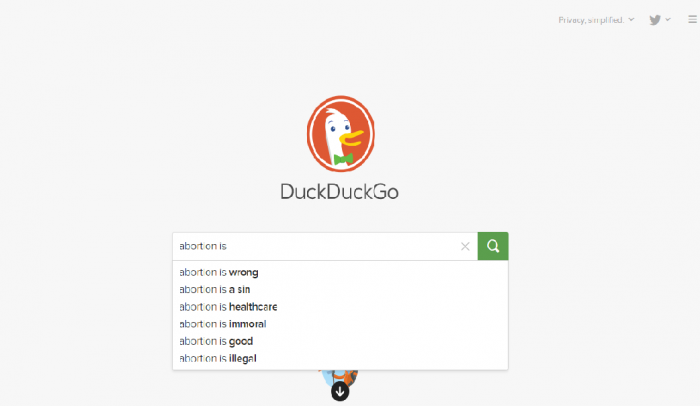 DuckDuckGo’s auto-complete for the search term “abortion is.” 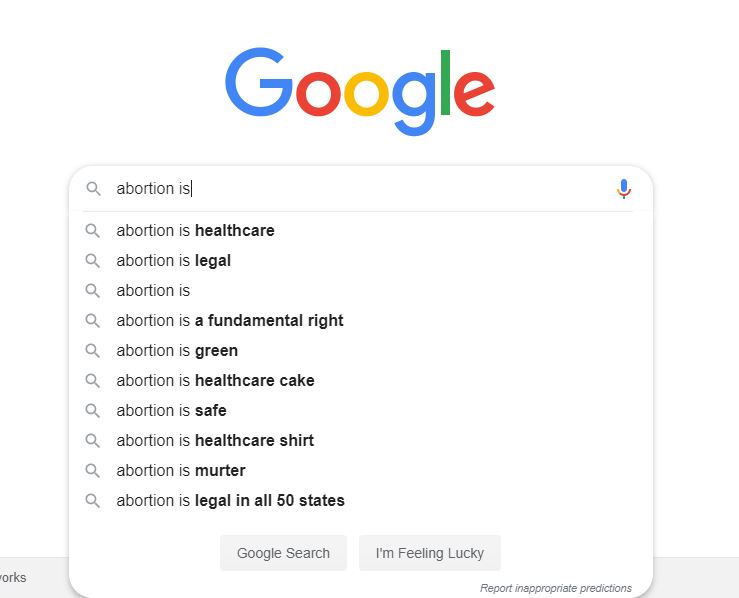 Google’s auto-complete for the search term “abortion is.”

The results for Google are shockingly different from those of the three other search engines. When using the search term “abortion,” DuckDuckGo’s top search result is an ad for the pro-life group Alliance Defending Freedom. Yahoo and Bing results were varied. But on Google, the first search results for “abortion” tell the searcher where they can go to have an abortion, along with Planned Parenthood’s website — which was not tagged as an advertisement as Alliance Defending Freedom was tagged on DuckDuckGo.

A 2016 internal investigation at Google found that up to 25 percent of its search queries returned misinformation, according to WSJ and a company executive. That works out to about two billion searches each year that return what the corporation says is misinformation – though the company doesn’t want to actually define what that means. Google formed a team known as “Project Owl” in which engineers worked to push certain webpages down in the search results based on its “authoritativeness.” All of this increases concerns about how Google influences and determines what their search users see.

Altering algorithms isn’t the only act that signifies the Big Tech corporation’s desire to push abortion. In May, the company announced it would be forcing abortion-related ads to state whether or not a facility provides abortions. In July, a leaked document showed that Google interfered in Ireland’s 2018 abortion referendum by blacklisting certain terms from search results. And among other controversial news regarding Google and abortion, a top executive there was caught on camera in September assaulting a pro-life activist.

“It’s very convenient for us to say that the algorithms make all the decisions,” one Google executive told WSJ. However, evidence is showing that this simply isn’t true, and that speaks volumes about the company’s abortion stance and whether or not the company is truly untarnished by human biases as it claims.