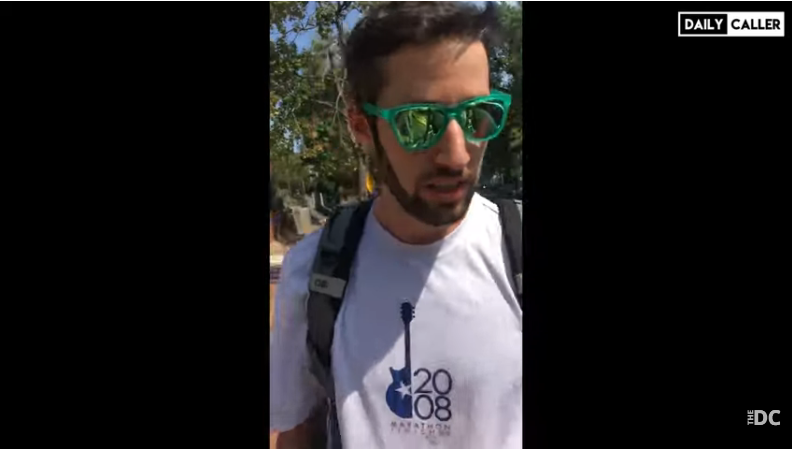 UPDATE, 12/12/19: An emailed press release from Dr. Michael New announced today that the pro-life activist has filed a civil lawsuit:

This month, Washington, DC pro-life activist has Mike Gribbin filed a civil lawsuit against Quinn Chasan. the Head of Customer Analytics for Google Cloud. During the afternoon on Saturday August 31, Gribbin was chalking pro-life messages on the sidewalk by the Washington, DC Planned Parenthood. Chasan stole Gribbin’s chalk and physically assaulted Gribbin. Gribbin was able to capture the assault on video.

Gribbin filed a report with the Washington Metropolitan Police. However, they have yet file charges against Chasan. As such, Gribbin has decided to pursue legal action against Chasan.

Michael New, a Catholic University of America professor who coordinates weekly prayer vigils outside the DC Planned Parenthood is pleased that legal action is being taken against Chasan.  “I am disappointed that the Washington Metro Police Department has not yet filed charges against Quinn Chasan. However, I am pleased that Mike Gibbin is pursuing legal action. Pro-life activists are not targets. No one should have to fear physical violence for espousing pro-life views in public. A ruling in Gribbin’s favor will make it clear that individuals who harm peaceful pro-life activists will be punished.”

Chasan’s assault on Gribbin was covered by various news outlets including the Daily Caller and Live Action News.

Mr. Gribbin is being represented in court by attorney John Garza. The pretrial date is February 21, 2020.

9/5/19: A top Google employee allegedly assaulted a pro-life activist outside a Washington, D.C. Planned Parenthood on Saturday. According to the Daily Caller, the incident involved Quinn Chasan, head of Customer Analytics of Google Cloud for the U.S government.

The alleged victim, Michael Gribbin, used his phone to capture video of the incident. According to Gribbin, Chasan stole the bag of chalk he was using to write pro-life messages on the sidewalk near the Planned Parenthood location. Video footage shows Gribbin following the man identified as Chasan demanding that he give the chalk back. Instead, the alleged assailant is seen taking the chalk out of the bag and throwing it.

The video continues with Chasan walking around the corner and unlocking his bike to leave. Gribbin attempts to prevent him from leaving until police arrive and Chasan appears to assault Gribbin. According to the Daily Caller, Gribbin says he was punched between eight and 12 times over the course of the incident and has bruises on his torso, leg, and on his forehead.

The Daily Caller obtained an incident report that states, “V-1 [victim] called for Police assistance after he was punched and pushed by S-1 [suspect] after a heated argument turned physical in the 400 block of M street.” The report continues, “N.E. M.P.D Officers arrived on scene where V-1 flagged Officers down to give his account of events. This is an open case.”

A spokesperson for the department told the Daily Caller, “No further information is available at this time. This case remains under investigation.”

In the video, Chasan refused to wait for police to arrive saying, “He [Gribbon] was writing anti-abortion sh*t on the sidewalk and preventing me from leaving.”

“That’s because you stole my chalk,” Gribbin replies.

“Dude, I’m gonna kick the sh*t out of you again if you don’t get off my sh*t,” Chasan says.

The Daily Caller reports that multiple requests for comment from Chasan and Google spokespeople were not returned.

The alleged incident over the weekend is the latest example of growing violence against peaceful pro-life sidewalk counselors. Earlier this year, an 85-year-old pro-life activist was assaulted outside a San Francisco Planned Parenthood. Other pro-lifers have been roundhouse kicked and violently attacked.