JAMA Network Open has published the results of a mail order abortion pill “retrospective cohort study” co-authored by a doctor who admits to receiving payments from the original abortion pill manufacturer, Danco Laboratories. Additional authors of the study, “Safety and Efficacy of Telehealth Medication Abortions in the US During the COVID-19 Pandemic,” are directly tied to the University of California San Francisco (UCSF), which trains future abortionists. All of the authors claim that mail order (telehealth) abortion during the COVID-19 pandemic is safe.

Due to serious risks associated with the abortion pill, the Food and Drug Administration (FDA) implemented a safety requirement called REMS, which required prescribers of the abortion pill Mifeprex to have an in-person meeting with abortion clients to accurately determine gestational age and rule out potentially deadly ectopic pregnancies.

Then, well before the COVID-19 pandemic, the abortion industry expanded its abortion pill clinical trials and rolled out a “no test” abortion pill protocol, eliminating a requirement for tests — a move which potentially endangers women.

This was decided despite the fact that even the pro-abortion American College of Obstetricians and Gynecologists (ACOG) has admitted that a large percentage of women do not accurately date their own pregnancies. This matters in abortion, because failure rates and complications of abortion drugs increase as gestational age increases.

But under pressure from the abortion industry, in April of 2021, the Biden-Harris FDA issued a temporary change allowing the dispensing of the abortion pill by mail under the guise of the COVID-19 pandemic.

The extremely small sample of just 141 clients — only 110 of whom responded — were customers of an unregulated abortion pill dispensary called Choix, Inc. (“choice” in English) which “shared deidentified health record data for all patients” with the authors’ research team.

Online, CHOIX, Inc. admits it is operated “by a team of nurse practitioners [Cindy Adam and Lauren Dubey], doctors [only one of whom is listed], and engineers in California.”  According to Ms. Magazine, the organization began offering the abortion pill to anyone over the age of 16 on October 28, 2020, in California. Staff physician Aisha Wagner previously worked for UCSF’s Women’s Option Center, an abortion facility at the University of California San Francisco.

According to the study authors, out of the 110 clients who responded, “105 (95%) had a complete abortion without intervention. Five patients (5%) required medical care to complete the abortion, 2 of whom were treated in emergency departments.  No patients reported any major adverse events,” the authors claimed.

“For a study of this nature, 141 patients is a very small sample size,” Dr. Michael New, Research Associate at the Busch School of Business at The Catholic University of America and associate scholar at the pro-life Charlotte Lozier Institute told Live Action News. However, Dr. New pointed out that “out of the 141 patients who obtained chemical abortions, 13 patients did not respond to a follow up survey. Additionally, the researchers were unable to obtain information about outcomes from 18 additional patients.”

“Overall, the researchers have no information about outcomes from over 20 percent of the women who obtained chemical abortions. That raises serious concerns about the credibility and reliability of these findings,” Dr. New stated.

Even the study authors had to acknowedge this fact, writing, “This study is small with some loss to follow-up, and thus some adverse events and ongoing pregnancies may have been undetected.”

Dr. New then compared the study to other studies with significantly higher sample sizes that showed the dangers of the abortion pill. “A 2015 Obstetrics and Gynecology study which found that chemical abortions have a complication rate that is approximately four times higher than surgical abortions analyzed a comprehensive dataset of over 50,000 California Medicaid patients who obtained abortions,” New noted. “A 2009 Obstetrics and Gynecology study with a similar finding analyzed outcomes from approximately 42,000 Finnish women who had abortions.”

Nationally, it is important to note that changes made to the REMS by the FDA in 2016 no longer required the manufacturer of the abortion pill, Danco Laboratories or its generic GenBioPro, to report non-fatal adverse effects.

Dr. Ushma Upadhyay is an Associate Professor at UCSF’s Advancing New Standards in Reproductive Health (ANSIRH). ANSIRH is part of UCSF’s Bixby Center for Global Reproductive Health, and its focus is abortion. Ironically, in 2019, well before the pandemic, Dr. Upadhyay advocated a “no test/no touch” approach where she and her colleagues suggested that abortion providers simply “believe the woman” about the exact dating of her pregnancy.

Leah R. Koenig also works at UCSF with ANSIRH on studies that “focus on testing new models for abortion services,” according to her online bio. Her LinkedIn page reveals she previously worked at the Bill and Melinda Gates Foundation, a known financier of pro-abortion organizations which currently funds DKT International, a global distributor of the abortion pill and abortion kits.

Dr. Karen Meckstroth is on staff at UCSF and is the director of Women’s Options Center, an abortion facility which commits abortion up to the 23rd week of pregnancy. It is also one of the sites for a pharmacy-dispensed abortion pill clinical trial. She was the only author to disclose a potential conflict of interest.

According to the JAMA study, “Dr Meckstroth reported receiving personal fees from Danco, Inc, a distributor of mifepristone, for staffing a US Food and Drug Administration–mandated expert hotline. The mifepristone used in this care was purchased from GenBioPro, not Danco. No other disclosures were reported.” Meckstroth is listed on other studies as a Danco “consultant.” 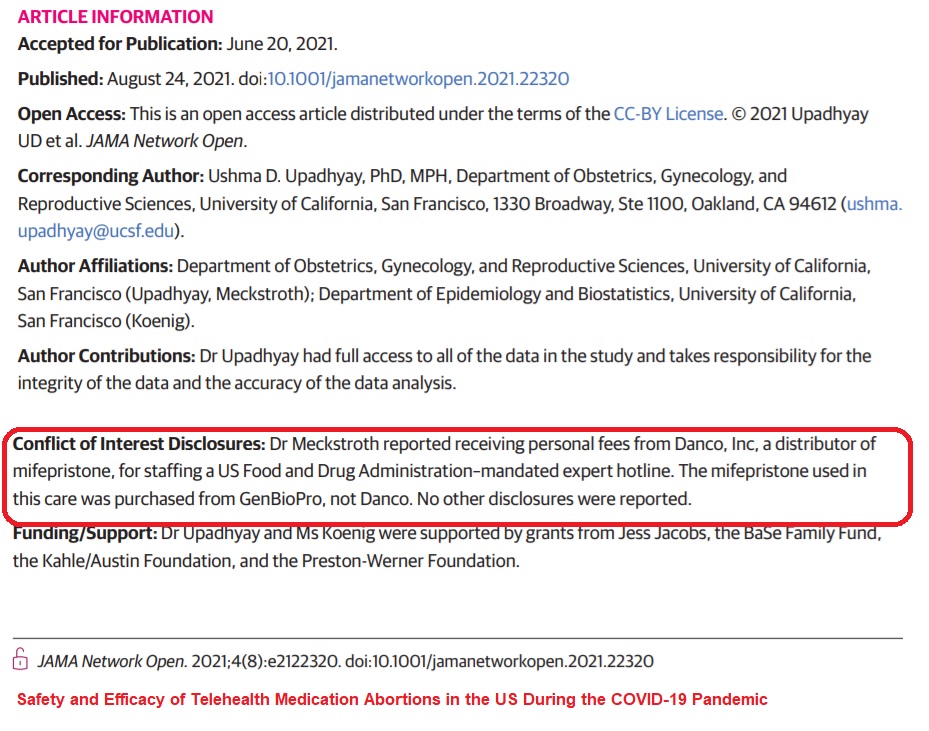 It is no secret that original investors in Danco (the Packard and Buffett Foundations) have invested in the UC system. In past years, Buffett gave $78 million to UC — and according to the New York Times, is the primary financier of the Bixby Center’s Ryan Residency Program at UCSF.

GenBioPro, the generic version of Danco, is heavily funded by the Packard Foundation, which also invested well over $14.2 million in Danco shortly after it was established by the eugenics-founded Population Council.

ANSIRH publishes workbooks on abortion training. This curriculum was established with financial help from Packard and is supported by NAF, Gynuity, ANSIRH, Planned Parenthood, the Society of Family Planning, Danco, and others. The curriculum’s website also admits that it “receives unrestricted educational grant funding from Danco, LLC,” and has for years.

This abortion pill study was not the first time an author had serious conflicts of interest connected to the pill’s manufacturer or early abortion pill investors. And given the fact that the abortion industry stands to make a killing on the abortion pill while pro-abortion media refuse to call out the obvious biases, it most likely will not be the last.