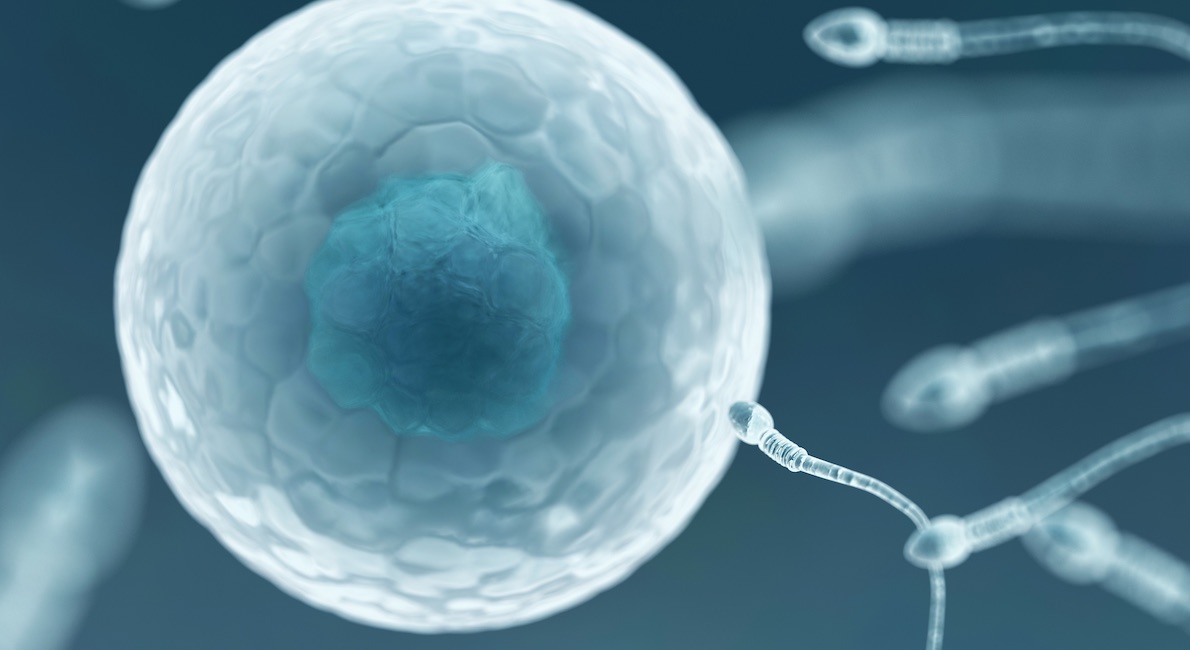 Many assume that the American College of Obstetricians and Gynecologists (ACOG) is an unbiased organization, frequently quoted as a medical authority by mainstream media. In fact, it is anything but unbiased and is at the forefront of the effort to expand abortion, specifically the abortion pill. As Live Action News has documented, the ACOG has a history of ties to advocates of population control. The ACOG’s move toward decriminalizing abortion began in the 1960s and ultimately ended with the organization officially supporting unrestricted abortion on demand.

In his book, “Abortion and the Pro-life Movement,” Dr. John Willke claimed that in the mid-1960s, ACOG officials and former Planned Parenthood president Alan F. Guttmacher, M.D, sought to redefine the terms “conception” and “pregnancy.” The commonly accepted understanding of “conception” was fertilization, the moment egg and sperm fuse, but the redefinition of “conception” was changed to mean implantation, the moment the days-old human being implants in the uterine lining. The redefinition was not based on science; instead, it appears to have been motivated by a desire to promote population control and the acceptance of certain contraceptives.

The change was finalized by the ACOG’s 1965 Committee on Terminology, which, according to Harvard Medical School Professor John D Biggers, accepted the new definition to read, “Conception is the implantation of a fertilized ovum.”

But in 1972, Biggers noted that the ACOG committee updated the definition to read, “Conception is the implantation of the blastocyst. It is not synonymous with fertilization.” 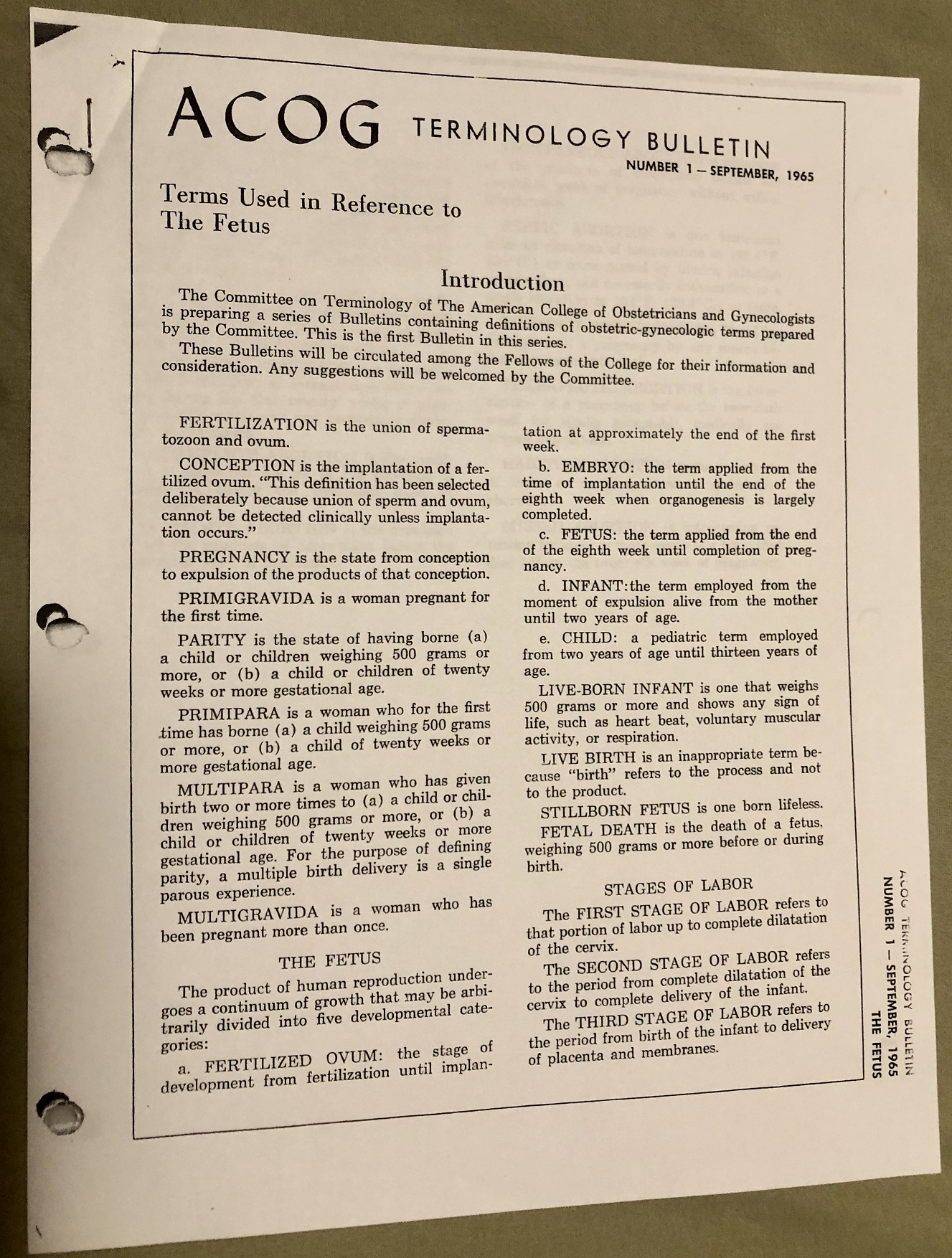 Leading that 1972 committee as chair was former president of ACOG (1962-1963) Edward C. Hughes who founded the American Academy of Obstetrics and Gynecology in 1951, the forerunner of ACOG. Myron Gordon, a member of the Association of Planned Parenthood Physicians (AAPP), was also on that committee. The AAPP was founded by Guttmacher in 1963 before being renamed the Association of Reproductive Health Professionals (ARHP) in 1987. According to ARHP, the organization was originally based out of Planned Parenthood offices and was funded by the organization.

“Before 1964, scientists agreed that pregnancy was established at the time of fertilization because that event was known to signal the beginning of embryonic life,” wrote author June Mary Zekan Makdisi in her paper ,”Genetically Correct: The Political Use of Reproductive Terminology.”

So, why the change in terminology? 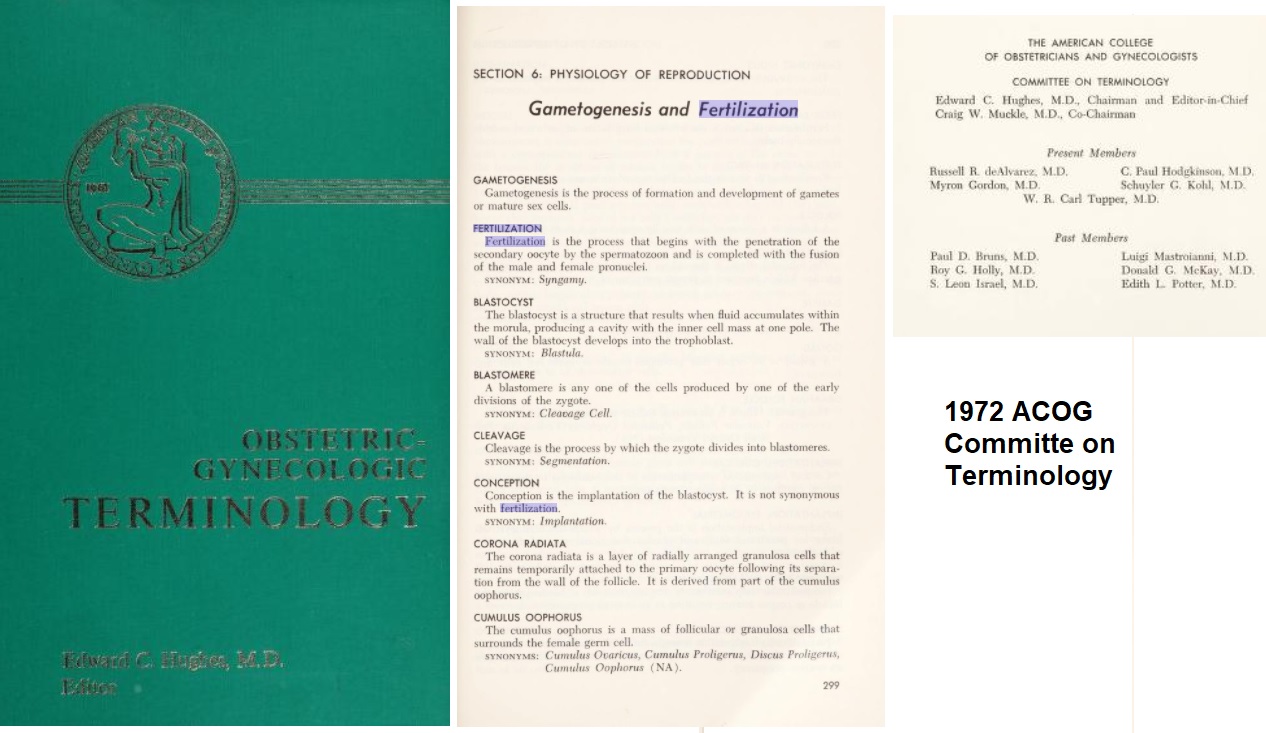 According to Makdisi, “As oral contraceptives began to find a market in the mid 1960s, concerted attempts were made by influential medical groups to alter long-standing definitions associated with reproduction.” The likely reason for the redefinitions, Makdisi claimed, was to “attempt to separate contraception from the hot-button issue of abortion in order to promote the social acceptance of chemical contraceptives.”

ACOG’s 1965 terminology change was put in place after the Second International Conference on Intra-Uterine Contraception in 1964, according to Makdisi. That conference, which largely discussed newly developed intrauterine contraceptive devices (IUCD) was sponsored by the Population Council, a eugenics organization founded by John D. Rockefeller III, later responsible for bringing the abortion pill into the United States.

During the conference, Taylor noted, “It has been suggested that we ought to set our definition that pregnancies start at implantation. I think it ought to occur to us that we are talking about a theological definition, not a biological definition, and this group can’t possibly help in making this definition.”

Dr. Christopher Tietze, a Population Council consultant who once received Planned Parenthood’s infamous Margaret Sanger award disagreed, telling conference attendees, “I would like to take issue with the chair on what I hope has not been a definitive theory. I fully agree with you, sir, that the time at which a human life or any life begins is a philosophical question, but I submit that throughout history the theologians and the jurists have always taken into account and have listened to the prevailing medical and biological consensus of the times, and I think this is still true.”

Tietze then suggested that if the medical community changed the definition, others will follow, saying, “If a medical consensus develops and is maintained that pregnancy, and therefore life, begins at implantation, eventually our brethren from the other faculties will listen.”

In summarizing the conference, Guttmacher suggested there were “eminent theologians on our side even if it is proved that fertilization is not prevented by the IUCD… if fertilization is achieved, it doesn’t necessarily mean that the whole battle is lost and that we are producing abortion.”

He then made this astonishing admission: “I leave this meeting with a great sense of optimism. I leave it with a feeling that we can now talk about controlling a population, whether it is through the use of IUCD or orals.” (emphasis added) 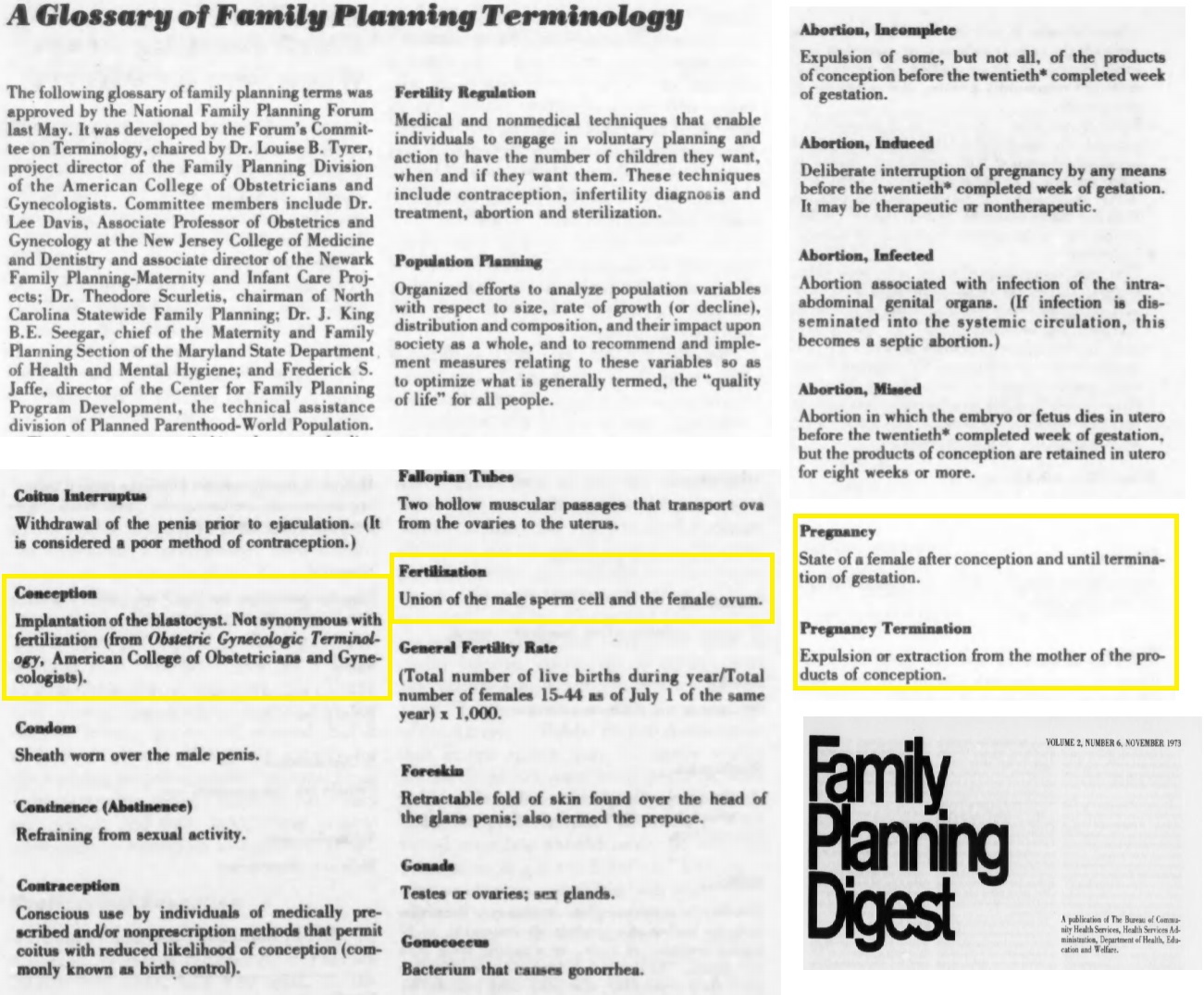 Tyrer was also medical director of Planned Parenthood of Northern Nevada and a former recipient of Planned Parenthood’s Margaret Sanger Award. Tyrer was described as “the first woman to be hired as a full-time staff physician” by the ACOG in 1970. Tyrer “joined PPFA in 1975 as its first vice president for medical affairs, and later went on to serve as medical director of the Association of Reproductive Health Professionals. An ardent advocate of mifepristone, she was instrumental in bringing the drug to the United States,” PPFA also wrote.

How a redefining of terms resulted in a mislabeling of abortifacients

The deliberate effort to muddy the line on when human life begins has resulted in more modern and so-called “emergency contraceptives (ECs)” such as Ella and PlanB One-Step being categorized by the Food and Drug Administration (FDA) as birth control, despite clear indications in FDA labels that they can also (at times) prevent the new human being from implanting in the wall of the mother’s uterus. 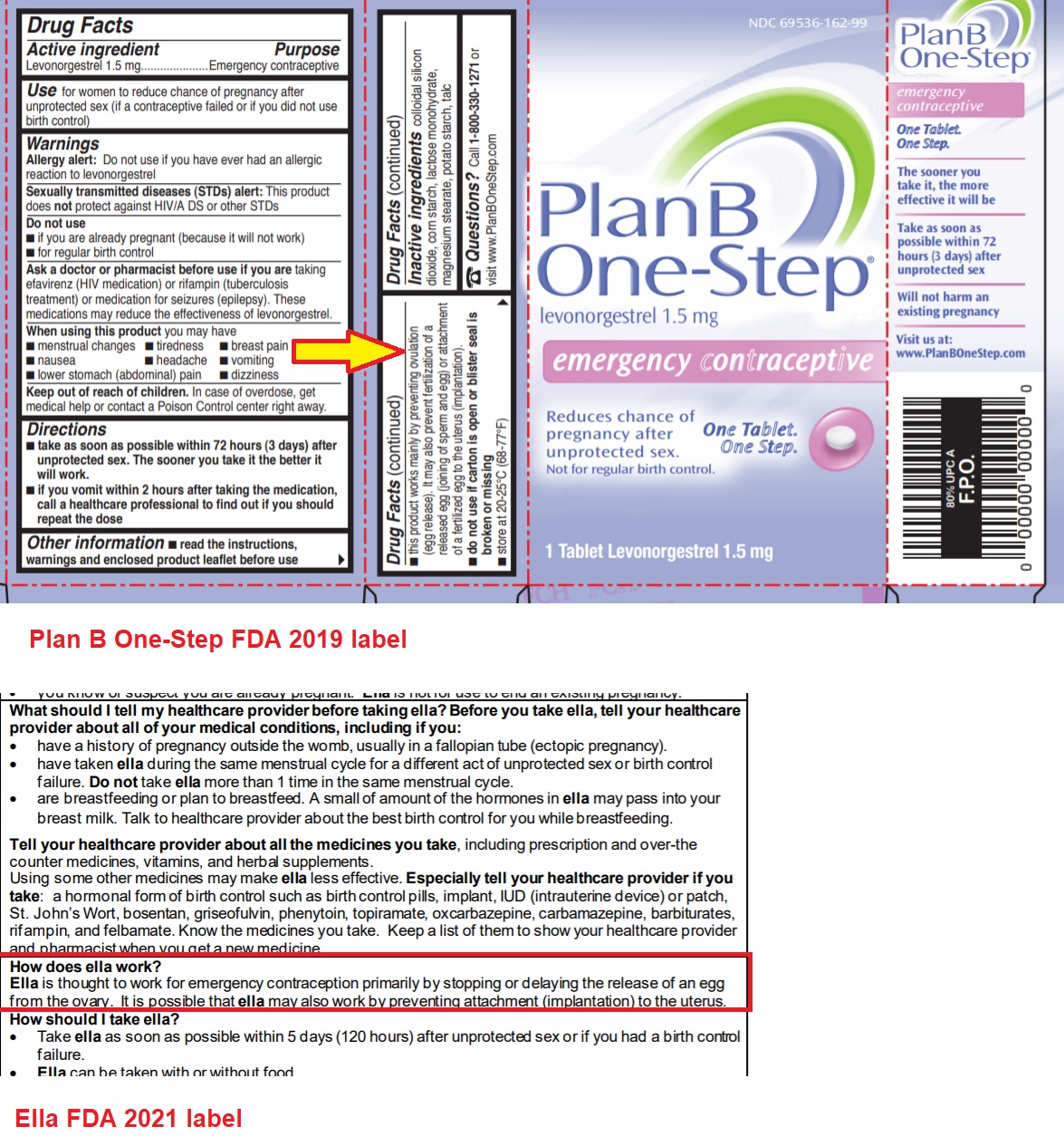 The abortion industry has capitalized on this confusion.

According to a previous Live Action News report, the New York-based Early Options abortion facility is even telling women that six weeks after fertilization, when her child is implanted in the uterus and has a beating heart, eyes, and finger buds, her body is still “primarily preparing” to be pregnant.

In addition, Planned Parenthood, the largest chain of abortion facilities in the nation, continues to mislead clients by insisting that “Pregnancy officially starts when a fertilized egg implants in the lining of the uterus.” While this may be the new definition, the scientific fact is that a human being begins at the moment of fertilization, and implants in the uterus days later. That human life exists for several days before implantation. As Live Action News previously reported:

EHD writes that on day two — just 24-48 hours after fertilization occurs — “pregnancy can be confirmed by detecting a hormone called ‘early pregnancy factor’ or EPF in the mother’s blood. … This substance helps prevent the mother’s immune system from rejecting the soon-to-be-implanted embryo and allows pregnancy to proceed.” In other words, well before a baby has implanted into the lining of his mother’s womb (which EHD says happens around day 6), he is already sending out signals that he is alive and is not a foreign substance to be rejected.

Emergency contraception, which manufacturers recommend be taken up to 5 days after unprotected sex, has the potential to cause the death of that new, living human being.

Despite pro-abortion efforts by ACOG and other population control enthusiasts to redefine when life begins, medical textbooks and scientists have for decades acknowledged the beginning of human life to be the moment of fertilization.