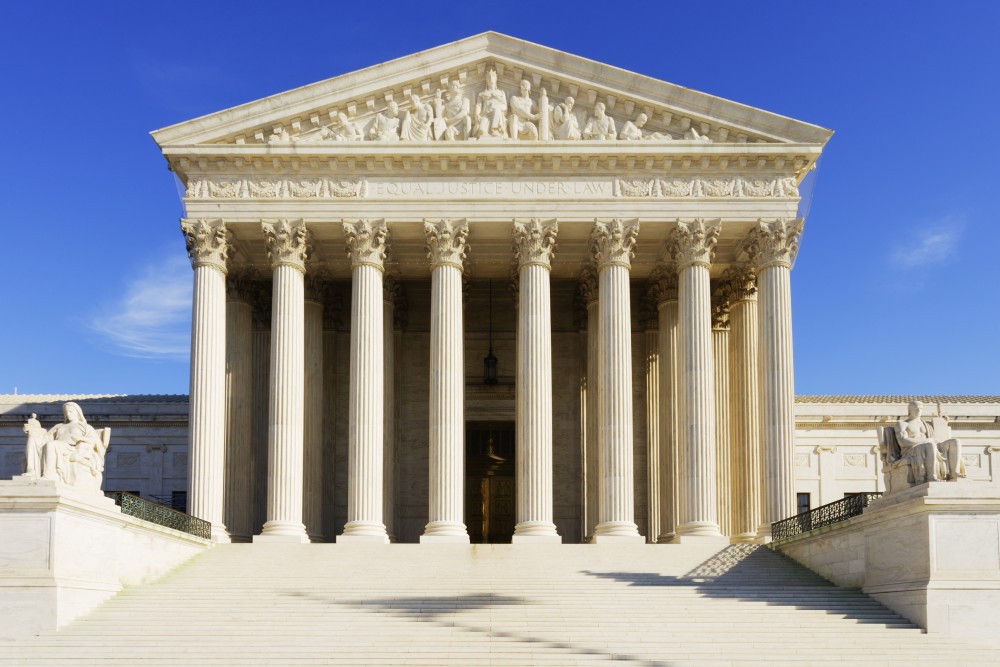 An amicus brief filed on behalf of Planned Parenthood Federation of America (PPFA), the Abortion Care Network (ACN), the Bixby Center for Global Reproductive Health, Medical Students for Choice, the National Abortion Federation (NAF), and Physicians for Reproductive Health (PRH), failed to address the question before the Supreme Court, which is, “may a State may prohibit elective abortions before viability?”

The so-called “viability rule” was based on an arbitrary cut-off, typically defined as the age at which a child can survive outside the womb. It first appeared in Roe v. Wade, and was not determined based on science but instead was a “legislative” or political move by the Court considered by many legal scholars to have no basis in the Constitution.

The case before the Supreme Court, Dobbs v. Jackson Women’s Health Organization, would save tens of thousands of human babies if upheld. It centers around a Mississippi abortion law which restricts abortion after 15 weeks gestation (approximately four months). Abortions at this point involve dilation and evacuation or D&E, a gruesome (and much more risky) dismemberment procedure, described by former abortionist Dr. Anthony Levatino in the video below, which some claim should have no place in a civilized society.

But instead of addressing the question before the Court, Planned Parenthood et al. trotted out abortion providers who glorified their deadly craft while painting themselves as saviors of women.

READ: Planned Parenthood abortionist: ‘Abortion is moral. Every reason for one is valid.’

Amna Dermish, a Planned Parenthood abortionist in Texas, argued against the law by claiming women seek abortion because they “don’t want to parent alone” or already “have another child.” She then boasted that abortion enabled one of her clients to “graduate from college and fulfill her dreams.”

Bhavik Kumar, who commits 20 to 30 abortions daily at a Planned Parenthood facility in Houston, opposed the Mississippi law because he claimed that “people with low incomes, and/or people of color” who “often” seek later abortions do so because they “do not realize they are pregnant until after the first trimester.”

Ying Zhang who commits abortions in Seattle, Washington, called abortion “care that people need to live their fullest and best lives,” but made no argument relating to the actual question at hand.

Ghazaleh Moayedi commits second trimester abortions in Texas and claimed that it is “love and compassion” that “drives” women to “choose abortion.” In the brief, Moayedi bemoaned a 32-week pregnant client’s legal inability to obtain an abortion as “not a failure on her part” but rather a “failure of our education system and our communities.” Moayedi recently testified that abortion is a “blessing” and an act of “love.”

DeShawn Taylor, described in the brief as “the first Black woman to own an abortion clinic in the United States,” failed to address the issue before the court and instead claimed that she was the victim of racism as a Black abortionist. She failed to explain why she then joined an amicus brief with Planned Parenthood whose own staffers alleged was “founded by a racist, white woman” and had a “present steeped in white supremacy.”

Taylor is founder and owner of Desert Star Family Planning clinic in Arizona and a senior medical director and consultant for GenBioPro, the generic of the abortion pill manufacturer. Taylor is one of the abortionists recorded in undercover video by the Center for Medical Progress admitting to committing abortions “up to 24 weeks.” She claimed in the brief that “abortion saves lives.”

Colleen McNicholas, chief medical officer for Planned Parenthood of the St. Louis Region and Southwest Missouri, commits abortion up until the point of viability. She has admitted before a Congressional panel that viability “could be at any point.” The fact is that a baby in the womb is viable so long as they are left in the protective environment where they can be nurtured and grow. She failed to address the question before the court and instead called it her “ethical responsibility” to trust that the client knows “what is best for them and their family.”

Kristina Tocce, medical director for Planned Parenthood of the Rocky Mountains, is author of a study on “umbilical cord transection” for a second-trimester D&E abortion in which the abortionist cuts the umbilical cord when the preborn child is still in the womb to “induce fetal demise.” She indignantly claimed that “nothing strikes abortion providers as more outrageous than Mississippi’s contention that abortion care is ‘demeaning to the medical profession.'”

Yashica Robinson, medical director at the Huntsville-based Alabama Women’s Center for Reproductive Alternatives, considered a “pariah even among the medical community” according to an interview with WNYC, claimed that “When you restrict abortion access, you end up with providers who aren’t competent to provide that care in an emergency.” And yet, despite this, multiple states are allowing non-physicians to commit abortions.

Amy Hagstrom Miller is President and CEO of the Whole Woman’s Health abortion chain headquartered in Texas, which “performs a lot more second-trimester abortions.” Miller seemed to suggest in the brief that it would be dangerous if a woman tried “to obtain pills from Mexico” because she could not travel out of state for an abortion. This is despite the fact that the industry itself is pushing for unfettered access to abortion pills online.

Mona Reis, founder of the Presidential Women’s Center in Palm Beach County, Florida, also failed to address the question before the Court and simply made the false claim that limiting abortion to 15 weeks would somehow “put people into crisis.” She called abortion one of the “most important decisions a woman will ever make.”

Lori Williams, clinical director and nurse practitioner at Little Rock Family Planning Services abortion facility in Arkansas called abortion “natural” and claimed it was her “calling” and “passion” — hardly an argument against the Mississippi law. 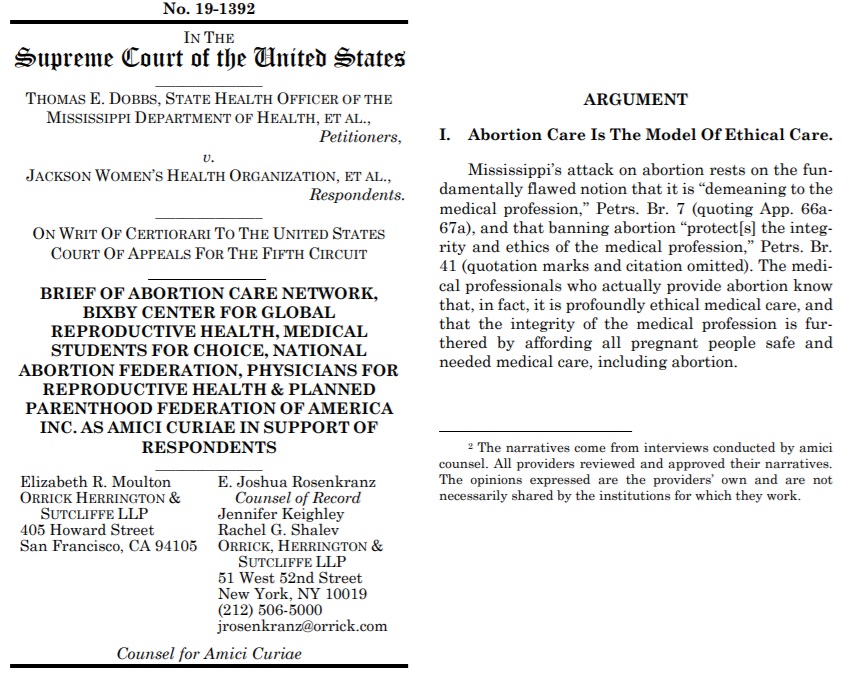 The brief referred to Mississippi’s reasonable abortion limit as an “attack on abortion,” claiming it “rests on the fundamentally flawed notion that it is ‘demeaning to the medical profession.’” It completely denied the fact that workers within the abortion industry themselves described one of the most commonly used abortion methods as destructive and violent, called abortion “killing,” and claimed dismembering preborn babies made them “sad.”

Planned Parenthood et al., referred to abortion as “profoundly ethical medical care,” which is “critical to people’s health and wellbeing” and claimed “the integrity of the medical profession is furthered by affording all pregnant people” the ability to “live out their own vision of a good, dignified life” by committing abortions.

Leigh Fitzpatrick Snead at the Washington Times saw through the foolishness of the brief, describing it as a “maudlin fog of stories meant to distract and gaslight.”

“Anyone paying attention can see from its brief that Planned Parenthood and the abortion industry have no legal argument to make. Their only hope is to distract from the facts of the case, which undoubtedly support Mississippi’s right to protect its most vulnerable citizens,” she pointed out.