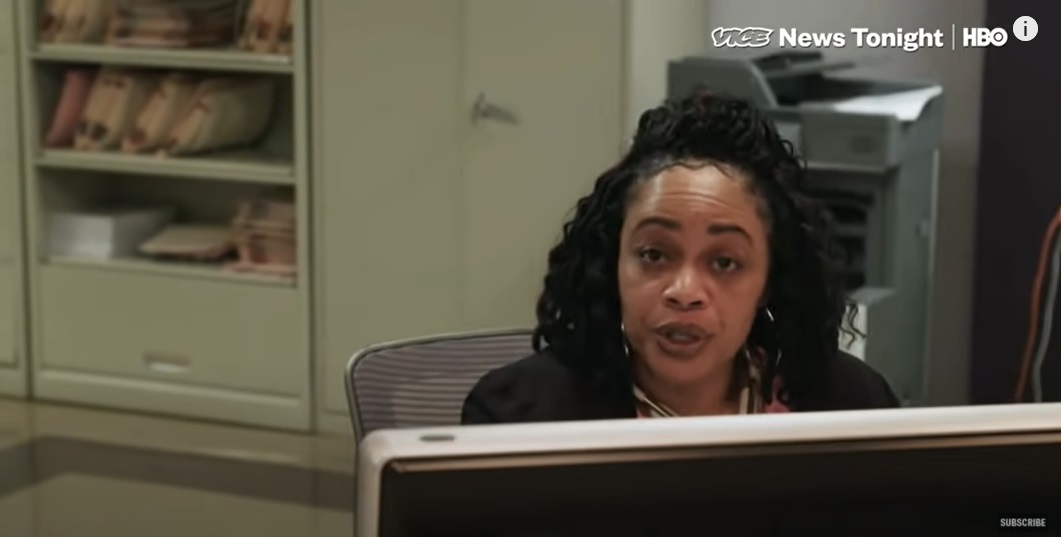 During the filming of a VICE News documentary in 2019, abortion nurse LaShonda Pinchon of the Alabama Women’s Center for Reproductive Alternatives in Huntsville, Alabama, was interviewed by filmmakers. Pinchon, the facility’s only full-time nurse at the time, said that it was very “hard to get somebody” to do her job.

Perhaps most notable, however, was Pinchon’s comparison of the killing of a preborn human being to removing a bunion. “…I feel that this should be as common as going to the doctor and having a bunion removed. Nobody ridicules you, asks you, ‘why did you have that knot taken off the side of your foot?’ So, nobody should be ridiculing you or asking you, ‘why did you remove that fetus from your uterus?'” she said.

VICE News failed to inquire what happens in the birth canal that suddenly turns the fetus into a person.

In a separate interview with WNYC, the former cardiac nurse called her job of 14 years as an abortion worker (at that time) a calling. “It’s like God was saying this is what I have for you,” she said.

In their report, WNYC tried to paint the facility’s abortionist, Yashica L. Robinson White, as a hero — but were forced to acknowledge that she was considered a “pariah even among the medical community” in Huntsville.

Though the media portrays abortion facilities as compassionate, clients of the Huntsville facility posted the opposite in online Google reviews. “I was 11 weeks when I got the surgical procedure…. The whole time I could feel everything the doctor was doing. It was the worst pain of my life,” read one review. “I cried during and after the procedure. The nurse was kind of rude every time she spoke to me it was always fast so I couldn’t really comprehend everything.”

Another client — an abortion patient — wrote:

The absolute worst part of this experience was waiting. The second worst part was being awake and being able to feel the doctor roughly tugging/pulling the fetus out of your body. It’s a feeling that I can’t explain….

Unfortunately, the nurse (I didn’t catch her name) had no bedside manner at all. She’s the last type of person any woman would want to be around during this type of situation. She was very monotone and unprofessional (cursing at the desk, headphones in her ear, and not really engaged with the patient).

Yet another client wrote:

This place is awful. Rude nurses, rude RUDE woman at the front counter, when taken to the back the nurses speak negatively about other patients. Extremely negative energy and the people who work there are far from comforting . Unprofessional horrible place. They made sure to make a hard experience 10 times harder… 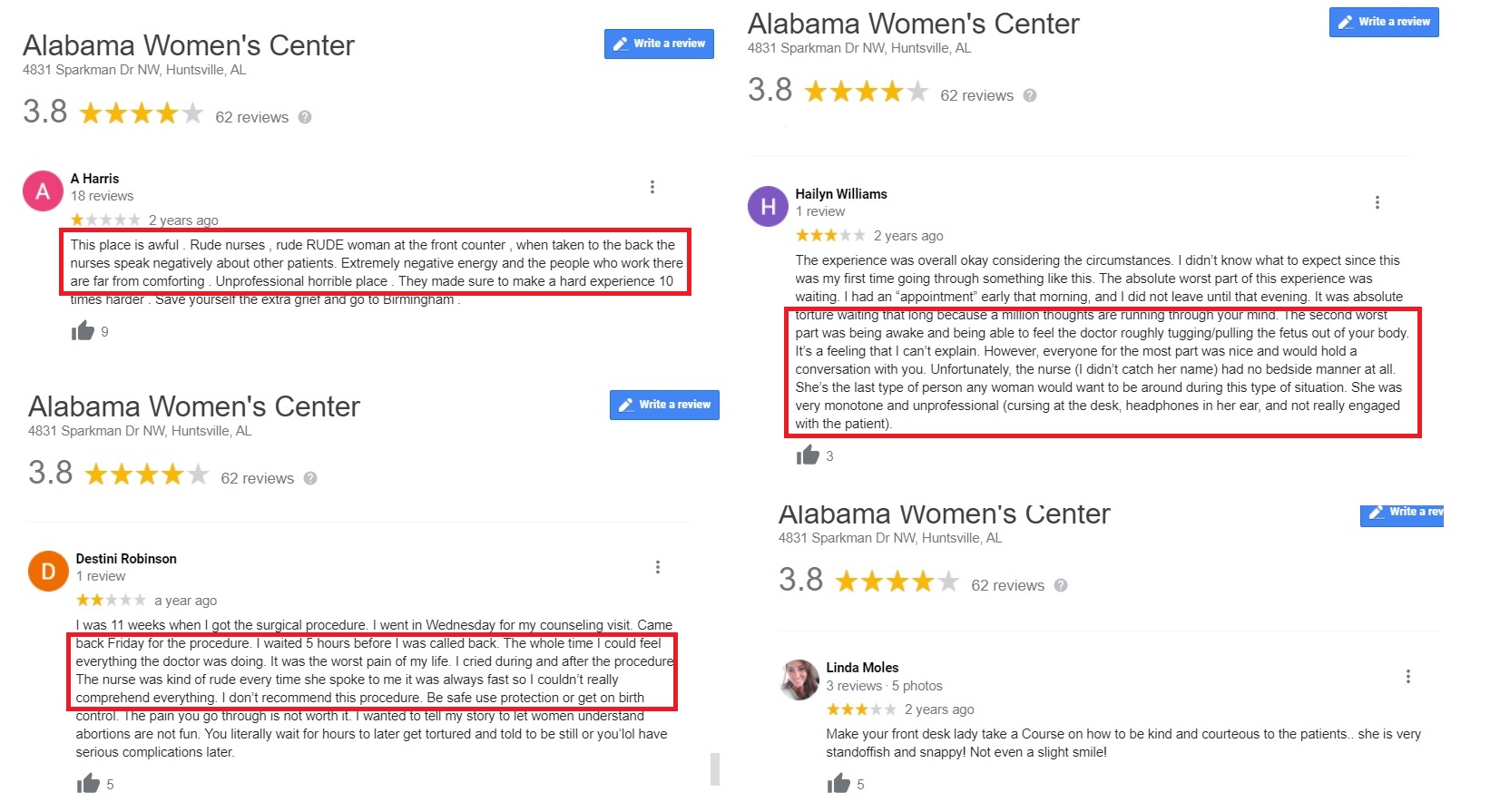 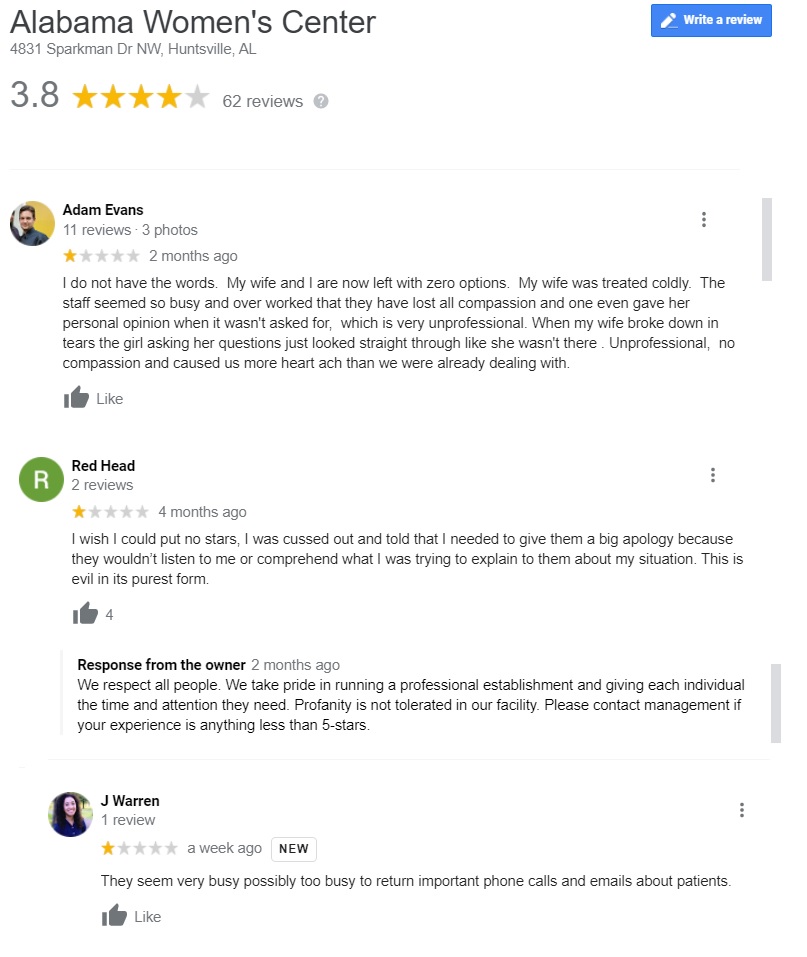 In a separate Google review, an Alabama Women’s Center abortion pill client experienced severe pain and felt dismissed by abortion staff with a “lack of compassion” before ending up at the ER. “The feeling was nothing as described. I have no words for how painful it was. I could barely catch my breath, I was stuck on the toilet, vomiting and honestly scared. The pain was so much worse than expected that I thought something was wrong and was worried and considered to call someone to take me to the hospital,” she wrote in part.

The patient was apparently told by the abortion staff not to go to the emergency room.

“She said that there was no need to go to an ER that they would just tell me the same thing and by the time I would be seen it would all be over. And I explained to her that I understood that it would be painful but it didn’t feel right and she reiterated the above,” the abortion client wrote.

“I insisted on being seen to just come to the clinic. I opted out due to how rude she was to me. She made me feel so small and unimportant. It went on for 8 hours in that severity,” she added. 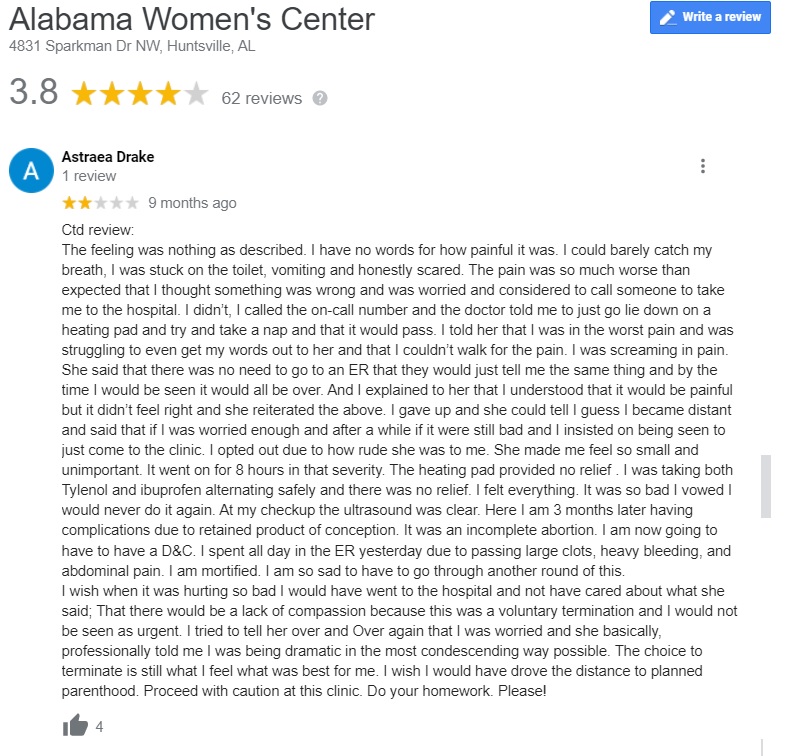 In the end, the abortion client claimed she needed to go to the ER and had “complications due to retained product of conception. It was an incomplete abortion,” resulting in a follow-up surgical procedure.

I am now going to have to have a D&C. I spent all day in the ER yesterday due to passing large clots, heavy bleeding, and abdominal pain. I am mortified. I am so sad to have to go through another round of this.

I wish when it was hurting so bad I would have went to the hospital and not have cared about what she said; That there would be a lack of compassion because this was a voluntary termination and I would not be seen as urgent. I tried to tell her over and Over again that I was worried and she basically, professionally told me I was being dramatic in the most condescending way possible.

According to their website, the Alabama Women’s Center commits surgical abortions “from five to twenty-one weeks gestational age (by last menstrual period).” Studies have shown that preborn children may feel pain beginning as early as eight  weeks. Despite attempts by media allies to present abortion facilities as victims, abortion is a lucrative business. A search at Dunn and Bradstreet revealed that this particular Alabama facility takes in $1.4 million in annual revenue.