Analysts reviewing the response in a 15-week abortion case before the United States Supreme Court have described the abortion facility brief as “weak,” using “outdated research and flawed analysis” and offering “no solid arguments in defense of Roe.” 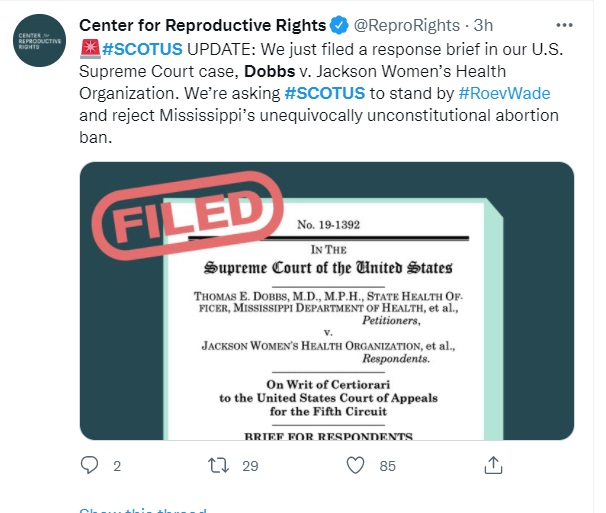 The case, which would save tens of thousands of human babies if upheld, was brought by Thomas E. Dobbs, State Health Officer of the Mississippi Department of Health. It centers around a Mississippi abortion law which restricts abortion beginning at 15 weeks gestation (approximately four months). All abortions are horrific but procedures at this gestational age have been described as brutal, barbaric and violent — killing which should have no place in a civilized society.

JWHO, the only abortion facility in Mississippi, brought the case “on behalf of itself and its patients, and Sacheen Carr-Ellis, M.D., M.P.H., on behalf of herself and her patients…” the document states. “The Providers offer abortion care up to 16 weeks 0 days LMP. Approximately 100 patients per year obtain an abortion after 15 weeks from the Providers.”

The brief attempts to paint Mississippi’s law as “extreme,” resting on the outdated notion in Roe v. Wade that abortion is a “right” and therefore a woman can end the life of her preborn child for any reason up to viability and even up to birth where states permit it.

JWHO’s brief accepts the unsound “arbitrary” viability-rule enacted in Roe, even though it was never based on science but was instead  a political decision. In Roe, the Justices deemed viability as the point in pregnancy when the child could survive outside the womb (which, at that time, was approximately 24 weeks; today it is weeks earlier). The brief refuses to consider scientific evidence presented by the multiple legal scholars and organizations on the developing child in the womb.

Mississippi is forced into its extreme position because it has nothing serious to offer in place of the viability line. Instead, the impractical and unstable alternatives the State proposes confirm that the Court was right in Casey to retain the viability line. There is no heightened scrutiny framework (stripped of the viability rule) that lower courts could administer against the inevitable cascade of state abortion bans that would follow if the Court does anything here other than affirm. Nor could the Court apply the State’s version of an “undue burden” approach without gutting Casey and Roe. The very essence of those decisions is the right of every individual to decide whether to continue a pre-viability pregnancy to term.

The only way, therefore, to avoid inflicting profound damage to individual autonomy and women’s equal status in society is to adhere to the considered judgment of the Court’s prior decisions.

The JWHO claimed in the brief that if Mississippi’s law is upheld, the decision would “scuttle a half-century of precedent and invite states to ban abortion entirely.”

In response, Mississippi’s Attorney General Lynn Fitch said the JWHO brief offered “no solid arguments in defense of Roe and the Court should overturn this flawed and hopelessly unworkable precedent.”

“[F]ifty years, abortion policy has been plagued by flawed legal rules that even some of the most ardent abortion supporters have refused to defend”, the AG also stated in her public release.

JWHO’s brief also resurfaced the false narrative that women will resort to illegal abortions or DIY abortions if the law is upheld. Despite their fearmongering, the abortion industry and their supporters are the ones promoting these dangerous measures.

“Banning abortion would also result in forcing some people to attempt to end their own pregnancies. Those without the resources to end a pregnancy safely would be exposed to increased health risks and deterred from seeking aftercare for fear of investigation or even arrest and prosecution,” JWHO’s brief states. “And make no mistake: there will inevitably be individuals who are unable to access abortion before 15 weeks or before any particular pre-viability point in pregnancy.”

“For many, the barriers will simply be too high, and they will be forced to endure the substantial risks of continued pregnancy and childbirth,” the abortion facility which profits from abortion, later claimed.

JWHO’s brief was described as “weak” by Ryan T. Anderson, President of the Ethics and Public Policy Center.

He tweeted, “The abortionists have filed their brief with SCOTUS in Dobbs, the abortion case. It is surprisingly weak. Just screams “precedent precedent!” and “stare decisis stare decisis!” over and over. Almost as if there aren’t any better arguments at their disposal…” 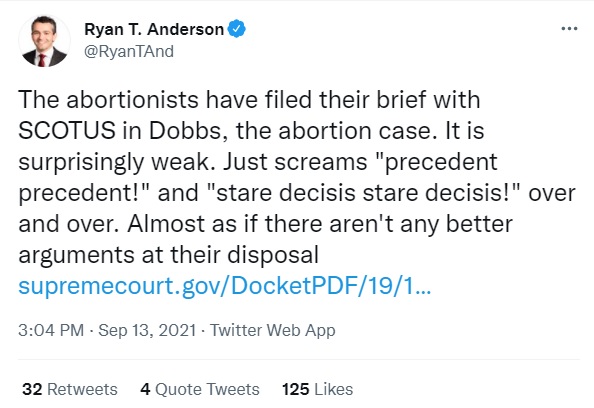 CLI claimed JWHO’s brief used “outdated research and flawed analysis” while it “ignored both modern science and basic legal facts” about things like fetal pain. CLI pointed to updated research published in an article in “BMJ’s Journal of Medical Ethics postulating fetal pain experience ‘from as early as 12 weeks.’”

“Unsurprisingly, the abortion providers’ brief fails to grapple with the humanity of children in the womb and the brutality of abortion,” Reason for Life President & General Counsel Samuel D. Green told Live Action News. “Instead, the brief encourages loyalty to widely criticized Supreme Court decisions that ignore the scientific reality that human life begins at conception.”

In a public statement about the JWHO brief, SBA List President Marjorie Dannenfelser addressed the development of the previable child, writing, “But we know that by 15 weeks, an unborn baby’s heart has beat nearly 16 million times. She already shows a preference for her right or left hand, responds to taste, and can feel pain. Fifty years of unworkable jurisprudence has tied the hands of state lawmakers to follow the science and enact the will of their people in law.”

CLI President Charles A. Donovan said the Court should simply “Follow the science. An unborn baby at 15 weeks’ gestation is already an amazingly complex human being who deserves the same human rights as you and I.”

Samuel Green noted, “The Court should reject the brief’s familiar arguments and overrule Roe and Casey so that states can perform their duty to protect the most innocent and vulnerable among us.”

Nothing in constitutional text, structure, history, or tradition supports a constitutional right to abortion, nor is there a sound basis for the current viability guidepost that determines when states can enact limitations on abortion… It is time to return policymaking to the people where they can address abortion policy in a way that empowers women and promotes life.

For decades, Roe has been on a ‘collision course‘ with itself and legal scholars past and present have confirmed that viability doesn’t decide a child’s humanity. In past weeks, over 80 briefs have been filed in support of Mississippi’s law and now that JWHO has filed their brief, the Supreme Court has selected December 1, 2021, as the date when the Court will hear the oral arguments.