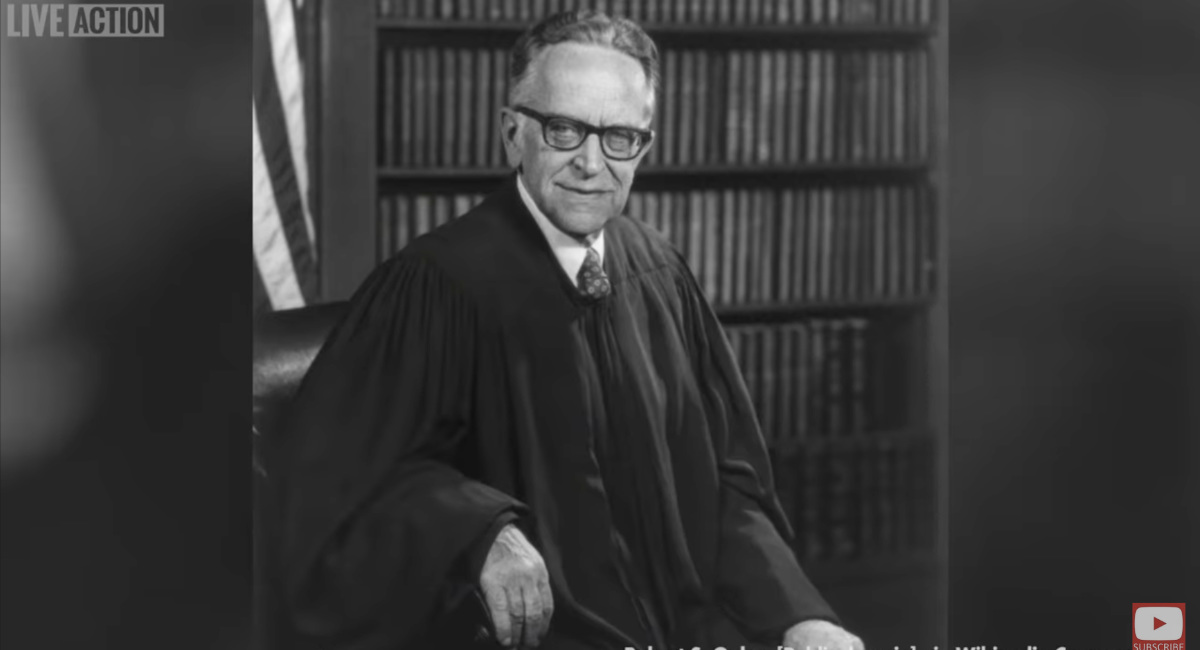 In the Supreme Court’s Roe v. Wade abortion decision, Justice Harry Blackmun allowed in his opinion for unrestricted abortion prior to “viability” — typically defined as the age at which a child can survive outside the womb (with 24 weeks as a longtime standard, despite the fact that children have since survived at 21 weeks). But Blackmun’s arbitrary 24-week line appears to be in conflict with a citation and definition used in a brief filed by Roe attorney Sarah Weddington as well as in a brief filed on behalf of the American College of Obstetricians and Gynecologists (ACOG).

The citation can be found in Louise Hellman and Jack Pritchard’s medical textbook, “Williams Obstetrics 493,” (14th edition from 1971).  The text stated at the time, “Abortion is the termination of a pregnancy at any time before the fetus has attained a stage of viability.” The medical reference book then went on to define viability this way: “Interpretations of the word ‘viability’ have varied between fetal weights of 400 g (about 20 weeks of gestation) and 1,000 g (about 28 weeks of gestation)…” 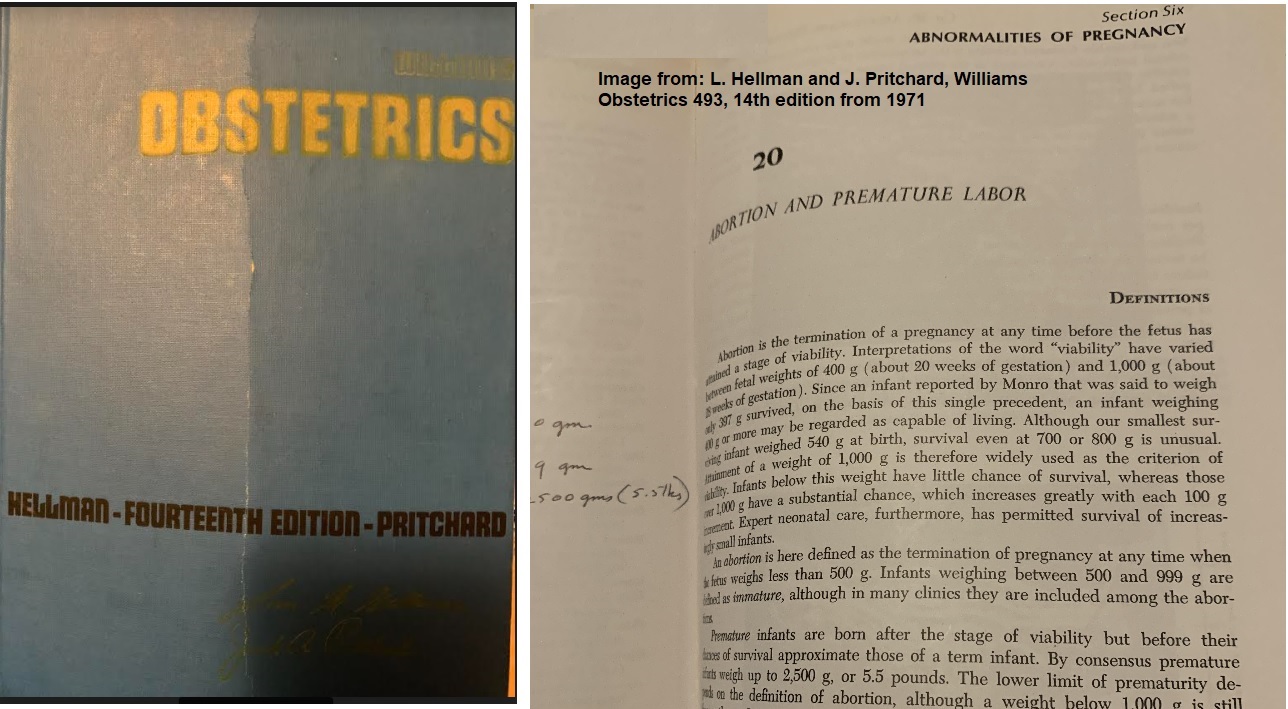 That citation was referenced by Roe attorneys Sarah Weddington, Linda Coffee, and Roy Lucas in a brief they filed to appeal a June 1970 decision by the U.S. District Court for the Northern District of Texas, a lower court ruling which eventually led to the case being heard by the Supreme Court.

Roy Lucas was a lawyer who helped fashion the “right to privacy” legal argument used in Roe v. Wade, according to the New York Times. He was once nicknamed “the father of the new abortion‐reform movement” according to research by Linda Greenhouse.

The image below from the Lucas/Weddington/Coffee brief shows an identical definition of “viability” as was printed in the Williams Obstetrics textbook.

A second friend-of-the-court brief was filed by Lucas in the Doe v. Bolton case (the companion case to Roe) on behalf of ACOG, the American Medical Women’s Association, the American Psychiatric Association, the New York Academy of Medicine, and others. That brief also acknowledged that the point of viability of the preborn child could be as early as 20 weeks. 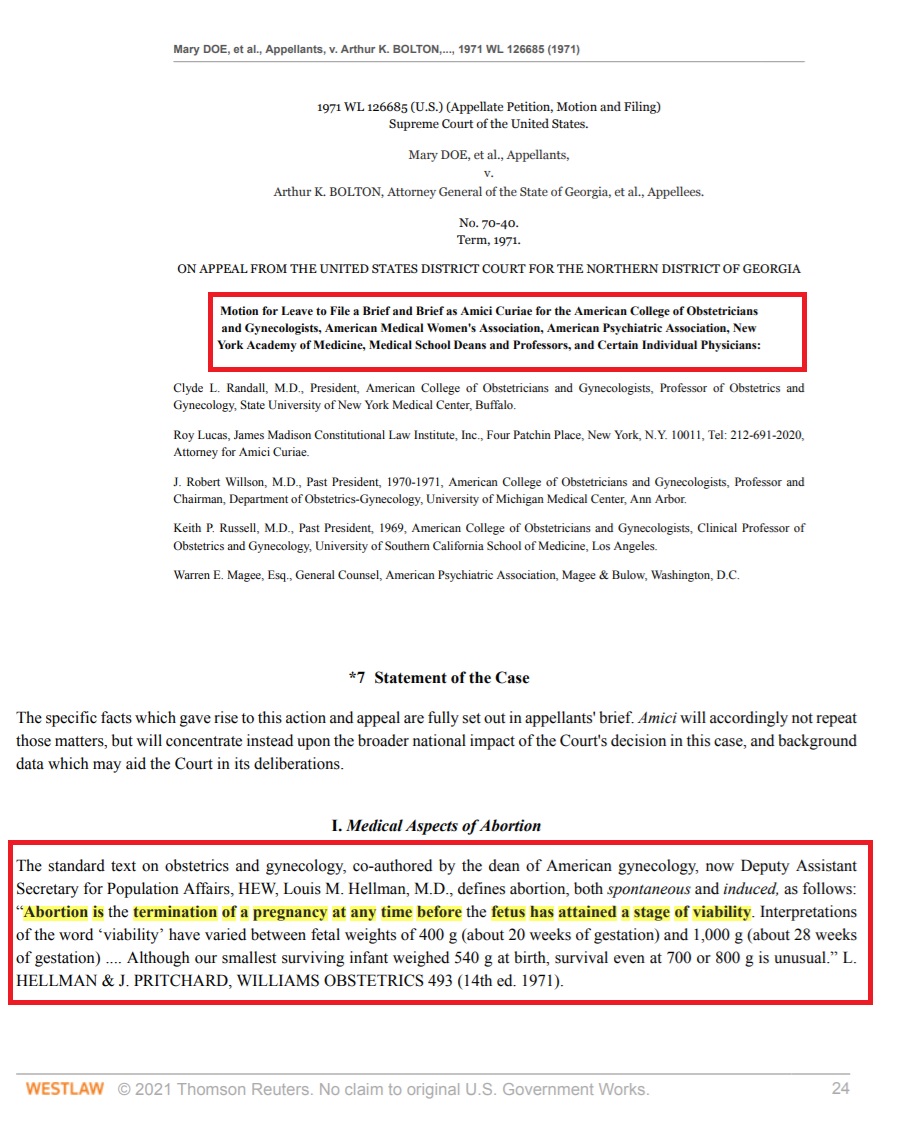 Signing on to the brief was ACOG president Keith P. Russell as well as former Planned Parenthood president Alan F. Guttmacher, M.D, among several others.

Guttmacher, a former VP of the American Eugenics Society, was the first medical doctor to head Planned Parenthood and was instrumental in leading the organization to begin committing abortions. Russell served on the board of Planned Parenthood of Los Angeles and served two terms as ACOG president. According to the Los Angeles Times, Russell “led medical professionals in their fight to liberalize the California abortion law in 1967.”

Interestingly, both editors of the Williams Obstetrics “viability” definition, Pritchard and Hellman, lent their support in the brief as well. In 1971, Hellman received Planned Parenthood’s Margaret Sanger award, named after their white supremacist founder. He became president of ACOG in 1974.

The New York Times claimed that Hellman favored the liberalization of abortion, reporting that, in 1973, Hellman “was in charge of population affairs for the Federal Government” where “his office made plans to distribute a film advocating legal abortion to public schools and colleges.” But the idea was reportedly “shelved by Caspar W. Weinberger, then Secretary of Health, Education and Welfare, when anti-abortion groups rose in opposition.” In 1977, Hellman left the department to become medical director of the Population Reference Bureau.

Greenhouse claims Lucas, who helped to draft both briefs, received funding from the Association for the Study of Abortion” (ASA), originally founded by Alan Guttmacher in 1964 as the Committee for a Humane Abortion Law and funded in part by the Rockefeller Brothers Fund. According to author David Garrow, Hellman also served on the ASA board.

“The Association for the Study of Abortion gave Lucas a grant to prepare a model trial brief that could be used to test the abortion laws of any state, based on the New York model — abortion only to preserve the mother’s life…” Greenhouse wrote in the New York Times.

ASA has been credited with the creation of the term “right to choose.”

“Right to life is short, catchy, composed of monosyllabic words — an important consideration in English. We need something comparable. Right to choose would seem to do the job. And … choice has to do with action, and it’s action that we’re concerned with,’ ” said Jimmye Kimmey, executive director of ASA. Kimmey once referred to the “fierceness of the opposition” claiming that if they received a favorable ruling in Roe, the struggle “would not be over” but instead the “beginning of a tough new era.”

A 1981 report published by the Philadelphia Inquirer, the “Dreaded Complication,” addressed babies born alive after attempted abortions. In it was evidence that some of ACOG’s leadership felt an apprehension to abortion past 20 weeks.

The Philadelphia Inquirer quoted Dr. Ervin Nicholas, then-director of practice activities for ACOG. “We’re not really very pro-abortion. As a matter of fact, anything beyond 20 weeks, we’re kind of upset about it,” he said.

The Inquirer asked, “If abortions after 20 weeks are a dubious practice, how does that square with abortion up to 24 weeks being offered openly in Los Angeles and New York and advertised in newspapers and the Yellow Pages there and elsewhere?”

But today, ACOG is staunchly pro-abortion. In fact, the organization’s evolution to supporting abortion came through the influence of population control enthusiasts connected to Planned Parenthood and the abortion industry, some which even helped ACOG to redefine when human life begins. And despite acknowledging that “viability” could be as early as 20 weeks, any apprehension to abortion past the 20-week gestational marker seems to have faded away; the organization today fails to represent the majority of its members while continuing to lend support and cover to the abortion industry while advocating abortion on demand at any stage of development.