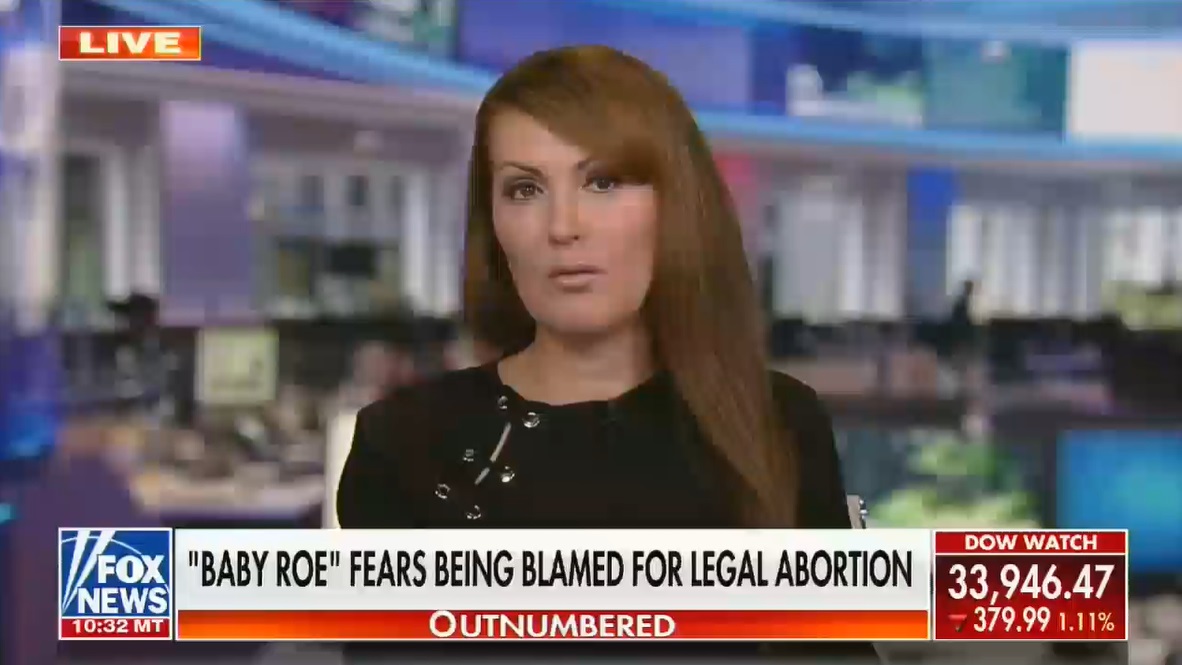 Eugenics is a pseudoscience which pitted the so-called “fit” against those deemed “unfit” to procreate. Its origins date back to the mid 1800’s, where it was promoted as an accepted science. By the early 1930s, the American Eugenics movement had become so influential that it was reported by some to have influenced Adolf Hitler in his aims to create a “master race.” Under its rubric in the United States, eugenicists shamefully targeted people of color, the disabled, and others with sterilization without their knowledge or consent. The memories of this tragic era still weigh heavily on memories of the victims and their families, including Fox News contributor Dagen McDowell, who recently disclosed on “Outnumbered” that her aunt had been eugenically sterilized “because she was mentally disabled.”

McDowell pointed out that in the same way that eugenics tarnished our nation, abortion will also be stain on the United States. Her statement caught the attention of the George Soros-funded group Media Matters, which uploaded the video but failed to include any commentary. Perhaps that is because McDowell is correct.

“I think that looking back, even a few years from now, we will look at legalized abortion, as many people already do, as legal infanticide and murder. And it will be a stain — the fact that it’s been legal for as long as it has been and so widely available,” McDowell stated. “It will be a stain on this nation for centuries to come in the way that the eugenics movement was.”

McDowell continued, noting that eugenics had personally affected her family. “My great-aunt Marguerite was sterilized against her will by the state of Virginia because she was mentally disabled. That practice did not end in this country fully until 1979. So only 40 years ago. So, I think that [abortion] is a greater tragedy and a greater pox on this country.”

It is estimated that the State of Virginia sterilized more than 8,300 people, under the state’s 1924 Sterilization Act, which became a model for other states, after the 1927 U.S. Supreme Court decision Buck v. Bell upheld it. The act was based on Model Law written by American Eugenics Society founder Harry Laughlin.

In 1933, Laughlin’s ideas were published by Margaret Sanger’s Birth Control Review, and in 1938 he became part of the Citizen’s Committee on Planned Parenthood. Laughlin was an unabashed Nazi sympathizer who, in 1936, “received an honorary degree from the Nazi-controlled University of Heidelberg as ‘a pioneer in the science of race cleansing,’” according to researcher Paul A. Lombardo.

Virginia repealed its discriminatory and harmful law in 1974, and in 2002, Virginia’s Governor apologized to victims of eugenic sterilization.

Abortion is directly tied to eugenics

Live Action News has previously documented how eugenics and abortion are historically tethered together. Not only were leaders in eugenics at the forefront in the push to legalize abortion, but many also advocated forced sterilization.

Even Supreme Court Justice Clarence Thomas has stated that the “use of abortion to achieve eugenic goals is not merely hypothetical.” He once wrote, “The foundations for legalizing abortion in America were laid during the early 20th-century birth control movement. That movement developed alongside the American eugenics movement. And significantly, Planned Parenthood founder Margaret Sanger recognized the eugenic potential of her cause.”

The opening of Planned Parenthood’s first facility in Charlotte, North Carolina, was linked to figures such as Wallace Kuralt, who headed a coercive eugenic sterilization program in the state.

Live Action News also previously documented that Planned Parenthood was a referral agency for Iowa’s sterilization board. Iowa State’s Eugenics Board Chairman Dr. S.M. Korson admitted a percent of their referrals came from the welfare office or Planned Parenthood. When Korson noted a decrease in sterilizations due to a “more humane and enlightened attitude,” Rev. Robert L. Webber — the executive director of Planned Parenthood of Iowa — attacked board members, saying they “should reinterpret the law and give it wider application than they do now or they should quit.”

Proctor and Gamble financier Clarence Gamble served on Margaret Sanger’s American Birth Control League board (as well as Planned Parenthood’s). He was a staunch advocate of eugenics, and because of a eugenics program influenced heavily by Gamble, Black men and women like Elaine Riddick were targeted for forced sterilization.

Watch Riddick’s emotional story from the documentary film Maafa21 below:

In 2020, Planned Parenthood finally admitted its eugenicist founder was a racist white supremacist. Planned Parenthood corporate, along with at least 19 affiliates, also acknowledged a present-day problem of systemic racism within the organization.

Eugenicists also influenced other high powered organizations to embrace abortion, such as the American College of Obstetricians and Gynecologists (ACOG), which moved to support abortion under the leadership of population control enthusiasts, some who were members of the American Eugenics Society (AES).

Osborn is reported to have said, “Birth control and abortion are turning out to be great eugenic advances of our time.” In his 1968 book, “The Future of Human Heredity,” he also admitted, “Eugenic goals are most likely to be attained under a name other than eugenics.”