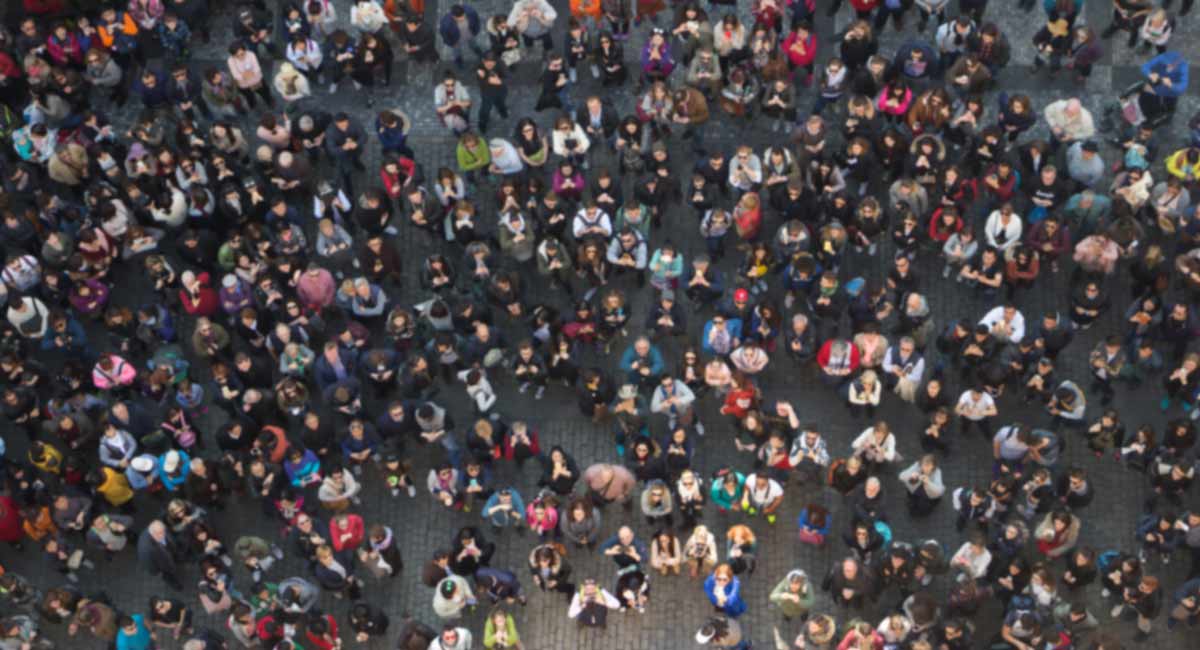 The tragic history of compulsory population control in our nation has deep roots in the eugenics movement. Eugenics is a discredited pseudo-scientific theory which has enabled society elites to attempt to curb or halt procreation among those they deem “unfit,” feebleminded,” “criminals,” or “defective” through tools like compulsory sterilizations, birth control, and abortion. Even today, allegations of such horrific abuses continue to surface, and it would appear that society has not learned the lessons of the past. If history is a teacher, we must understand how quickly these evil ideologies can spread if they are not opposed.

Eugenics has never really gone out of style. It has simply repackaged itself over and over. In 1977, John P. Holdren co-authored the textbook “Ecoscience,” which discussed coercive and voluntary population control methods. The authors said of voluntary methods, “If these relatively uncoercive policies should fail to maintain a low American birth rate, more coercive laws might well be written,” adding, “Indeed, it has been concluded that compulsory population-control laws, even including laws requiring compulsory abortion, could be sustained under the existing Constitution if the population crisis became sufficiently severe to endanger the society.”

According to the EugenicsArchive.org, eugenics was once heavily promoted and presented as “legitimate science”:

Eugenics traces its roots to Britain in the early 1880s, when Sir Francis Galton coined the term to mean ‘well-born’ … Financial support for the popularization of eugenics came both from individuals and foundations in America… By 1928, eugenics was a topic in 376 separate college courses, which enrolled approximately 20,000 students. A content analysis of high school science texts published between 1914 and 1948 indicates that a majority presented eugenics as legitimate science.

Indiana became the first state to pass a eugenic sterilization law in 1907. Oregon was the last, but did not abolish its eugenics board until October 1983. Although the total number of victims may never be known, it is estimated that 60,000 people, many minorities, were eugenically sterilized against their wills in the United States.

In an example of just one of the Supreme Court’s stunningly wrong rulings, the Court actually upheld Virginia’s eugenics sterilization law in the 1927 case of Buck v. Bell. “It is better for all the world, if instead of waiting to execute degenerate offspring for crime, or to let them starve for their imbecility, society can prevent those who are manifestly unfit from continuing their kind … Three generations of imbeciles are enough,” wrote U.S. Supreme Court Justice Oliver Wendell Holmes.

As a result, by 1931, 30 states had eugenic laws that would “target and systematically discriminate against some of the most vulnerable members of society,” wrote the AMA Journal of Ethics. Virginia repealed its discriminatory and harmful law in 1974, and in 2002, Virginia’s Governor apologized to victims of eugenic sterilization. 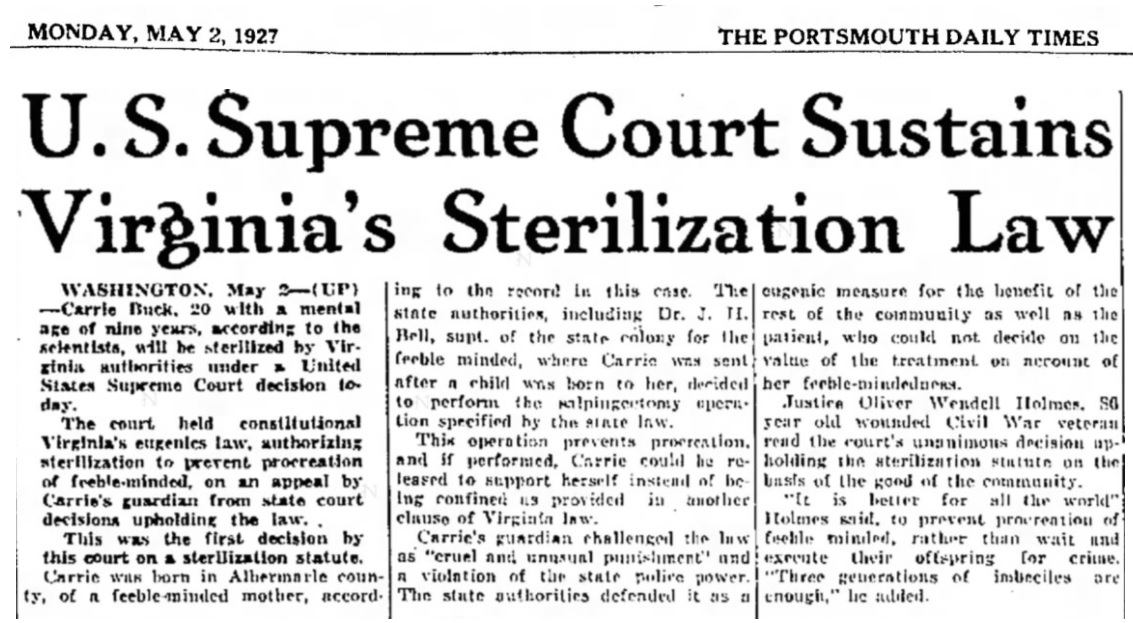 In 1932, Planned Parenthood founder Margaret Sanger, who suggested that authorities issue couples “licenses” to have children, delivered her “My Plan for Peace” speech in which she suggested the creation of a “Population Congress” to control population through “birth rates and immigration.”

She suggested the Congress should apply “a stern and rigid policy of sterilization, and segregation to that grade of population whose progeny is already tainted or whose inheritance is such that objectionable traits may be transmitted to offspring.”

“[T]he whole dysgenic population would have its choice of segregation or sterilization,” she added.

Proposals like this were often promoted as “voluntary,” but they were not.

In a letter Sanger penned to Mrs. Stanley McCormick in 1950, she proclaimed, “I consider that the world and almost our civilization for the next twenty-five years, is going to depend upon a simple, cheap, safe contraceptive to be used in poverty stricken slums, jungles, and among the most ignorant people. Even this will not be sufficient, because I believe that now, immediately, there should be national sterilization for certain dysgenic types of our population who are being encouraged to breed and would die out were the government not feeding them….” 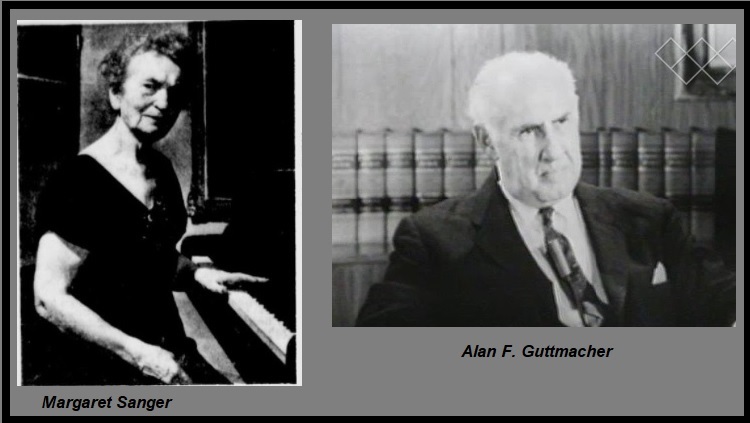 While Sanger was a vocal proponent of eugenic sterilization, Alan F. Guttmacher, a one-time Planned Parenthood president and vice president of the American Eugenics Society, desired “voluntary measures” for curbing population, although compulsory measures were never ruled out. As he saw it, if “voluntary measures” did not work, then force could become necessary. In 1966, Guttmacher told the Washington Post that if governments have to act officially to limit families, “[i]t may be taken out of the voluntary category.”

In 1970, Sarasota Herald Tribune reporter Lee McCall interviewed Guttmacher about the concept of limiting families to 2.2 children. Guttmacher responded that it was inadvisable for Planned Parenthood because it would essentially cause a public relations backlash. “It would be difficult,” Guttmacher said. “In the first place it would probably split the organization. Also we would have trouble with minority groups accepting this. So even though the plan may be desirable and would make us a stronger nation, a less polluted nation, I feel it would be strategically unwise at this time,” he stated.

In regards to potentially “splitting” the organization, Guttmacher knew some leaders of Planned Parenthood favored coercive population control measures. A 1969 New York Times article quoted a Planned Parenthood board member as saying, “What it all comes down to is that we want the poor to stop breeding while we retain our freedom to have large families. It’s strictly a class point of view.”

In a 1969 Medical World News Report, Guttmacher acknowledged that coercion could be used. “Each country will have to decide its own form of coercion and determine when and how it should be employed,” he said. “At present the available means are compulsory sterilization and compulsory abortion. Perhaps some day a way of enforcing compulsory birth control will be feasible.”

In a piece he wrote on family planning published in the 1969 American Journal of Nursing, Guttmacher again floated the idea of coercion. “I would like to give our voluntary means of population control full opportunity in the next 10 to 12 years. Then, if these don’t succeed, we may have to go into some kind of coercion.” he wrote. “There is no question that birth rates can be reduced all over the world if legal abortion is introduced….”

That same year, Population Council president Bernard Berelson published an article suggesting that if voluntary methods of birth control were not successful, it may become necessary for the government to put a “fertility control agent” in the water supplies of “urban” neighborhoods.

By 1971, Professor Edgar Chasteen proposed enforcing a two-child law for the United States and the creation of a “National Birth Control Administration” to supervise “operations and compliance” in his book, “The Case for Compulsory Birth Control.” He also suggested a “Reversible Fertility Immunization” for “all American citizens above the age of 10.” Chasteen was a national member of Zero Population Growth and Planned Parenthood Association of Greater Kansas City. 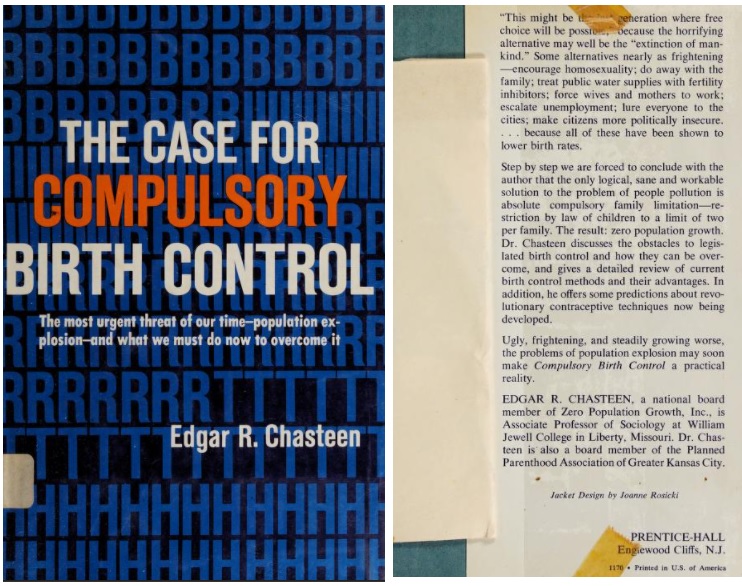 In 1972, as president of the American Association of Planned Parenthood Physicians (AAPPP), Donald Minkler also suggested the use of force. “We hope that the restraint of population growth can come about through voluntary means: but, if it does not, involuntary methods will be used,” Minkler stated. AAPPP, founded by Alan Guttmacher in 1963 as the education arm of Planned Parenthood, eventually morphed into the Association of Reproductive Health Professionals.

It is important to understand that eugenic policies have been at the root of abortion and population control organizations for a very, very long time, and little has changed except the marketing. Today, these organizations do their best to hide their agenda under the language of “empowerment” for women.