With the topic of America’s history in racism once again a focus in the news, a fake image of Planned Parenthood founder Margaret Sanger speaking to the Klu Klux Klan has been circulating online. While the image is not real, what is quite real is the fact that Sanger, a proponent of eugenics, spoke to a meeting of the women’s branch of KKK in 1926.

The event took place in Silver Lake, New Jersey, and Sanger described in it in her autobiography:

I accepted an invitation to talk to the women’s branch of the Ku Klux Klan…. I saw through the door dim figures parading with banners and illuminated crosses…. I was escorted to the platform, was introduced, and began to speak…. In the end, through simple illustrations I believed I had accomplished my purpose. A dozen invitations to speak to similar groups were proffered. (Margaret Sanger: An Autobiography, P.366)

Sanger called that event “one of the weirdest experiences I had in lecturing.”

That being said, the image below, which purports to show Sanger giving that speech before her adoring Klan supporters is not authentic. The image was part of a blogger’s photo contest. 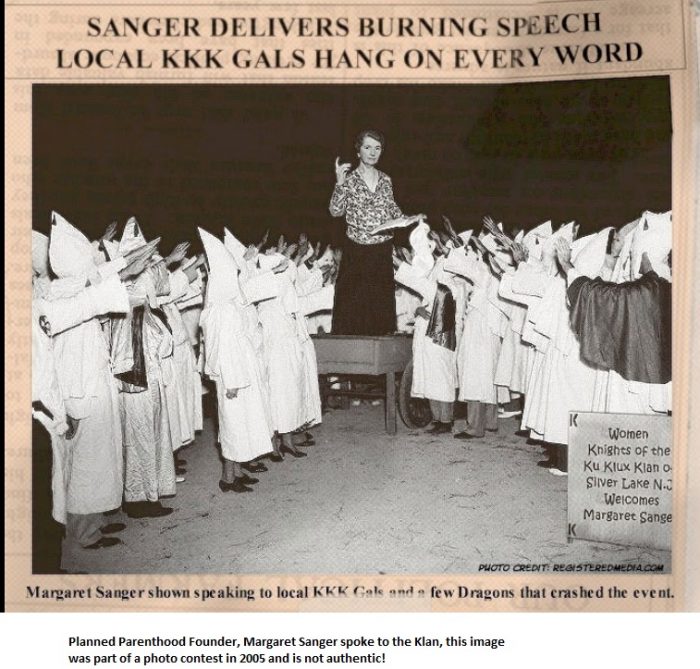 Sanger and Klan image was part of blog photo contest in 2005 — it is not authentic.

The Sanger/Klan fake was published by the “Margaret Sanger Blog Spot” which held an annual photo contest because, in the blog’s words, “The Big Abortion Industry still holds Margaret Sanger out as an icon. Artwork is one more important ways to promote the truth about Margaret Sanger.”

The blog’s instructions for the contest were to “commemorate Sanger at the Klan rally in unique artistic ways,” including “modern interpretations of Sanger speaking to the Klan.”

But Sanger’s views were so outrageous in and of themselves that there is no need to circulate inaccurate depictions, which could lead to attempts to discredit her meeting with the Klan altogether.

Sanger has a very controversial history as an enthusiastic proponent of eugenics and a member of the American Eugenics Society. This philosophy not only fed her work within the Planned Parenthood movement, but her lesser known advocacy of euthanasia as well. The organizations Sanger founded, such as The American Birth Control League (ABCL) and later, Planned Parenthood, also have ties to many eugenics proponents. 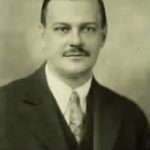 One of those connections was a man by the name of Clarence Cook Little.

He was named the director of The Jackson Laboratory and later accepted a position as scientific director of the Tobacco Industrial Research Committee. He was also a member of the American Academy of Arts and Sciences and the National Academy of Sciences.

Sadly, Little was also president and founding member of The American Eugenics Society, as well as a board member of Margaret Sanger’s American Birth Control League. He was also the Birth Control Federation President, and sat on the previously mentioned American Euthanasia Society board.

Little was also listed on the 1938 Committee for Planned Parenthood. 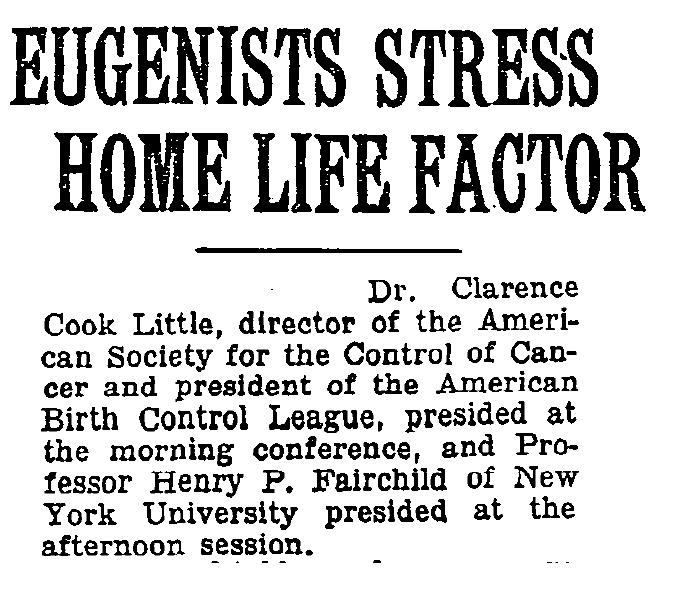 There is a building (and a bus stop) on the University of Michigan campus named for Clarence Cook (C.C.) Little. He was the University’s president in 1925, and an outspoken “scientific” racist and eugenicist, who believed that “inferior” races should undergo involuntary sterilization. I often sat at the bus stop bearing his name while I waited to go to class. Little would have hated that.

Despite the merit of these denouncements, few have expressed concern over Little’s ties to Planned Parenthood’s history.

Another interesting eugenics connection to both Sanger and Planned Parenthood is a woman by the name of Hilda Kahlert Cornish. Hilda Cornish chaired the Arkansas Eugenics Association. According to a 1986 article in an Arkansas newspaper, Cornish received much of her counsel directly from Margaret Sanger. In fact, the Blytheville Courier Press notes that the sons of the two leaders were roommates at Yale University.

The documentary film on eugenics, Maafa21 (clipped below) details disturbing connections the Arkansas Eugenics Association had to Planned Parenthood:

From its beginning, Planned Parenthood always had powerful ties to the American Eugenics community. In fact, in many places they were often one in the same.

For example, when the first birth control clinic was opened in Arkansas, it was operated by the Arkansas Eugenics Association and overseen by a woman named Hilda Cornish.

Later, the Arkansas Eugenics Association would become the Arkansas State Affiliate of Planned Parenthood and Cornish would be named its executive director. 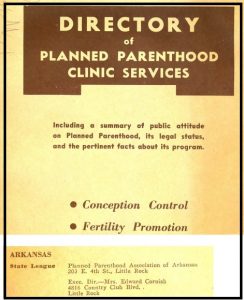 She is also listed as a member of the American Eugenics Society.

According to the Encyclopedia of Arkansas:

In the summer of 1930, [Cornish] met Margaret Sanger… The two developed a friendship maintained by correspondence and occasional meetings. During that summer, Cornish visited Sanger’s Clinical Research Bureau in New York, and she launched the Arkansas birth control movement later that same year.

At Cornish’s initiative, a group of physicians, business and religious leaders, and women active in civic work formed the Arkansas Eugenics Association (AEA)…. In early 1931, the association opened the Little Rock Birth Control Clinic in the basement of Baptist Hospital…. Cornish also worked with the National Committee on Federal Legislation for Birth Control.

The online historical site added that in 1942, The Arkansas Eugenics Association changed its name… to the Planned Parenthood Association of Arkansas.

Authors of the book, Hidden Histories of Women in the New South, noted that the “first report of the Arkansas Eugenics Association stated that the Little Rock clinic registered 161 White women during its first eleven months of service.”

The book‘s authors reveal that the clinic “directed its efforts towards poor women only,” yet they imply a prejudice against Blacks by writing that “African American women were not invited to the [Arkansas Eugenics] clinic from its start in 1931.”

The authors add that “until 1937, only white women actually had the opportunity to receive services” and the organization “held separate hours for white and African American women.” The book also notes that “most of [the American Birth Control League’s] clinics were segregated.” The ABCL later changed its name to Planned Parenthood.

Planned Parenthood’s beloved founder Margaret Sanger reached out to many people who saw Blacks as less than equal, and this includes the Klan and the Eugenics movement.

Today, many believe that Sanger’s racist ideologies have penetrated much of her work. And even without an image to document Sanger’s speech before the Klan, Planned Parenthood knows her history, as revealed in her own autobiography.

Instead of repudiating Sanger, taxpayer-funded Planned Parenthood honors her as a hero, naming their most prestigious award after her. It’s despicable.