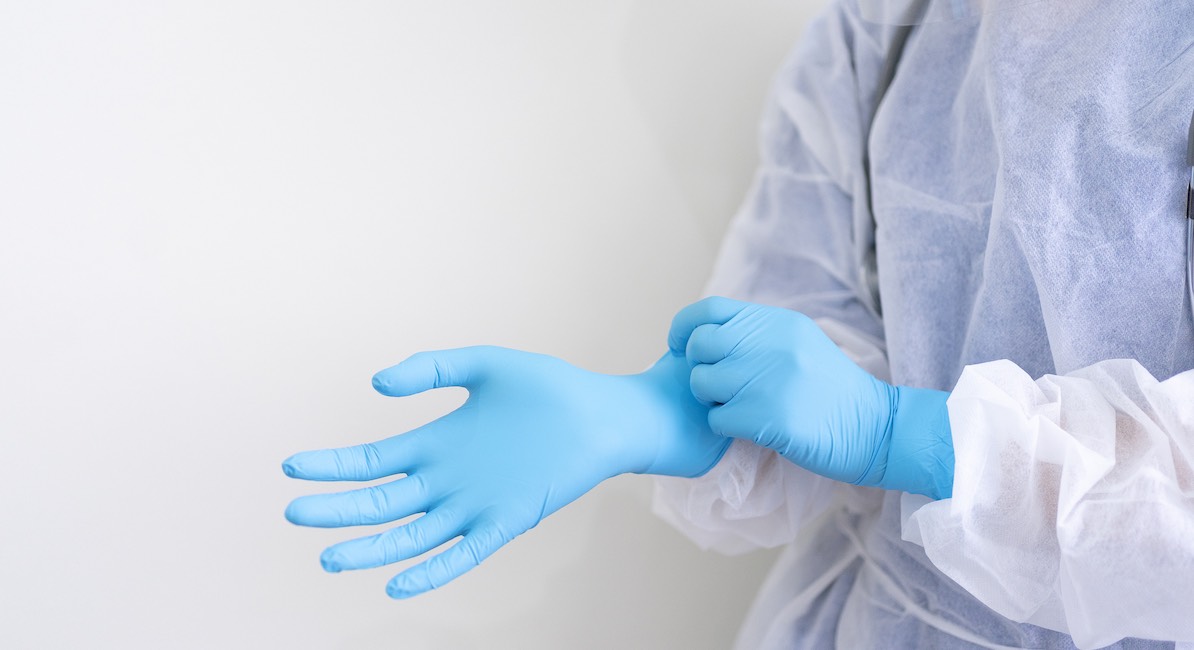 The American College of Obstetricians and Gynecologists (ACOG) was not always supportive of abortion, but the shift to full-blow abortion advocacy began shortly after its founding in 1951. The organization’s helm was quickly taken by those involved with Planned Parenthood, the “endemically racist” Population Council, and the American Eugenics Society (AES). By 1968, its leadership had moved to approve the American Law Institute’s Model Penal Code to decriminalize abortion. By then, the ACOG was led mostly by men connected to eugenics-based organizations.

Below is a listing of some these ACOG leaders, who were strong proponents of eugenics and population control:

William F. Mengert, MD was one of the founders of ACOG in 1951 (known then as the American Academy of Obstetrics and Gynecology) and was the ACOG’s president from December 14, 1954, through December 13, 1955. He wrote a book on ACOG’s history in which he acknowledged his own connections to Planned Parenthood of Chicago. He became a member of that Planned Parenthood board by 1970.

Following his term as ACOG president, in 1963, the Ford Foundation appointed Eastman a consultant to their department on population programs. The foundation funneled millions to the International Institute for the Study of Human Reproduction, which became the Center for Reproductive Sciences, the Center for Human Male Infertility, and the Center for Population and Family Health. This institute was run by another ACOG president, Howard C. Taylor, Jr., who served with Eastman in 1964 on a Population Council committee.

Taylor was a former chairman of obstetrics and gynecology at the Columbia University College of Physicians and Surgeons and the “founding director of the Institute for Human Reproduction at Columbia, the first major scientific institute dedicated solely to research into reproduction and family planning,” according to the New York Times. “He also served as president of the American Public Health Association and the American Association of Planned Parenthood Physicians [AAPPP], as well as editor in chief of The American Journal of Obstetrics and Gynecology.” Taylor previously served on the Medical Board of Margaret Sanger’s American Birth Control League (ABCL), which later became Planned Parenthood.

According to archives at Columbia University, Taylor “[…] met frequently with… officials of the Ford Foundation, who provided initial funding for the Institute; and with officers of other foundations. He worked closely with the Population Council, Planned Parenthood, and other organizations working in the field.”

In 1942, Taylor served as chairman of a conference on abortion under the auspices of the National Committee on Maternal Health, Inc., held at the New York Academy of Medicine, according to the 1964 book, “Criminal Abortion” by Jerome E. Bates and Edward S. Zawadzki. Taylor would later lead a Committee on Human Reproduction as part of the National Research council which had ties to Planned Parenthood.

In 1954, Taylor received the Lasker Award from the Albert and Mary Lasker Foundation, which described Taylor a “friend of Planned Parenthood.” Just two years later, Taylor was listed as a member of the American Eugenics Society according to ACOG president William F. Mengert, MD in his 1971 book on ACOG’s history. In 1973, the AES changed its name to the much-less-controversial-sounding Society for the Study of Social Biology.

By 1957, Taylor was serving on the Population Council’s Medical Advisory Committee alongside Alan F. Guttmacher, who later became head of Planned Parenthood. Taylor was still on the board in 1964.

According to author Matthew Connelly in his book, “Fatal Misconception,” Taylor also served on a medical committee for the International Planned Parenthood Federation (IPPF) and was credited with bringing in millions of dollars from the Ford Foundation for the study of the IUD.

Population Council Board 1957 shows Alan Guttmacher on Medical Advisory Board

Taylor authored a paper with the Population Council’s fourth president, Bernard Berelson, in 1968. A year later, Berelson published an article in the Population Council’s journal, “Studies in Family Planning,” suggesting that if voluntary methods of birth control were not successful, it may become necessary for the government to put a “fertility control agent” in the water supplies of “urban” neighborhoods. Taylor remained active with the Council until at least 1974.

Also in 1968, Planned Parenthood VP Fredrick Jaffe founded PPFA’s Center for Family Planning Program Development, which later became the Guttmacher Institute (Planned Parenthood’s research arm). It was funded in part by the Rockefeller Foundation. Taylor sat on their board.

Taylor’s tenure with the ACOG reportedly included the creation of an ad hoc committee to study therapeutic abortion and sterilization laws. 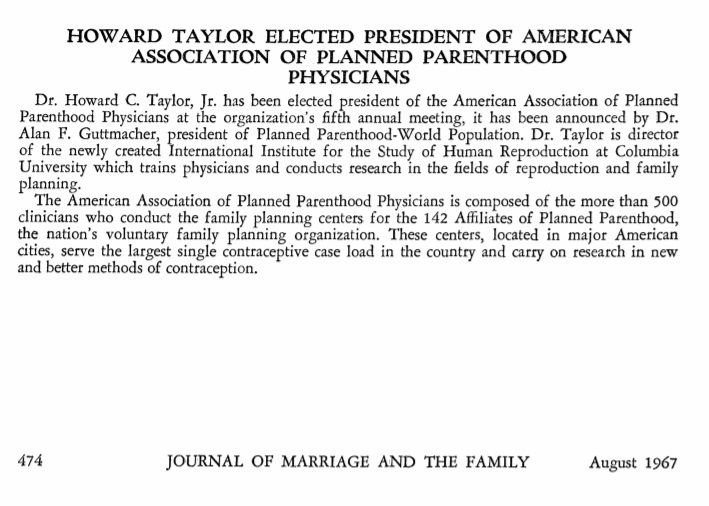 Duncan E. Reid, MD followed Taylor as ACOG president in 1967, but according to researcher Nancy Aries, who authored a study on ACOG’s abortion evolution, Reid held the position that the “medical profession should not become actively involved in debates about social mores.”

Willis E. Brown led the ACOG from May 8, 1968, to January 8, 1969, and had previously received a grant from the Rockefeller-funded Population Council for research he conducted years prior. Brown also served alongside Alan Guttmacher as associate editor of “Fertility and Sterility,” the official Journal of  the American Society for the Study of Fertility.

Under Brown’s tenure, the ACOG’s statement on therapeutic abortion was introduced and accepted and a committee expressing a “minority view was formed,” according to the history of ACOG (1951-2017).

By 1969 Russell had “led medical professionals in their fight to liberalize the California abortion law in 1967,” the Los Angeles Times noted upon his death. Russell was also on the board of Planned Parenthood of Los Angeles for several years.

Russell served as ACOG president for a second term from May 21, 1973, to April 20, 1974, where he developed closer contacts with the U.S. Congress for comments on topics such as family planning and abortion.

Robert A Ross took the reins of ACOG between April 30, 1969, and April 16, 1970. During his tenure, abortion was discussed at the Annual Clinical Meeting in Florida. He is listed as a member of Planned Parenthood’s National Medical Council along with Taylor, according to this 1945 Planned Parenthood brochure, which also shows the American Eugenics Society listed as a supporter. 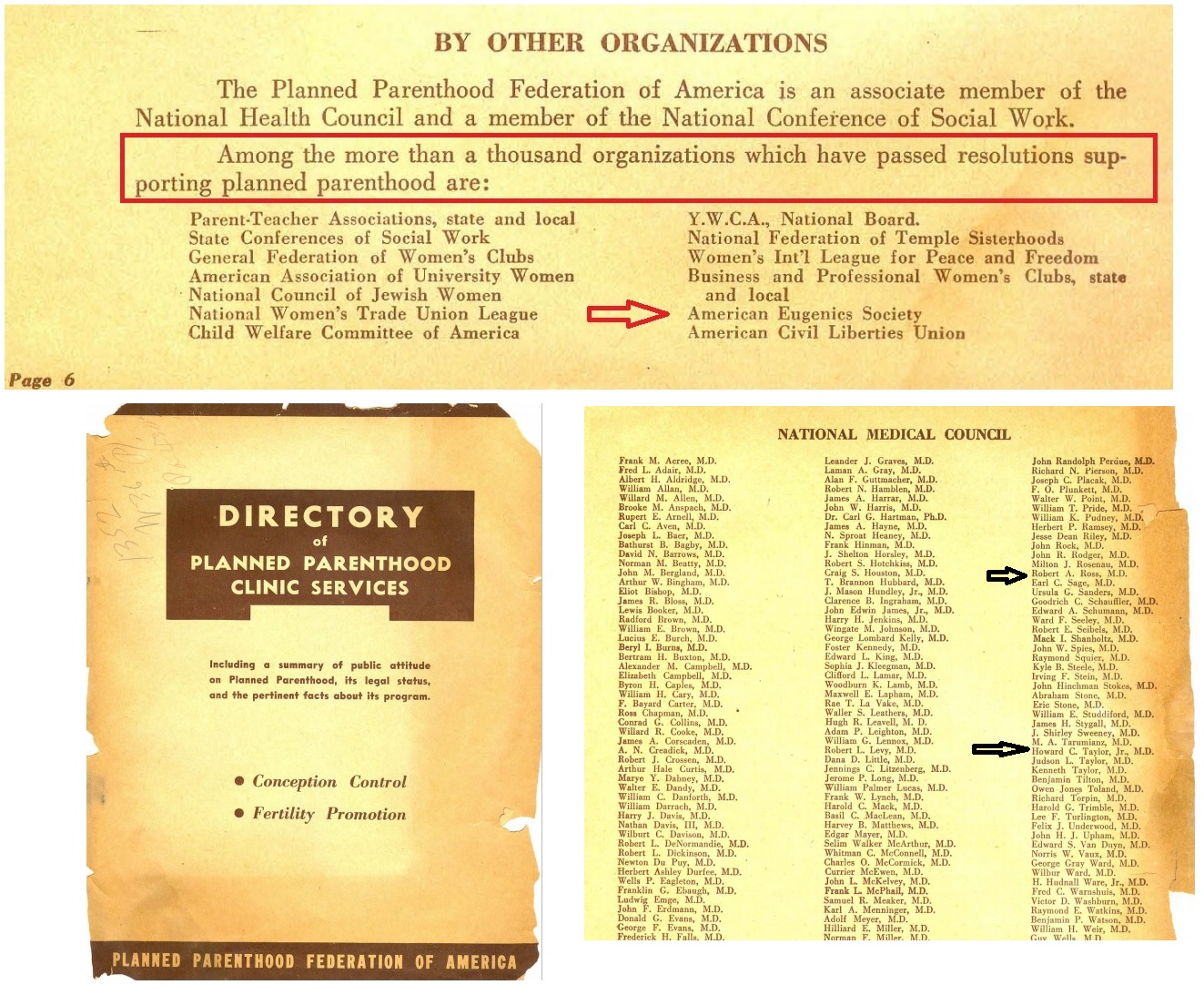 Frederick J. Hofmeister served as ACOG president from April 30, 1974, to May 6,1975 and also served on the Medical Advisory Committee for Planned Parenthood of Milwaukee.

In a nutshell, the leadership of the ACOG has been inextricably linked with the largest abortion corporation in the nation for decades. The organization is anything but impartial about abortion and today continues to work closely with the abortion industry, granting it cover against nearly every proposed abortion safety regulation or restriction.

The ACOG has a history of support for eugenics and population control. How, then, can it ever be trusted as an impartial authority that seeks the good of women and children?

Editor’s Note: Read part one in this series, “Exposing ACOG: The medical organization that supports and covers for the abortion industry.”