According to a recent internal audit reviewed by Buzzfeed News, Planned Parenthood Federation of America (PPFA), which oversees over 50 affiliates in the U.S., has a racism problem. The assessment was “conducted…with 64 current and 12 former Black Planned Parenthood employees,” many of whom remained anonymous out of fear of retribution, and was presented by Anti-Oppression Resource and Training Alliance (AORTA) to Planned Parenthood’s ‘Network of Black Associates.’ The assessment pertained only to employees of PPFA, and revealed systemic racism within the eugenics-founded, abortion-focused organization.

Black employees at PPFA “have been held to a different standard than the organization’s white employees and that they are often expected to work more and given less leeway,” Buzzfeed News said AORTA’s assessment concluded. The news outlet added that PPFA’s treatment of Black employees “does not line up with its social justice–driven mission.” 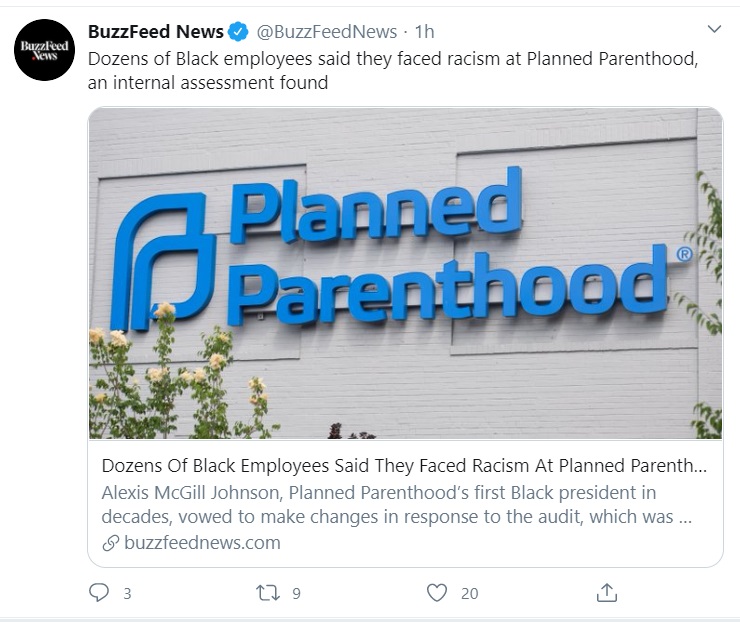 PPFA’s head of HR, Dannette Hill, put the onus on PPFA leadership, telling Buzzfeed News, “It’s not possible for you to know or understand the thousands of conversations we have in a year with leaders about their sh*t, about their behavior, about people on their staff and their behavior,” she said. “There is a protection in this organization that must be permeated by us as a collective body about how far even HR can go in invoking consequences on someone for the way that they behave….” 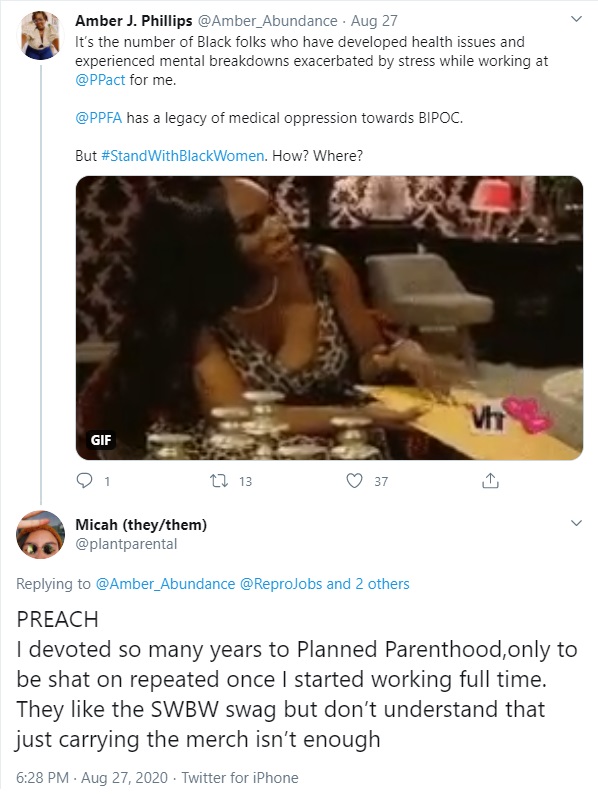 Planned Parenthood criticized because of accusations of racism (Image: Twitter)

Planned Parenthood was founded by Margaret Sanger, a one-time Ku Klux Klan speaker and white supremacist-allied advocate of requiring “licenses to breed.” Sanger added eugenicists like Lothrop Stoddard — a journalist and Exalted Cyclops of the Massachusetts chapter of the Ku Klux Klan — to her American Birth Control League board.

In June 2020, hundreds of past and current Planned Parenthood employees published an open letter claiming the corporation is steeped in racism and “white supremacy.” Multiple additional staffers have made similar claims over the years. Recently, Buzzfeed documented additional accusations of racism from “26 employees at Planned Parenthood affiliates and the national office of NARAL, as well as 16 employees of other reproductive rights organizations.”

After that expose, Planned Parenthood president, Alexis McGill Johnson tweeted in part that, “I hear you, I see you, I feel you, and I’ve been there too… We know white supremacy limits sexual and reproductive health. We must fight to eradicate it @PPFA.”

Supporters immediately called out McGill Johnson, with one asking, “But what will you actually do about it? The actions described in the @BuzzFeed article aren’t just mean or unfortunate events, they are illegal. For once, heads need to roll.”

Another tweeted that the apology wasn’t showing up on PPFA’s main Twitter pages: “Also…it’s insulting that the main @PPact  and  @PPFA accounts aren’t lifting up this “apology”. Hundreds of thousands of people won’t even see this.”

AORTA staff member Autumn Brown acknowledged to Buzzfeed News that despite the organization’s hype about reproductive justice, Planned Parenthood’s mothership organization employed few Black people — which Buzzfeed claimed comprise about 18% of PPFA’s 556 employees. Staffers who spoke to Buzzfeed News claimed that many people of color actually hired by Planned Parenthood later left because of how they were treated.

According to Buzzfeed News, Planned Parenthood’s Black employees felt “over-scrutinized” and “placed under greater scrutiny than white colleagues” and were “expected to put in extraordinary hours of work” while “white employees were given more leeway.” They also claimed Planned Parenthood had “uneven promotion and hiring practices,” and that Black employees felt their work roles were assigned due to “racialized assumptions.”

“I imagine that little of it will be surprising to you that the collective experience of Black staff at Planned Parenthood is as heavy as it is,” AORTA’s Brown stated, adding that there is a “real sense that Planned Parenthood’s externally stated racial equity values don’t align with its internal commitment to supporting Black employees because the feedback from … Black staff has not been meaningfully addressed for years and years.”

AORTA also noted something termed the “childification” of Black and brown employees. This, AORTA’s Brown explained, is “similar to the concept of microaggressions” and means the “persistent treatment of Black people as children or adolescents who are unable to accomplish work independently, and viewed uniformly, such that they cannot be differentiated from one another.”

“Brown explained, and included white employees confusing their Black colleagues’ names, or having their appearance commented on and their hair touched without consent,” Buzzfeed wrote, treating the colleagues as an “object to be viewed and commented on, as though they are not there.”

Buzzfeed’s exposé was published mere hours after Yelp announced its consumer alert to stand against racism. “In the last few months, we’ve seen that there is a clear need to warn consumers about businesses associated with egregious, racially-charged actions to help people make more informed spending decisions,” Yelp tweeted. Twitchy then documented multiple calls for Yelp to flag Planned Parenthood. However, as of the publishing of this article, that has not occurred.

AORTA, hired by Planned Parenthood to conduct the assessment, claimed that PPFA is “is turning and facing the problem of white supremacy, which is as old as this country,” and is “serious about combating systemic racism and anti-Black racism.” Yet staffers within Planned Parenthood were not so optimistic. Many told Buzzfeed that while they are glad the assessment took place, “they don’t trust it at large to actually make significant change unless it is held publicly accountable.”

“This assessment was great but, what’s next? This assessment took three years to do. Are we gonna have to wait another three years before they implement any policies?” a Planned Parenthood employee asked Buzzfeed. “I don’t trust them to make these changes, because Planned Parenthood is filled with people who, because they do work in reproductive rights, think they can’t be racist or prejudice, but keep saying and doing racist things, and nothing is being done about it.”