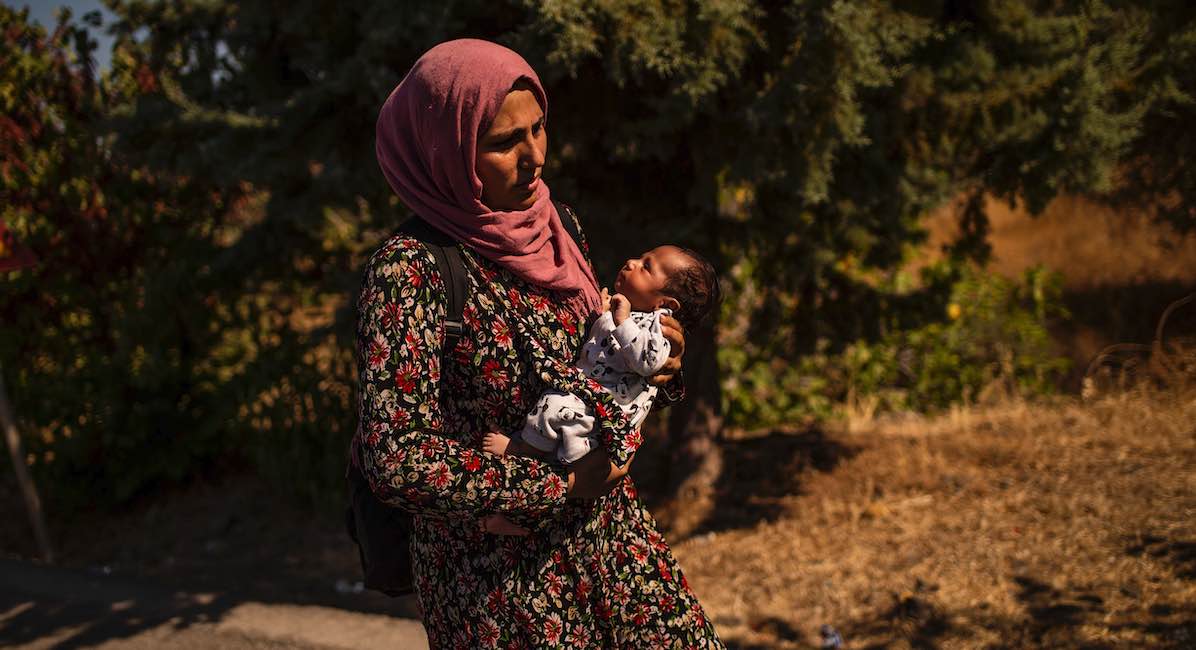 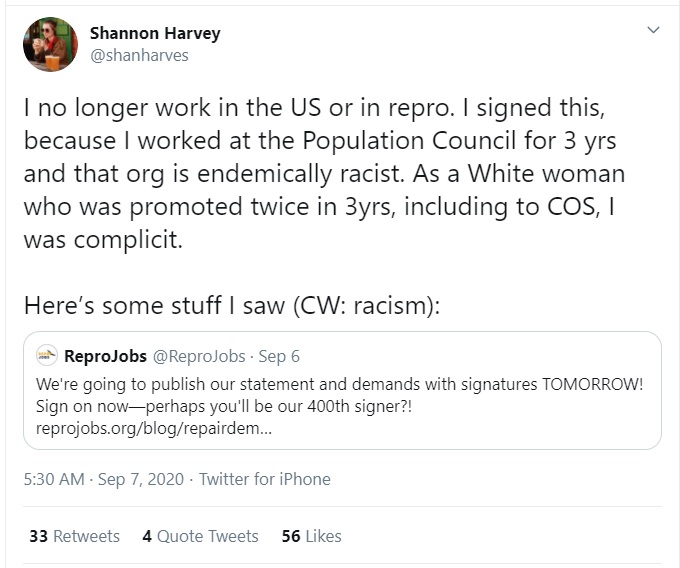 Population Council accused of being endemically racist according to Shannon Harvey (Image: Twitter)

According to Harvey’s LinkedIn page, she held several positions with the Population Council between 2017 and 2019, including as Associate Director of Philanthropy and Chief of Staff to the President. Harvey’s now-archived website confirms this, and her Twitter account includes pictures of Population Council leaders at global events she also allegedly attended.

“I was in a meeting for this event where Danish officers stated that their govt was only interested in family planning because of immigration,” tweeted Harvey. “We went ahead & the President (knowing this) went to Denmark to solicit funding 2 months later.”

Harvey then admitted that she and the Population Council understood that some of their “supporters” were motivated by racism. She tweeted the image below of correspondence she allegedly sent to “Julia” (likely Julia Bunting, president of Population Council), after an alleged researcher asked for her help “raising funds for a project to get conservationists talking about population reduction to fight climate change.”

“As you well know… we have some supporters who hold frankly racist views about the link between population growth and climate change, and I feel strongly that we should be cautious that our advocacy doesn’t give those people fodder,” Harvey wrote in part.

“Three months later I was still being pressured to support that project,” Harvey tweeted. 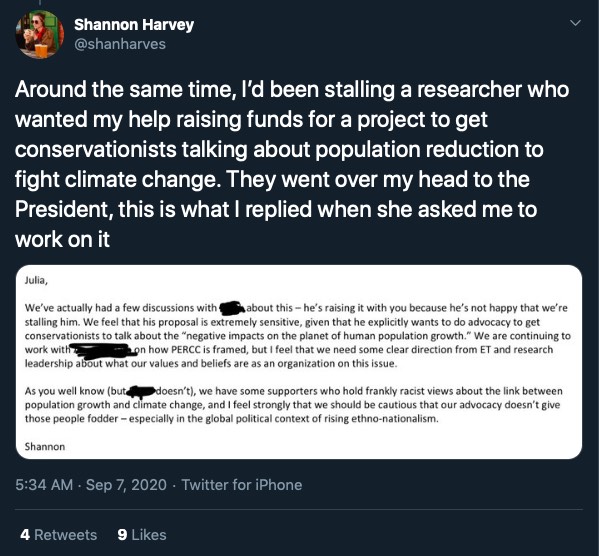 The “project” identified by Harvey is “Population, Environmental Risk, and Climate Change (PERCC),” launched in 2018. According to a Population Council document, the initiative “generates rigorous research to better understand how climate and the environment impact people, and how people, in turn, impact the climate and their environment. ” PERCC was launched with a combination of small grants from external donors and a special allocation from the Population Council’s capital fund

In response to her concerns, Harvey claims the VP “basically” told her “it was in line with the strategy and to suck it up.”

“I repeatedly told the President and senior staff that I believed our position on family planning and climate change was racist and open to exploitation by white supremacists, she tweeted.

READ: The Population Council, which brought the abortion pill to the U.S., has a shocking history that’s nothing to celebrate 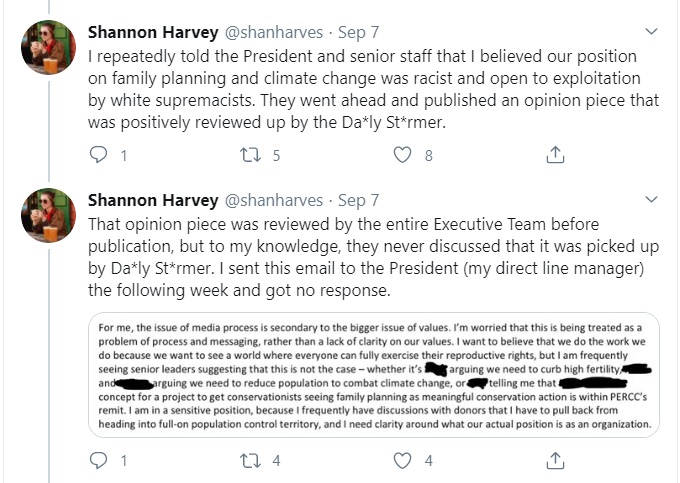 Population Council accused of being racist according to Shannon Harvey 4 (Image: Twitter)

“I want to believe that we do the work we do because we want to see a world where everyone can fully exercise their reproductive rights, but I am frequently seeing senior leaders suggesting that this is not the case – whether it’s [redacted] arguing we need to curb high fertility, [redacted] and [redacted] arguing we need to reduce population to combat climate change, or [redacted] telling me that [redacted] concept for a project… is within PERCC’s remit. I am in a sensitive position, because I frequently have discussions with donors that I have to pull back from heading into a full-on population control territory, and I need clarity around what our actual position is an an organization,” Harvey wrote.

Harvey doubled down on her accusations, claiming a VP of the Population Council expressed a concern about African immigration into Europe.

“At a donor event a VP made this case for family planning: ‘There’s widespread concern about 4bn people in Africa: poverty, environment, famines… With 1bn Africans, immigration is more than [Europe] thinks they can handle. With 4bn people it will be a much bigger problem,'” she tweeted.

While Harvey expressed regret about her complicity with Population Council, she confessed that her Twitter thread only revealed “a fraction of what I was party to in my time at PopCouncil.” 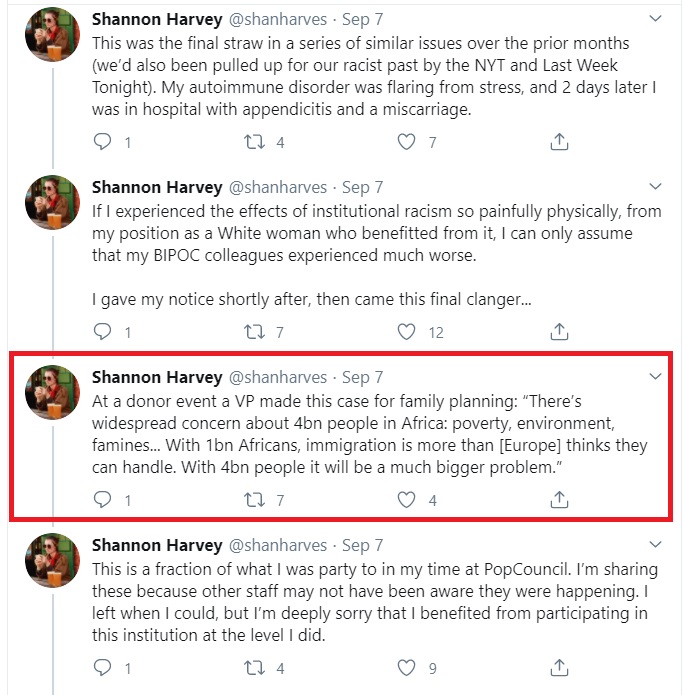 Although Planned Parenthood’s past is steeped in racist eugenics, hundreds of Planned Parenthood staffers recently exposed the fact that the corporation has not only a history but a “present steeped in white supremacy.” NARAL Pro-Choice America, which has staunchly defended Planned Parenthood’s eugenicist founder Margaret Sanger, also recently came under fire by staffers for alleged racism, as did the Feminist Majority Foundation and the National Organization for Women (NOW).

Abortion industry insider Dr. Daniel Grossman publicly admitted that groups in which he is an active leader, such as the University of California San Francisco, have “created and upheld structures that limit the success of Black and Brown scholars and staff.” According to an archived CV, Grossman previously “held the position of Health Specialist at the Population Council in Mexico City.