Abortion pills comprised nearly 44% (43.7%, to be exact) of abortions reported to the Centers for Disease Control and Prevention (CDC) in 2019, based on data from just 42 reporting areas. According to the CDC, the data “excludes 10 reporting areas (California, District of Columbia, Illinois, Louisiana, Maryland, Massachusetts, New Hampshire, New York State, Pennsylvania, and Wisconsin) that did not report, did not report by weeks of gestation, did not meet reporting standards, or did not have medical abortion as a specific category on their reporting form.”

Therefore, the true abortion numbers are much higher than reported. 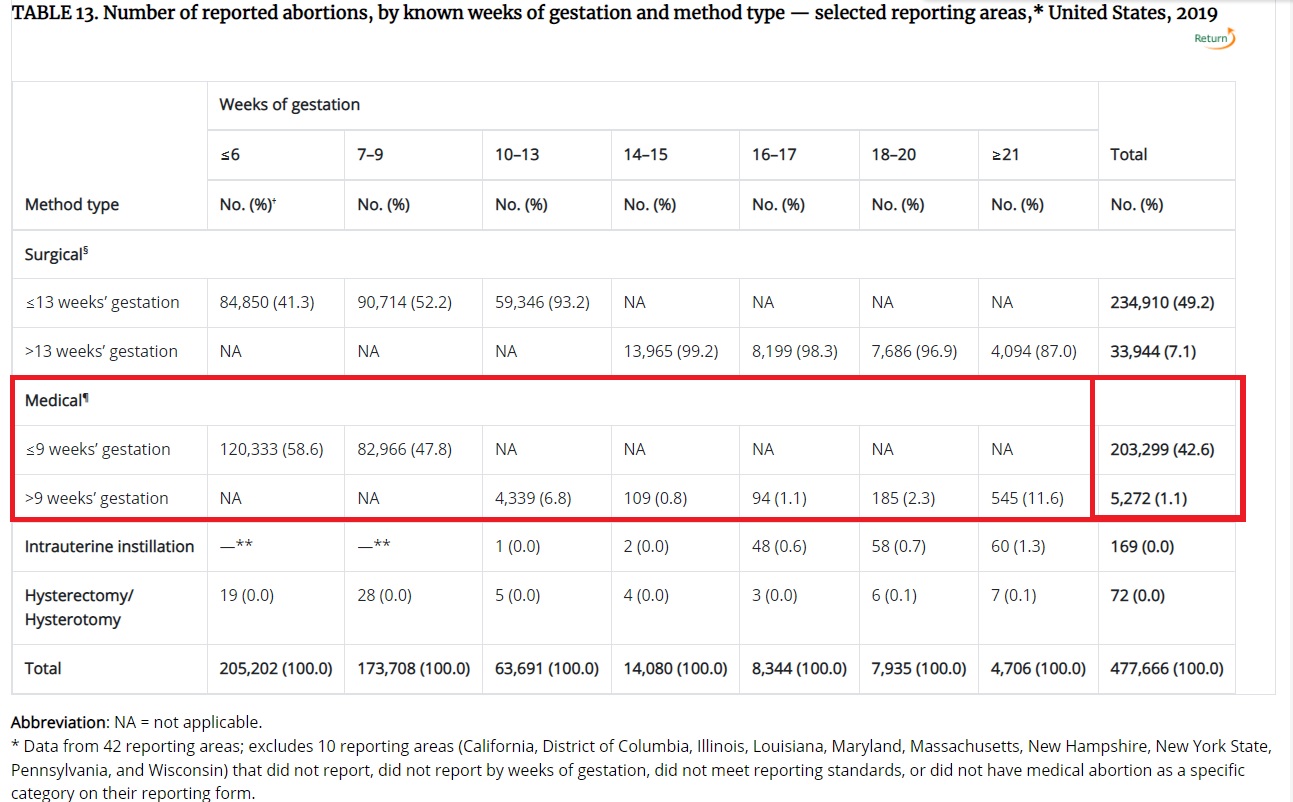 Data published by Planned Parenthood’s former “special affiliate,” the Guttmacher Institute, which tends to collect more comprehensive data than the CDC, has not been updated since  2017.

However, in that year, Guttmacher estimated that the abortion pill was used for nearly 40% of all abortions.

Live Action News estimates that the abortion industry is grossing nearly $200 million annually in abortion pill sales — twice as much money as initially projected — with Planned Parenthood alone taking in approximately half of the sales.

A June 2021 report by Kaiser Family Foundation (KFF) states that while abortion pill manufacturer “Danco Laboratories does not make the cost of Mifeprex public, providers report that Mifeprex costs them around $90 a pill.”

In 2000, the FDA approved the abortion pill Mifeprex (mifepristone) to be used in a regimen with the drug misoprostol.

By April 2011, due to several adverse events reports, the FDA determined that a safety system known as REMS was necessary for mifepristone. In 2019, the FDA approved the generic manufacturer of the abortion pill: GenBioPro, Inc.

A recent analysis of adverse events reports (AERs) submitted to the FDA by abortion pill manufacturer Danco revealed that abortion pill clients experiencing a complication are more likely to receive care from an emergency center than from the abortion facility where they obtained the pills.

The results of a recently released Telabortion study, which implemented more stringent safety requirements than would be seen in normal use, revealed that 6% of “known outcomes” from the abortion pill were severe enough to result in emergency room or urgent care visits. That number appears to mirror data from the UK.

In the U.S., potentially 20,380 women per year are seeking care at an ER or urgent care facility after taking the abortion pill.

However, a separate study which analyzed Medicaid data within the 17 states that allow taxpayer funded abortions found that the rate of abortion-related ER visits for chemical abortions increased 507% from 2002-2015.

As of the writing of this article, the abortion pill is under an FDA safety program called the Risk Evaluation and Mitigation System (REMS), which the FDA can require “for certain medications with serious safety concerns.”

Despite these potentially serious incidents, under the leadership of then-FDA Commissioner Robert Califf in 2016, the FDA removed the requirement that Danco Laboratories and GenBioPro report abortion pill complications — and instead must only report deaths. The FDA also ruled that the abortion pill should remain under the REMS safety guidelines.

Challenges to the REMS

Today, the abortion industry is seeking to lift the REMS on the abortion pill and expand its use through self-managed and DIY abortion. This process puts the responsibility of seeing the remains of the child and the disposal of “fetal remains” squarely on the teenager or woman taking the pills.

Additional schemes by abortion insiders involve committing abortions past the approved FDA gestational age limit, knowing the failure rate of the abortion pill increases with gestational age. In addition, they have proposed “advanced provision” of the pills before pregnancy, promoting unregulated online abortion pill dispensaries, and even illegal distribution of the drug.

In 2017, the American Civil Liberties Union (ACLU) filed a case (Chelius v. Becerra) to challenge the REMS on behalf of Hawaiian doctor Graham T. Chelius. Then, in May 2020, the ACLU filed a lawsuit on behalf of the pro-abortion American College of Obstetricians and Gynecologists (ACOG) to suspend the FDA’s REMS during the COVID-19 pandemic.

In July 2020, U.S. District Judge Theodore D. Chuang placed the in-person safety requirement under a preliminary injunction during the COVID-19 pandemic. Then in April of 2021, the Biden Administration’s FDA temporarily enabled abortion pill distribution by mail during the COVID-19 pandemic. The following month (May of 2021), a motion to stay the Chelius case was enacted pending a final review by the FDA of the REMS.

More recently, on November 3, 2021, a status update was filed in the Chelius case, which indicated that the “FDA… anticipates completing its review by December 16, 2021” and the stay on the lawsuit was extended until January 14, 2022 to “give the Parties time to determine appropriate next steps in this litigation.”

Despite requirements that deaths be reported regularly to the FDA, as of the writing of this article, the latest published data on deaths from abortion pills was nearly three years old.

In December of 2018, the FDA reported 24 deaths associated with abortion pills since its approval but on December 16, 2021 the FDA published an updated “Post-Marketing Adverse Events Summary” revealing that as of June 30, 2021, that number has now climbed to 26.* The report also tragically reveals that the “estimated number of women who have used [abortion pill] mifepristone in the U.S. for medical termination of pregnancy through the end of June 2021 is approximately 4.9 million women.” (Read more at Live Action News here).

*Editor’s Note: FDA has received reports of serious adverse events in women who took mifepristone. As of June 30, 2021, there were reports of 26 deaths of women associated with mifepristone since the product was approved in September 2000, including two cases of ectopic pregnancy (a pregnancy located outside the womb, such as in the fallopian tubes) resulting in death; and several cases of severe systemic infection (also called sepsis), including some that were fatal. The adverse events cannot with certainty be causally attributed to mifepristone because of concurrent use of other drugs, other medical or surgical treatments, co-existing medical conditions, and information gaps about patient health status and clinical management of the patient. A summary report of adverse events that reflects data through June 30, 2021 is here.